The Sims 4 Gets Freaking Wizards

Meet Lucretia Sand, witch. She’s the Sim I made for The Sims 4’s latest magic-centric expansion. Puns aside, she’s the perfect character to explore the latest game pack, Realm of Magic.

Realm of Magic, which comes out tomorrow, is the latest game pack for The Sims 4. It adds a new area, new clothes, and the ability for your Sim to practise magic. Witches – or spellcasters, in the nomenclature of the game – work a lot like vampires. As you use magic and learn spells and potion recipes, you accrue points to level up your magic skill. Making potions, which requires hunting for specific ingredients, interested me from the start, so I grabbed some upgrades for my Sim that makes it easier for her to forage.

Learning spells is done through the Magic Realm, an area that’s accessible through a magic portal in the pack’s new world, Glimmerbrook. Hanging out in the Magic Realm is the real gem of this pack. It’s simply gorgeous. It’s a series of three floating islands in an expansive night sky, with waterfalls and foliage galore. 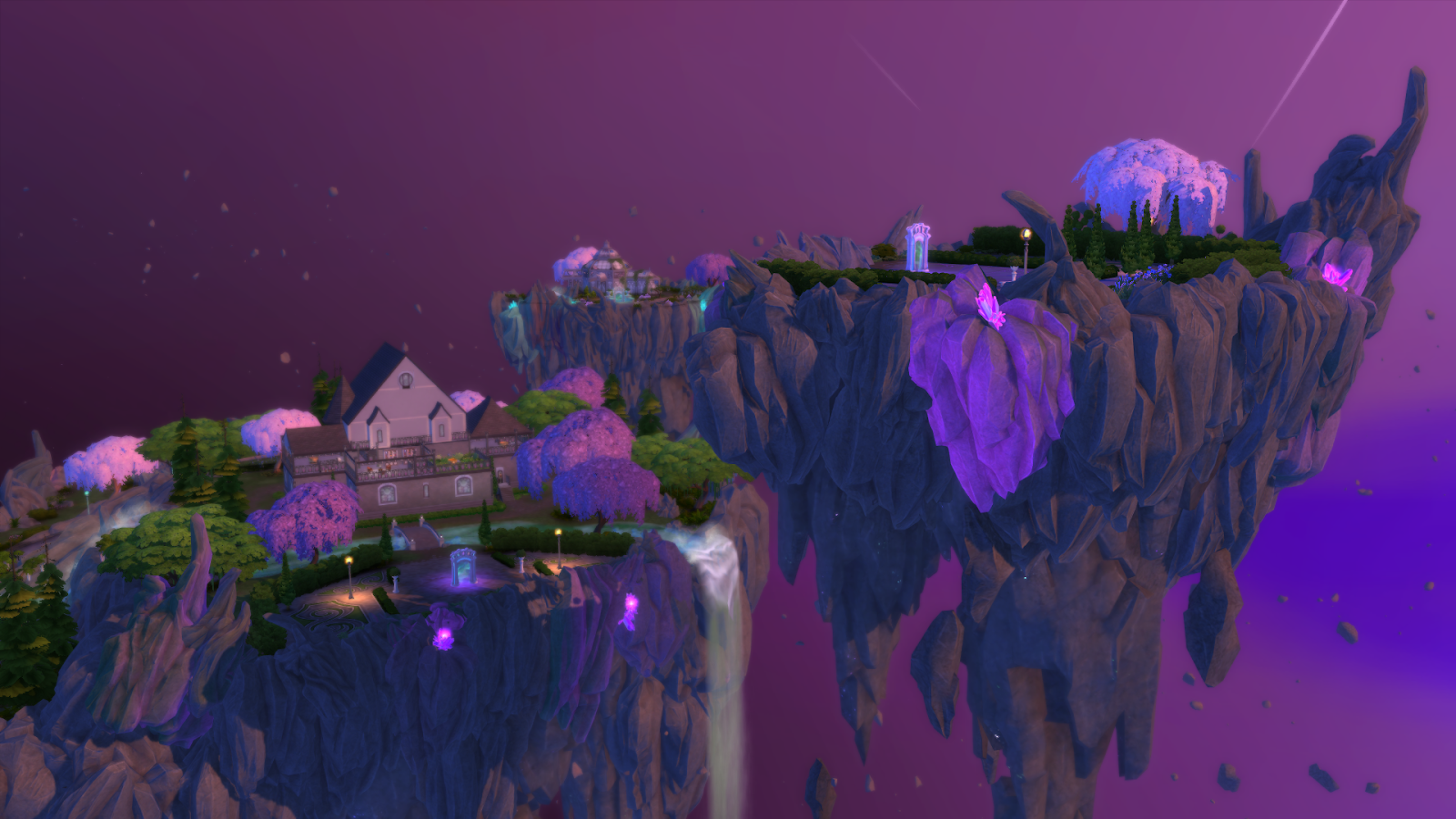 Because The Sims 4 doesn’t operate with a true open world like The Sims 3, sometimes large open areas like Glimmerbrook can feel a little bit like a ghost town. I’m not sure what wizardry they worked for this game pack, but not only is the Magic Realm beautiful, it’s a busy place. There’s a small area to buy magical materials through one portal, and a duelling ground through another, but the magic school is where pretty much all the action is. It’s where you can read magical books and practice potions and spells. You can duel other students. As soon as Lucretia reached the second level of being a spellcaster, she was getting calls for friendly duels all the time. She even won a few. 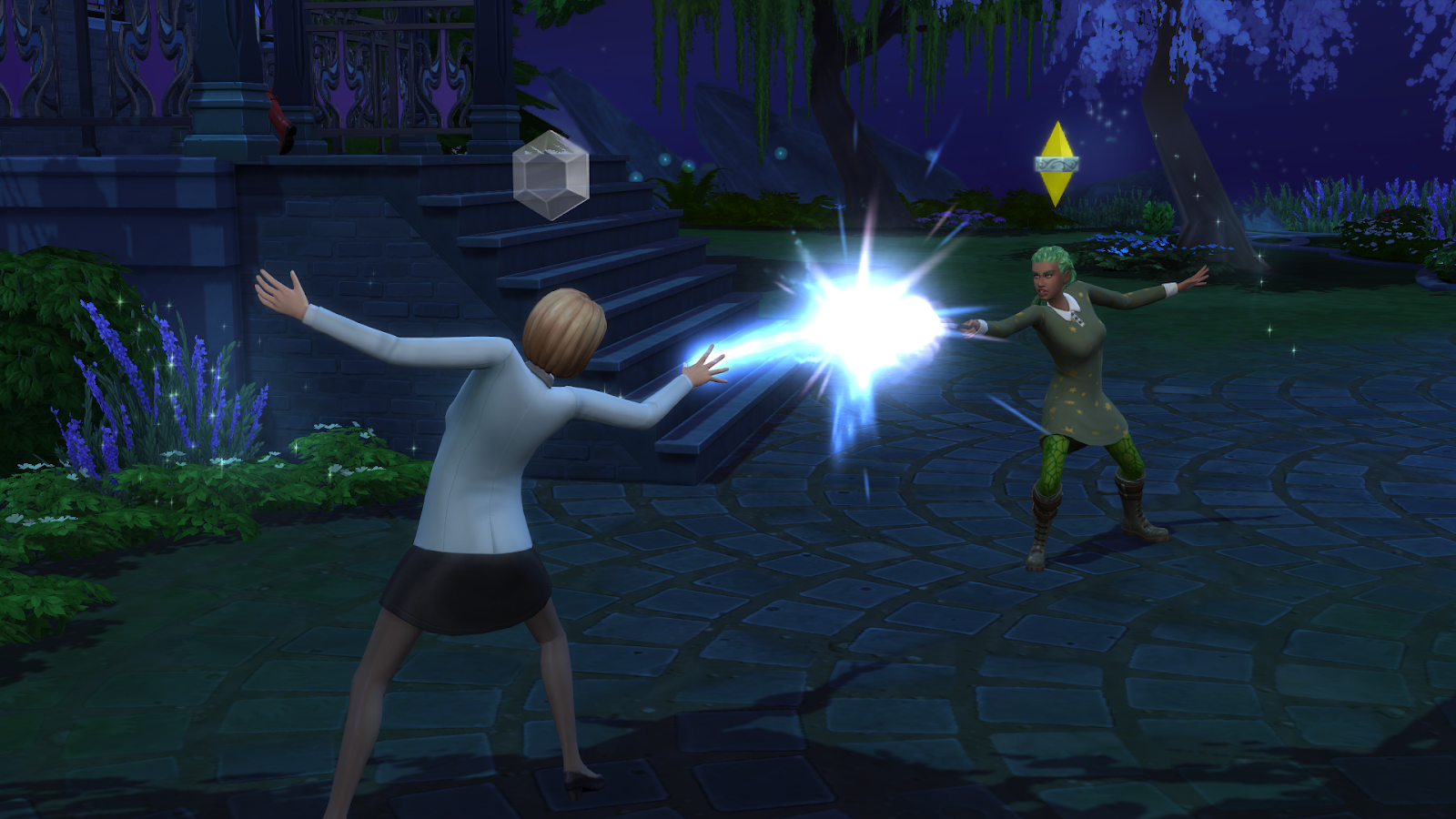 For the past few expansions and game packs for The Sims 4, I’ve been impressed at how well the past few expansions and game packs have been integrated into the rest of The Sims 4. In the past, some game packs have felt entirely segregated; vacation worlds are nice, and I’ve spent my fair share of time in Selvadorada, but that content is pretty much locked away unless I choose to access it. Magic, on the other hand, it clearly built to work within the confines of everyday life.

The kinds of magic you can do as a Sim reflect on fundamental aspects of the game. Early on, Lucretia learned Repairo, a spell for fixing broken objects. The next day, she set the hob on fire while making breakfast. Guess which spell saved us some simoleons? And that’s just the school of Practical Magic – there’s also Mischief Magic and Untamed Magic, as well as potions. Mischief Magic changes characters moods, and Untamed Magic causes changes to the environment by calling down lightning bolts or setting things on fire. All of these are things you can do without magic, but with the pack installed, magic becomes a tempting shortcut to getting what you want.

I haven’t played a mermaid since I got Island Living, though I think the expansion is well designed, and I get so irritated every time Vlad shows up to suck my Sims’ blood. As I think about what it will be like to play non-magical characters in a world where magic exists, however, I get excited. The kinds of stories you can tell in a world where magic exists aren’t just limited to people who learn and use magic. What if a Sim unknowingly marries into a spellcaster family, who has access to a secret magical world? What if I create a spellcaster who tries to keep up the masquerade in the non-magic world? There’s a load of narrative value beyond just the new magical mechanics in Realm of Magic. I’m just dying to get back to making Lucretia Sand (witch) slave over her potions.