You can find an explainer for just about anything these days. Search for the title of any game, movie, or TV show in recent memory plus the word “ending” and you’ll find a video of someone explaining it. It doesn’t even have to be an ambiguous work like Bloodborne: This summer’s Spider-Man: Far From Home, a movie that stops the action dead in its tracks more than once to explain what’s happening, has a very popular explainer on YouTube.

This is an environment uniquely hostile to a work bearing the name Blair Witch. Bloober Team’s new horror game available now on Xbox One and PC, is steeped in the world of a film that is seminal for its ambiguity, one that is still cited today because it arrived at a time where definitive-seeming solutions to every story were not yet the stock and trade of the internet. The Blair Witch Project became a phenomenon upon its release in 1999 partly because it was implied to be a true story. It was not, but it allowed nascent online communities to obsess over its ambiguity in a way that they had never done before.

It frankly seems impossible for anything to have the same kind of impact that The Blair Witch Project did 20 years ago. To its credit, the Blair Witch game doesn’t even try. Instead, it’s a mostly reverent, flawed tribute to that movie’s world, telling a story of its own while offering little in the way of definitive answers to the decades-old questions that the film posed.

Not that it would stop any of the explainers. Funny thing about those folks, though: Who says any of them are right?

Set in the same world as the Blair Witch films – 1999’s The Blair Witch Project, Book of Shadows: Blair Witch 2, and 2016’s Blair Witch – Blair Witch (the game) tells an original story while revisiting the allegedly haunted woods of Burkittsville, Maryland. It’s strongly implied that the events of the original film happened in this game, which is set two years later.

The uninitiated need not worry. For the most part, the extensive references to the wider world of Blair Witch mythology function as flavor for those who are fans of the films. Mostly, Blair Witch is concerned with being a scary video game about getting lost in the woods, and dealing with a possibly supernatural threat. It’s very good at that.

You play as Ellis, a former cop who joins the search for a missing boy, Peter Shannon. As a latecomer and a volunteer, you’re mostly there for backup, looking for things the search party might have missed. This means you’re mostly alone. Other than Bullet, your German Shepherd companion, your primary contact with others comes via radio or mobile phone. 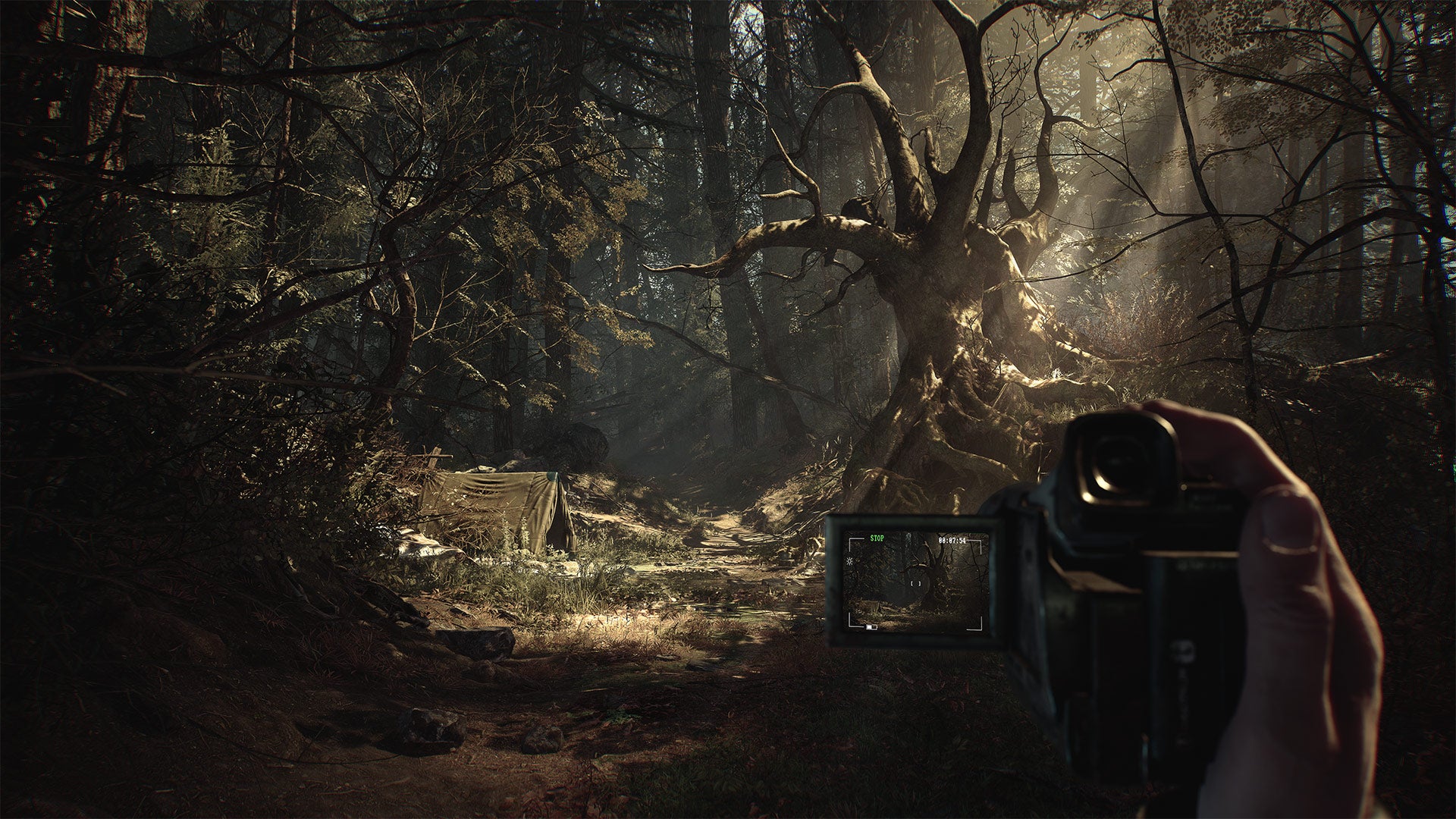 Embarking on your search in Blair Witch will at first feel a lot like light exploration games like Firewatch, with more of a horror kick. You’ll begin finding things: strange totems, twig symbols, abandoned campsites, photographs, videotapes. As you press into the woods, the woods press back: You’ll find yourself inexplicably back in the place you started, or stalked by strange humanoid creatures, or haunted by visions of Ellis’ past.

Narratively, all these disparate things allow you to slowly piece together Ellis’ background and why he felt compelled to join the search—as well as what might be lurking in these woods. It would be gripping throughout, if the gameplay felt as textured as the story.

On a technical level, Blair Witch is a bit of a mess. A handful of times, items that were clearly marked as interactive would just not respond to my inputs as I tried to pick them up. Other times, animations would go awry, as Ellis would speak to a Bullet that had disappeared somehow, or crouch down and behave like he had picked something up even though whatever was supposed to be there had vanished from the screen. One time, the camera went completely haywire, whipping away from the first-person perspective to show a headless Ellis in the middle distance crouching to look at something I had just tried to examine moments ago.

Frustrating as they were, none of these problems truly set me back or cost me much more than the few minutes it took to reload the last save. Sometimes they would even work out in the game’s favour. Blair Witch is meant to be a disorienting experience, the story of a man continually frustrated by his understanding of the world around him. Sometimes a glitch just made me stomp around the woods a bit more, giving me more time to scare myself. (Getting lost is actually pretty hard, since Bullet’s primary function is leading you where you need to go.)

Blair Witch bites off a little more than it can chew for the sake of gameplay variety. While most of the time you aren’t exploring is spent solving simple puzzles where you have to get into locked rooms or find missing pieces of machinery, occasionally you’ll face monsters that will attack you unless you avoid them or ward them off with your torch.

BACK OF THE BOX QUOTE: "Why do we keep letting people go to Maryland?"

LIKED: My dog Bullet, a great original story, and the spectacular and tense finale

DISLIKED: Combat, bugs, not being able to see my dog Bullet

These “combat” scenarios are easily the most frustrating part of the game. Should you fight these monsters, you’ll have to rely on Bullet, who’ll bark in the direction of the monsters that are otherwise too fast for you to see. Bullet never steers you wrong, but despite his fluorescent collar it’s really hard to keep track of which way he’s pointing, so in practice these “fights” just devolve into manic spinning until you accidentally light a monster up.

Making these sequences worse is the fact that they don’t really add anything to the overall experience. They’re more annoying than scary, and also antithetical to what Blair Witch stories derive their most effective horror from: the things you can’t look at.

Not to be an old snob about it, but The Blair Witch Project did a bunch of that opaque nonsense everyone (myself included) loves about Dark Souls, but in movies 20 years ago, and it’s kind of amazing it hasn’t really worked for a major movie again. The 1999 film about university students that went missing in the woods while working on a documentary came with an elaborate backstory that involved a (fake) local legend that accompanied its (very real) setting of Burkittsville, all disseminated by a still-active website designed to suggest that everything in the film actually happened to real people.

The Blair Witch Project was a legendary achievement in what we know today as viral marketing. There’s the ancillary materials that tell you about Elly Kedward, the 16th-century woman accused of being a witch and Rustin Parr, the serial killer who in the 1940s claimed to slaughter children under her influence. Or the movie’s cast of unknown actors using their real names to give credence to their “disappearance.” It was all an expertly-crafted illusion that’s still remarkable to think about today.

Even after the jig was up and everyone knew it was just a movie, The Blair Witch Project lingered thanks to its carefully laid-out lore – which the film only hints at, and contemporary books and “documentaries” expanded on – and its steadfast refusal to provide a definitive answer of why everything went wrong for its protagonists. Were they victims of a supernatural force? Madness? Foul play? All hotly debated theories in the 20 years that followed, since the film itself does not confirm or deny anything other than the slow breakdown of three young people lost in the woods.

Blair Witch tries to keep in that tradition of deliberate opacity, making the smart choice to make its story more about Ellis than any titular Witch that may or may not be real. The result is an arresting story about trauma that manages to be effective despite indulging in tropes like illusory visions and unreliable characters in the service of a twist you’ll almost certainly see coming for miles.

Yet it still works, thanks to a spectacular finale that’s part P.T. and part Outlast, a tense showdown in the house that lurks at the end of every Blair Witch story where you are confronted with a complete picture of the past that haunts Ellis, and asked to decide whether or not you believe in the witch that seems to be tormenting him.

There’s something about the Blair Witch mythos that makes it feel uniquely American among horror franchises. Dig through all that lore, and you’ll find a story about colonial horror, where the Maryland village of Blair – purported to become modern-day Burkittsville – succumbed to mania and drove Elly Kedward out into the woods. This act, the Blair Witch video game (as well as the 2016 sequel of the same name) suggests, irrevocably broke the region, bringing it out of sync with the flow of time around it and making it the kind of place where a serial killer’s house that burned down decades ago can suddenly reappear whole, or a campsite you leave one moment can appear ancient when you find it again hours later. 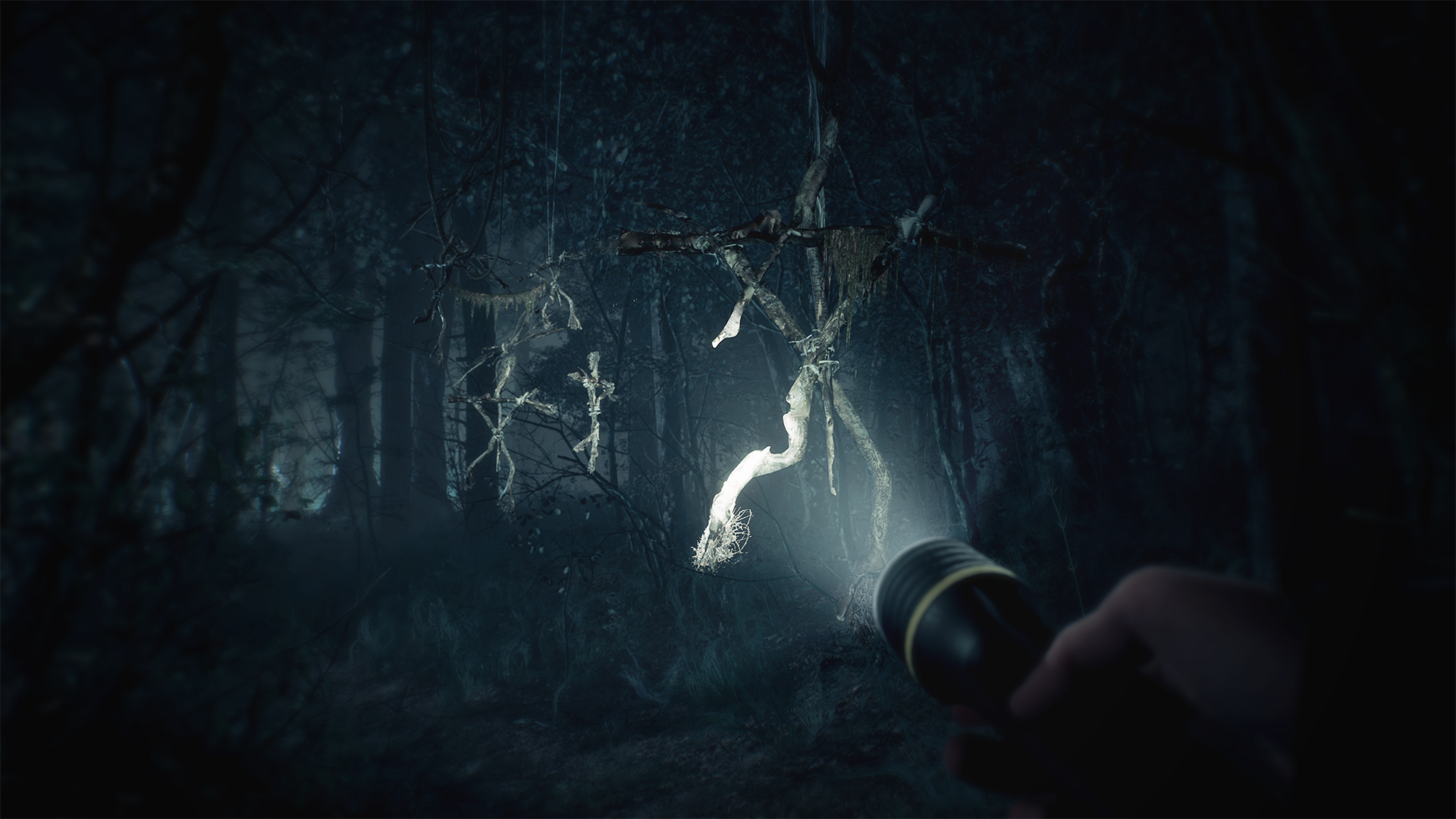 It’s settler horror, built in a way that critiques the very American notions that open forests are there for people to wander through without fear of reprisal, that humans can own every space they occupy, that we deserve to know the answer to every mystery.

In Blair Witch, that kind of thinking only brings Ellis pain, as his search to understand what’s going on in these woods only forces him to confront what’s going on within himself. At the conclusion of the game, you’ll receive an ending based on your actions throughout. While you are told that the game is watching what you do, you’re never told what actions factor into that ending, or what it all might mean. You’ll have questions. You may even be unhappy. In this way, Blair Witch is a perfect homage to its cinematic predecessor, denying the sort of neat resolution the original film also eschewed.

I’m sure you could find an explainer, though.