Steam Libraries Are Getting Long-Awaited Overhaul in September

In the time since Valve first started alluding to (and accidentally leaking mock-ups of) a mysterious Steam library overhaul, eras have ended, empires have risen and fallen, and we’ve all grown weary and hunched. Or at least, it feels that way. Now, the time for change is nearly upon us: Valve will begin rolling out the new and hopefully improved Steam library as a beta on 17 September.

Valve demoed the new library in a behind-closed-doors session in Seattle last week, which Kotaku attended. To begin, Valve designer Alden Kroll showed off a new library home page with Steam-store-like “What’s New,” “Recent Games,” and “Recent Friend Activity” carousels up top. These will be populated based on what developers and friends are up to, rather than a single, universal flow of information from Valve. The focus is on showing what friends are interested in over time, as opposed to just what they’re doing right now a la traditional friends list features. Beneath that is a visual representation of all your games, which you can sort as you please. This includes the option to drag and drop games into “collections,” which are replacing Steam’s current category functionality and function dynamically. This means that if you create a collection based on tags – say, “RPG” and “controller support” – any new game you buy will automatically be added to that collection. 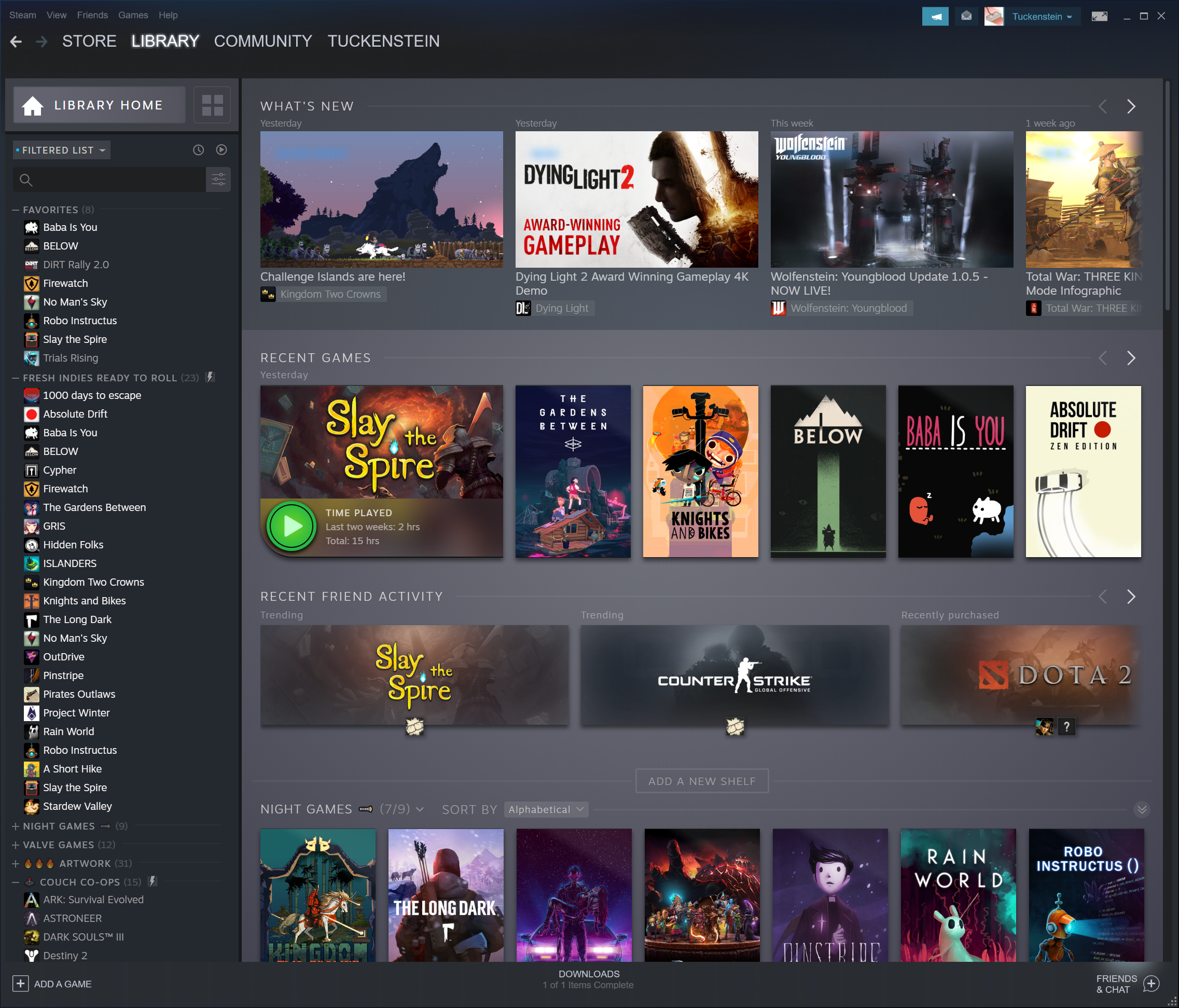 Individual games’ library pages are also receiving an overhaul. They look much sleeker now, with art that developers can rotate up top and an activity feed showing what friends have been up to in that game below. There’s also a panel on the right populated by your achievements and screenshots. As you scroll down this page, these sections give way to content from the community at large – guides, videos, screenshots, and the like. When you exit games, you’ll also get a summary showing things like achievements and trading cards you earned in your play session, as well as screenshots you’ve taken. Lastly, developers will be able to add event banners to games’ library pages as well. Valve demonstrated this with a Dota 2 mock-up featuring a splashy banner announcing the 2019 International tournament’s battle pass.

This new event system, Kroll said, will soon be central to Steam. When a developer hosts an event, it won’t just get prominent placement on a game’s library page; it’ll also appear on the community hub, the library landing page, the store, emails players can opt into receiving, and other sections. Valve anticipates that developers will use it to announce everything from updates to in-game challenges and believes the system is necessary in an era increasingly focused on constantly updating “service” games. 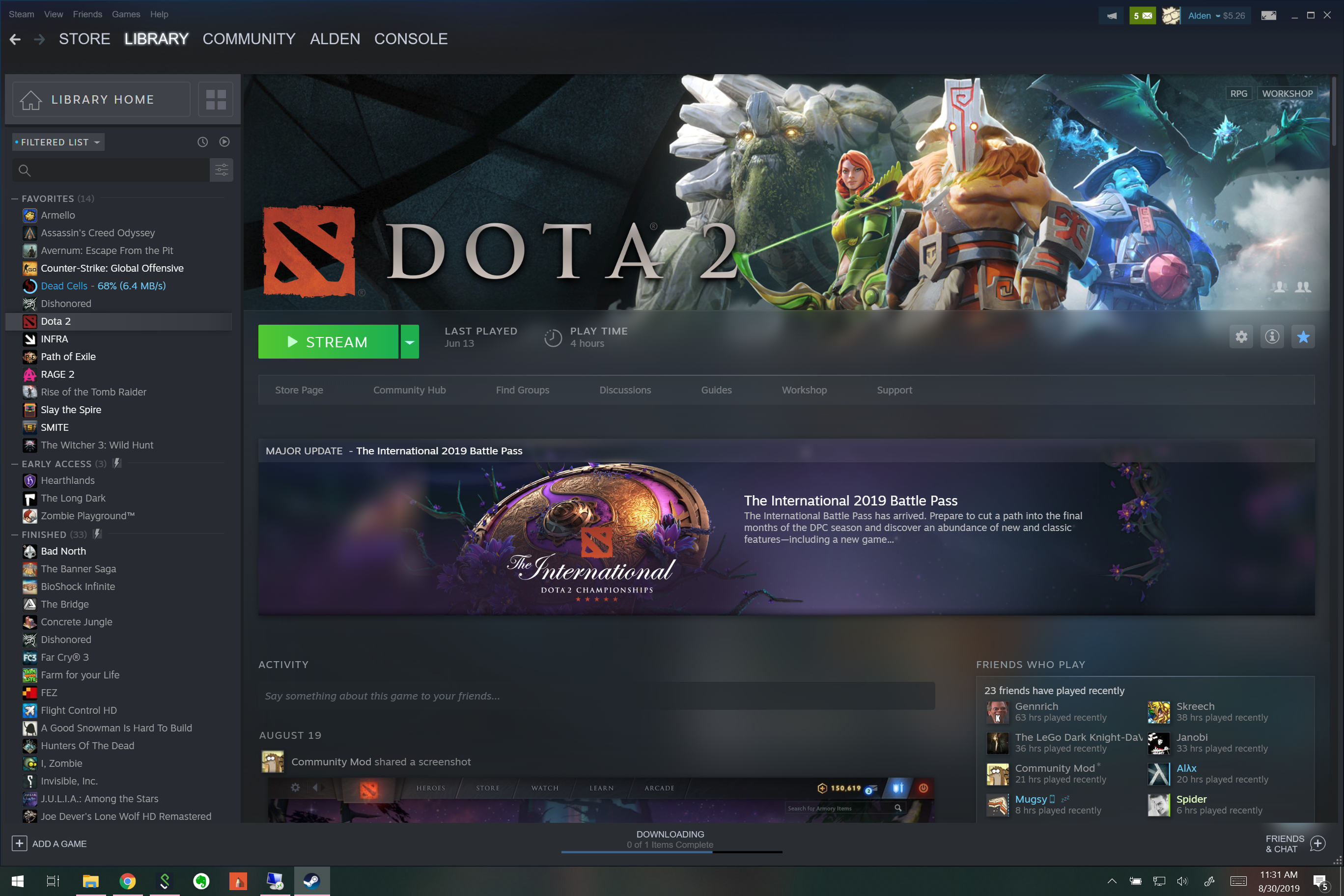 As for what Valve is doing to keep developers from gaming these systems like some recently did with the Steam store’s “popular upcoming releases” section, the company has a handful of solutions.

“For each player, it’ll be personalised based on what they’ve played a lot, what they’ve played recently, and what they’ve played a lot in the past,” said Kroll of the “What’s New” section at the top of the Steam library. “There’ll also be some rate limiting to make sure we’re not showing six updates from the same game at the same time. There’s definitely going to be a bunch of those things in there. We also want to hear feedback from players during the beta so we can fine tune that.” To close out the session, Kroll spent a few minutes reflecting on the launch of Steam’s new experimental “Steam Labs” section and the future of the store. New experiments, he said, are on the way, including six-second “microtrailers” for all games, new search page options that allow users to narrow results by discounts and tags, and a “deep dive” feature that will be detailed in the future. In the long run, Valve hopes to make the process of discovering games on Steam more entertaining.

“That’s sort of a theme across Steam Labs in general,” said Kroll. “We’re thinking about ‘How do we make the process of game discovery and game exploration more entertaining?’ Games are obviously entertainment, and watching trailers is fun, looking at screenshots, reading descriptions – there’s a lot of entertainment value in that process too. We think probably the next version of the store shouldn’t just be rows of game branding images. It should be something more that’s more interesting and entertaining.”