I Can't Convince My Friends That Overcooked 2 Is Fun, Not Stressful

No game is more controversial among my friends than Overcooked 2, a relatively innocuous game about cooking, plating and serving food. Overcooked 2’s saccharine art style and upbeat ukulele soundtrack are a thin cover for deeply stressful gameplay. For me, this is a draw; for everyone else who comes to my flat, Overcooked 2 is a blight upon their weekend.

Despite its “Very Positive” rating on Steam, Overcooked 2 is not a game I can convince my friends to play with any regularity. It’s too stressful, they whine. It’s the weekend—I don’t want to play a game that makes me anxious. More often, I’ll just get a No, no, no, no as someone navigates the Switch menu and selects Super Smash Bros. The reason is that despite its cartoony appearance, Overcooked 2 simulates food service, and food service is no joke. Screaming instructions at colleagues from over bubbling pans of oil and passing raw ingredients across rooms littered with obstacles is absolutely not a job most people could handle. Overcooked 2 does an exquisite job mimicking and exaggerating these conditions, making collaboration and communication more integral to gameplay than reflexes alone.

That said, the word “cooperative” in Overcooked 2’s product copy is more of an aspiration than a gameplay description. Let’s say we’re making sushi. Shanon reads the orders out loud and chops fish. Tim is on rice duty. Marcus wraps nori around the rice and fish and serves the orders. I clean the plates and bring them to Marcus. This is an ideal and fictional Overcooked 2 situation, wherein all names have been fabricated because the only friends who play Overcooked 2 with me are fictional. Before Overcooked 2 became a bugbear among my friends, a game might go like this:

Marcus: What the hell, the kitchen is split between three hot air balloons?

Marcus: No, what? Forty?

Shanon: Just get it to me now. Also, send meat.

Me: OK, I’m putting the pasta in the pots. Wait, shit, can someone chop this meat?

Me: Thanks, but the orders didn’t ask for beef? We just needed fish.

Shanon: Guys, it’s been three minutes and we haven’t even served one order.

Marcus: That’s because you’re a shitty communicator, Shanon! Just tell me exactly what you want!

Shanon: The orders are right there on top of the screen.

Me: All we have are four plates of undressed pasta, three kitchen fires and a line cook who is continually throwing themselves into the abyss below.

People have different ideas of what constitutes a stressful situation. For me, it is overwhelmingly stressful to be dropped into a huge open world game with 20 quest prompts marked on my mini-map. For others, even playing video games with another human at all is stressful; they’re going to be doing things you can’t control, and if you don’t accomplish the group gameplay goal, it might be their fault.

One of my two friends who will play Overcooked 2 is a touring musician, used to aligning himself with others’ tunes and gracefully giving and taking orders. He loves this game and treats its “stressful” cooperative mechanics as its own separate strategy game. “Failure is distributed among a bunch of different people,” he said. “It’s never really that bad to lose because there are a bunch of people to take the fall with you.” The other friend works in food service as a line cook and a server and describes the game as “soothing and meditative.” Reading out orders, assigning tasks, and keeping everyone on track comes naturally to her, as does impulsively volunteering to take on any unmanned tasks that need doing.

It can be nice to simulate real-life thinking patterns from your job or hobby without fearing any material repercussions you might suffer after messing up. It’s unusual for us to have concrete goals, like achieving 600 points, or receive concrete feedback, like a sad buzzing sound of failure. Friends used to working solo might not even notice how little they’re flexing their cooperation muscles in their day-to-day, and it’s only when they play Overcooked 2 that they realise it. 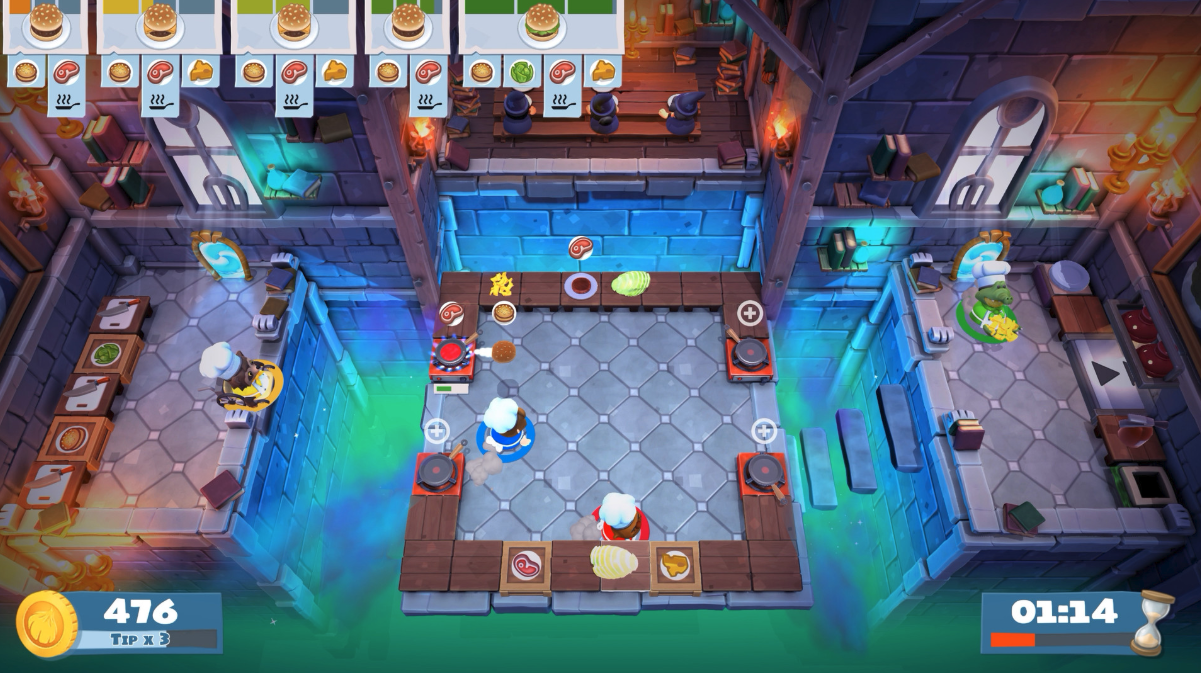 I generally don’t find Overcooked 2’s cooperative mechanics stressful. (Hell, a lot of my work is looking at a bleeding, red article draft and humbly accepting edits from people smarter than me until we collaboratively decide something is worth publishing.) What I do find stressful are its increasingly treacherous kitchen designs. I can bargain with teammates to accommodate my gameplay goals; I can’t bargain with the game. Sometimes, I fall off a level carrying ground beef if my controller drifts even the slightest amount. Other times, I need to wait for passing cars to clear before I dash across the street with some cooked rice. As players advance through the game, its levels become increasingly chaotic, or, as I might say while throwing my controller, unfair.

In an interview with Wired, Overcooked 2 lead designer Gavin Hood described this type of stress as intentional: “A lot of the time, the things that made players laugh and cry wasn’t having difficult-to-understand and prepare recipes...It was those moments in stages where everything changes; that point at which the kitchen you’re cooking in starts to work against you.”

In games, there are stressors you can control and stressors you can’t. For some of my friends, cooperative mechanics are not controllable stressors. They don’t have the impulse to yell out to a buddy and tell them they’re messing up the pasta. I can control that, or at least fathom doing so without my heart rate skyrocketing. We all have very different thresholds for stress.

Admittedly, I suck at dealing with Overcooked’s level design. But I can calculate that it’s more fun for me to keep playing and getting better. That’s why I enjoy mastering Overcooked 2’s specific brand of chaos. When other friends see that chaos, they think to themselves, No, this chaos isn’t for me, and instead choose to untangle another one better suited to their thought patterns. I can’t say I don’t get it, but who else is going to deliver this raw meat across two rafts drifting down a river?