Control, the latest game from Remedy Entertainment, has completely taken over my brain. In it, you play as Jesse Faden as she explores the Federal Bureau of Control, a federal agency that studies and contains supernatural objects. Playing a game about secrets and conspiracies will start making you believe in secrets and conspiracies, it turns out. While I love to rehash the Steev Mike theory as much as the next girl, a few Control-related theories about the game’s world have caught my eye. In particular, fans are theorising that Control takes place in the same universe as Remedy Entertainment’s previous game, Alan Wake. They’ve got me convinced.

Remedy’s Control takes place in New York, far from Alan Wake’s setting of Bright Falls, Washington. The bureaucratic nightmare of The Oldest House, the brutalist building that houses the Federal Bureau of Control, could not feel further from the spooky small-town vibe of Alan Wake’s Washington. But there are connections, and some of them are quite obvious. While I was playing last night, a character told Jesse Faden that they’d dreamed of multiple universes. “In one world, there’s a writer who wrote a story about a cop,” this character said. “In another world, the cop was real.” This seemed like a reference to both Alan Wake and Max Payne. In Alan Wake, the titular character wrote a series of noir novels about a cop. Max Payne is a noir video game about a cop.

Some of the references are harder to find but appear to place the events of Alan Wake more concretely in the world of Control. Throughout Control, you can find documents about Altered World Events, which are events where supernatural objects wreak havoc on normal people. One such document is about Bright Falls and the havoc that Alan Wake wreaked there. 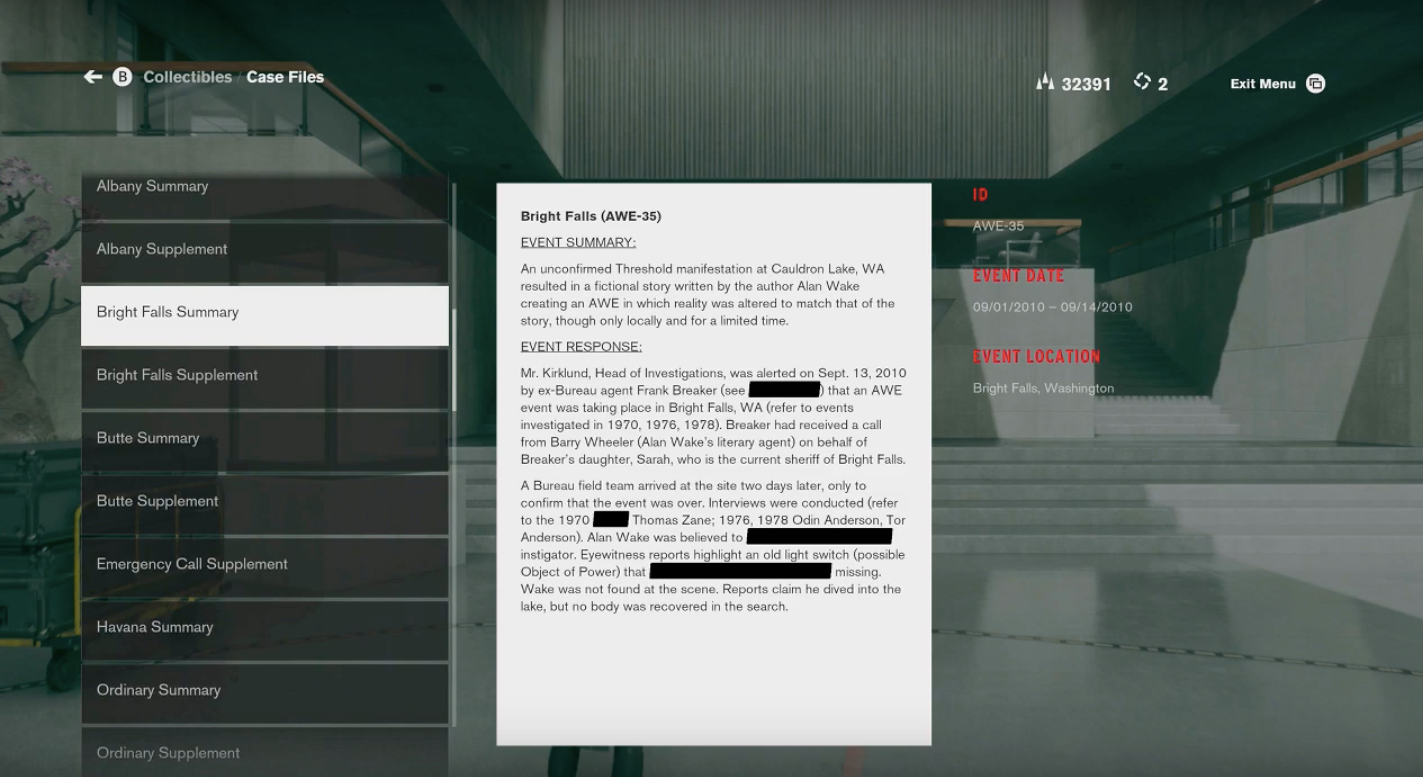 According to the in-game document, the Federal Bureau of Control went to Bright Falls two days after the events of Alan Wake to investigate but didn’t find much. They also never recovered Wake’s body. Another document catalogues the thermos collectible, an item from Alan Wake that players collect for an achievement, as an Altered Item that’s being studied by the Federal Bureau of Control.

If you’re still not convinced, maybe this will help: Alan Wake himself also shows up in Control. If you go exploring on the fifth floor of the Panopticon in the Containment sector after you’ve gotten the levitation ability, you’ll find a hidden area with both Wake and the thermos. This video shows you how to find both things:

While I can’t say for sure that these references are an indication of a larger shared universe or just something fun for fans to find, I like the idea of Alan Wake and Control taking place in the same world. At the very least, I like the idea that there’s an organisation making an effort to get Wake back to our dimension. He deserves a win. The reason I’m personally inclined to believe this theory, though, has to do with a band that features in both Control and Alan Wake.

In the Research sector of Control, you can find a listening room that plays a song by the band Old Guards of Asgard. The Old Guards of Asgard are also in Alan Wake and its follow up, Alan Wake’s American Nightmare. If you listen to the song that plays over the credits of American Nightmare and play it backwards, you can hear someone say, “It will happen again, in another town. A town called Ordinary.” Where is Jesse Faden from? A town called Ordinary. Checkmate, motherfuckers.