In the vast video game version of Washington, DC in Ubisoft’s The Division 2, there is a single police car that reads “POLCE.” The misspelling has been in the game for months, but only on Wednesday, after a prompt from the game’s creative director, did people finally start reporting its discovery.

A Berlin-based gamer named Patrik (SteelRampage77) was the first of over a dozen people to tweet images of the car later on Wednesday. He seems to have gotten to it first.

“It took me about two hours, 10 minutes,” he told Kotaku over a Discord call. “It was fun. My eyes were hurting a little but I must admit I’m not the youngest anymore.”

In order to find the car with the misspelling, Patrik said he walked up and down the game’s city streets, explaining that his work as a security guard motivates him to approach problems strategically. He said he started in the upper right corner of the map. “I was in the middle of the street looking left, looking right, as far as I can look,” he said. Then he’d shift a block and do the next street. Unfortunately for him, the car was in the lower left part of the map.

The Division games are set in a post-disaster version of the United States, with the first game set in New York City, the newer one in Washington, DC. The reason the sequel contains a car with “POLCE” on it goes back to a meme that started in August of 2018. A pre-release trailer for the game released that month showed a police car that appeared to have the word “POLCE” written on its side. It appeared to be an optical illusion caused by the camera angle and the car’s rear door being ajar. Nevertheless, a meme was born.

The origin of the meme: a car from The Division 2's Gamescom 2018 trailer

In February, the game’s creative director, Julian Gerighty, responded to a fan joking on Twitter about the meme by saying that a “POLCE” car would be added to the game in a future update. And in a 13 March livestream, just after the game’s launch, he vowed to get it added in there and to make it a hunt for players. “That would be fantastic,” he said.

At some point in the following weeks, the POLCE car was added into the game, but it took a reminder from Gerighty on 21 August to get people hunting. “Just a reminder that there is a Polce car in D.C.,” he tweeted at 12:07 pm British time. “A single car with Polce written on the side and not Police. First person to find it, tag @TheDivisionGame and me and we’ll get you swag.”

At 2:27 am the next day, Patrik tweeted a picture of the car. Others soon followed. Patrik told Kotaku that he’d seen the car before during his some 940 hours of the game. He’d found the car and had noticed that there was a smiley face in the “O.” At the time, he hadn’t realised there was a prize attached to its discovery so he didn’t memorise its location. “I thought, okay, it’s funny, it’s just like the ducks,” he said, referring to the hidden rubber ducks that are posed in funny ways throughout the game. When he saw Gerighty’s challenge, he was motivated to find that car again.

Patrik’s discovery has been bittersweet. He says that when he was searching for the car he was part of a tree-player squad, each of them spread across the map, and he complained to Kotaku that one of those other players reacted to Patrik’s discovery by going to the same spot, taking a photo and tweeting it out, as if they’d been the person to find it. “I was kind of pissed off because someone from your own community tries their own cheap thing,” he said. That other player did not reply to a request for comment about how they came upon the car.

Regardless, Patrik’s Tweeted images of the POLCE car are the first on the platform. He does appear to be the one who first discovered it and will presumably get that recognition—and some swag—from Ubisoft. 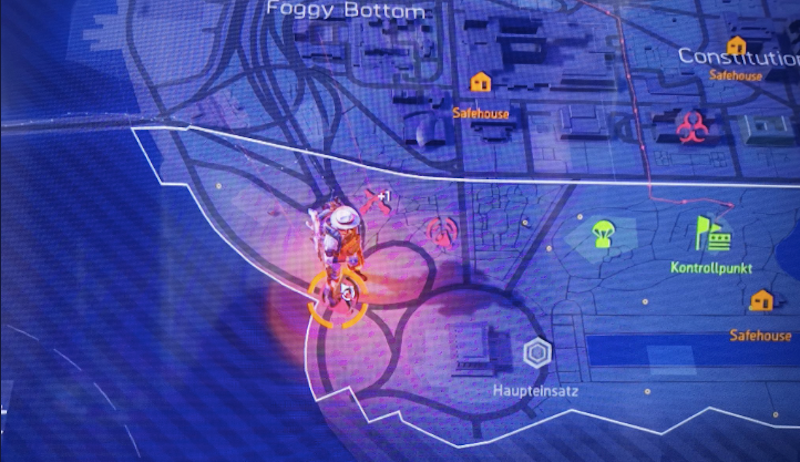 The location of the car, as photographed by Patrik “SteelyRampage” (Photo: SteelyRampage)

For anyone else who wants to find the car, head to the western side of the game’s Lincoln Memorial and look for a highway underpass. There, you’ll find one car that looks just a little different from the hundreds of other police cars throughout the game.