The game we’re playing is called Ancestors: The Humankind Odyssey. It’s the brainchild of Patrice Désilets (Assassin’s Creed, Prince of Persia: Sands of Time) and his team of a few dozen developers at Panache Digital.

Ancestors is a third person survival game designed to be played with a controller. It starts you off in control of a baby primate in an African jungle some 10 million years ago. You soon control any member of a small clan. The game then challenges you to survive, procreate and evolve across generations and, eventually, millions of years.

You spend a lot of time running around in the jungle, using buttons to emulate processes like seeing, thinking, hearing and smelling. Press a button to scan the environment. Focus on an icon near the top of the tree and hold the button. Now you’re thinking about it. Climb up that tree and grab an object. Hold another button to peer at it and then, in a flash, your character recognises it to be a special fruit that can keep its belly full as the in-game day progresses. Repeat this process and you discover all kinds of plants and rocks and other things that just might have a use, if you can figure out what it is. All the while, your sleep, thirst and hunger must be tended to.

Ancestors is tough but fascinating, and I wasn’t sure I was going to like it at first. I still can’t tell if I’ll feel as positive about it once I’m done, or if I’m going to be worn down by the game’s opacity. Currently, I can’t stop thinking about it. I’ve been eager to return to it nightly to sort out its secrets.

At the start of the game, the developers promise to not hold your hand, and they certainly keep their word. 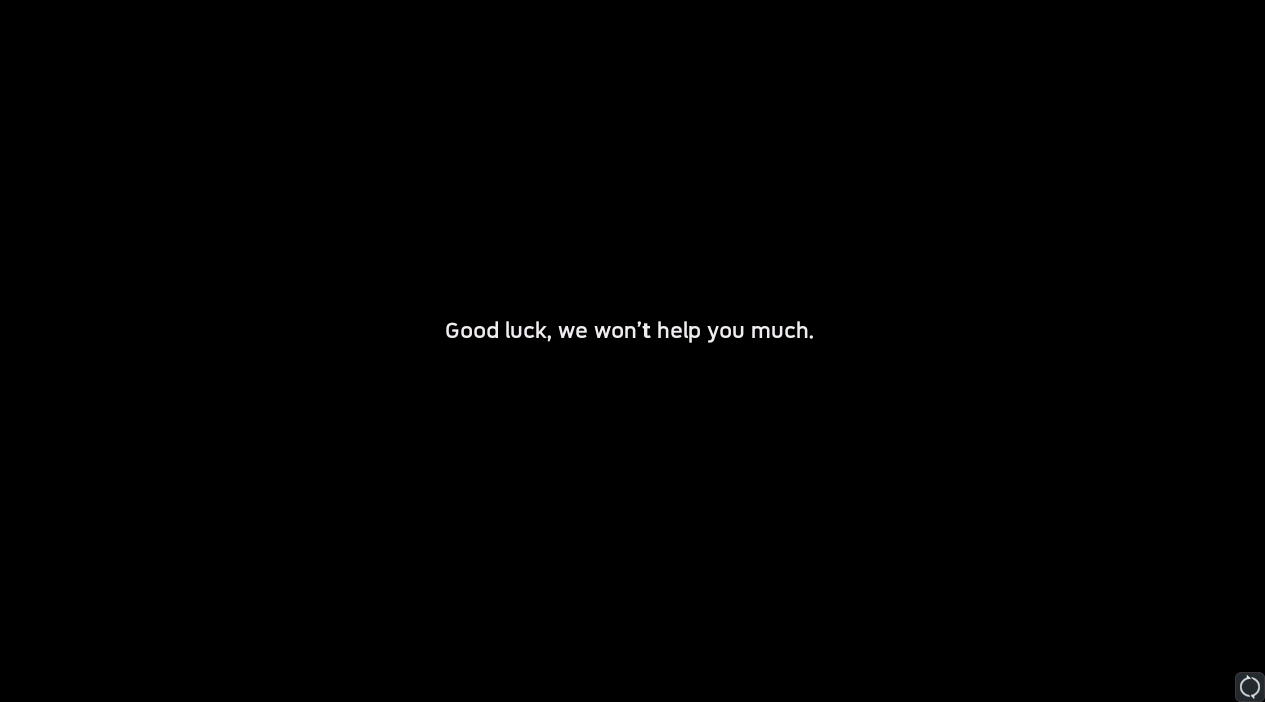 Ancestors is hard to get into, which I suspect will be off-putting to some players and thematically perfect to others. After all, what Désilets and team are trying to portray, best I can tell, is human evolution as a murky climb from bewildered ape to smart homo sapiens. We are confused, barely grasping our tools, barely comprehending our surroundings, struggling to communicate, but slowly we improve.

We are not entirely helpless at the dawn of humanity. We’re swinging from trees from the get-go (expect no less given the games on Désilets’ CV):

But mostly you are overwhelmed and attempting to evolve from incapable to capable. The distinct nature of this game emerges in moments when you make a discovery by, say, breaking off a branch and realising it is a stick and that said stick could be used as a tool. This discovery is presented in a brief animation as you hold the stick and finish pressing a button to inspect it. Ah ha! It’s a stick, your character realises. Now to use it, but for what? The game won’t say, but if you’ve paid attention to your surroundings you might have some ideas.

As I’ve played, I’ve had a checklist of confusions waiting to be clarified: How can I lift the heavy rocks I find in the jungle? How do I stop bleeding after a boar charges me or a panther claws at me? And, really, how do I mate?

As I’ve played further, I’ve gradually stumbled across the answers. I’m lifting those rocks now, I’ve found the plant that can stop my bleeding and mating is indeed something that can happen after a few proper backrubs. 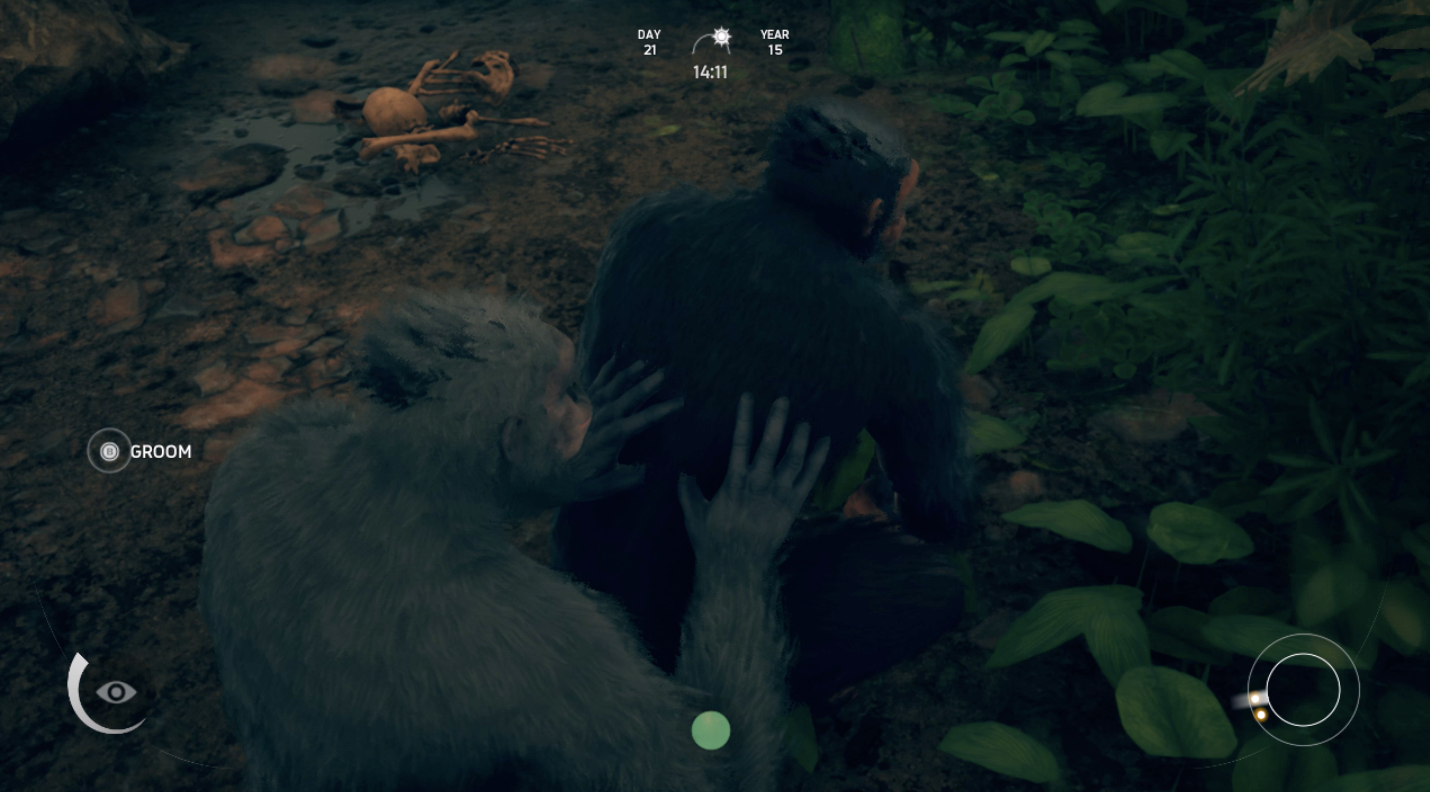 When I interviewed Désilets about Ancestors at E3 in June, he was loath to explain any of its gameplay to me. I’d taken that for a developer’s standard stinginess with discussing features, let alone spoilers. Since playing the game, though, I’ve come around to his thinking: the eurekas in this game are wonderful to discover on one’s own.

That said, this is a game of false starts. I had to restart the game four times before I got into a successful playing groove, each time more frustrated about having to play its intro again. In my first three attempts, the hostility of the game’s world and the vagueness of its systems (and, okay, some of my own carelessness) repeatedly wiped out most of my prehistoric clan. By the fourth try, I’d not just learned how to stop bleeding after an animal attack but how better to use hearing and smell to detect predators from afar. I’d also learned that the game doesn’t really dead end if all the adults in your clan are killed, which is what I thought it had been hinting at. Instead, if you’ve got babies left, you can find other grown primates in the wild to help form a new clan.

I’ve learned, as I’ve played, what this game’s evolutionary rhythm is intended to be. It rewards playing one generation of a clan only long enough to advance to the next, rather than exploring endlessly without moving time forward. Each clan can have babies, adults and elders, each with distinct characteristics for their age class. Most crucial are the babies. Playing as an adult and exploring, eating or just about anything else while carrying babies accrues the player experience points that can be spent to upgrade a neurological network of abilities for your species. The upgrades are refreshingly primitive. I was delighted, for example, to attain the ability to use two hands, rather than one, when manipulating items.That allowed me to trim tiny branches off of a bigger one to make a better stick. While you can keep exploring and upgrading, the moment you choose to advance a generation, you risk losing a lot of that progress. You can only retain as many advancements as their babies in your clan. So, the idea is to procreate enough to have a bunch of babies, explore enough to have a similar number of advancements, then advance a generation. Do all of that enough and you can evolve. Bit by bit, the primates I’m controlling are walking more upright. 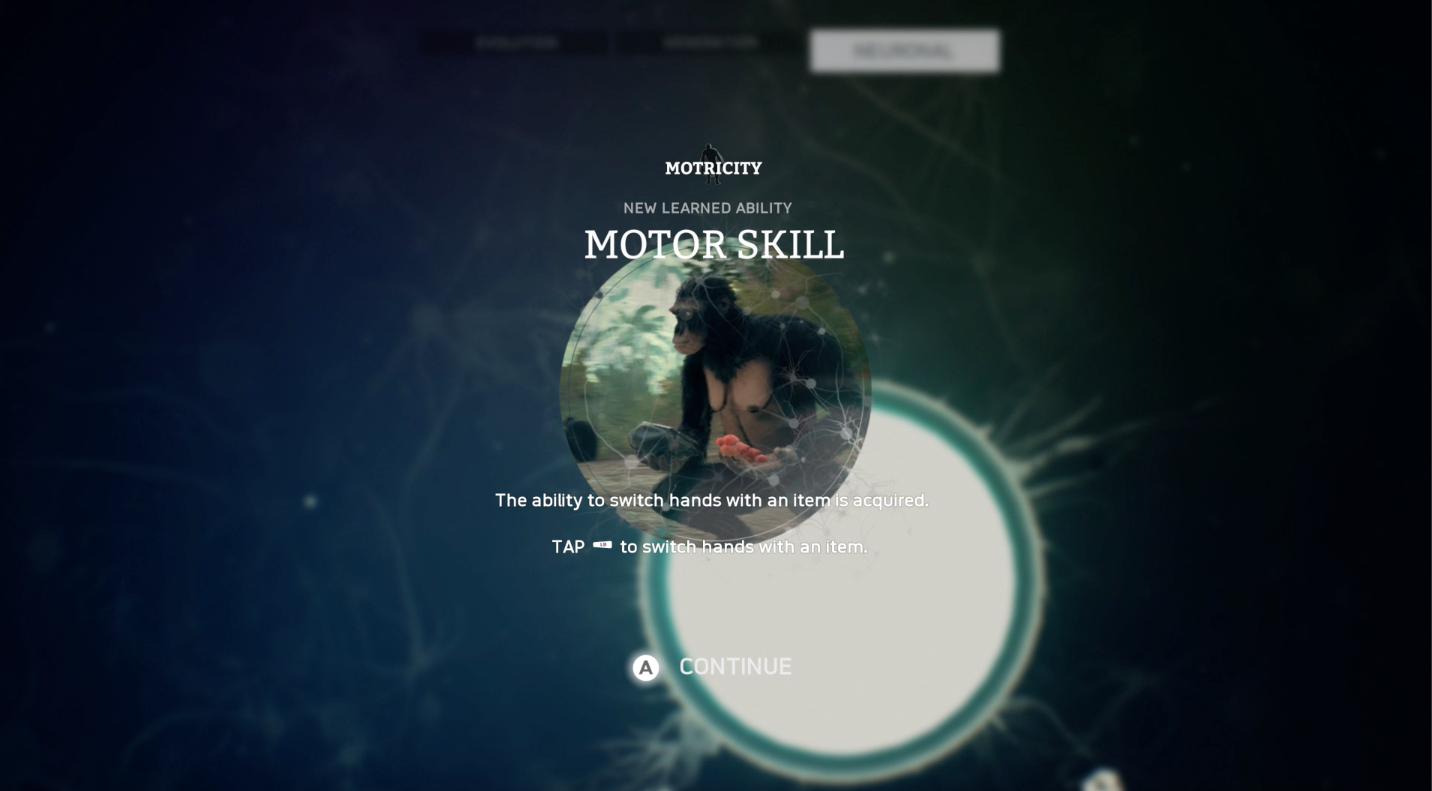 I think I’m pretty early on in the game. I’ve only evolved twice and am still some nine million years in the past (The game goes to two million years ago). I’ve made enough progress to evolve twice, and just last night I figured out how to kill a boar and a tiger. My clan, however, is down to just two adults. No babies. No elders. Not enough of a population to survive. So next time I play I will head back out to the jungle, hope the game doesn’t make rebuilding my clan too bad a slog, scratch my head about how to start eating the meat of animals I’ve killed, and get a few more upright steps closer to the rise of humankind.

The game has a pretty staggered release. It’ll be out on PC on the Epic Games Store next week, then on PS4 and Xbox One in December, by which time there’s no doubt it’ll be patched and iterated upon. It’s listed for a Steam release in 2020.