Nintendo Is Cracking Down on Popular YouTube Music Channels

A popular YouTube channel dedicated to sharing video game music was recently hit with over a hundred copyright claims, the latest to fall under intense scrutiny as Nintendo appears to be ramping up efforts to prevent the illicit distribution of its music.

“Game over,” the YouTube channel GilvaSunner, which has over 300,000 subscribers, wrote on Twitter yesterday. They also shared a screenshot of an email inbox displaying dozens of copyright claims against videos of music ranging from The Legend of Zelda: Ocarina of Time’s “Hyrule Field” to “Mega Man 2 Medley” from Super Smash Bros. 3DS.

This morning, GilvaSunner shared another bevy of copyright claims, this time against videos featuring music from Fire Emblem: Awakening. “115 videos in total blocked so far,” GilvaSunner wrote. “They started manually with the most viewed content on the channel, and are now going through the playlists one by one I guess.”

Nintendo did not respond to a request for comment by the time of publishing.

This isn’t the first time Nintendo has gone after a major YouTube channel for hosting its games’ music. In May, the company went after the channel BrawlBRSTMs3, which included soundtracks from throughout the Super Smash Bros. series, hitting the most popular videos with copyright claims. 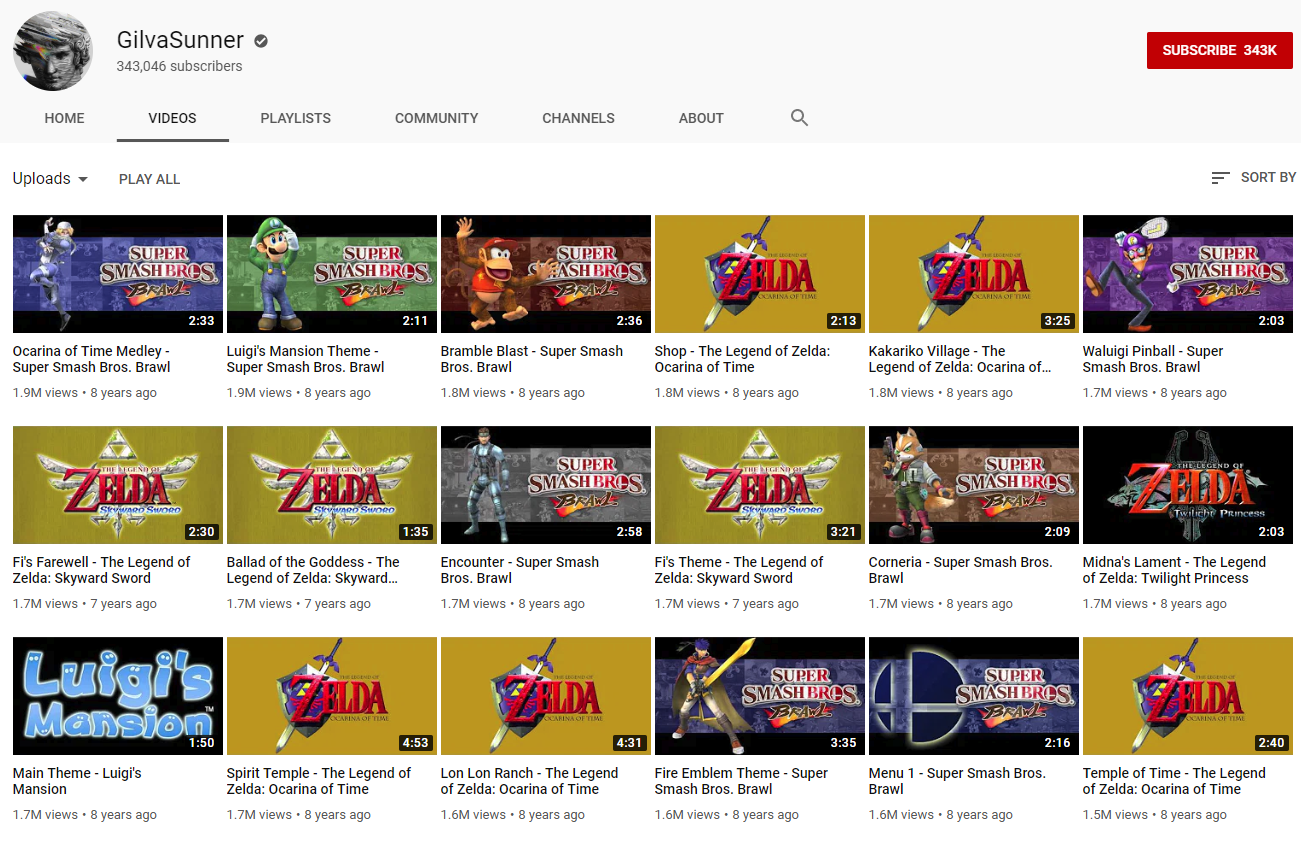 GilvaSunner is one of the biggest YouTube channels for extended Nintendo music tracks. (Screenshot: Kotaku/YouTube)

“We are removing all videos containing music owned by Nintendo, since they have finally begun to block their content on our channel,” the channel said at the time. “This is a fair warning, so we are acting accordingly to avoid copyright strikes. We don’t want another situation like when Smash Ultimate was leaked 2 weeks early. We will no longer upload Nintendo content.”

Last night, BrawlBRSTMs3 announced that it was voluntarily terminating the channel completely due to subsequent copyright strikes against it. “Part of the reason for our voluntary shutdown is out of respect for the copyright owners of all music we’ve shared,” the YouTuber said. “Thank you all for your contributions and support over the past 9 years. You’ve all made it very fun, and I hope you’ve enjoyed our favourite uploads.”

For years, YouTube has served as a bastion for fans to share and listen to their favourite video game music without having to actually boot up the games themselves. It’s been especially effective for preserving music to older classics like Ocarina of Time or Super Mario 64. While many companies have migrated their music back catalogues to places like Spotify—Square Enix recently made every Final Fantasy soundtrack available to stream—not all of them have. The most notable absence is, of course, Nintendo, which makes the ongoing disappearance of its music all the more discouraging for some.

“Who can remember long nights at the library studying to Nintendo music? For me, it was most typically ‘Where the Ancestors Sleep,’ ‘Fort Galahad,’ ‘Mechonis Field,’ and ‘Central Factory’ from Xenoblade Chronicles,” wrote one user on Reddit last May when BrawlBRSTMs3’s channel was first targeted. “Since the early 2010's (if not earlier), BrawlBRSTMs3 has been the go-to YouTube channel for extended versions. Many of us know the name by heart, even if we can’t spell it.”