In Photos: 2,000 Dancing Pikachus (And Their Fans) Take Over Yokohama, Japan

By Amanda Silberling on at

The sixth annual Pikachu Outbreak is taking place this week in Yokohama, Japan, and 2,000 dancing Pikachus have taken over the city. I spent a night surrounded by giant electric mice, and those who love him.

I’m not exaggerating when I say that Yokohama, a city about an hour outside of Tokyo, has been well and truly taken over by Pikachus this week. The subway turnstiles say “pika pika” when you pay your fare; hundred-foot inflatable Pikachus stand tall in public parks; children and adults alike sport their best Pikachu gear, swarming the city in a sea of bright yellow.

It’s something so outlandish and fantastical that I can’t help but marvel at the sheer incredulity of it all. I long to have been a fly on the wall in the meeting wherein someone pitched, “Hey, what if we release a fleet of dancing Pikachu into the streets of Yokohama?” As a jaded American travelling through Japan for the first time, I’m conditioned to search for ulterior motives. The entire festival is free, so it isn’t about money, at least overtly––there’s some merch on sale, but only in small, scattered kiosks. It might be for brand exposure, but let’s be honest––is there anyone in Japan who doesn’t know what a Pikachu is? Someone at the Pokémon Company tells me that they don’t care how many people attend the event, and that they don’t have any target audience numbers. They just want to spread joy, and to my surprise, I believe them. How can you resist smiling when you encounter dozens of giant Pikachu dancing across town?

The Pikachu Outbreak festival, which runs every night this week through 12 August, is a feat of chaotic good. It’s like the Tokyo transit system—an overwhelming influx of stimuli, yet your train and/or Pikachu performance will always arrive like clockwork. There are so many events across town over a three-hour span that, unless if you possess the agility of the electric mouse Pokémon itself, it will be impossible to attend every performance.

Trust me (and my iPhone’s step counter)—I tried. After spending the day at Pokémon Go Fest in nearby Rinko Park, I hung around to watch the first performance of Pikachu Outbreak, which is called “The Forests,” after the clusters of trees surrounding the park. Two of the other events, “The Seas” and “The Streets,” follow the same trend, using the natural terrain of downtown Yokohama to provide a backdrop and a theme for each performance.

Before the event, I plotted out a painstakingly detailed route that will allow me to see every performance. In addition to “The Forests,” “The Seas,” and “The Streets,” there is a Pikachu Parade and an Eevee Parade. It’s about a 20-minute walk between each of the three public parks where the action happens, and the parades lie somewhere in the middle. 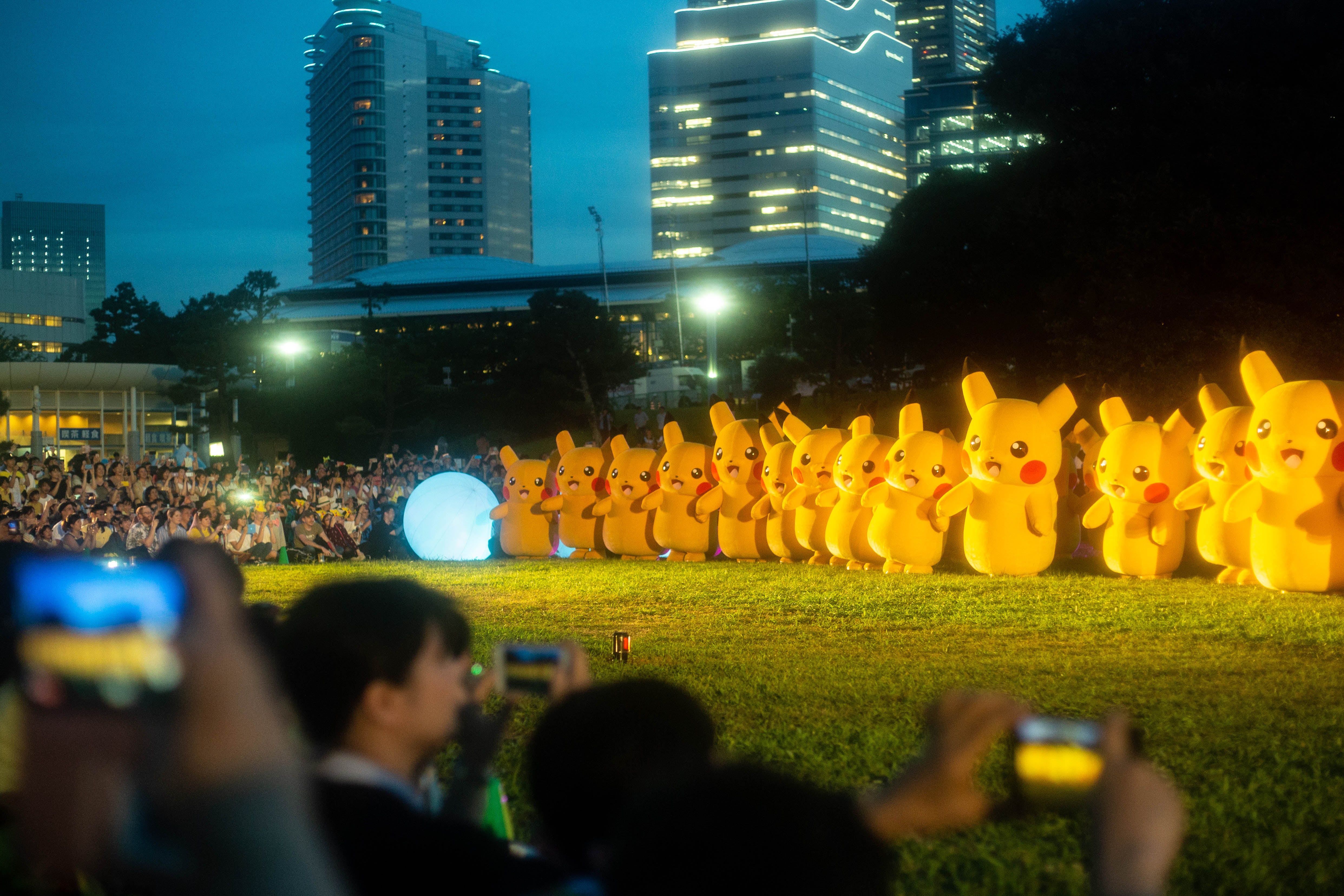 The event is a fever dream made material. I spent my night running through Yokohama, trying to see as many Pikachu as I could. I wanted to see every last bit of every performance, but I only managed to hit three and a half out of five. To be honest, given the hectic nature of Pikachu Outbreak, I consider this a success.

I catch my first glimpse of the larger-than-life Pikachu as they emerge from behind the trees at “The Forests.” They walk towards the crowd, so synchronised in their movements that I wonder if they’re robots. “I didn’t expect them to be so cute,” says Linnea Bergman, a Swedish exchange student in Japan. 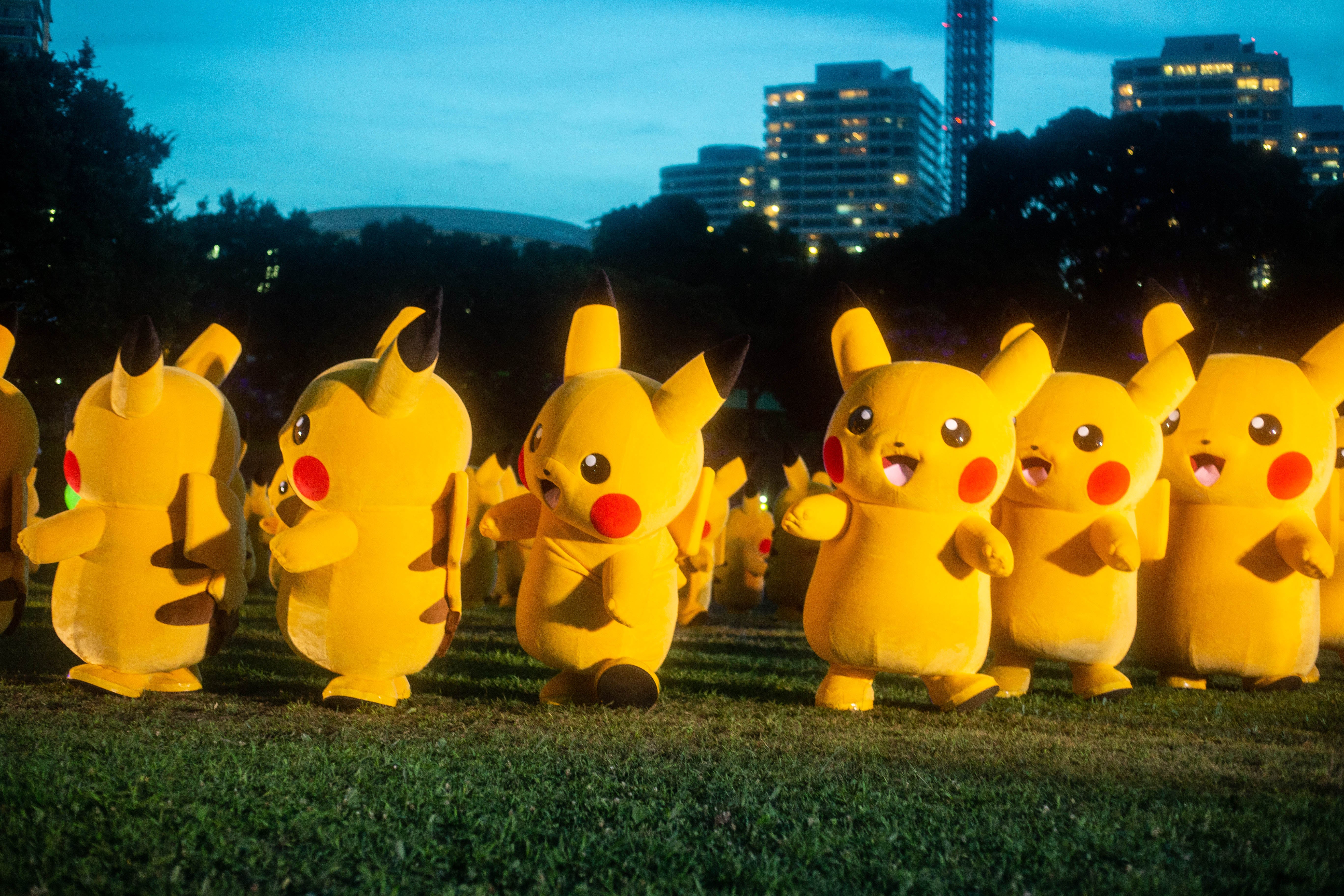 The first performance ends at 7:05, the sun setting as the Pikachus dance. Their red cheeks glow like they’re about to emit thundershocks.

The first showing of “The Streets” starts at 7:10, and the crowd disperses every which way, rather than making a Beedrill-line for the Yokohama Museum of Art. I end up missing the next event and head down to the waterfront to catch “The Seas,” only to make it just minutes before the performance. 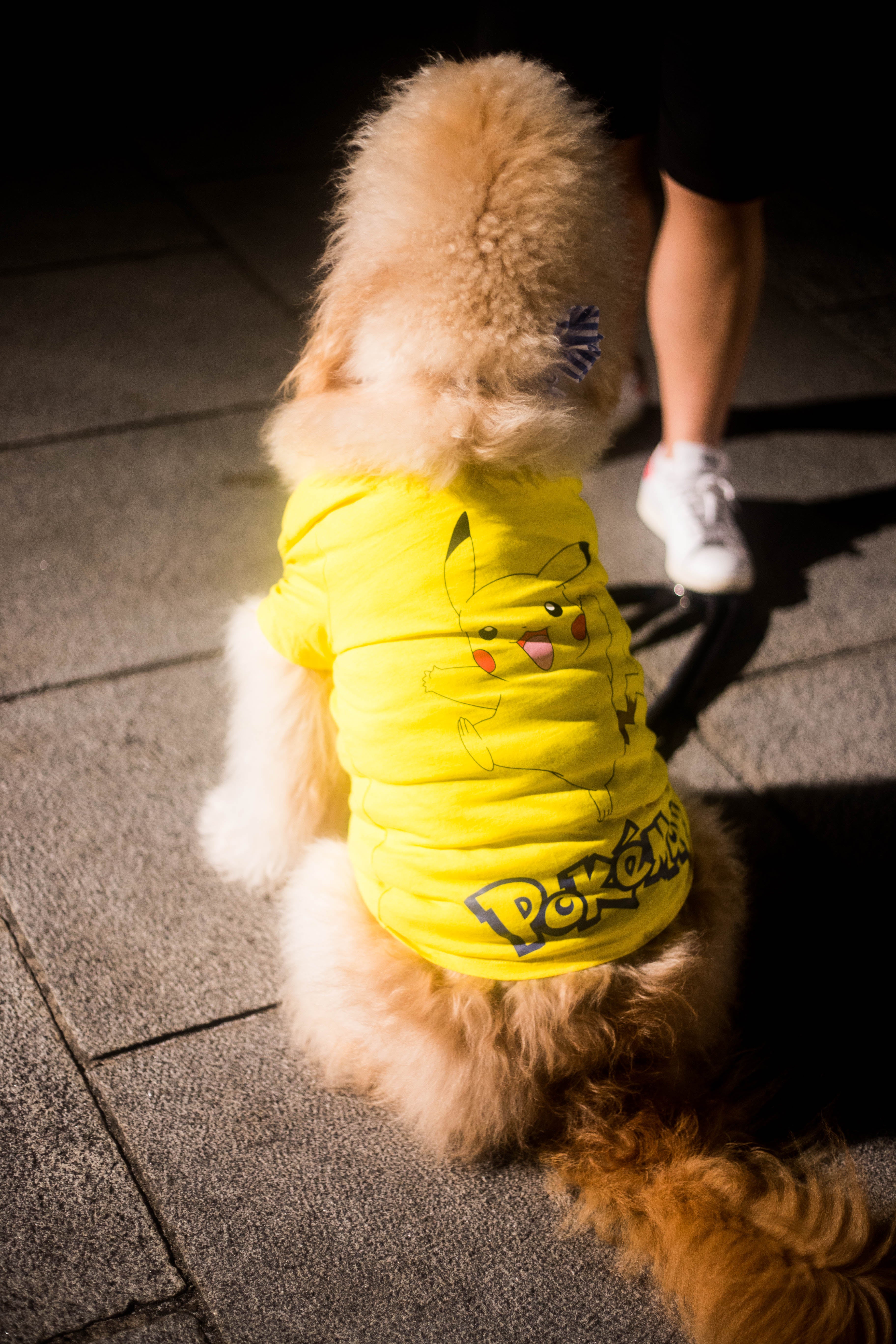 Dehydrated and trying to catch my breath, I look out into the crowd, only to see something so cute that it could give a forest of dancing Pikachu a run for its money: a dog wearing a Pikachu shirt.

Sky, the Pokémon-loving dog, gives me strength. Sky’s owner, Kentaro Ohmura, is one of many Yokohama locals who attend the festival each year. 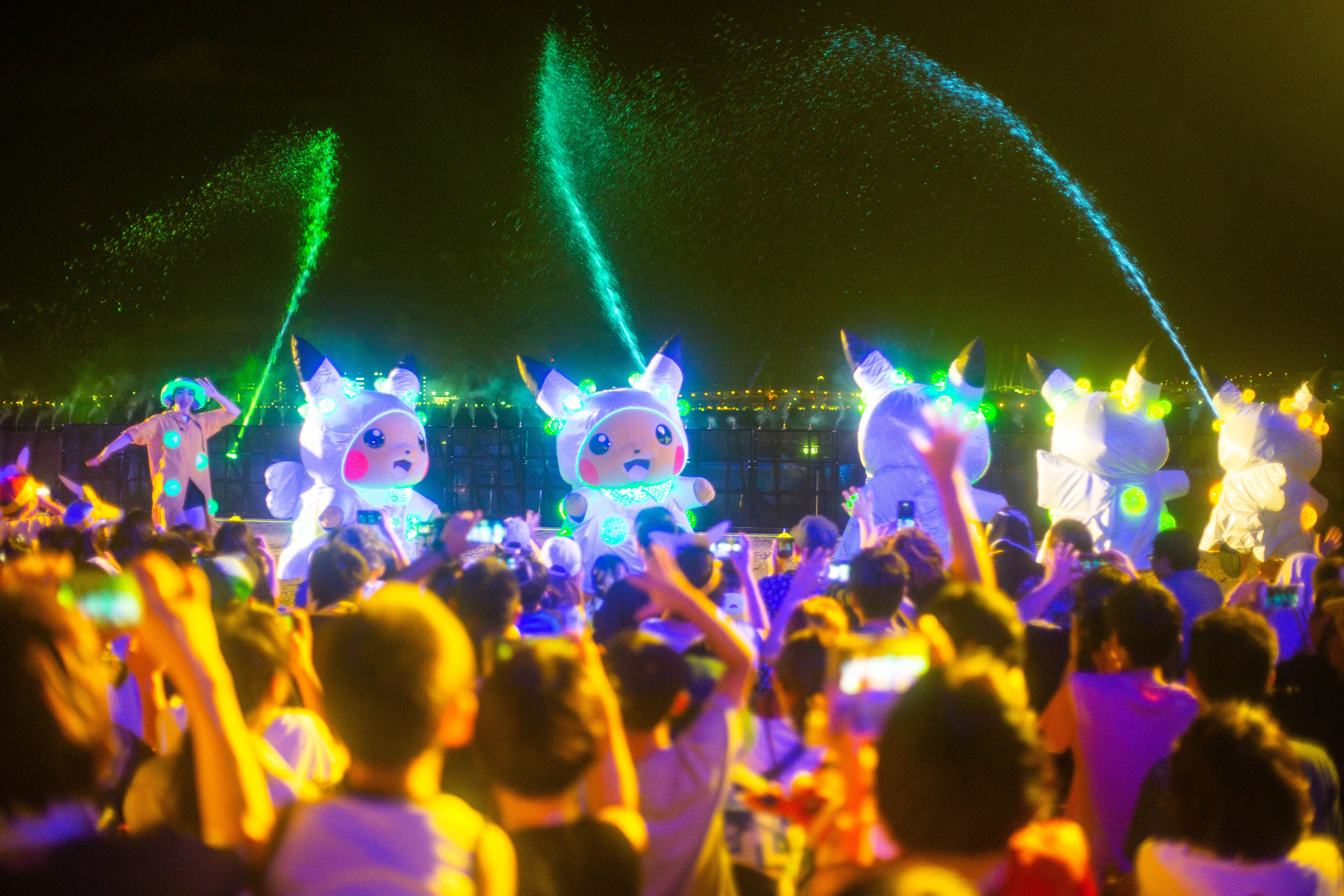 In the crowd for “The Seas,” there’s an actual splash zone. During the performance, fountains shoot water from the ground, illuminated by pink and blue spotlights while the Pikachu twirl against a beautiful backdrop, the Yokohama Bay Bridge in view. Energised by the euphoria of watching the dancing, LED-clad Pikachu, the crowd darts back towards town. On the way over is a POKÉGENIC mural, where fans can pose for photos as Charizard. I come across another giant Pikachu inflatable, which signifies where a performance will take place. I thought I was in the right place for “The Streets,” but I was wrong. 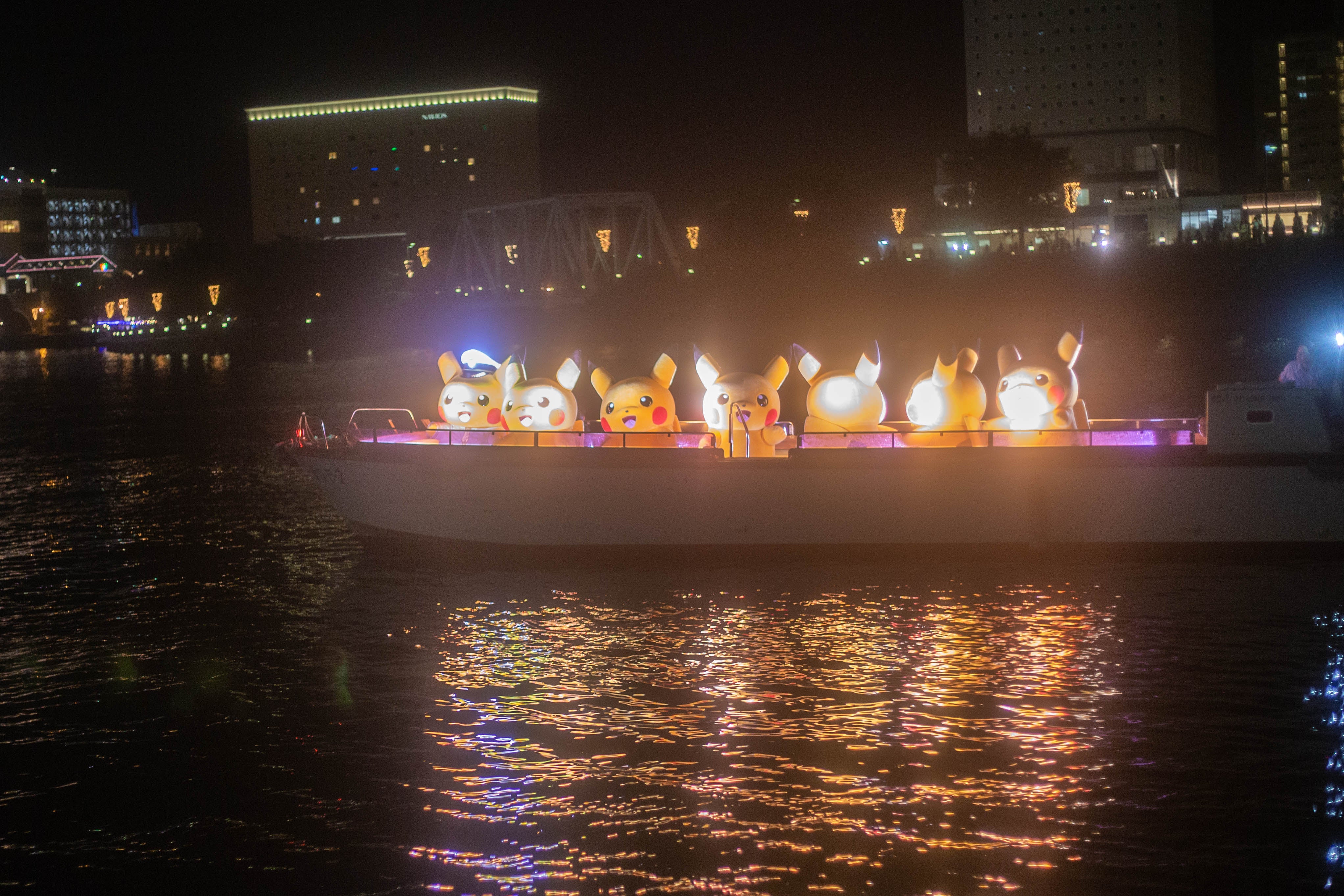 It’s a happy accident, though, because I get to catch the tail end of the Pikachu parade. 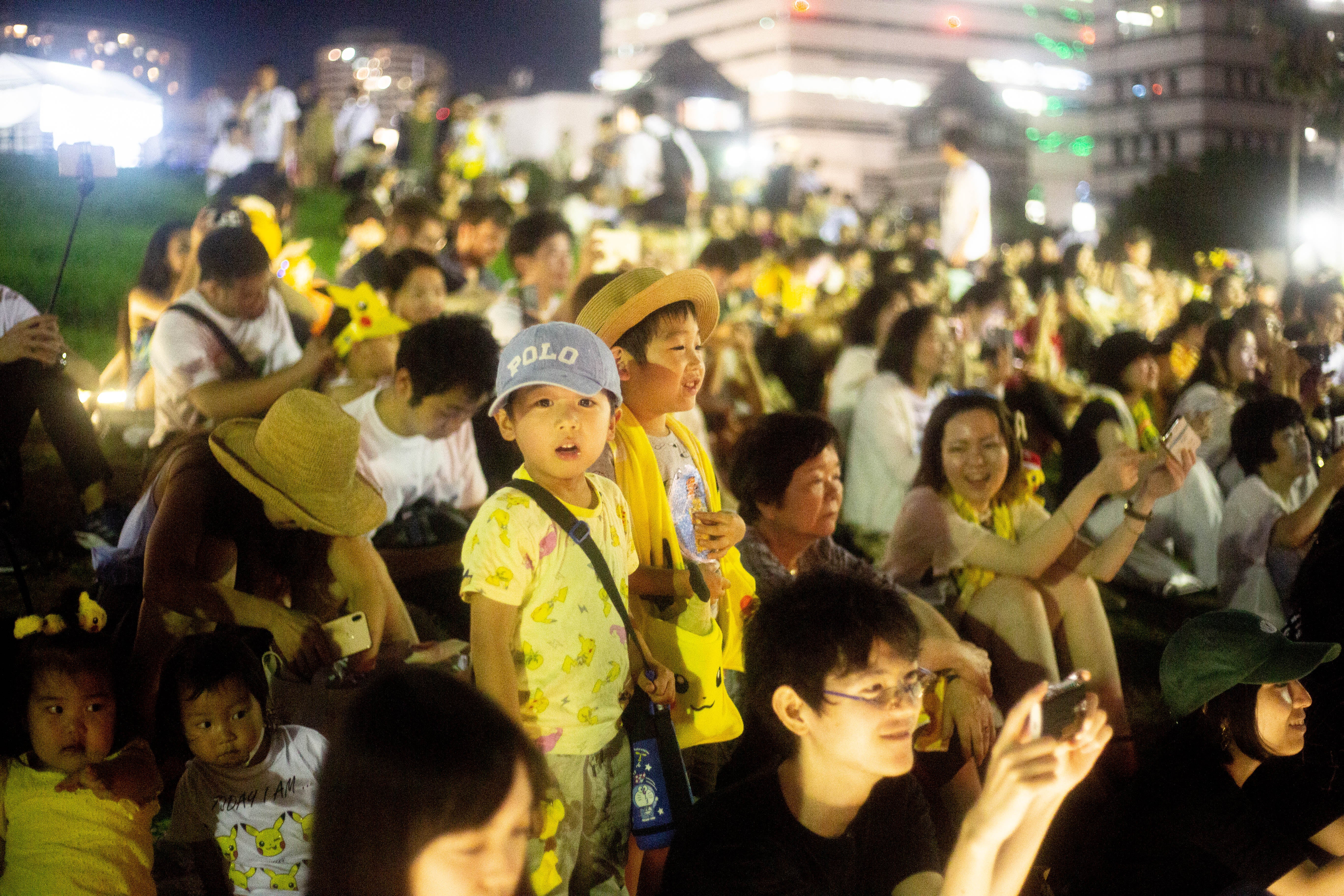 The crowd waves goodbye to the Pikachu as they hop into a boat and sail across the bay for their next gig.

After my cuteness-filled detour, I run (again) to the Yokohama Museum of Art, where colourful, Pokémon-themed artwork is already being projected onto the façade of the building. “The Streets” is the longest of the performances, and it’s the most impressive, too. Sure, the appeal of cute dancing Pikachu is vast, but when you pair them with professional breakdancers, spinning on their heads while the Pikachu cheer them on. I want to see the Eevee Parade, but again, the short intervals and long distances between the performances make it hard to catch them all. But perhaps this set-up is intentional by design. The festival is called Pikachu Outbreak for a reason: because it’s an outbreak of complete mania, and anything less than an overwhelming influx of Pokémon wouldn’t live up to the hype. 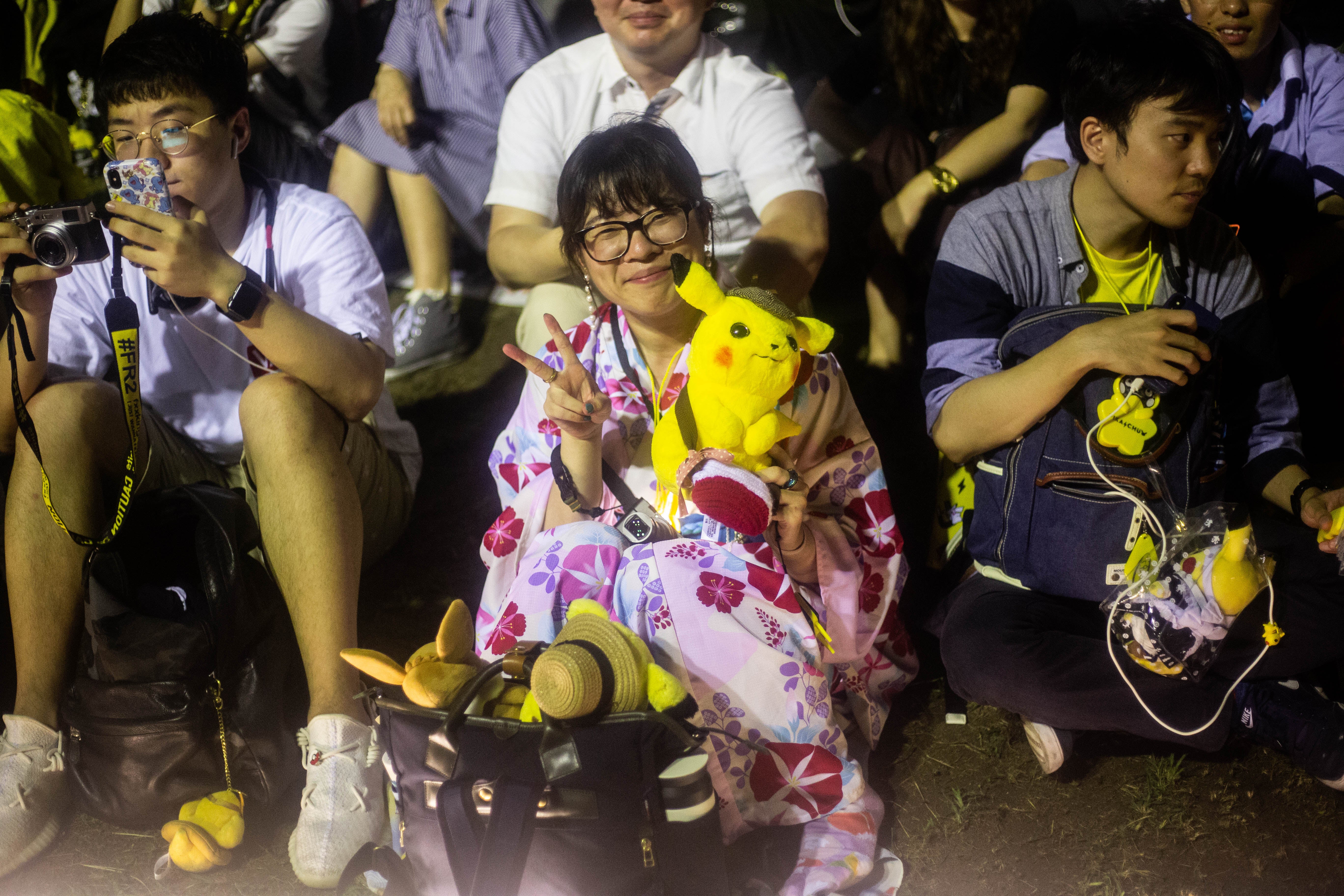 I’m still not sure why Pikachu Outbreak exists, and I’m shocked that it’s possible to pull off such a hectic event without a hitch (as long as none of the costumes deflate). But if the goal of the event is to bring people joy, then consider that goal met. It comes as no surprise that there’s nothing as joyful as a horde of Pikachu strutting their stuff.