As I’ve recently put on record here, I think Tokaido is the best digital board game. Its stay at the top might be short-lived, though, because Raiders of the North Sea, out this week on PC, Switch and mobile, is very good.

I reviewed the board game last year, and loved it; it’s since become one of my all-time favourites, a regular on my crew’s rotation to the point we’ve now got all the expansions and even a fancy game mat. All of which I’m saying to make this clear: I am starting these impressions from a position where I’m already a very big fan of the game.

Even taking that into account, though, this is still a terrific adaptation. Like Tokaido, it’s just the right kind of game for this type of conversion, complex enough that it has a world and characters to bring to life, simple enough that it’s perfect for putting on your phone and killing 20 minutes with when the opportunity arises.

And like Tokaido, it’s a game where the primary challenge is against the game’s design and systems rather than direct interaction, so you’re not missing too much by competing against an AI rather than a human opponent.

The best thing Raiders has going for it, though, is simply the quality of the adaptation. The worst board game conversions are lazy ones, that simply recreate the tabletop experience and do little more (Terraforming Mars’ recent outing being a big offender), and the second-worst are those where even if a bit of effort has been put into the adaptation, the board game was simply not suited to the particular strengths (and weaknesses) of a video game platform in the first place.

I’ve already explained how Raiders gets past the latter issue, and the former is taken care of with a beautiful digital conversion of Mihajlo Dimitrievski’s iconic series art, which brings the game’s coastal map to life with moving ships, animated sieges and flowing water.

Wait, what’s this game about again?

Raiders of the North Sea is a simple but elegant worker placement game, where the objective is to gather crew and provisions in your home region before setting out to raid the surrounding countryside. It’s played by putting a worker down on a building to perform its action, then picking up a different worker to perform a second action. That’s it, that’s literally all you do, and it’s great.

You can read our review of the board game here.

Perhaps to make the whole package seem a bit more video gamey, Raiders has added a campaign mode, something the board game original doesn’t have. It’s nothing big, so don’t expect cinematic cutscenes or 3D action sequences. Instead it gives you ten missions that mess with the core game’s rules, giving you challenges like playing on a smaller map or adjusting the worth and scarcity of certain resources. Like I said, it’s nothing major, but for experienced players (or those looking for a bridge between the tutorial and a full game) it’s a fun little addition. 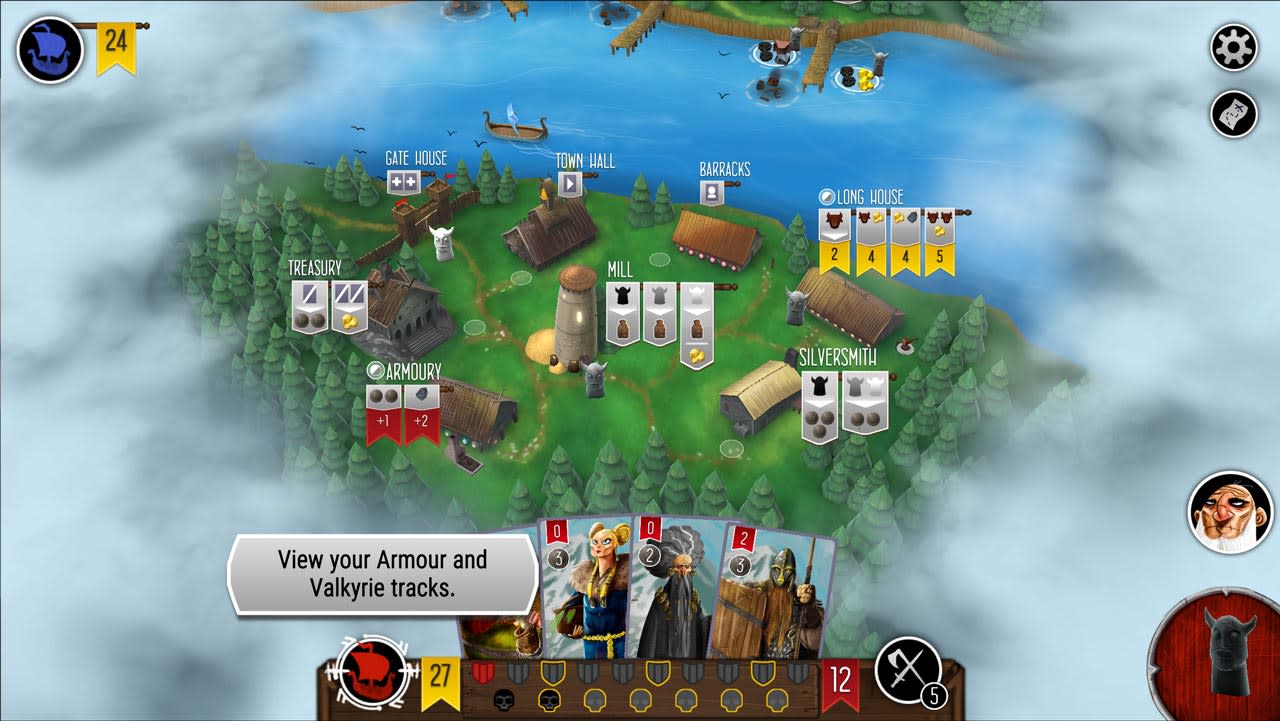 I’d imagine the bulk of players' experience though will simply be playing sessions in the main, full game. Since I’ve already reviewed it I’m not going to go over it again, but what I will say is that controlling Raiders couldn’t be simpler. You just drag a meeple to drop it, then you drag one off the map to pick it up, while the UI governing your hand of cards, crew, resources and the overall state of the game is fast, clear and smart.

I’ve been playing both the PC and Android versions and, while the PC edition is fine, it’s also more expensive than the mobile editions, which play better anyway since dragging your finger across the screen is quicker and easier than dragging a mouse cursor. The nature of the game, and its quick-save capabilities, also lend themselves more to a mobile experience than setting in for a session on a desktop.

I’m going to give Tokaido some time at the top—both to see this game’s staying power, and whether Tokaido’s long-coming Crossroads expansion ever makes it to mobile—but for now Raiders is mounting a serious challenge as one of the best mobile board games out there.