Earlier this week, the Call of Duty Twitter account tried to build hype for today’s Modern Warfare multiplayer reveal by announcing the return of killstreaks, which grant players access to tide-turning super weapons if they play well enough. Among these super weapons is white phosphorus, a chemical substance that can be used as a self-igniting weapon, causing everything from nightmarish skin burns to organ failure. It’s forbidden to use in civilian areas by international law.

In the new Modern Warfare, it’s effectively a cool toy. This didn’t sit well with some members of the series’ community, who were expecting that the new game, described by developers as a darker, more intentionally uncomfortable take on the inherent ugliness of war, wouldn’t be so cavalier in its depiction of a weapon that’s been used to commit heinous atrocities in real life. But single-player Call of Duty and multiplayer Call of Duty have historically been different animals, and this game appears to be no different on that score. During a multiplayer reveal event this week in Los Angeles, Infinity Ward audio director Stephen Miller and art director Joel Emslie told Kotaku that the game’s single-player campaign and its multitude of multiplayer modes—while linked by shared progression systems, weapons, systems, and fictional settings—are aiming for decidedly different tones.

“It’s kind of like if you’re watching a film or a play, and you have different types of actors,” said Miller. “You can have somebody who’s a very serious, heavy actor, and maybe you have somebody else who’s more comic relief or whatever else. It’s all still part of the same universe, but you get a little different tone.”

“They all exist in the same universe,” said Emslie. “They all have commonalities. They may use certain things, but for different purposes... If you look at narrative, its purpose is to tell a really deep story and make you care about these characters, these people. The campaign gives relevance to the rest of the universe around it. So in multiplayer, you may see things that are derived from it, that have more meaning that way. Like ‘Oh, I know why that exists.’ Or you may see the Juggernaut Suit in narrative. It might show up as a character and do something. So they’re kind of coming from different centres with different purposes.”

Historically, Call of Duty’s single-player campaigns have played out like explosion-ridden popcorn flicks with the occasional, single-tear-stained nod in the direction of something more sombre. For example, there’s the Modern Warfare 1 mission in which the player slowly dies in the irradiated aftermath of a nuclear explosion, and Modern Warfare 2’s infamous “No Russian” level, in which the player plays as an undercover agent who participates in a mass shooting terrorist attack on unarmed civilians. Due to the campaigns’ broader focus on over-the-top action and setpieces, it’s been relatively easy for campaigns and less contextualised multiplayer modes to coexist. This time around, however, Infinity Ward is positioning the campaign as a series of more realistic and harrowing storylines focusing on the difficult situations faced by soldiers as well as the civilians whose homelands have been torn apart by the ravages of war. Thus, the dissonance between the campaign’s tone and the multiplayer is more visible, with sparks flying from the friction. 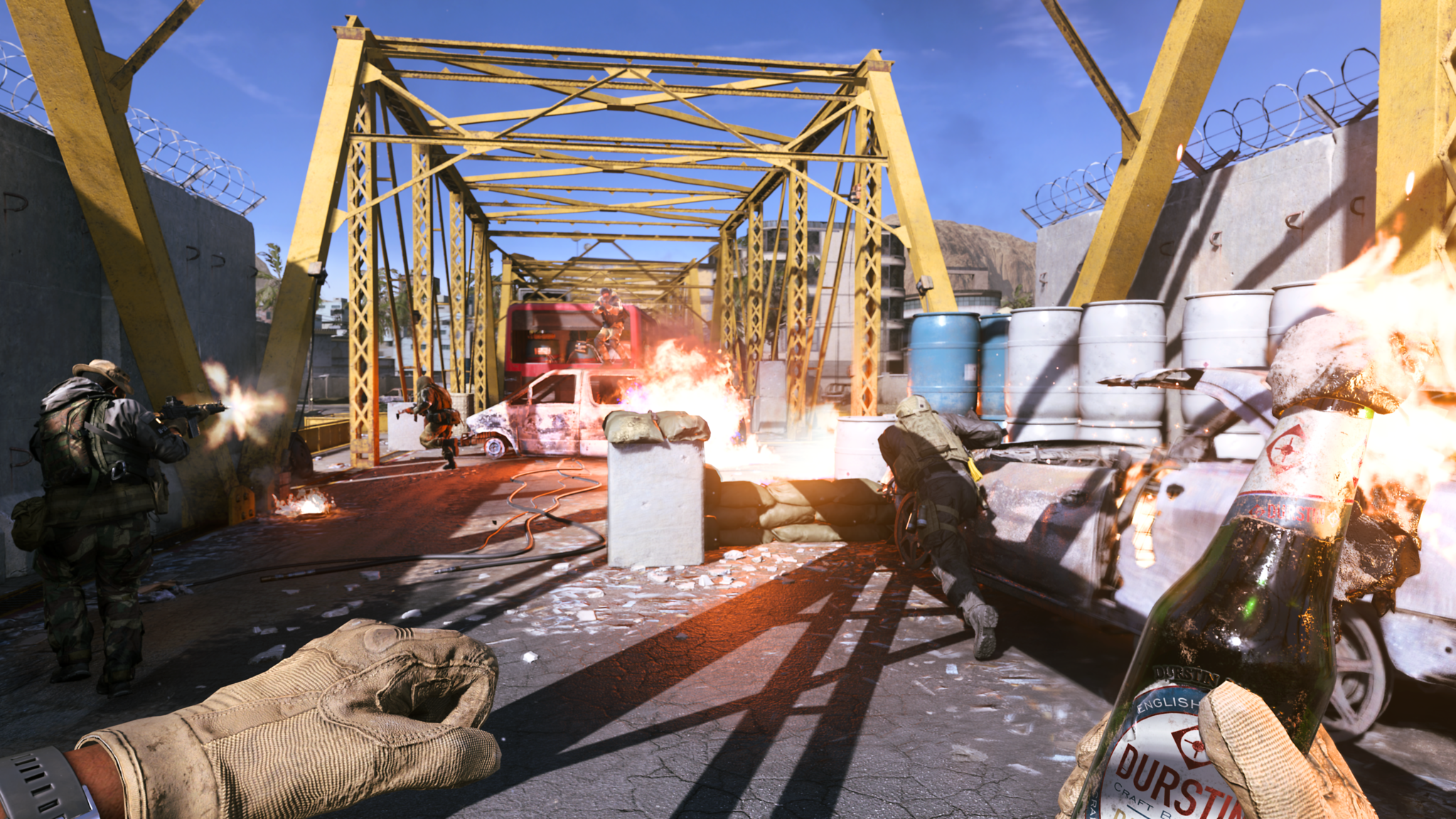 In any case, when it comes to including controversial features like white phosphorus, the multiplayer team is largely sticking to its guns.

“I mean, you notice a nuclear bomb go off at the end [of the multiplayer trailer],” Emslie replied when asked about the online reaction to the white phosphorus killstreak announcement. “So I think it’s a mature game. It deals with mature mechanics. There’s a lot of stuff in there like that. At the end of the day, it’s a piece of entertainment... That’s a killstreak like any other killstreak. It’s a video game. It’s a first-person shooter in a war environment.”

While taking multiplayer for a test drive, however, it was hard for me not to feel a little weird about it all. Certainly, matches were thrilling, with a focus on new “Gunsmith” weapon customisation and new modes like night vision skirmishes where you’ve got to make sure your laser sight doesn’t give away your position. During one game of team deathmatch on an outdoor desert environment rife with ruined residences, somebody on the enemy team dropped a white phosphorus attack on my team. My character began to cough and lose health. Panicked, I ran inside an abandoned house and tried to close the doors, but my character kept wheezing. Eventually, the effect dissipated, and everything went back to being business as usual.

“All the civilian stuff is kinda more over here in the narrative world. I don’t think it was ever a big goal for the multiplayer team [to incorporate the campaign’s ideas].”

In Modern Warfare’s multiplayer, I imagine white phosphorus will prove to be a very effective method of zone control, with the game’s maps emphasising advantageous positioning over symmetry and other hallmarks of multiplayer level design. If you want to free up a key spot, you can build up a killstreak and drop some white phosphorus to force your enemies to hoof it to a safer spot. But in my experience, it functioned like a glorified poison cloud, not a devastating weapon that melts flesh from bone. In this moment, I took stock of where my character was; he had taken refuge in an abandoned civilian home in a town teetering on the brink of oblivion.

I thought back to another war shooter that featured white phosphorus as a player-controlled artillery option: 2012's Spec Ops: The Line. In that narrative-driven game, one level saw players use white phosphorus on their foes, only to then traverse the aftermath and discover that they’d indiscriminately laid waste to innocent civilians as well. In one especially harrowing moment, you come across the horrifically burnt body of a mother clutching her similarly burnt child. Masks of horror are etched across what remains of their faces. The mother’s hand covers her child’s eyes.

Modern Warfare’s single-player campaign will force players to face the consequences of actions that lead to civilian deaths—for example, you’ll receive pushback from allies if you accidentally shoot somebody’s baby. But in multiplayer, bombed-out civilian houses and white phosphorus are still just tactical tools, means by which to gain an advantage. 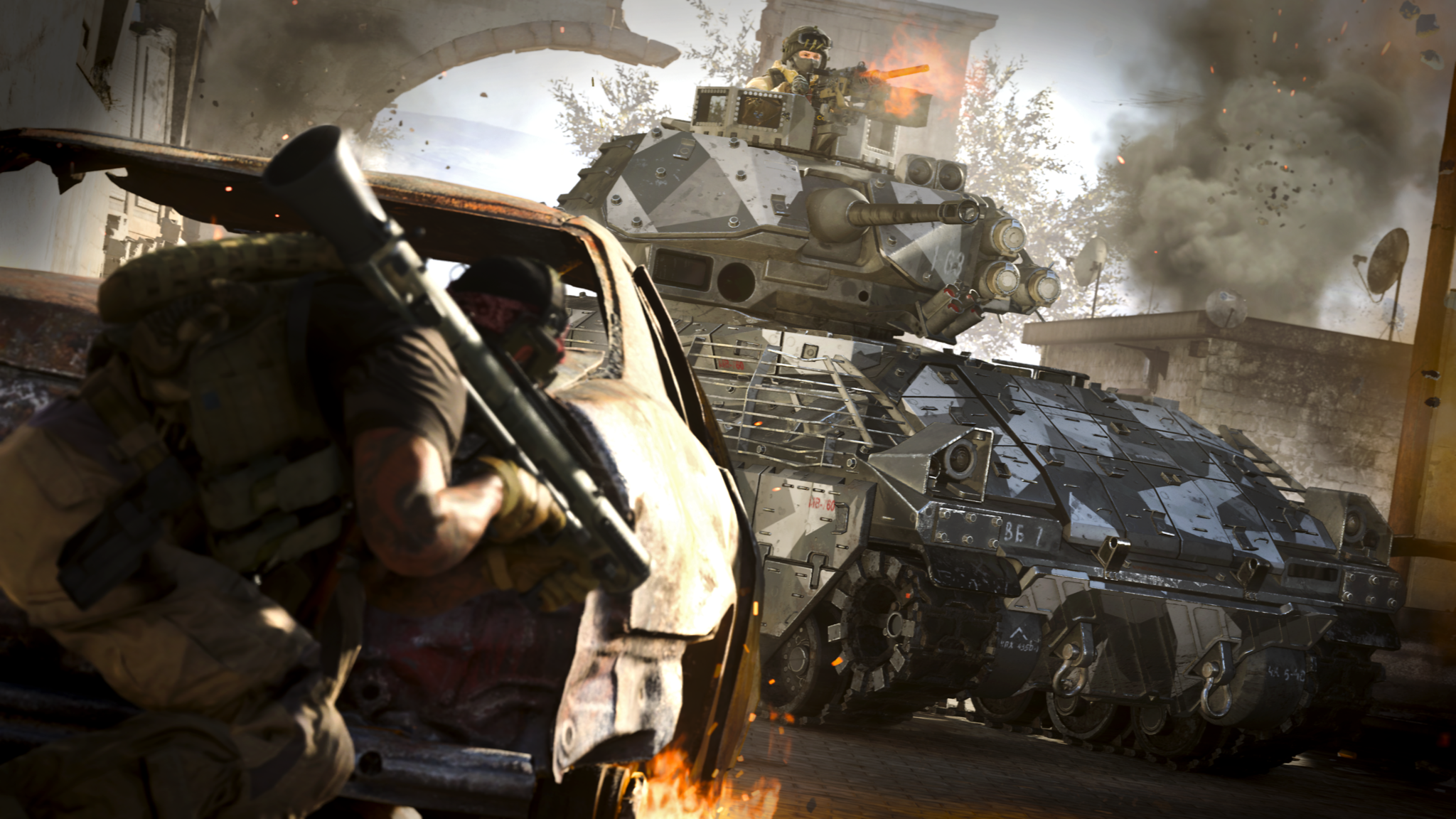 When asked if the multiplayer team ever tried to incorporate more of single-player’s proposed self-awareness, Emslie said that approach was never really on the table.

“I think it was more of a move to add context to multiplayer,” he said. “In terms of trying to sell the narrative as far as multiplayer went, it was probably more of ‘Why are these two factions having a fight? Why is this happening? How did they get here?’”

Multiplayer is, however, intended to be more narratively cohesive than it has been in previous games. Emslie pointed to new first-person cut-scenes that depict players and allies flying into combat zones aboard helicopters and other military hardware. “You enter an environment narratively,” he said. “But we’re basically coming at it from that angle. All the civilian stuff is kinda more over here in the narrative world. I don’t think it was ever a big goal for the multiplayer team [to incorporate the campaign’s ideas].”

That makes a degree of sense. Call of Duty multiplayer is a time-honoured tradition at this point. Messing with the formula too much would inevitably send legions of players into a rage. Still, as this series attempts to take definitive steps into new narrative territory, it finds itself in an awkward spot. Despite the dissonance, Emslie hopes the Call of Duty multiplayer team can do the subject matter justice.

“I think we try to treat it as tastefully as possible, but at the end of the day, it’s supposed to be a fun experience and a piece of entertainment,” he said. “And artistic at the same time.”