Streamer Sparks Debate Over Whether Twitch Should Allow Breastfeeding

When a popular Twitch streamer breastfed her baby on stream last week, clips of the moment ended up getting removed from Twitch, and it sparked a debate about whether or not the practice violates Twitch’s terms of service, with some arguing that breastfeeding constitutes “sexual” content.

Being a parent on Twitch isn’t easy. As independent contractors, parents have to deal with inconsistent work hours, unreliable pay, a lack of healthcare, and a general lack of safety nets should anything go wrong. Streamer, YouTuber, and model Heather “HeatheredEffect” Kent took three months off after her daughter Margaux was born last year. Twitch doesn’t offer any form of maternity leave, so she just had to take the hit to her bank account and audience. Now she’s run into another complication: During a stream last week, she decided to breastfeed Margaux while chatting with a friend.

On the same day as the stream in question, another clip in which Kent and her friend discussed a Sports Illustrated modelling audition got posted to the Twitch clip repository (and drama crockpot) Livestreamfail. In this clip, Kent was casually breastfeeding her baby, calling no attention to the act itself. The clip’s poster, a fellow parent and fitness streamer who goes by the handle TominationTime, had good intentions, titling his post “Normalizing Breastfeeding On Twitch.”

It was not well-received by many of the posters on Livestreamfail, some of whom jumped to accuse breastfeeding streamers of “using their children as an excuse to flash tit” and “make money” from exposing their bodies.

Kent says that Twitch took the clip down that day. (Twitch has yet to respond to a request for comment.) Kent reposted the clip on Twitter and discussed its removal, writing that “we obviously have a long way to go in the fight to normalise breastfeeding” and noting that an episode of Mister Rogers’ Neighborhood once featured on Twitch’s front page focused on breastfeeding much more than her own stream. “Where was the outrage when Twitch streamed the Mister Rogers’ Neighborhood episode about breastfeeding on the front page?” she asked. 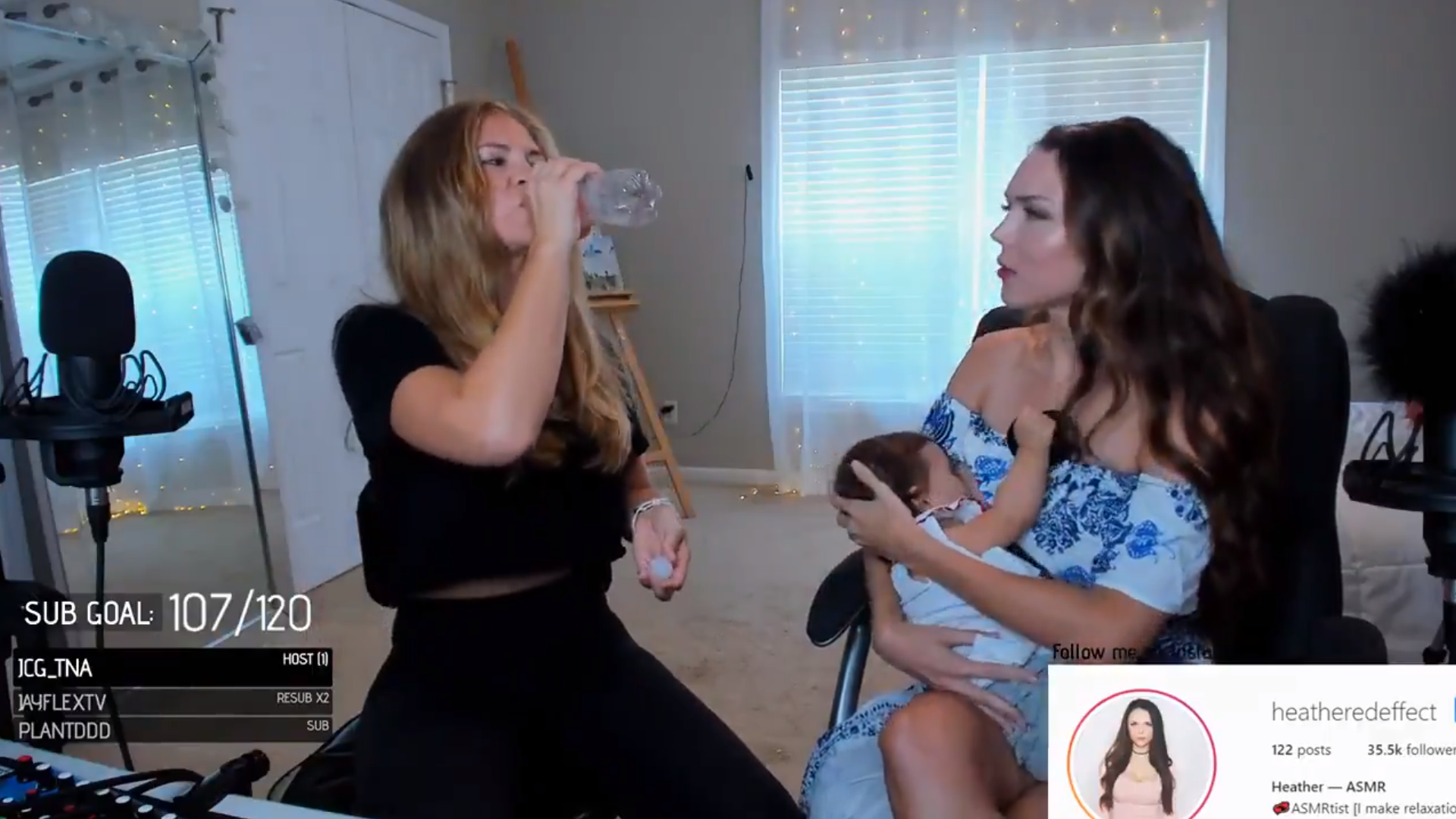 Speaking to Kotaku on the phone late last week, Kent described herself as “not really a huge political movement type of a person.” Nor, she said, is she somebody who regularly feeds her daughter on stream, typically opting to instead stream at night, when Margaux is asleep. In light of all the furor, however, she feels like she can’t just stay quiet.

“I thought that I would get some creepy comments, because it’s Twitch,” she told Kotaku. “But I’ve honestly been shocked by the negative community reaction as a whole. It seems like there’s a lot less people coming to my defence in terms of breastfeeding, and it’s been a little shocking and a little demoralising and kind of sad. It’s actually put me in a corner where I feel like I actually need to take a stand for this, because clearly there’s a lot of minds that need to be changed or enlightened when it comes to breastfeeding, I think there’s still a lot of things that are misunderstood.”

For example, breastfeeding in public is legal in all 50 US states. It’s also allowed on other social media platforms like Instagram, whose rules state that “breastfeeding is natural and beautiful, and we understand that it’s important for mothers to be able to share their experiences” before concluding that “the vast majority of these kinds of posts are following our policies.”

On top of that, Twitch has not instituted any sort of blanket ban on revealing wardrobe choices. Instead, Twitch now decides whether or not people end up in shirtless stream jail based on context. “[We] will consider not just the attire itself, but also the contextual setting in which it is worn and the intent of the person wearing it, when moderating content,” read Twitch’s rules. This is why an IRL streamer can, say, be shirtless in a gym setting—something TominationTime, the male streamer who shared the initial clip of Kent breastfeeding on Livestreamfail, regularly does.

Despite this, commenters on Reddit and Twitter continue to insist that Kent should have expected an enraged mob and trigger-happy Twitch moderators. They’ve taken to comparing it to using the bathroom. Streamers can walk off-camera for a minute or two to do that, the reasoning goes, so why can’t Kent do the same for breastfeeding?

“People are like ‘Pooping or peeing or whatever, that’s a bodily function. You can handle it like you handle those,’” she said. “That’s not even the same thing. First of all, those are human waste products. They don’t do the same thing breast milk does, and also you can’t just pee in public or throw up in the public. You can get fined for doing that. You cannot get fined anywhere in America for breastfeeding your child.”

That argument also implies that breastfeeding is quick and easy—consistently doable in the span of time it takes somebody to get up and use the bathroom. That, said Kent, is not the case, and folks can watch her full stream archive if they want evidence.

“They want to show their nipples so much that they’re willing to get pregnant, be pregnant for nine months, and have a child, just so they can breastfeed on Twitch to steal your views. Do you really think that’s what women want to do?”

“I want to go and add the minutes that she was on the boob awake,” she said. “It seemed like an hour and a half. A majority of the time she’s on and off the boob, because that’s what babies do. You can’t control that.”

A brief break is already guaranteed to lose a streamer at least a handful of viewers. An hour or more is untenable. Popular streamer mOE (and many others) have suggested nursing covers as a be-all, end-all solution to the nudity issue, but even that’s not a sure thing, said Kent. “As they get older, they rip the covers off,” she said.

What Kent takes the biggest issue with, though, is the sheer number of people suggesting that this was, intentionally, about sexualisation, and that if breastfeeding on stream is allowed that Twitch will be soon be flooded with women using newborn infants as Trojan Horses to deliver the ultimate payload: the dreaded Exposed Female Nipple.

“They actually think that a woman will take medicine to lactate and then somehow find a child to breastfeed just to show their nipple,” she said. “Or… they want to show their nipples and evade terms of service so much that they’re willing to get pregnant, be pregnant for nine months, and have a child, just so they can breastfeed on Twitch to steal your views.”

“Do you really think that’s what women want to do?”

The Twitch community is more than 80 per cent male, and many men tend to view women’s bodies as sexualised objects first and foremost.

Kent feels like, ultimately, many Twitch viewers don’t like the idea of not being able to fit women into neat little boxes. They like seeing a baby on stream, but if there’s an element of that interaction that doesn’t fit their idealised perception of motherhood, it crosses too many wires. “It seems like you can’t win either way,” she said. “I’ve had people come into my chat knowing that I’m a mum and being like ‘Where are your kids?’ And then I have my baby on stream, and I breastfeed her, and they’re like, ‘Oh my god, no, you’re using your boobs. You’re exploiting your baby for views.’”

Twitch, said Kent, stopped deleting clips of her breastfeeding her daughter after two days. She still hasn’t heard from any Twitch staff, though, and she thinks the company could do more to speak up in support of women in her position. 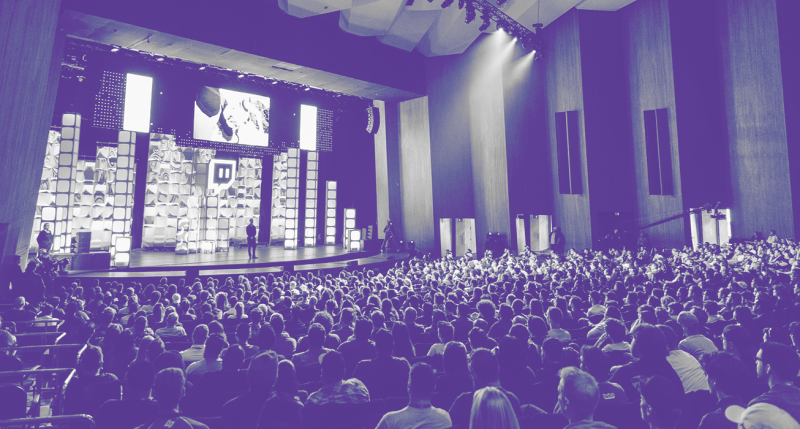 “I think it would be very helpful if Twitch took a stand to support mothers,” she said. “I think they have an opportunity here where they can... support women on their platform and just say, ‘Hey, if a woman is actively breastfeeding on our platform, we are fine with that.’”

While Kent says she’s been called a “whore” and accused of setting women back decades, she’s also received sporadic support from fans and other smaller streamers. Still, she feels like bigger personalities have either been combative or stayed silent, and that bums her out.

“There are influential people on the platform that could take the side of choosing to support mothers,” she said. “It’s really hard just as one person with not a lot of support, just arguing with these people that have no idea about breastfeeding, or how it works, to educate an entire audience.”

She hopes, though, that it ends up being worth it—that maybe she can at least give a little encouragement to other mums on Twitch, if nothing else.

“Some woman that’s streaming right now might be pregnant, and it might be how she makes all of her money, and she’s really struggling with ‘What am I going to do once the baby is here?’” she said. “Maybe there’s a single mum, and she doesn’t have the ability to just stream at night and totally mess up her sleep schedule. So if what I’m doing can somehow empower someone else or change the narrative or make Twitch take a stand, then I would be very happy that it happened as a result of this.”