Some of Fallout 76’s most devoted players and biggest spenders appear to be drawing the line at a new £22 bundle of cosmetics up for sale in the game’s digital store.

Conspicuous consumption is alive and well in Fallout 76’s wasteland thanks to the Atomic Shop, a clearing house for a range of character outfits, camp furniture, armour paints, and more. The storefront, which helps pay for the game’s continued development and content updates, all of which are free, has been a source of tension from the start. No matter what else was wrong in the game, new microtransactions were getting added all the time via this storefront, ranging from beer hats to decorative Deathclaw pelt rugs. This week’s additions, which include the particularly pricey Free States Trailblazer Bundle, have inspired players to post online about how they believe a better balance needs to be struck.

The newly added bundle, which costs 2,800 Atoms, or the equivalent of £22.40 worth of Atom packs, is technically made up of two other bundles: the survivalist bundle and the Revolutionary bundle. Each of these bundles is 1,800 Atoms by itself (£14.40) and includes weapon skins, Power Armor paint, unique backpacks, and other cosmetics. The Trailblazer bundle also has one thing those other two bundles don’t have: a golden Free States flag. 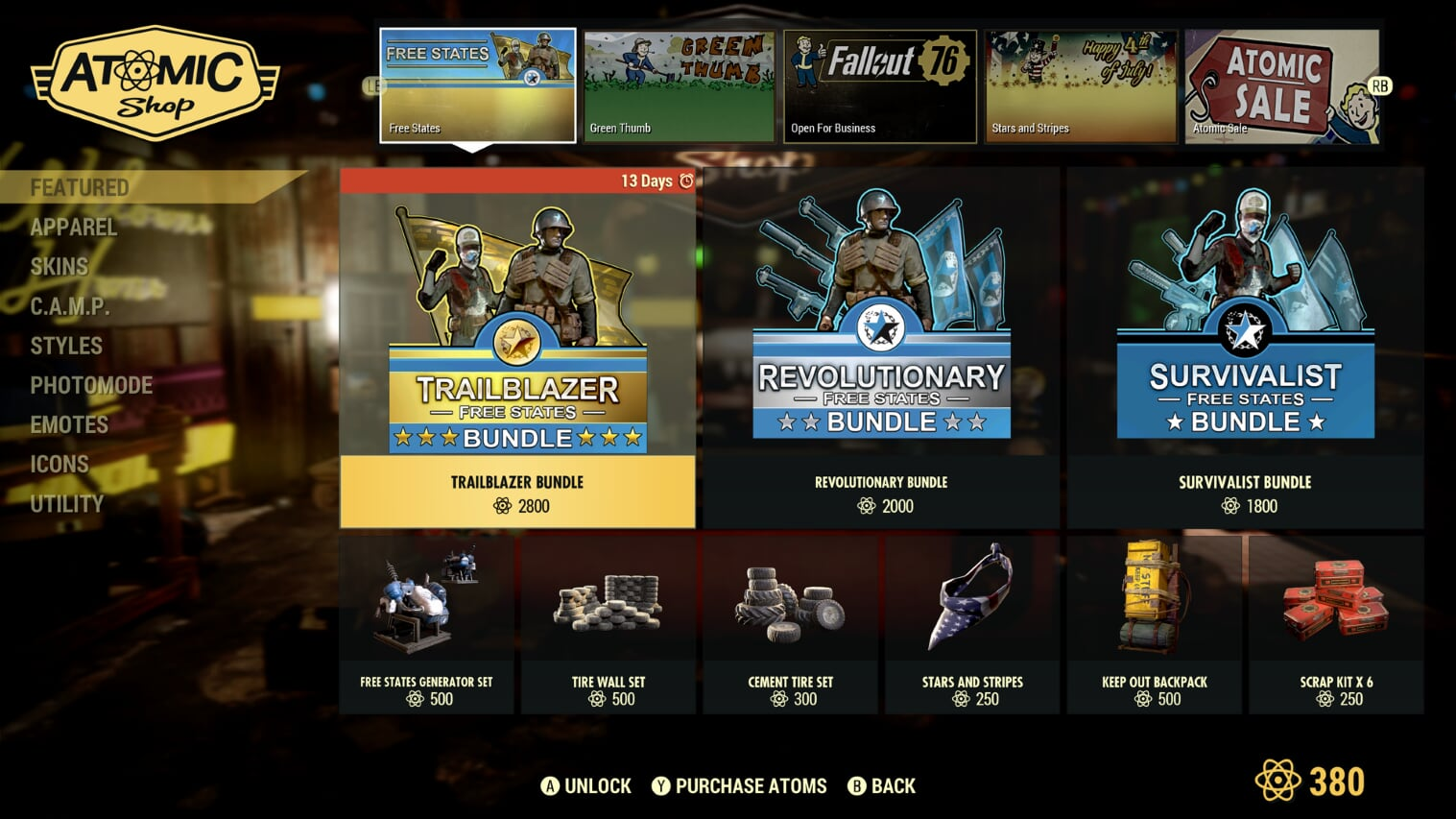 Since all of the items come as part of a bundle, any player who wants just a couple of them still has to buy the whole thing. If you first buy one of the smaller bundles, and then decide you want the Free States gold flag, you don’t get any discount based on the stuff you already bought. Structuring the microtransaction in this way both incentivises hardcore players to spend the extra money, which costs more than a paid DLC price for most games, while also discouraging those with a more casual interest who might spend a pound here or there but aren’t willing to go all in on a big bundle. The bundles are also a limited-time thing, with no word on when the items contained in them will cycle through the shop again in the future. It’s a strategy reminiscent of the infamous Santa Claus outfits released last December, which were discounted from 3,000 Atoms down to 2,000, despite never having been sold at the list price previously.

The Trailblazer bundle also comes at a time when the game’s most recent update introduced a bunch of bugs. Bethesda, which did not respond to Kotaku’s request for comment, announced today that fixing these bugs will delay the game’s next content update into August. The company has also slowly been adding “utility” items to the Atomic Shop that allow players to spend real money for in-game shortcuts like repairing gear and efficiently transporting and scrapping crafting resources. With players hungry for a new in-game activity, others upset about new glitches, and many already sceptical of the Atomic Shop’s increasingly aggressive sales pitch, the latest bundle sale has resulted in a fair amount of complaints online. 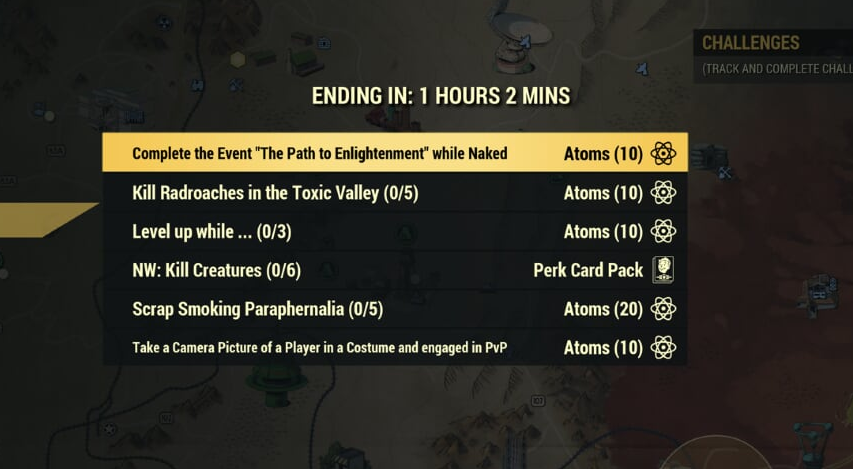 Daily Challenges can be tedious and don’t reward many Atoms relative to the prices in the Atom Shop.

“I am a whale. I’ve bought almost every bundle that has been released in the Atomic Shop since launch,” wrote Glorf12 on the game’s subreddit. “The Free States bundle is where I draw the line. This shit is not fun. I want to PLAY THE GAME for a reward. Not just throw my wallet at you.”

Bethesda recently changed how some Challenges work in the game, replacing the Atoms players could previously earn for completing them with aid items and other gear useful to newcomers who are just starting out. Currently, it can take weeks to earn the Atoms necessary to buy stuff in the in-game store. As Glorf12 and others have suggested, one way to get around that is to make more of the items sold in the Atomic Shop earnable in the game itself by completing certain questlines.

Others have suggested temporarily boycotting the store and its new bundles to send a message to Bethesda. “There’s a great number of us, especially here, that don’t want this game to fail,” wrote a player who goes by Paladin1034. “But I think it’s folly to keep supporting their shop while they leave game-breaking bugs and balance issues unanswered.“

It’s refreshing that Fallout 76 doesn’t have loot boxes, but its current microtransaction economy is still far from perfect and, according to these players, something needs to change.