The most dedicated players of 2009’s Assassin’s Creed II could stray from the Italian Renaissance adventures of Ezio Auditore to solve puzzles that unlocked a 37-second video of a naked Adam and Eve running through a high-tech city in some unknown year BC. That’s the kind of stuff they used to put in Assassin’s Creed games, and how wonderful it is to see a new Assassin’s Creed finally go that wild again.

The sixth and final paid expansion to 2018’s Assassin’s Creed Odyssey is the deepest of dives into the series’ weird lore. Dubbed the “Judgement of Atlantis,” it’s part three of the game’s “Fate of Atlantis” add-on that takes players into otherworldly realms set apart from the main game’s largely realistic ancient Greece. In “Judgement,” you do indeed go to Atlantis, where you talk to, fight with, and read text logs from the Isu, or First Civilization, the high-tech precursor race that, according to AC lore, preceded the rise of humanity.

It’s a delight for any AC players who miss the weird stuff or who want to know more about the scientist Consus’ Shroud of Eden. (You don’t? Come on.) It’s a handhold of hope that the architects of this series are done minimising the parts of the saga that are set outside of marketable adventures. Here, we go beyond attractive people killing in picturesque historical locations for a handful of playable big-budget hours to spend amid the Isu. Whoa. Did that text log just mention Eve? 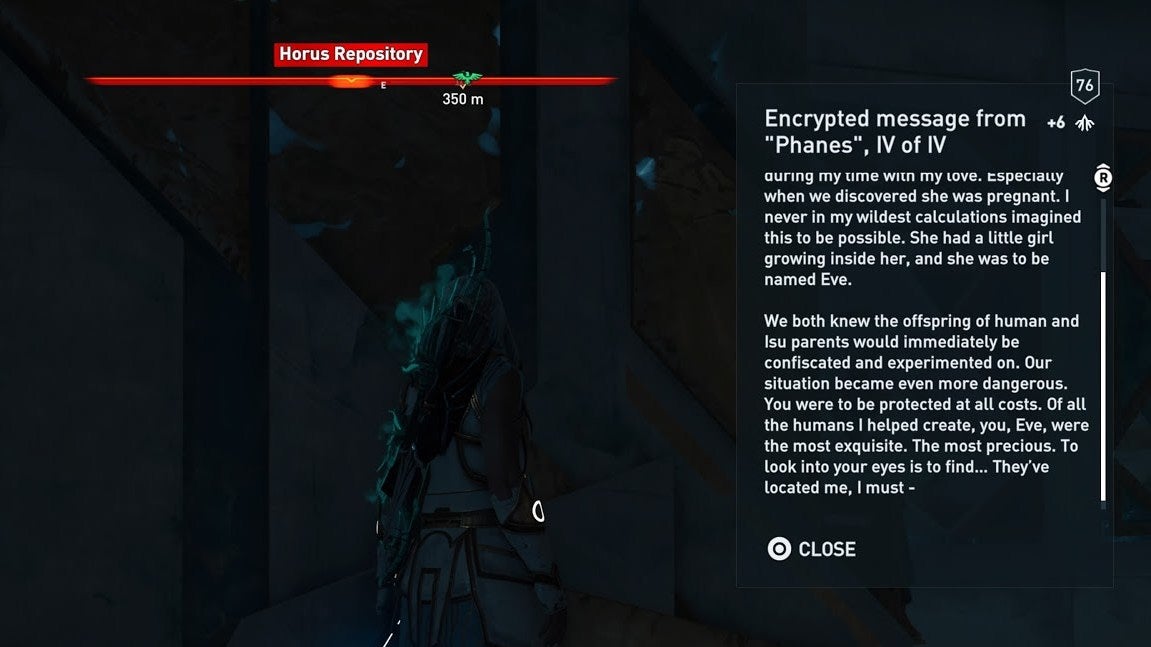 Isu stuff was never front and centre in AC games. Moments regarding the Isu were rare even in the old games and diminished more in recent ones, never offered as more than a mysterious dialogue sequence, a sudden apparition, or some peripheral plot device to hint at a grander scheme of ancient, powerful people manipulating human history.

“Fate of Atlantis” offers franchise whiplash. Suddenly, we have more than seconds or minutes to indulge in the Isu. We’ve got hours and an entire city of them to explore. Atlantis is governed by Poseidon and Atlas, who, in the conceit of the franchise, were taken to be deities by people but are actually just Isu. Humans and Isu live uneasily in Atlantis, the Isu barred by their current rulers from experimenting on humans, the humans understandably ready to rebel because that’s what the Isu did.

Much of the “Fate of Atlantis” three-parter is standard Odyssey, which itself is a gameplay replica of the franchise-changing formula offered in 2017’s Assassin’s Creed Origins. The player’s character, Alexios or Kassandra, can climb nearly any vertical surface, will find numerous well-guarded locations full of loot, and can take on stacks of quests and sidequests to learn more about the area they’re in. The first two parts were set in stunning versions of the afterlife realms of Elysium and Hades and offered adventures that pointed to a bigger encounter with the Isu.

The final episode of “Fate,” “Judgement,” focuses on the idea that our hero has travelled to Atlantis and been appointed by Poseidon to be a Dikastes, or judge, of the local populace. Early quests involve helping Atlas’ brothers deal with rebellious humans and investigating murders blamed on a human woman even though the victims appeared to be mauled by an animal. Almost everything involves a mix of dialogue, climbing, and killing.

In addition to its narrative adventures, the overall structure of “Fate” offers players sidequests that let them obtain alternate versions of combat abilities. Three more of those show up in “Judgement,” all of them spicing up a combat system that has grown stale over the Origins’ and Odyssey’s cumulative 200+ hours. My favourite new move in “Judgement” lets me drop a doppelganger version of myself onto enemies for an instant kill. “Judgement” also gives players access to a collectible that they can cash into create some extraordinarily powerful weapons. I’ve now got one that causes every enemy within a small radius to take the same Assassin damage as my target, meaning I can sneak-stab one guy to death and cause two of his buddy guards nearby to drop as well. It’s great. 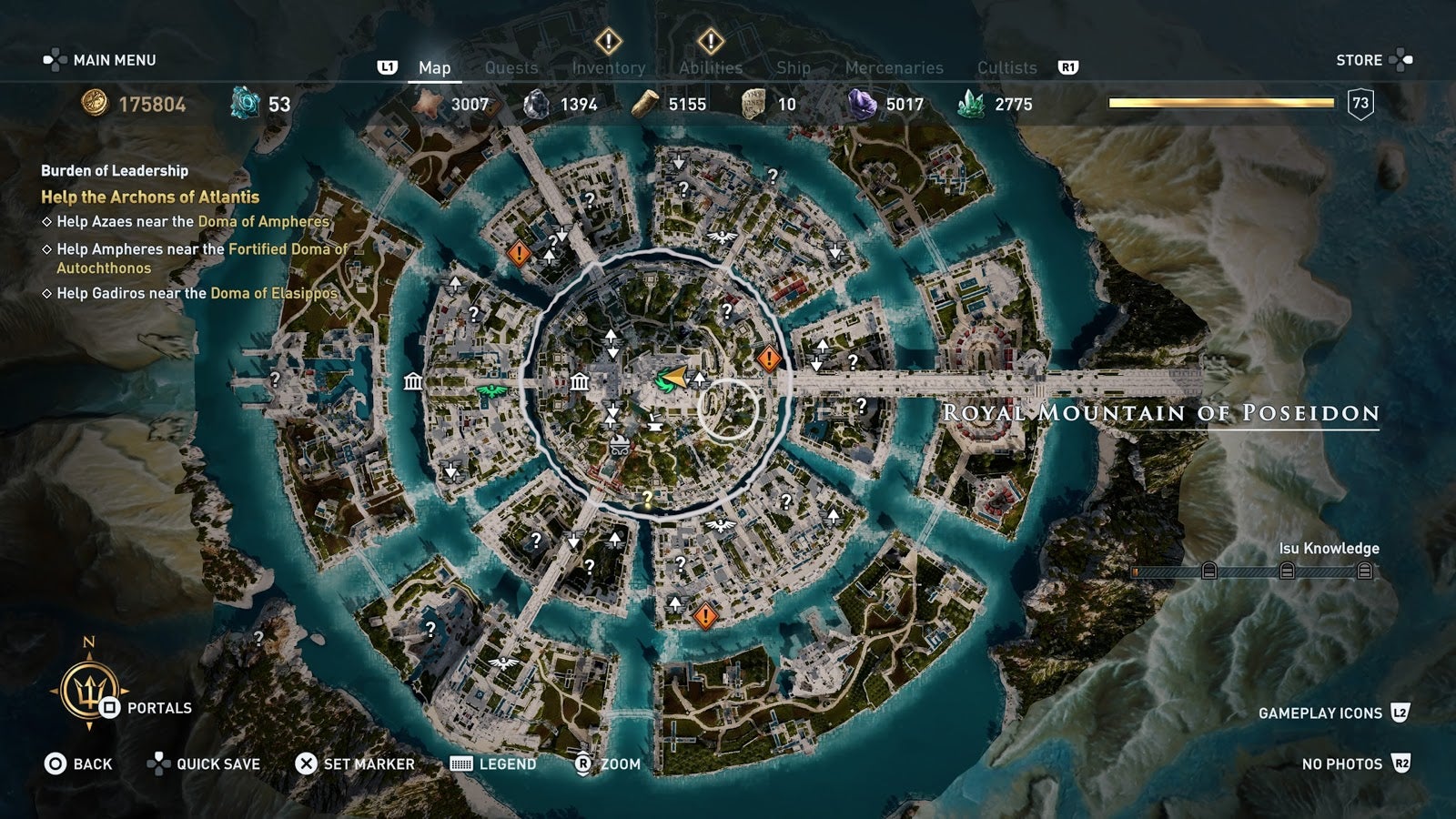 What’s newest to “Judgement” is a meter tracking the players’ attainment of Isu knowledge. Sometimes, filling the meter is as simple as finding items called Precursor Boxes. Other times, you fill the meter by learning actual Isu stuff. Atlantis is filled with high-tech slabs that you can activate to get text dumps about Isu referenced in other AC games, the history of Isu experiments on humans, and background information for some of the series crises to come.

About 10 hours into “Judgement,” my Isu knowledge meter was full. I’d climbed all the city’s towers, I’d gained all the available special powers, unlocked an amazing new set of legendary armour, wrapped up all the sidequests, and had my character meet up with Poseidon to render some judgement on Atlantis. All of that was a fun handful of nights of AC gameplay after my kids went to bed. Then came the DLC’s pair of codas.

All of the Fate three-parter is presented as some form of simulation orchestrated by an Isu named Aletheia. As opposed to the rest of Odyssey—and the rest of just about every other AC game—players are not meant to think of what happened in “Fate” as a historical character’s lived experiences. Rather, Aletheia explains to our main Odyssey protagonist that these trips to Elysium, Hades, and Atlantis are not real and instead are training to wield a special item called the Staff of Hermes, which makes its wielder immortal. That has put a cloud of confusion over these instalments. If Kassandra knows she’s in a simulation, why is she getting emotional about seeing people in Hades who died in the main game? When she’s going to Atlantis and seemingly hanging out with actual Isu, is she instead just meeting a simulation of them? If they’re just simulations (which they are), then why? Only at the end of “Judgement” does Aletheia clarify why so much of what happens in the expansion seems real to our playable character, and while the answers make sense, they come off as a contrivance. If that contrivance was necessary to somehow establish a playable Isu adventure, so be it, but it doesn’t make the framing of the “Fate” any less awkward. 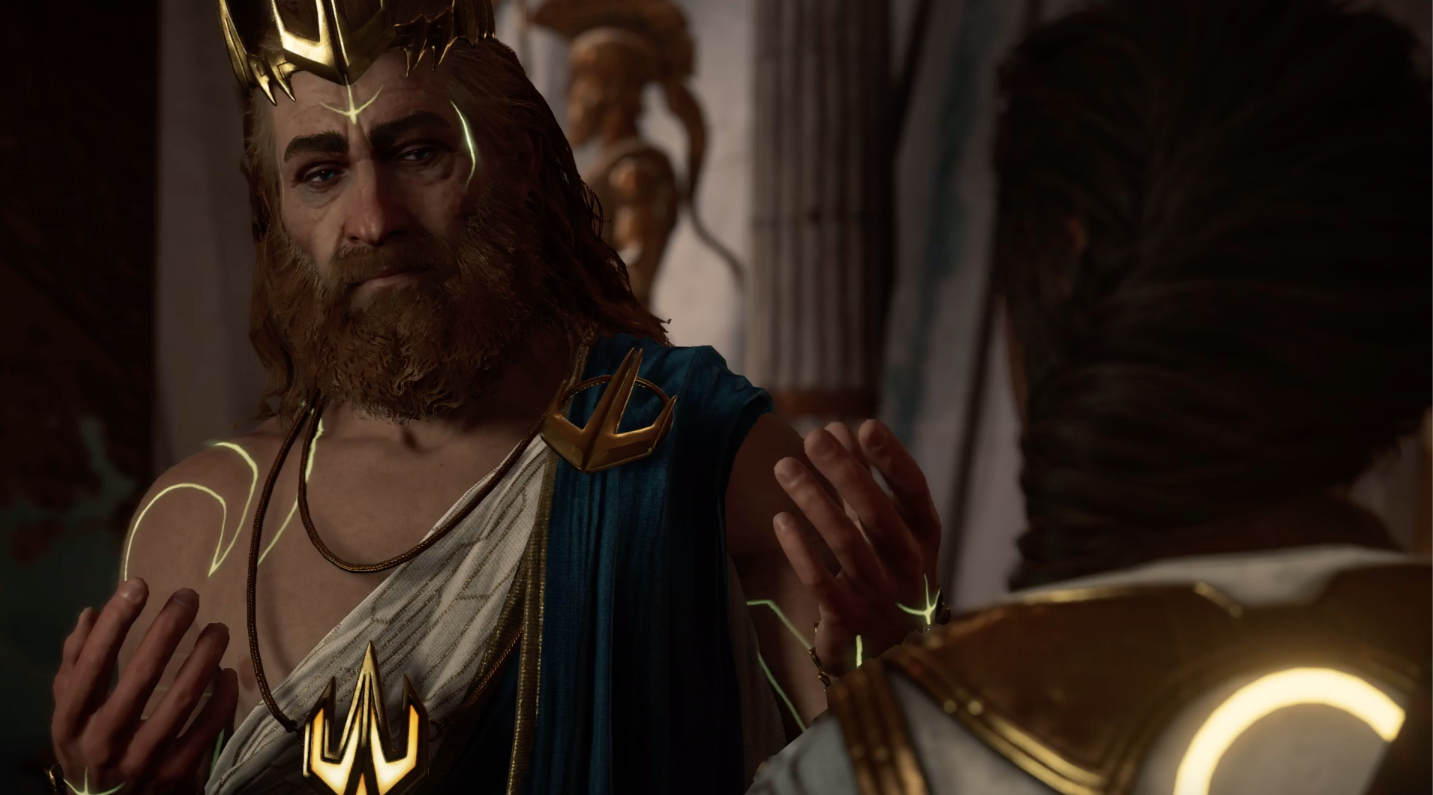 It’s Poseidon, who is more Isu than Greek god

That strange note near the end of “Judgement” is followed by another as the expansion zips back to the present day to bring us back to Layla Hassan, the modern Assassin-sympathising researcher, who has been using the Animus to see the lives of the protagonists of Origins and Odyssey. What happens then is a spoiler best left for people who care enough to reach it, but I’ll say that it was both unsatisfying and, worse, dull. Even the most classic Assassin’s Creed games used to end their modern-day sequences with cliffhangers, but I at least always wanted to know what would happen to Desmond Miles or Shaun Hastings next. Two games into her limited exploits, I am still not excited to see what happens to Hassan next. It’s getting slightly more interesting, but it’s begging for something richer in the next AC game.

Tune out those final moments and “Judgement” is a wonderful experience. It looks great while delving into the most obscure part of Assassin’s Creed lore and improving the game’s combat with an array of satisfying new moves. When I interviewed some of Odyssey’s lead creators in June, they said they consciously decided to focus on the series’ more hardcore side-lore in its expansions. While it’s debatable if this kind of stuff should really come primarily in paid DLC, almost as if it’s a hardcore fandom tax, it’s far better than ignoring it. I finished “Judgement” not terribly excited about Layla Hassan, but I’m eager to know more about the Isu then and now. And if you’re an AC player who thinks less Isu is more, that’s too bad, but at least there’s a 130-hour main Assassin’s Creed Odyssey game you can play instead. That main game’s still getting at least one more “Lost Tales of Greece” free expansion. Maybe it’ll end on a note that will be exciting for everyone. 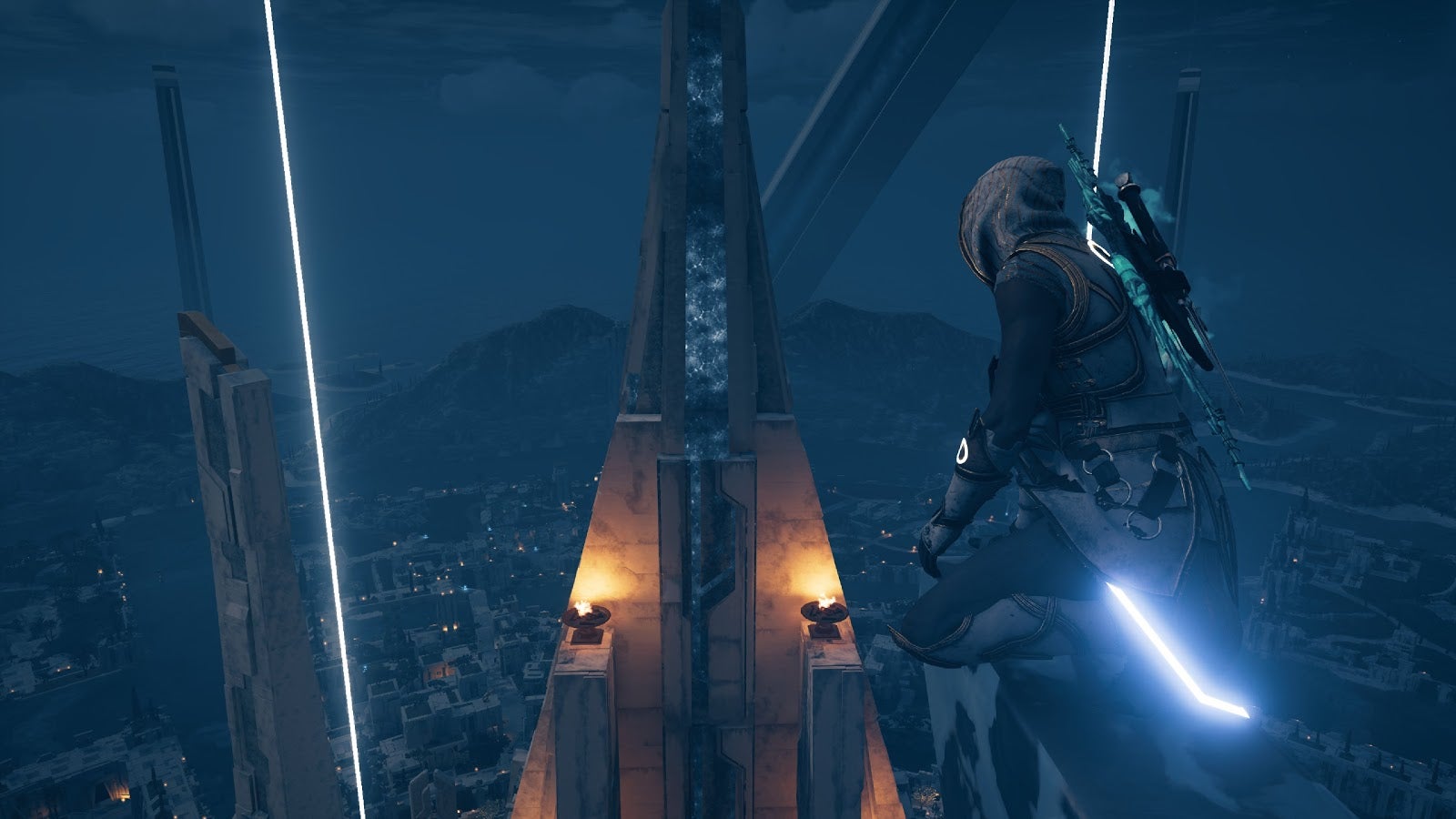