Okay, Seriously, Maybe VR Gaming Is About to Have Its Big Moment

I keep thinking about a video game I played in Los Angeles a month ago that’s what you’d get if the renowned covert ops Splinter Cell series required your character to always be in a kayak.

The game is called Phantom: Covert Ops, and it’s pretty cool. The catch is that it’s all in VR.

Please, don’t go away. Keep reading! I’ve even got an interview to share with you involving the guy overseeing games at Oculus.

Talking about VR gaming piques some people’s curiosity. Unfortunately, many others tend to tune out. VR gaming is conceptually cool, but it’s expensive, inconvenient and, to some, nauseating. It’s also something that’s hard to appreciate in trailers, and harder still in the written word. I’ve been writing about understandable gamer disinterest in VR since 2016, when I first heard the snores while covering pretty cool VR games.

Here I go again, because some of the coolest games I saw at the E3 gaming show in LA were in fact in VR. Yes, it’s taken me a month to tell our readers about these games, but such is the backhanded praise I’m afraid I always deliver to this scene within a scene.

First, there’s this Phantom game. You sit down, put on an Oculus headset and hold two Oculus Touch controllers in your hand. You’re on a river. It’s dark. You paddle toward some bad guy lair that can’t be accessed by air or land, hence the kayak.

A boat is coming. Quick! Paddle over to the reads and wait for it and its bright lights to pass you by.

Paddle some more. There’s a bad guy guard over yonder. Reach down to your side and pick up your virtual sniper rifle. Move it toward your eye. There he is in your crosshairs. Take the shot.

Reach a blockade. Paddle up and toss some C4 on it. Paddle back and blow it up.

Totally wacky premise. Totally fun game. Feels great in VR and is extremely comfortable to play, since you’re sitting down in real life and in the game and you’re moving at the speed of a paddled boat.

Then there’s Stormland, an open-world first-person action-adventure from the great Insomniac Games. That’s the mostly PlayStation-centric studio behind Ratchet & Clank and Spider-Man that has made a bunch of VR games not for PlayStation VR but for the Facebook-owned Oculus. In Stormland, you’re a robot. Shortly after I started playing, the game encouraged me to rip off one of my arms, which felt very weird to do in VR. Then I plugged in a new robot arm and started exploring an archipelago of islands. As I played, I upgraded my arm so I could shoot lasers, climb walls and even skate across the clouds. It all felt great.

But you know how it is with VR, right? You’re going to see some graphics that look way less impressive on your flat monitor or phone than they did in an Oculus headset, where they felt as if they wrapped all around my head.

There’s Lone Echo II, a game in which you’re a robot floating around in an abandoned space station while communicating with a captain named Olivia who is also floating around in there with you. This one didn’t grab me as much as the other two, but it still was neat to be floating around with another character, while also trying to figure out how to move through zero gravity.

Some VR games are gimmicky. Some are fun. There’s a wide range in a young field. I’m partial to PSVR’s Astrobot Rescue Mission on PS4 and the multiplatform Cosmic Trip. People love Beat Saber, others go on about the VR version of Resident Evil 7. I recently had a very good time playing a pre-release Iron Man VR game and a VR mode in No Man’s Sky. There’s good stuff out there, but it’s been relatively hard to access due to the expense of VR headsets. Plus, a good amount of it is still spread across various platforms.

At E3, after seeing these games, I chatted with Jason Rubin, who runs first-party gaming at Oculus. He co-founded Naughty Dog and famously looks the part of Uncharted’s Nathan Drake. We talked frankly about Oculus, or at least as frank as a person charged with selling Oculus is going to get. “We feel great,” he told me when I asked him how things were going. Then he declined to tell me if Oculus has sold a million of their main Oculus Rift headsets yet.

“You know there are people that are interested in purchasing [VR], but these things always move slowly,” he said. 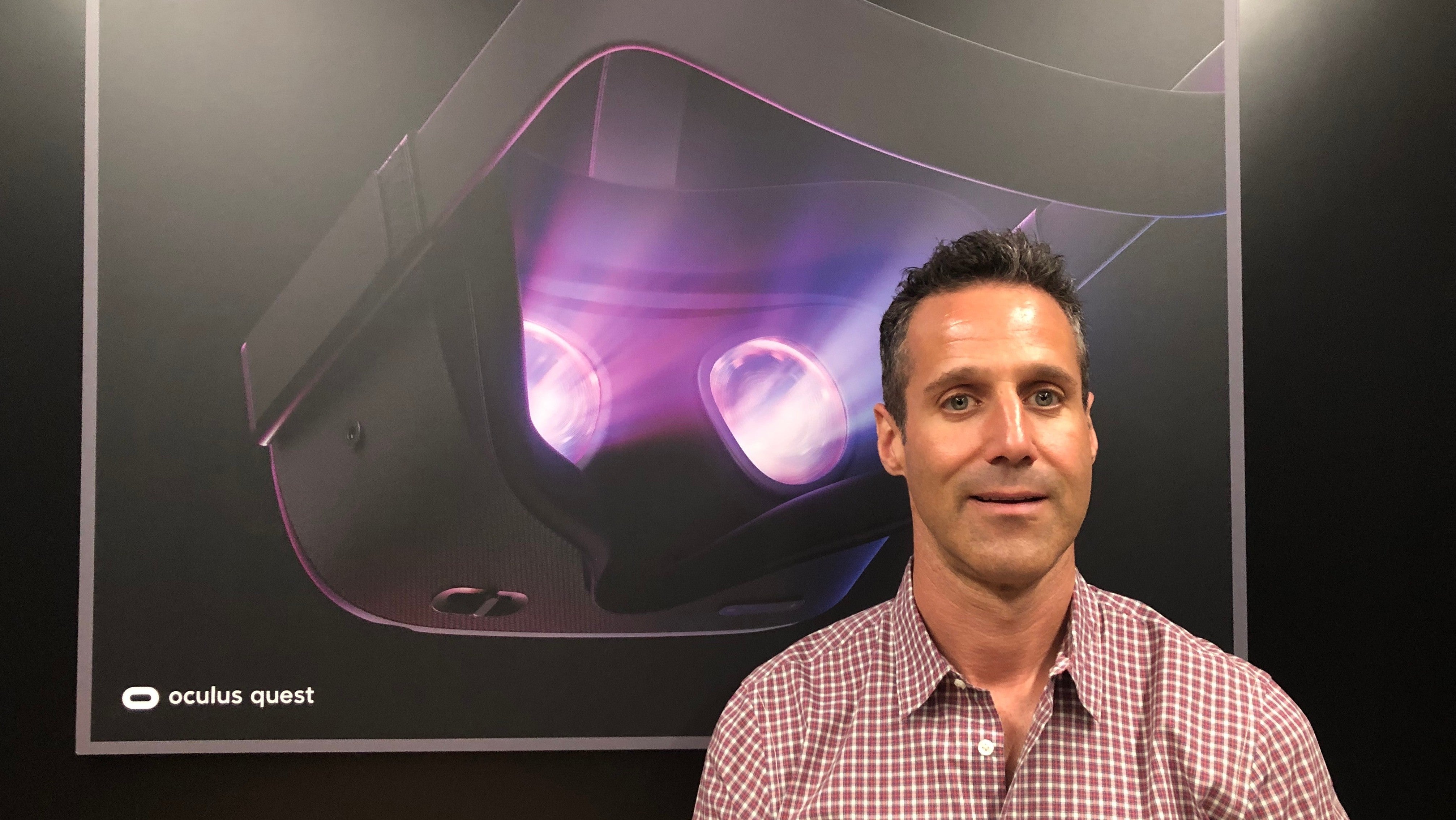 The issue for Oculus and for other companies pushing VR is that VR gaming just hasn’t been broadly appealing, though Rubin made a strong case in L.A. that Oculus may have finally figured it all out. The solution and the push is for a device called the Oculus Quest, which launched in the spring to rave reviews, including from us: “The Oculus Quest Is How Virtual Reality Should Work.” It’s a VR headset without wires, without sensors, without the need to be plugged into a PC or console, yet it can still run some impressive games. “Quest is mass market,” Rubin said, telling me it radically changes the VR landscape and has the potential to make VR gaming hot this holiday.

The catch? Well, for one, Quest costs at least £400, so VR gaming still isn’t cheap even if it no longer requires sensors or wires. The other? Two of the three games that wowed me at E3 don’t run on it. The kayak game does run on the Quest, but Stormland and Lone Echo II require the higher-end Oculus Rift. Rubin said that’s because those games were planned before the Quest was a thing. The newest Rift, which also costs £400 and doesn’t require sensors, needs to be plugged into a pretty good PC.

As I chatted with Rubin, he portrayed VR gaming as an inevitability, as well as a tech that wasn’t going away, and one that would work better and reach more people bit by bit. One reason why it’s not going away soon is that it’s backed by big money. Oculus is owned by Facebook, and, as Rubin told me, “Mark is a patient individual.”

The continued frenzy of indie developers to make VR games is another argument for the scene’s longevity. While Facebook funds a lot of VR game development, like Sony does for the PlayStation VR platform, indie developers also just seem genuinely interested in making this stuff. They’re more into it than corporate publishers, in fact, as we’ve seen EA, Activision and others make just token attempts. Even the more experimental Ubisoft, which has produced a slew of VR games in recent years, has shown signs of backing off, including by adding a non-VR mode to their ambitious Star Trek VR game.

Around VR, there are signs of stress. During that E3 week, some indie developers complained about being blocked from selling their games on the Quest’s curated store, something Rubin tried to address and clean up during an end-of-week twitter thread.

While talking to me, Rubin entertained a surprising crossover: the idea of Oculus games on Sony’s PlayStation 4-based PSVR platform, which has its own roster of exclusive games. “We’ve thought about it,” he said. “I would love to make a trade with Sony. You know they have great stuff that they funded, and we have great stuff we’ve funded.” Nothing’s confirmed yet, but it’s still a sign of where things are at that Oculus would even consider putting their games on another VR platform.

It struck me as I talked to Rubin that he’s got a checklist of formidable problems. Better headsets and better games will help, and he’s got to figure out how to get more people playing VR games. Oculus and VR developers overall also could use a breakthrough in how to show VR games off, which Rubin says Oculus is working on. VR games have looked best to spectators when they are shown in a so-called mixed reality format, which integrates a video feed of the person playing the game into the VR game they’re playing. It caught my eye when it was used three years ago to show off the VR construction game Fantastic Contraption.

“We’re pushing to try as best we can to enable mixed reality so that streamers and developers can share that video with people online,” Rubin told me, saying some upcoming changes that he didn’t want to detail yet would make it easier. An external camera will be required, but a green screen would not.

Then there’s sickness, which is still a thing. Numerous staffers at Kotaku can’t even play a VR game when I want to show it to them, because they quickly feel ill. They’re not alone. Rubin says that better lenses in VR headsets, the addition of wider fields of view and drops in latency thanks to more powerful gear will help ameliorate the problem, but he still likened VR gaming to riding a rollercoaster or setting sail. “Ultimately it’s still going to be a boat and there will be some people in some situations that are a little uncomfortable,” he said. (Ah, but what if the game was all about you being in a boat? And sniping bad guys. Right?)

VR gaming will crawl forward. The games I saw are still in development and will hopefully still dazzle in longer play sessions. Oculus is gearing up for a September showcase that will include the debut of a VR game from red-hot Respawn Entertainment (Apex Legends, Titanfall). Rubin thinks the Quest will have a big Christmas, too. It might. It could. VR gaming’s got a lot going for it, but I also won’t be surprised if, a few years from now, it’s still a struggle for gaming’s most awkward platform to catch on.