YouTuber and Pokemon card collector smpratte has the story (via CNET), as he claims to know both the buyer and seller personally. What appears to have happened, smpratte says, is that having sold the card for $60,000 last year to someone outside the US, the seller posted it domestically, after which the card was forwarded to a Global Shipping Program centre in New York City. 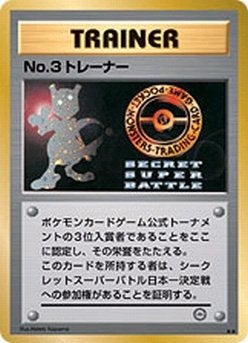 The card was signed for, valued at $50,000 for insurance purposes – the highest figure possible – and was supposed to then be sent on its way. However that’s where the card’s journey ends, as no further tracking was ever noted, and no trace of it has turned up since.

The card in question is a "Trainer No.3" (left), one of the rarest in existence, which was given out to third-place finishers at a “Super Secret Battle” in Japan in 1999. smpratte guesses that the card went missing at the New York GSP office when someone noted the insured value of the package, but there’s no proof of that; the video instead seems mostly geared towards warning whoever is in possession of it now that, thanks to the card’s rarity, there’s no way it can be sold without attracting the attention of people who know what it is and who legally owns it.

The buyer is now offering $1,000 for information that can help track down the card’s whereabouts.