The Division 2 Is Testing Some Much-Requested Features

There’s going to be a lot less to complain about regarding The Division 2 if a batch of features going live in a test build this week make it into the proper game later this month. Ubisoft’s impressive but contentious shooter appears to be getting torches (much requested!), badly needed buffs for gadget skills, and even matchmaking for its raid, though there’s a big catch to that last one.

The changes are all part of the Public Test Server build for the game’s Title Update 5, scheduled for a July release. Anyone who own Ubisoft’s cover-based shooter on PC could start accessing the new PTS yesterday, though a bug appears to have delayed some key content until today.

Different aspects of Title Update 5 are being tested in phases. Today, PTS players can test two new story missions that will be part of the update.

On Wednesday and Thursday, Ubisoft is letting them try the game’s notoriously difficult eight player raid on a new “discovery” difficulty setting that will allow for matchmaking. This is one of the bigger deals in the update.

When The Division 2’s raid launched in May, many players complained that the new multiplayer mission wouldn’t allow for matchmaking, despite a promise in marketing materials that “every activity” in the game would have it. Instead, players had to manually sync up with seven others, which Ubisoft developers said they felt was important to assembling groups that would work through the raid as an effective team. (Similar games, like Destiny 2, have taken the same approach.) The developers later said they would work on a compromise offering. It’s unclear if this is the entirety of it. Matchmaking support for an easier version of the raid will allow more players to see its content, but said “discovery” version of the raid won’t pay out the game’s top loot rewards. 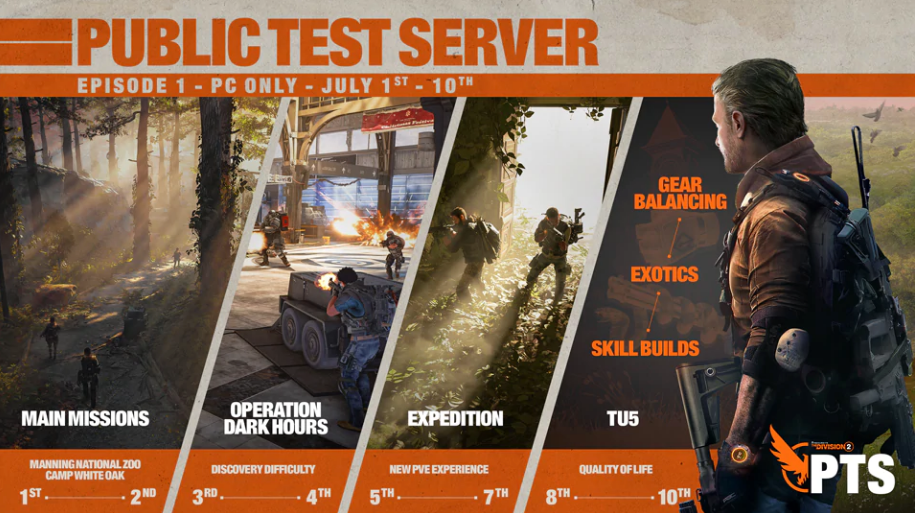 The PTS’ patch notes also describe a slew of buffs being made to the game’s turrets, drones and other equippable gadget-based skills. These were badly needed, as players striving for the most powerful character builds have all been running the same gun-centric loadouts. Some of these changes were demonstrated in the weekly State of the Game developer stream last week, with more detailed in new PTS patch notes yesterday. While the nature of the PTS means the buffs being tested may change before release in the main game, they should lead to dramatic increases in damage for gadget skills—five-fold in some cases.

Somewhere in the PTS, players will be able to find torch attachments for pistols. Believe it or not, this is something players have clamoured for. Parts of the game can get pretty dark.

As many problems as this Public Test Server might solve, it’s also introducing a new one. Later this week, from Friday through Sunday, the test build will feature the game’s new puzzle- and exploration-based Expeditions mode, giving testing players a big head start on what the game’s live content manager, Yannick Banchereau, recently told us will be a mysterious, puzzle-based experience. Letting PC test players have a crack at them all this week certainly seems like it’ll spoil some of that challenge. After all, the inclusion of coded messages in The Division 2’s pre-release beta led to those messages being cracked weeks before the game was fully released. In response to a player complaining about Expeditions being offered to PC PTS players, The Division 2’s creative director, Julian Gerighty replied: “Too late for this one - will consider for the next.”

Title Update 5, which includes the new story missions, the Expeditions and presumably the features or some variation of them being tested on the PTS, is expected to go live later in the month. It’ll all be free, though players who have paid for the game’s year-one pass will get a week’s head start, presumably shortly after the PTS ends.