After a period of stagnation, Valve has gone back to its well of Steam sale meta games—something users have enjoyed in the past, even though they’re ultimately just a means of incentivising people to spend more money. This time, though, Valve may have taken things too far with a game that’s caused widespread confusion. After 24 hours of uproar from players and developers, Valve has acknowledged its mistake and changed the game.

This year’s sale comes with a Steamwide minigame called the Steam Grand Prix. It’s racing-themed, and users are divided into five teams: Hare, Pig, Cockatiel, Tortoise, and Corgi. The goal is to gain points by completing special in-game Grand Prix quests (and spending money on games to increase your point maximum, of course) and use them to boost your team. Each day, random members of the top three teams receive the top game on their Steam wishlist for free.

“I just really don’t even know what to do with this event anymore.”

Sounds simple, right? It’s not. The gamified element of the sale is poorly explained and weirdly granular. First, you’ve got to increase your max points, in effect earning one sort of currency. Then you’ve got to earn points themselves—another, more literal sort of currency—up to your max. If you do this in the wrong order, you just can’t use all the points you’ve earned—you can only use as many as your max capacity allows. Finally, you spend those points on a boost for your team, the effectiveness of which is hilariously difficult to determine. Here’s Valve’s explanation: “Upon Boosting, the Nitro you’ve gained will help increase your team’s speed in the race. Coordinate timed boosts with your teammates and together you’ll increase your Team Boost level. 100 active Nitro will result in a 0.1x Boost to your team’s speed.”

There are also other twists, like the fact that your initial boost meter capacity varies based on previous purchases. Users have complained that capacity can apparently be harmed by prior refunds. There’s also a token system, and the whole Grand Prix is tied into Steam’s trading-card and badge-crafting systems as well, to add to the cherry tree forest already atop this needlessly complex sundae.

Steam users have made roughly one million memes about how confusing all of this is. Others have had longform breakdowns.

“No joke, day one I had 29k points somehow when I haven’t bought anything on Steam for a hot minute and have just been doing backlog games, but I got 29k points from Dead By Daylight achievements,” wrote one user on the Steam subreddit, attempting to understand what the heck is going on. “I had 29 nitro boosts or whatever, used 3 of them. Then I read that every $1 I spend would be 100 extra points for my boost cache, spent $126 on games expecting to see an increase of 12,600, nothing popped up within a few hours, thought maybe it’ll apply next day. Day 2 uhhhhhhhh 9 boost packs remaining and my point/cache limit is now 6099.... like I don’t even know how that happens. My cache is a fraction of what it was day one and about half of what I should have gotten from what I spent money on, plus seems like my nitro boost pack thingies just decided to delete most of themselves lol. I just really don’t even know what to do with this event anymore.”

Somehow, things are even worse for developers, who are seeing drastic decreases in their wishlist numbers because of Valve’s hyper-complicated game. Among many, many other things, the Grand Prix encourages people to dive under the hoods of their wishlists and do some tinkering before they join the event. “Be sure to update your Wishlist before you put the pedal to the metal, as the very best drivers will be awarded their Most Wished For games throughout the event,” reads a note at the top of the event page.

While some users have likely just taken this as a reminder to clean up clutter, Valve’s specific wording seems to have implied to others that a smaller wishlist will increase their likelihood of earning the specific games they want most, even though the fine print—which is harder to find—specifies that random people on the top three Grand Prix teams will get the single game on top of their wishlist, as chosen by them, each day. In other words, no amount of pruning will change the actual odds.

As a result of all this, many developers are sounding the alarms over their nosediving wishlist numbers.

“More people deleting our games from their wishlists than purchasing them from their wishlists, which as far as I can see has never happened in a sale before,” said Haunt The House and Detective Grimoire developer Tom Vian on Twitter. He also posted a graph from his Steam stats to back it up:

Other developers have posted similar graphs in droves. This does not bode well. If a game is on a user’s wishlist, they automatically get a message when it’s released and any time it goes on sale. Wishlists also factor into Steam store search results. This, according to Heat Signature developer and noted Steam studier Tom Francis, is “the most effective way I know of making your game sell better when it comes out.”

Yitz, developer of Nepenthe and To The Dark Tower, told Kotaku that being on Steam right now has become a net loss for some developers.

“Most indies (who are talking about it at least) are losing more money from Steam’s cut than they’re taking in from visibility,” he said in a Twitter DM. “I, and many other devs, are currently losing money from being hosted on Steam.”

“I, and many other devs, are currently losing money from being hosted on Steam.”

Today, in response to all this, Valve apologised.

“We designed something pretty complicated with a whole bunch of numbers and rules and recognise we should’ve been more clear,” the company said in a blog post. “We want to apologise for the confusion that this has caused, and also apologise for the broken mechanics that have led to an unbalanced event.”

Valve has also made some changes to the Grand Prix. Specifically, the company says it’s updated the event dashboard and manual to clarify the rules, and it’s also made some back-end, balance, and item changes to make it harder for a single team to brute force its way to victory through sheer team size.

Lastly, Valve clarified the whole wishlist thing (emphasis Valve’s): “If your team makes it to the podium and you are randomly chosen to win something off your Steam Wishlist, then we’ll grant you the top item. Just move your favourite item to the top of your wishlist and you should be good to go. There’s no need to remove other items from your wishlist—keep them there so you’ll be notified when those items release or go on sale.” 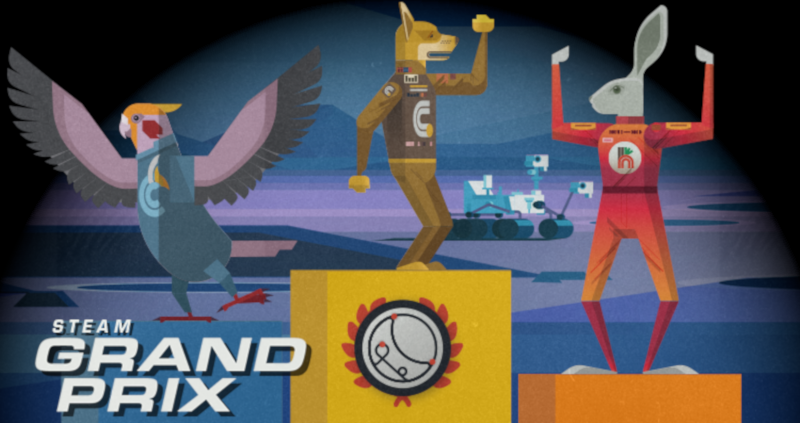 It remains to be seen whether or not these changes can salvage the event.

This is, thankfully, the first time anything like this has happened on this scale, and Yitz believes Valve will do a better job next time a Steam Sale rolls around. Still, he’s preparing an escape hatch, just in case.

“If you thought the 2018 ‘indiepocalypse’ was bad, if this holds up, we’re in for something a lot worse,” he said, pointing to indie-focused service Itch.io as a helpful alternative for smaller developers. “Should note that it’s very unlikely this will actually hold up, but it’s worth preparing an ‘emergency plan,’ for devs whose livelihoods depend on Steam sales.”