Samurai Shodown Is Slow And Deliberate in the Best Way Possible

Samurai Shodown, which arrives for PlayStation 4 and Xbox One tomorrow, is the series’ first original outing in eleven years. Although it’s unnumbered, this release represents the seventh mainline instalment of the storied fighting franchise, bringing its unique brand of methodical swordplay to a generation already overrun with sequels, reboots, and resurrections. My biggest question heading into my time with Samurai Shodown was whether or not it could stand apart in a crowded genre, and I’m happy to report that SNK hasn’t missed a beat.

Growing up, Samurai Shodown was my white whale. It was easy for me to jump into most fighting games and quickly figure out a few basic combos, but Samurai Shodown was different, even from a fellow SNK franchise like King of Fighters. I was routinely drawn to these cabinets throughout my childhood, enticed by the art style and samurai aesthetic, but after dropping a few tokens into the machine, I was lost. Why weren’t these attacks linking like I expected? Why was my health dropping so fast? Every time I tried my hand at Samurai Shodown, I would walk away disappointed, not at the game but at my own inability to grasp the mechanics on a fundamental level.

Now that time has passed and I don’t need to spend quarter after quarter getting my ass beat by more knowledgeable human opponents to learn a fighting game, Samurai Shodown isn’t a great mystery. Unlike its contemporaries, which focus on combos and mixups, this series is almost exclusively about spacing and predicting your opponent’s next move. The slow movement speed of the characters and the huge damage they can inflict with just a few well-placed attacks make every round a tense, deliberate affair, and it’s these key differences that continue to set the series apart even as fighting games have grown and expanded. In this way, Samurai Shodown feels more grounded compared to the rest of the genre, akin to the classic films of Akira Kurosawa rather than over-the-top anime or martial arts pictures from which most fighting games draw inspiration. 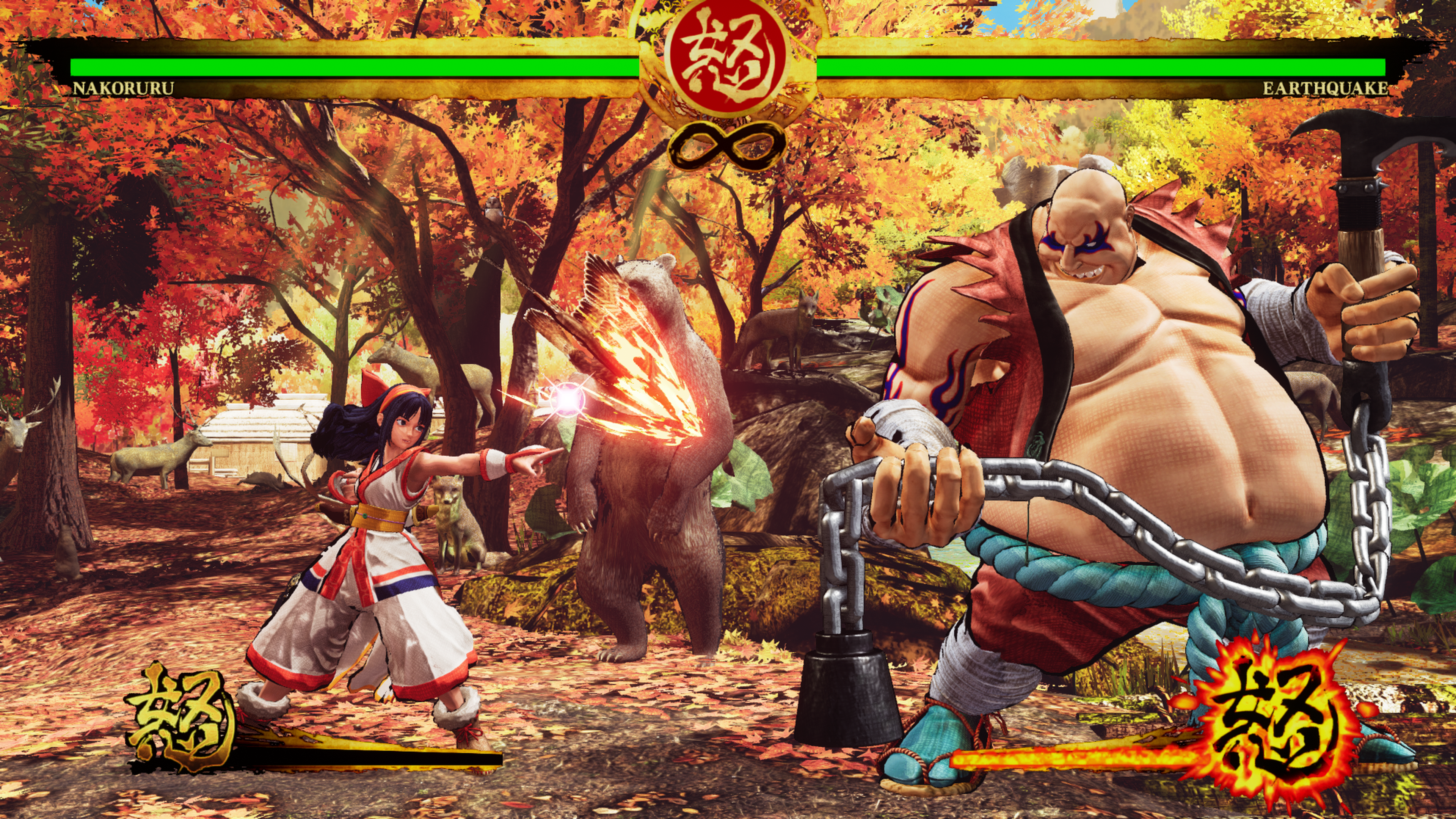 The newest Samurai Shodown revolves around four attack buttons: three weapon slashes of increasing potency—light, medium, heavy—and a kick. Light attacks are fast and low damage, while the heavy varieties are often accompanied by a dramatic swipe of the sword, making them intimidatingly unsafe but devastating if they connect with the opponent. From there, specific button combinations open up a character’s toolset. Pressing medium and heavy slash, for instance, results in a universal overhead that will hit crouching opponents, even if they’re blocking.

Where Samurai Shodown really shines is in its bevy of defensive techniques. Blocking just before an opponent’s attack hits results in a Just Defense, which ignores damage and can be transitioned into a space-creating Stance Break. Players can also avoid attacks altogether with Dodge, a move that, as the name suggests, dodges all attacks and throws during a short window. Then there are Counters, which deflect an opponent’s attack and disarm them; without a weapon, most characters can only use a set of much weaker physical attacks, although barehanded players do have the opportunity to perform a Blade Catch, which will disarm their opponent. As with most everything in fighting games, timing on these techniques is crucial, and any misstep will open players up to a world of hurt from a smart opponent.

The last component of all battles in Samurai Shodown is Rage. Over the course of a match, meters below both characters will fill as they get hit and perform techniques like Just Defense. Once the Rage meter is full, that character’s damage is increased, and certain attacks receive enhancements—mostly in the form of extra hits. Rage also grants access to Weapon Flipping Techniques, or supers that disarm the opponent if they land. Characters remain enraged for a set period of time that’s unique to each fighter, but Rage ends immediately with a successful Weapon Flipping Technique. Finally, players can use their Rage meter for a Rage Explosion, which further increases damage and allows the use of Issen, a super super that results in a dramatic animation and doles out tremendous pain on an unsuspecting opponent. These aspects of Samurai Shodown combine to create an experience that feels wildly different than any other fighting game on the market. Sure, you’re going to find spacing and footsies all over Street Fighter, Guilty Gear, and Tekken, but Samurai Shodown cranks those fundamental skills to the max. Combos are short but damage is ridiculously high, and those numbers only climb upwards when players manage to anticipate an opponent’s next action and counter-hit appropriately. The meticulous dance that results reminds me, oddly enough, of Divekick, the humorous, one-touch-kill fighting game developed by former competitor and tournament organiser Adam “Keits” Heart, who most recently worked on the second and third seasons of Microsoft’s Killer Instinct reboot at Iron Galaxy Studios. Just like in Divekick, more time is spent establishing control of the battlefield in Samurai Shodown than on landing attacks—but when those attacks do land, look out, because whoever is on the receiving end of the katana is in for a world of hurt.

While Samurai Shodown is sure to appeal to dedicated fighting game players, it might not find fertile ground with less zealous fans. The game only includes a couple of minimal side modes to break up the monotony of online and offline versus matches, including a standard fight-cutscene-fight story mode and a ghost-developing Dojo mode (the latter of which wasn’t yet available at the time of writing). The tutorial also leaves a lot to be desired; it teaches the basics, sure, but lacks a real demonstration as to when and where Samurai Shodown’s complicated techniques are best utilised. The inclusion of a trial mode to help newcomers learn a few basic combos and strategies would have gone a long way, but as it stands, I don’t see Samurai Shodown converting anyone who doesn’t already have at least a moderate interest in competitive fighting games.

As I’ve grown older and my hands have turned from supple instruments of death into gnarled claws incapable of marathon practice sessions, my opinion on what makes for a satisfying fighting game has evolved. Where before I was enthralled by long combos and intricate mixups, now all I want is a collection of simple-yet-deep mechanics that allow me to do cool shit without as much wear and tear on my digits. Samurai Shodown scratches that itch and then some by bringing the franchise’s unique rhythm to the modern age, with an unshakeable weight that favours getting in your opponent’s head with a smart read over pulling off 100-hit combos. Samurai Shodown can be exhausting, even frustrating at times—seeing your health melt away with just one or two attacks for the first time is deeply demoralising—but it’s a truly one-of-a-kind experience.

Ian Walker loves fighting games and loves writing about them even more. You can find him on Twitter at @iantothemax.