The Classic JRPG About Two Scientists Saving The World

A mix of The Legend of Zelda and the works of Hayao Miyazaki, Crystalis was an incredible action RPG for the NES whose surprisingly complex story helped elevate it above many of its peers. It’s also one of the games I most fondly recall from my childhood, so re-playing it on the SNK 40th Anniversary Collection brought back lots of good memories. 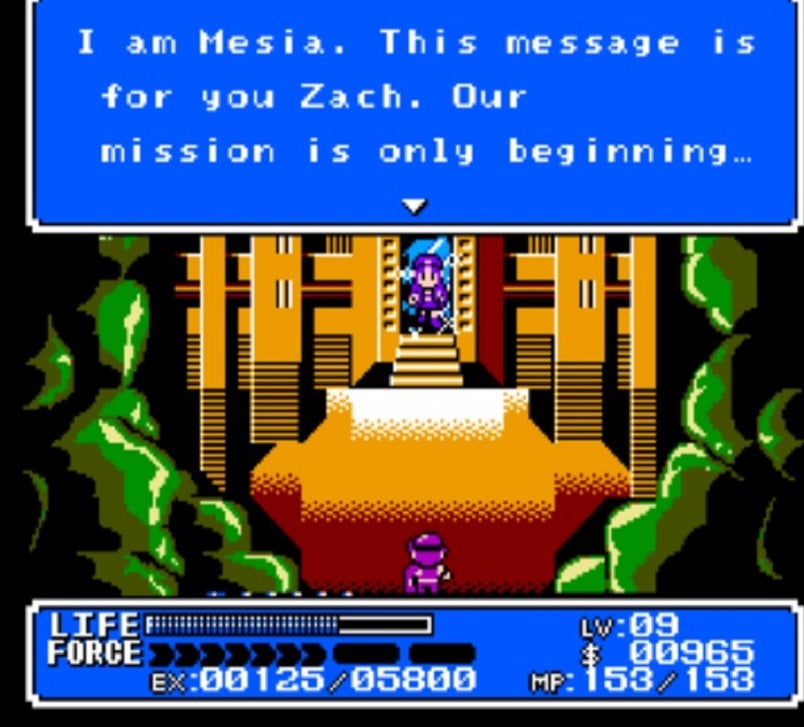 Crystalis is probably one of the most brightly coloured post-apocalyptic games ever made. The sprites teem with a vibrancy reflective of a society that has tried to rebuild after destroying itself in a great nuclear war. Your main character, Simea, is woken from a cryogenic sleep to fight against a brewing evil: the Draygonian Empire.

I love that the main character is a scientist who harnesses the elemental powers to fight against superstition and war. He travels the world to try and protect its people against Draygon, the emperor who wants to use the powers of a superweaponised tower to subjugate everyone. There’s an eclectic cast of NPCs you meet along the way that range from eccentric to downright selfish, and are memorable for their honesty. “Wise men… who cares. Let’s party!” one indifferent NPC suggests despite the calamity around them. While another annoyed NPC barks after you wake him: “A person like you should be eaten by zombies.” 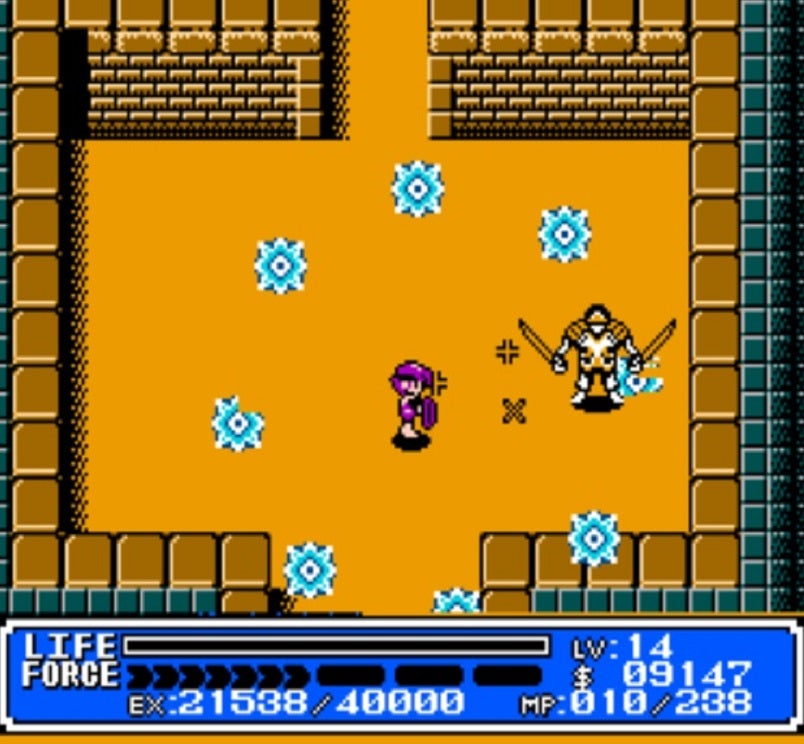 The gameplay is an evolution of the original Zelda, especially when it comes to the movement of the main hero. Simea can move in all eight directions and he’s also faster and more agile than Link was in the original Zelda. Equipping the rabbit boots lets Simea jump all over and a suite of spells adds a new dimension of complexity to the combat. Simea has a max of sixteen levels he can gain, but there are enemies that can’t be hurt until you reach a minimum level threshold. This threw me off when I played it as a kid and couldn’t defeat one of the the Draygonian Empire’s“Finest Four,” Mado, because I wasn’t at the minimum level required to damage him. “Just level up your characters,” the friend I borrowed Crystalis from informed me.

Simea can wield four unique swords that can be powered up based on the element from which they derive their power. Different enemies are vulnerable to different elemental powers, which is a concept that’s cool in theory. Unfortunately, it’s a bit cumbersome in practice because it forces you to switch into the menu each time you need to swap the weapons to beat an enemy that is impervious to the elemental sword you’re currently carrying. Still, the combination of spells, attacks, jumping, and even basic platforming made the action feel fast paced and exhilarating. Simea could use paralysis on a foe and go in for an attack, or unleash a level 3 lightning attack from the thunder sword to wipe out most enemies on screen.

Going hand in hand with the combat is some of the best music on the Nintendo. The overworld theme is one of my favorites and I’d argue it’s even better than the Zelda overworld theme.

Tower In The Sky 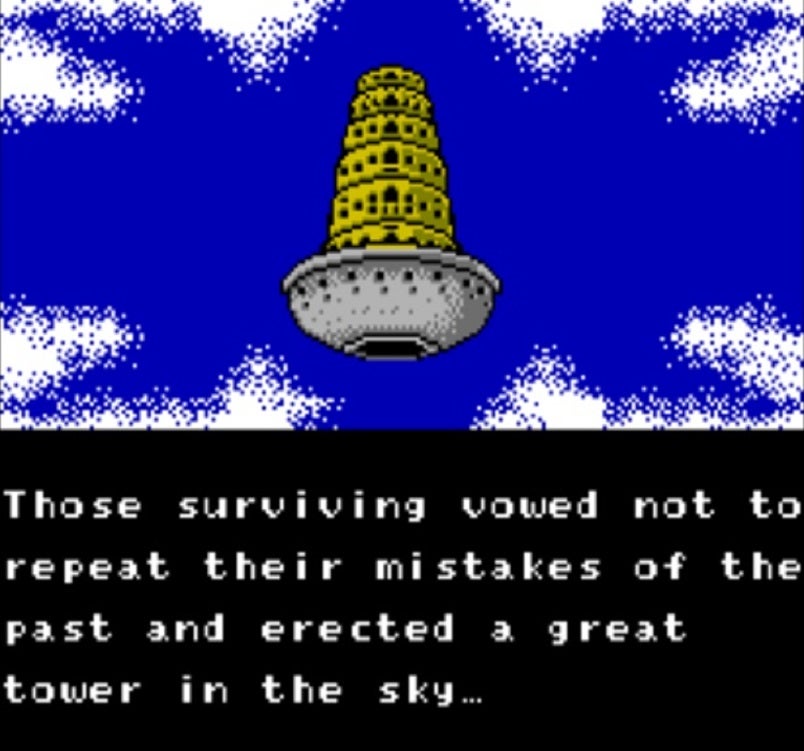 Crystalis draws thematic influence from the works of Hayao Miyazaki, especially Laputa: Castle in the Sky and Nausicaa of the Valley of the Wind. The giant insect boss in the Poison Forest looks similar to the Ohmu in Nausicaa, and of course the big tower at the heart of Crystalis is reminiscent of Laputa. But the story diverges into a darker direction, as signified by the original Japanese title, God Slayer.

Leaf is your standard JRPG opening town, providing the hero with a sword, money, and initial objectives. But further into the game, you learn that everyone there has been taken prisoner by the Draygonian Empire. Once you track the townspeople down, they’ve been enslaved to mine for a special metal. It was a cruel shock to see them locked up and soldiers making comments like, “Are those worthless villagers working well?” and “of course it’s difficult to complain when you’re not allowed… We must make them work harder.” The ironic part is that even after Simea rescues them, some of the NPCs are cheeky, stating, “So you saved us, big deal.” 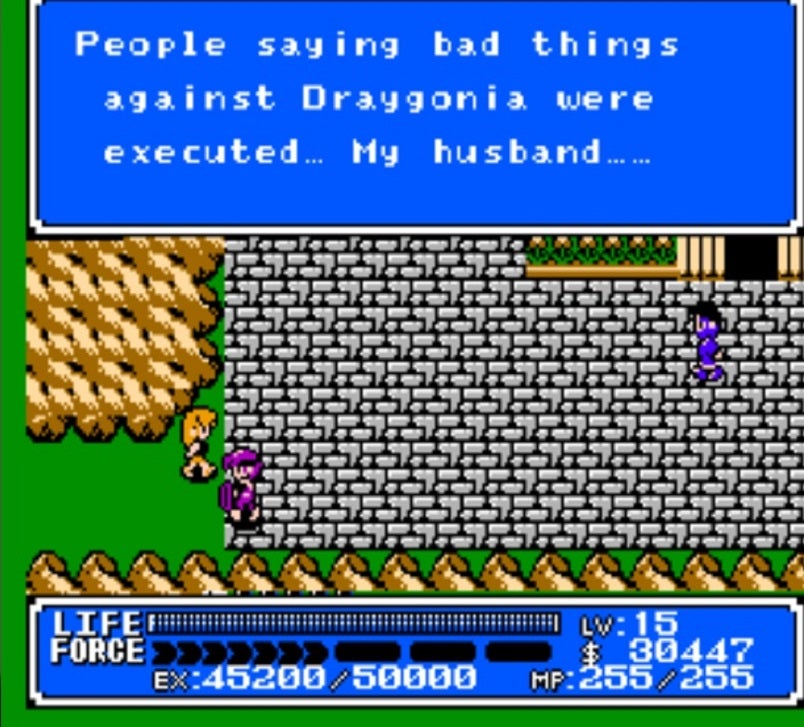 Later on, you find the central resistance village, Shyron, that is training people to fight against the Draygonian Empire. They’re led by the four wise sages, Zebu, Tornel, Asina, and Kensu. But while Simea is away, the Draygonian army attacks using the special armor built from the metal the people of Leaf had mined. Simea rushes back to town, only to see almost everyone is dead, including Stom, who was the pupil of one of the wisemen. As Stom dies, he tells you, “Everyone killed… watch out for Mado… He is more treacherous than the other three.”

There’s a touching moment later where you can transform into Stom and meet his bunny friend, Deo. Deo mistakes the main character for his old friend. When Mesia informs the bunny of Stom’s fate, he gets outraged and yells, “That’s a lie! He couldn’t be dead.” But he comes to terms with it and demands rabbit vengeance.

Little story touches like that made me feel real anger at the Draygonian Empire. I beat Mado in my first encounter, but it’s the second encounter that thwarted me as a kid thanks to the level limitation I mentioned earlier. It was only many years later when I was able to beat Mado properly. I felt so much satisfaction that I was finally able to fulfill the bunny’s request for vengeance. 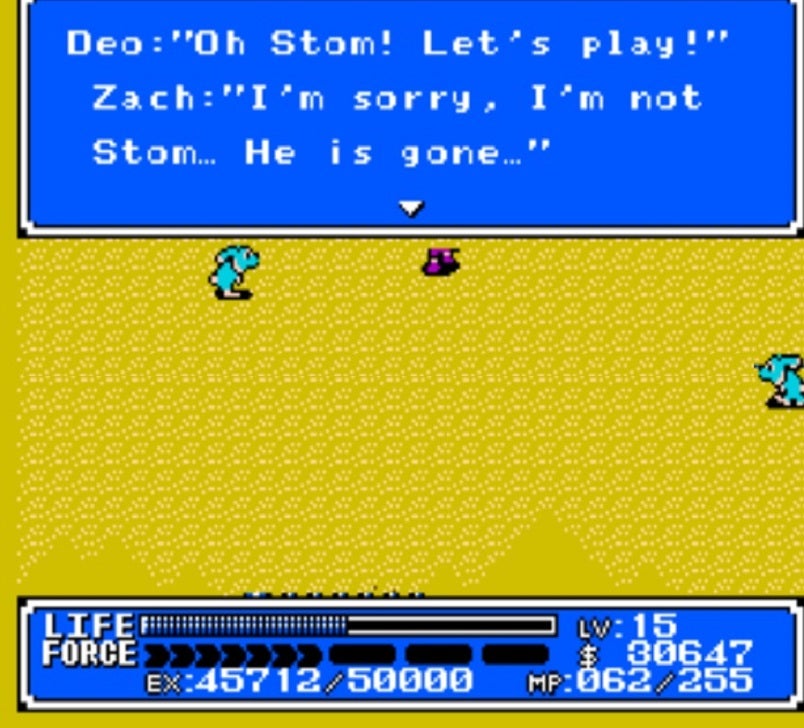 There’s so many other memorable moments in Crystalis, like tracking down the real queen in the water kingdom of Portoa who’s masquerading as a fortune teller; finding a wounded dolphin, healing him, then riding him in the Angry Sea; and finally defeating the Finest Four. The telepathy spell acts almost like a codec, where you can chat with four of the characters from the game, get story hints, and even irritated replies brushing you off. With the teleport spell, you could return to older towns and NPCs would update their dialogue based on actions that had taken place during your adventure. My favorite spell of all allowed Simea to fly and made platforming in levels much easier since you could just soar past the pits with moving blocks.

Even after the defeat of the Draygonian Empire, Simea and his partner, Messia, have to climb the Flying Tower. There you learn the truth about Crystalis. The hero, along with his partner, Messina, are arbiters acting as a judge on humanity: “You both were part of a team of scientists who created this tower. As the most critical link, you were preserved to witness our future race; to judge if there’s hope for humanity... When the tower began operating, your life systems were engaged and you both were awakened.” As for Azteca, the leader of the four sages, “He was an android created by us, and programmed to lead the people in a positive direction. We can only hope will succeed. We used all of our resources to create him. If he fails then it will be up to you to decide their fate.” 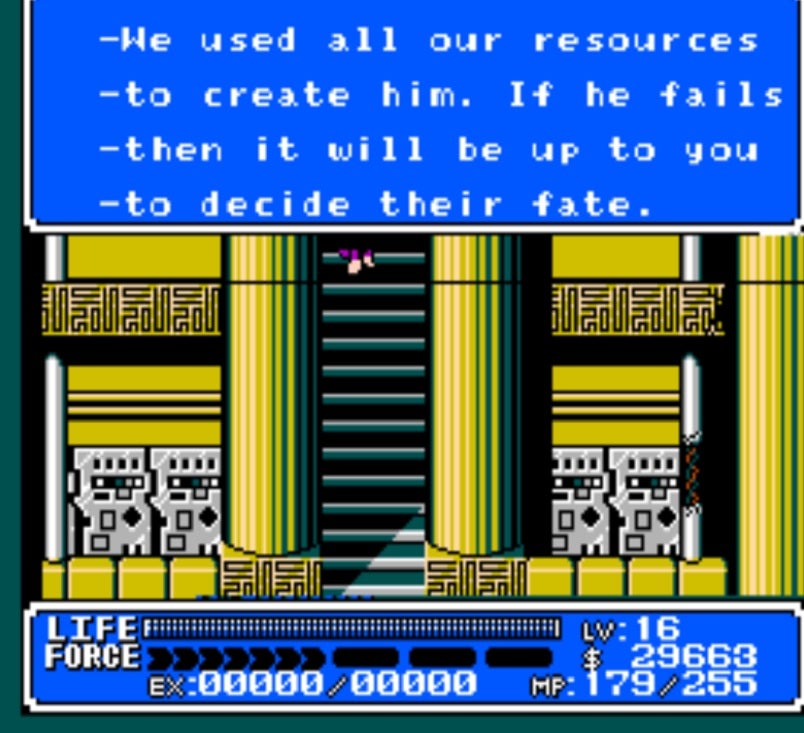 Unfortunately, as evidenced by the rise of the Draygonian Empire, Azteca failed, and death and destruction are present almost every step of their journey

In the end, the DYNA system controlling the Tower has to be stopped since it has the power to destroy humanity. It’s not a difficult fight by any means with the Crystalis equipped. The ultimate judgment, which leads to the destruction of the air castle, is an unfortunate indictment of humanity. People can’t be trusted with this kind of power. Even their artificially supplied guidance through the use of an android was futile. As long as the tower exists, more people will rise up to try to exploit its power for their gain. The two scientists work together to destroy their weapon and rescue humanity again. 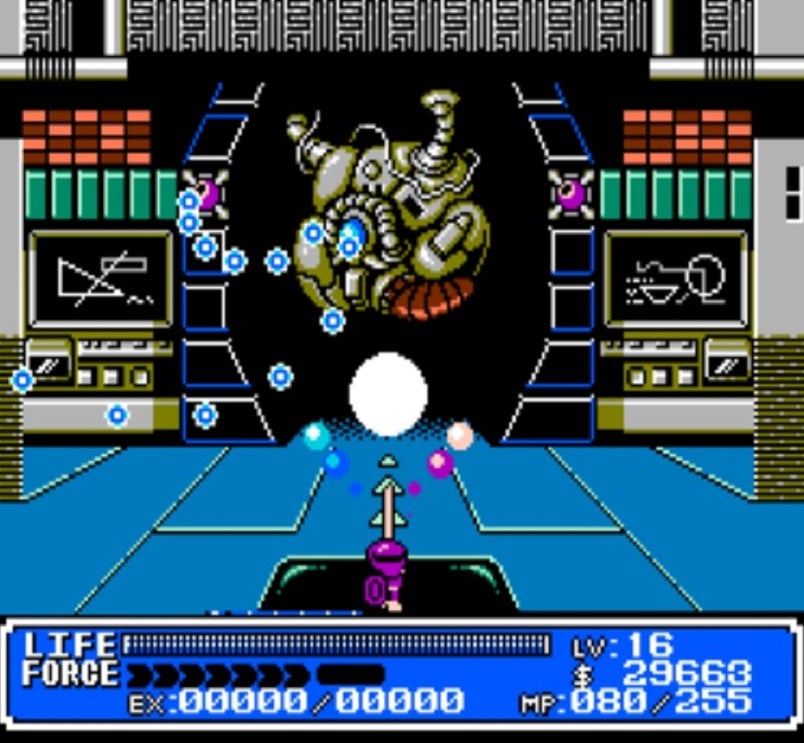 Crystalis has flaws, but makes up for it with bold strides in its narrative and gameplay. It’s not so much about slaying gods, though, as it is dealing with humanity and its evils. The android they created helped build the sword needed to destroy the tower, and knowledge, together with some fancy swordplay, paved the way to salvation. At least, that’s the hope...