Fortnite’s latest Creative mode, Prop Hunt, pits two teams of players against each other. One team disguises themselves as objects around the level, and the other team has to discover and eliminate them. It’s a little basic, but it’s fun.

Originating in the sandbox physics game Garry’s Mod, and having shown up in other games like Call of Duty, Prop Hunt is a comical twist on first-person shooting that fits well with Fortnite’s atmosphere. This version was made by Fortnite player StrayKite. I found it easiest to access via the Playground hub with the match set to “fill;” when my colleague Heather Alexandra accessed it via the Creative hub, we struggled a bit to make the match fill with other players.

Up to 16 players can join a match. One team is the hunters, who are armed with limited ammo and some weapons, including a Boom Bow and Boogie Bomb. The other team has a gun called a Prop-o-Matic that lets them take the form of objects in the level, like flowers, boxes, cars, statues, or balloons.. The disguised team gets points by collecting coins floating around the level. The hunter team gets points for discovering and killing the props. The two teams switch places, and whichever team has the most points wins.

Prop Hunt’s level is small, but there are a lot of places to hide. There’s a garden full of plastic flamingos, bushes, and statues, a house full of balloons and boxes, and a multi-level garage full of paint cans, crates, and pieces of art. Props can whistle to “taunt” the hunters, and every 15 seconds a ping sounds, letting hunters know roughly where the props are.

As a prop, it was more nerve-wracking than I would have expected to watch a hunter rush past me, firing at all the objects near me but somehow missing me. As a hunter, it’s hilarious to find myself chasing a skittering apple, or making a car dance with a Boogie Bomb. Prop Hunt is different than other Fortnite modes, taking the focus off aiming skill and eliminations and putting it on knowing the level and being patient. 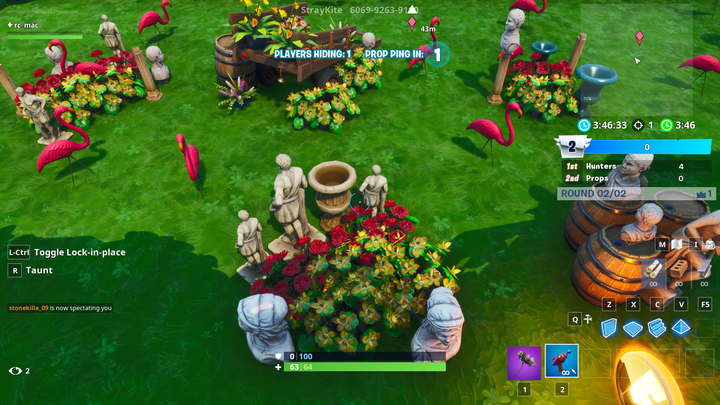 The mode can feel frustrating and limited, too. As a hunter, I sometimes found my best strategy was methodically shooting every object in an area until one registered damage, indicating a player. I also threw my Boogie Bombs as a test fairly often, which felt a little bit like taking the easy way out. As a prop, the need to collect coins felt like an afterthought. It kept me from just finding a good disguise and staying hidden, which can be tense but also a little boring, but collecting coins didn’t feel like something I had to actively force myself to do rather than a natural part of the round.

Combined with some weird tech wobbles—bizarrely, I took damage when I hit things with my pickaxe, as well as when my teammates shot me—the mode definitely feels fan-made, but none of that got in the way of my enjoyment too much. Prop Hunt is silly and not too taxing, a nice change of pace from the usual Fortnite grind. You can access it via the Creative or Playground hubs or by using Creative code 6069-9263-9110.