Earlier this month, Ubisoft released a free new Story Creator mode for players of Assassin’s Creed Odyssey. It’s a simple tool that lets you stitch together your own original quests in Odyssey using a limited set of options and assets. Yet even in its rudimentary state, you can still add experience and monetary rewards to your quests. Which is why the story creator missions I’m seeing in my game are full of farming quests that boosted me a dozen levels in a matter of minutes.

It works like this: Once you enable Story Creator content in Odyssey’s pause menu player-created stories will appear on your map as dark blue quest markers. Go to one, and you’ll find a portal leading to the story in question, with a quick summary that shows you what to expect. 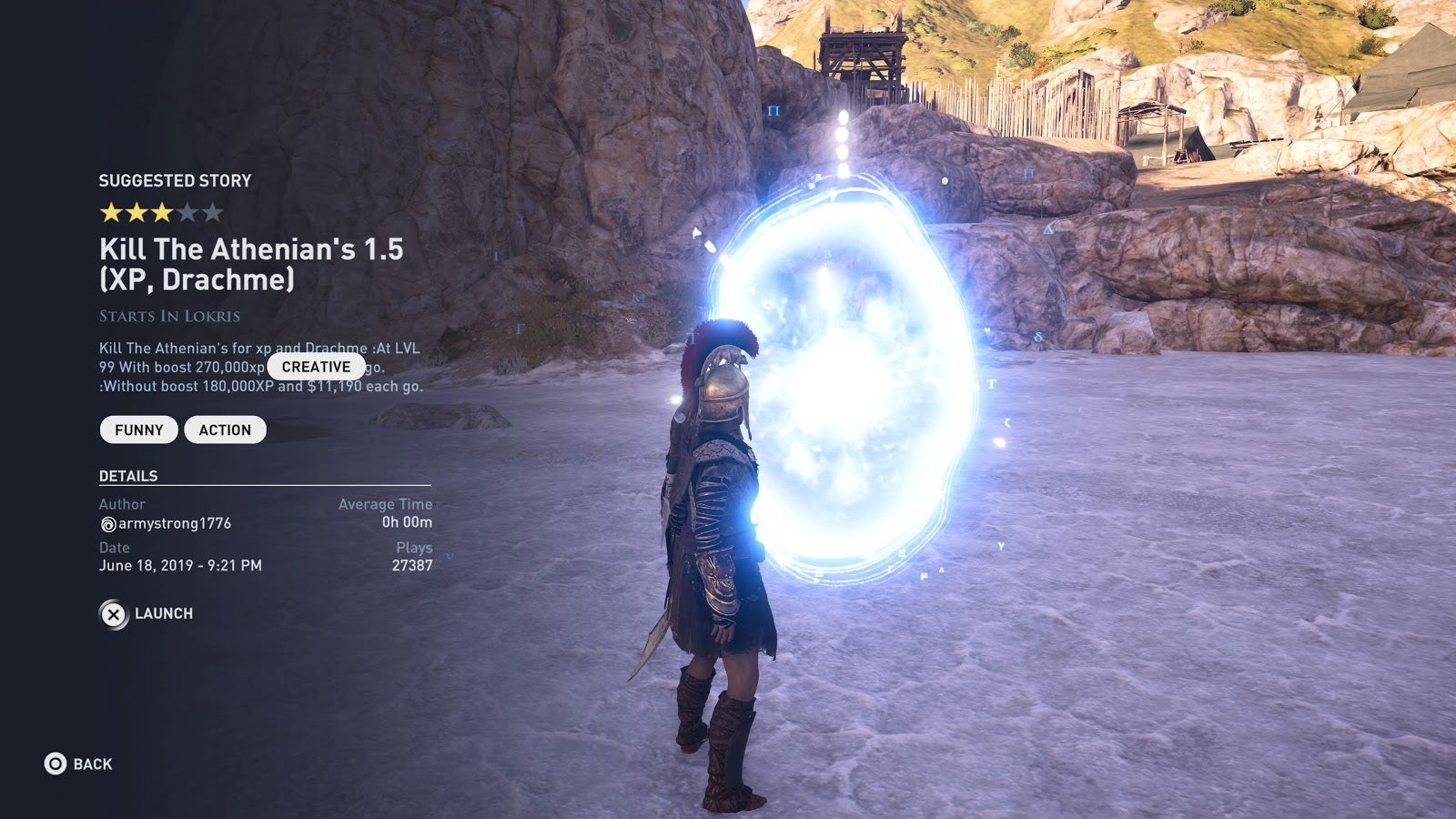 As you can see, this quest is pretty shameless, leaving nothing to the imagination. Version 1.5 of “Kill the Athenian’s” [sic] isn’t interested in pussyfootin’ around. That average playtime of zero hours, zero minutes? It’s not an exaggeration. As far as I can tell, it’s a quest designed to spawn you right in front of a group of friendly Spartan soldiers, who will then immediately kill a single Athenian before you can move a muscle. Quest complete, collect your drachmae and experience.

Want to power-level? Hold triangle on your PlayStation 4 controller, and immediately start the mission again.

As of this morning, there were loads of quests like this. On the island of Kephallonia, where Odyssey’s quest begins, there were three portals at the base of the first fast-travel point I unlocked, each of which led to a different brief farming mission so I could boost my stats before even starting the game proper. 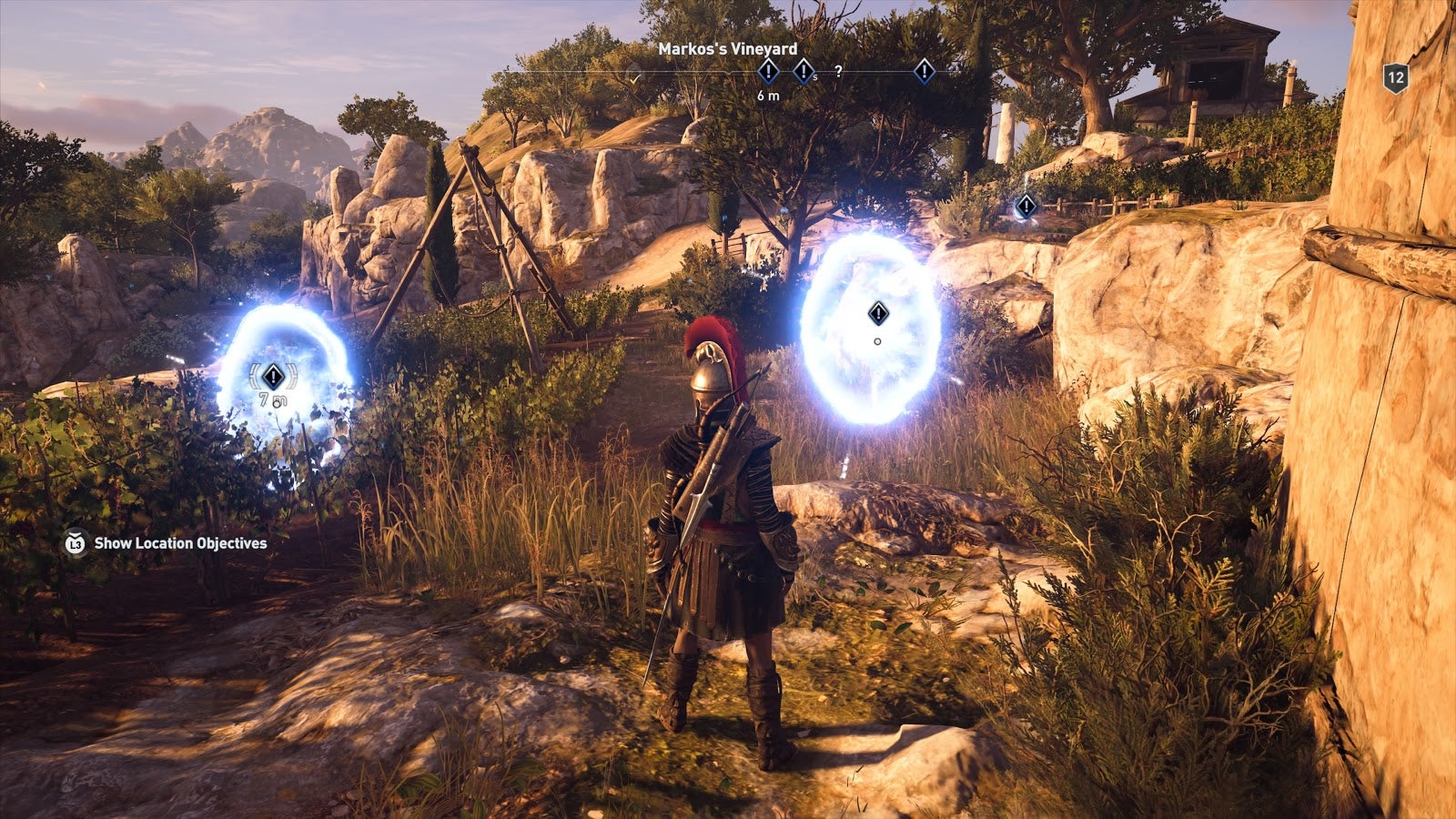 Granted, these aren’t the only sort of Story Creator quests you’ll find. There’s one called “The Tragedy of Darth Plagueis,” and I am looking forward to finding out how it interprets that story.

Levelling exploits are an ironic wrinkle when it comes to Odyssey, a game that launched with £70 worth of microtransactions that included “time savers” that provided XP and money boosts along with bundles of in-game crafting materials, all available a la carte. You can still buy these things and more for real money via Odyssey’s in-game store, which makes me think that Ubisoft might update the Story Creator tool to close this loophole. Kotaku reached out to Ubisoft for comment but has yet to receive a reply.

In fact, when I checked back on these quests just before filing this story, most of them were gone. The only Story Creator mission I found in the Lokris region of the map, where I found the previous Athenian-killing one, is a fun-sounding one where all five in-game armies duke it out in the region’s salt flats, with no farming implied.

There’s not much in the way of guidance from Ubisoft as to what will be permitted and what will be removed, and the 159-page manual that you can read from inside the Story Creator site only teaches you how the Creator works.

The response from Odyssey players has ranged from unsurprised to wry interest, since a cardinal rule of video games seems to be the immediate exploitation of whatever tools you give your players. It also doesn’t hurt that Odyssey is a staggeringly big game, and the road to levelling exploits is paved with user-created content.