Cadence of Hyrule: the Kotaku Review

Cadence of Hyrule feels like a chip dunked into a milkshake. There are two distinct flavours at play – the deep exploration adventure of a Zelda game with the bouncy pace of a rhythm game – and they mix together into something greater than the initial pitch. In combining two addictive yet contrasting gameplay styles, Cadence of Hyrule crafts a brief and brilliant flash of adventure.

Cadence of Hyrule is a mashup between Brace Yourself Games’ 2015 indie hit Crypt of the Necrodancer and the beloved Legend of Zelda series. It grabs the core gameplay of the former – action combat where movements need to happen in beat to the music – with the wider world experience of the latter. Success comes from how it marries these two experiences. Crypt of the Necrodancer is a rogue-lite experience, a game that features procedurally generated worlds and resets progress if the player dies. The Legend of Zelda offers persistent worlds to explore and dungeons to solve puzzles in. Cadence of Hyrule incorporates both of these things with some twists. The end result is challenging but also surprisingly accessible.

Back of the Box Quote: "Ocarina of Rhyme was taken.."
Type of Game: Bokoblin Dance Party
Liked: Fantastic music, expansive overworld to explore, playable Zelda, and deliciously fun dungeons.
Disliked: Can sometimes be hard to know where to go next, short length
Developer: Brace Yourself Games
Platforms: Nintendo Switch
Release Date: June 13
Played: Eased through my first playthrough in about 5 hours. Eager to try another.

The setup is familiar Zelda fare. In the distant Kingdom of Hyrule, an evil wizard named Octavo has placed the king into a magic sleep. Link and Zelda faced him only to similarly be placed under his spell. Crypt of the Necrodancer’s protagonist, Cadence, is drawn into the realm and awakens one of the two heroes. Players can choose between Link and Zelda to play as on an adventure to defeat Octavo’s four chief minions and, eventually, the wizard himself. (It’s possible to unlock the other hero and Cadence for use later in the game.) Each new adventure takes place on a semi-randomly generated map of Hyrule. The basic world structure is consistent between playthroughs: Death Mountain to the north, Lake Hylia to the south, for example. However, each screen of the overworld and each room in the game’s dungeons is randomly generated. Hyrule is familiar, but each new playthrough offers surprises.

The core of Cadence of Hyrule is in the movement and combat. Following Necrodancer’s lead, Cadence requires players to move and attack in rhythm to a collection of wonderfully hum-worthy remixes of classic Zelda tunes. Stepping or attacking to the beat increases a multiplier that grants better items when enemies are defeated. If you make a mistake, the bonus meter is reset, and items that gain power the longer you stick to the beat lose their potency. You are required to move in this fashion only as long as there are enemies on-screen. Clear a room and you can move freely. That can prove challenging, particularly later in the game. Unlike normal Zelda experiences where rooms may offer a smattering of monsters, Cadence of Hyrule teems with enemies that force intense moment-to-moment tactical decisions. (Note: an additional mode can turn off the need to stick to the music, but I never tried it.)

Keen enemy design is the secret to Cadence’s combat. Every enemy has strict rules on how they move and attack. Blue Slime? They move up and down between a pair of squares. Lizalfos? They stay put until you cross their paths, and then they charge in a straight line. Moblins will pause and toss javelins from a distance, armoured knights can only be attacked from behind. If you were to pause the screen, Cadence of Hyrule could be treated like the grid-spaces of Into the Breach or even something as elegant as chess. Take out the need to move to the beat, and you’re essentially dealing with a rudimentary Zelda tactics game. Each screen is a new sort of puzzle, and clearing out enemies often grants rewards like unlocking treasure chests or diamonds.

These diamonds tie into Cadence of Hyrule’s rogue-lite elements, which are thankfully less punishing than Necrodancer’s. While exploring, players can find tons of items for their quest. Some of these are permanent arsenal upgrades. There’s the bow, the hookshot, and plenty of other Zelda classics. Once discovered, they can be used for the rest of your adventure. There are also temporary items such as magic rings, torches, and boots that offer various perks. A special torch might reveal what’s inside chests before you open them; iron boots prevent slipping on ice. These items have a durability that wears down over time, and they can also be lost if the player dies. Diamonds can be spent on these temporary items at the beginning of a run to provide an edge. Diamonds can also be spent to permanently upgrade weapons. The result is that it doesn’t feel all that punishing to fail in Cadence of Hyrule. You might lose some items, and the room layouts in dungeons change, but the overworld map remains the same. As a result, it is very easy to restock and proceed with your adventure.

Wandering the overworld feels adventurous, as most screen have at least one secret to find. Famous locations like Kakariko Village or Gerudo Valley hide pockets of friendly characters to chat with, all of whom are charmingly rendered in a bubbly sprite-art style. Cadence of Hyrule mixes and matches visual designs from numerous 2-D Zelda games. It has the map from A Link to the Past, the softer character designs of The Minish Cap, and the lush overworld clutter of Link’s Awakening. These familiar elements mesh with the game’s soundtrack, a collection of remixes that range from lo-fi chillhop tunes to raucous rock symphonies and Bastion-worthy country twangs. Giving yourself over to these sights and sounds creates a sensory feast that rewards exploration and timing all at once.

The height of the experience is in the dungeons. There’s only around six total, but each of them strikes a fantastic balance between offering brainteasers and monster gauntlets. They’re never as tricky as their main-series counterparts, but smart item use allows a variety of solutions to puzzles. You might take a long path around to reach an area, or you might have found hover boots earlier that allow you to cross a gap early. 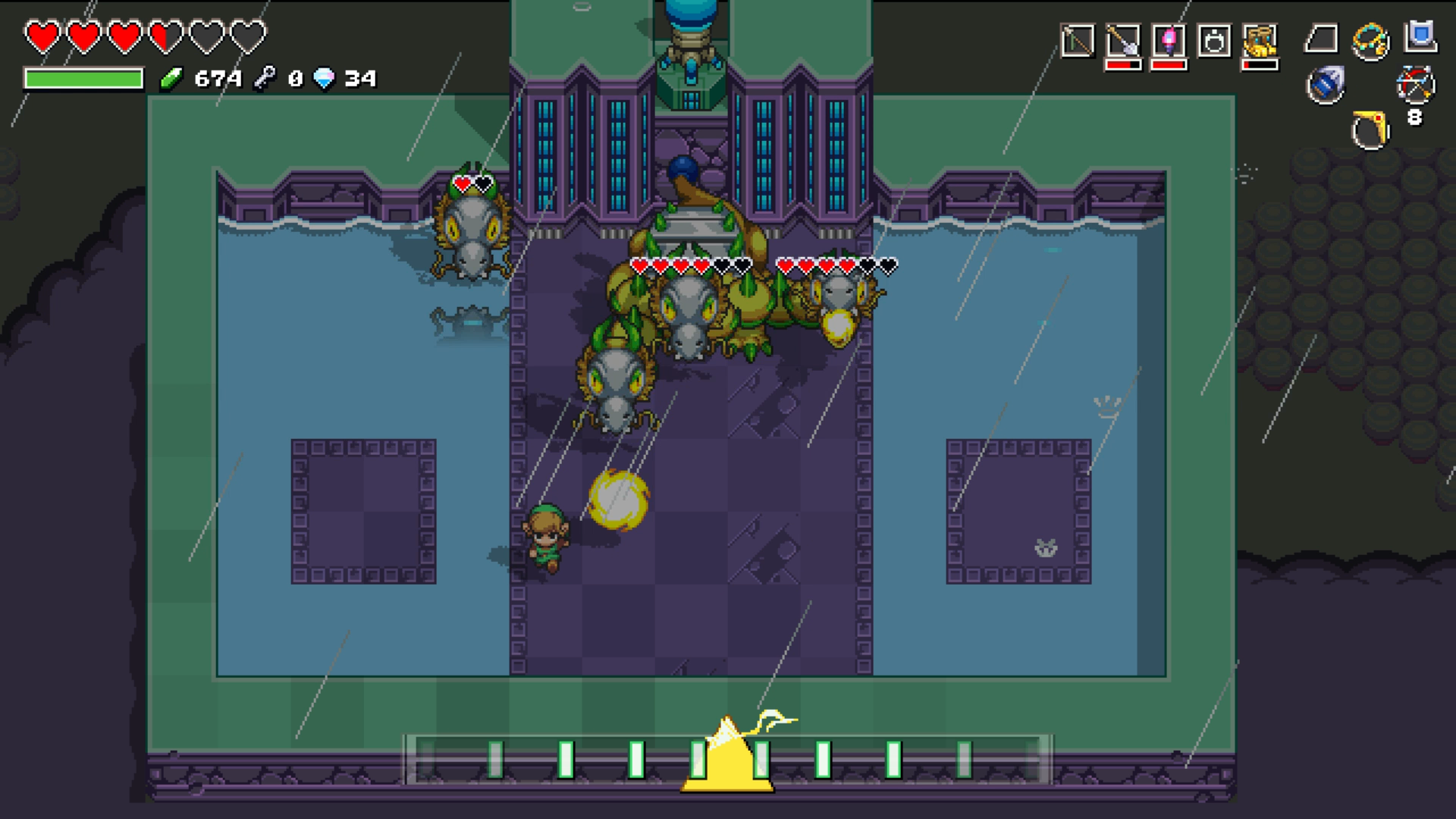 Dungeons culminate, as per the Zelda formula, in fights against difficult bosses. Usually, the challenge of Zelda games requires using a key item to defeat a dungeon’s boss. Cadence of Hyrule’s challenges focus on the music. These are the moments with the best tracks and the highest tempos. It results in some of the most deliciously intense fights that Link (or Zelda) have ever faced. Each boss has a variety of minion monsters and special attacks that require forethought and skill to avoid. A standout encounter in the late-game involves switching between Link and Zelda to dodge certain attacks. Cadence of Hyrule is worth playing for these encounters alone.

Cadence of Hyrule is a short experience, lasting only a handful of hours before the magic ends. It’s not as in-depth as a normal Zelda experience, but it compensates with an infectious world and difficult combat encounters that immerse players in its soundscape. Grinding down the harsher edges of Crypt of the Necrodancer has created an approachable and toe-tappingly fun sprint through Hyrule. Players who push through and embrace the new pace and feel will find a Zelda adventure worthy of its pedigree.