We Put Microsoft’s Project xCloud to an Unexpected Test

It’s unclear how accurately one can judge a new game-streaming service at a show like E3 here in Los Angeles, when the value of the service is going to be whether it works in normal situations. E3 ain’t a normal situation. But after Xbox chief Phil Spencer asked me yesterday if I wanted to try, I figured I should give it a shot.

The promise of the service and competing ones like Google Stadia is that it’ll allow people to play games with just a controller and some sort of screen—a phone, tablet, TV, etc.—without the need for gaming hardware. Given a fast enough connection, the loop between pressing buttons, transmitting your commands to a server somewhere, and having that server send graphics back to your screen can theoretically replicate the experience of playing a game off a home console.

The problem with E3 is that if that kind of thing works at, say, the Xbox showcase stage at the Microsoft Theater, maybe it’s because they set up a specific network or kept the servers nearby or otherwise gave themselves an unnatural edge.

Or if it doesn’t work, maybe it’s because it’s not done or there’s signals floating around in the air at, say, the Xbox showcase stage at the Microsoft Theater.

I figured I’d try it after Spencer urged me to. Just a few days ago, I’d heard him talking on a podcast about how he’d used it on a bus in Nairobi, connecting with servers in Washington state. He’d tried Crackdown 3 and said it ran, but not really in a way you’d play it, which seems reasonable given the non-ideal scenario there.

Yesterday afternoon, I went to the Xbox showcase stage and found the same setup that my Gizmodo colleague Alex Cranz had used a day before. Her experience was mixed. They set it up for you to play a game on an Android phone that is connected to a controller, all communicating with game servers back in the Bay Area several hundred miles away. They had Halo 5, Hellblade, and a Forza game running this way. The games were responsive for Cranz, but as her signal worsened, the graphics would downgrade. She had some disconnects, too. She counted 26 Wi-Fi signals in the area and figured that there was just too much interference. 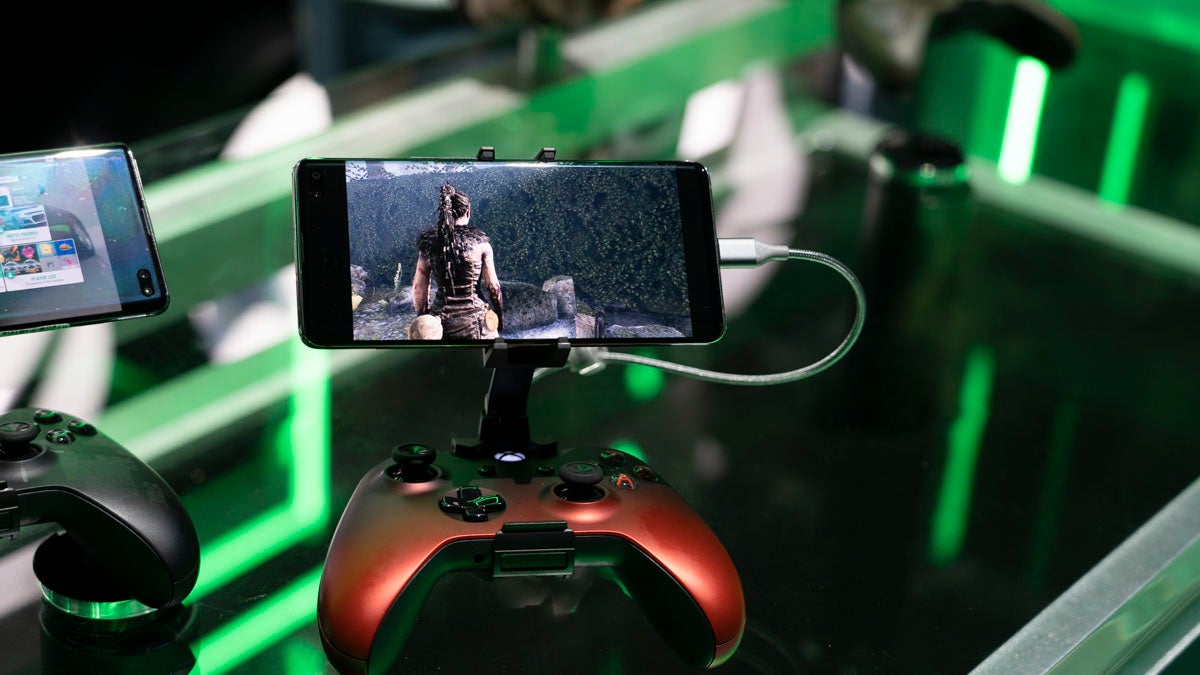 The Project xCloud set-up on Sunday, before they started hard-wiring them to the internet. (Photo: Alex Cranz/Gizmodo)

By the time I got there on Monday, all the demo stations were now plugged into Ethernet cables. This struck me as a poor way to test the experience. I mentioned this to a person who was working the demo area and had come by to offer help. I was polite about it, but as I played Forza and it ran perfectly smoothly, I was saying I couldn’t really judge this as a wireless, play-anywhere experience when the thing is plugged into the internet.

The Ethernet cable connections they were using weren’t purely a cheat. These game streaming services would be great for home gaming, where using a wired internet connection would be reasonable. It’s just not how Microsoft is pitching xCloud now, since they’ve only announced it as a mobile thing for its rollout, starting with public trials later this year.

As I suspected, this wasn’t the venue to get a fair test of xCloud. So be it—I was ready to walk off when I was approached by Bill Stillwell. Stillwell is the director of product planning for the Xbox gaming cloud programme, and the person I’d been talking to at the demo station had told him I was, let’s say, not fully sold. He wanted to know what he could do to clarify things.

I explained to Stillwell that I wasn’t much of a cloud gaming septic. I’d seen some Ubisoft developers run the new Gods &amp; Monsters game off of a phone and controller via Google Stadia just a couple of days ago in a venue with pretty poor Wi-Fi. I told him that I assumed the tech exists for this all to work, and that the real questions would involve whether Stadia or xCloud would work in a given part of the country or world, whether it would run afoul of data caps, whether the pricing models various companies would set would make sense. The basic tech, though, I told him, I figured would work, and anyone curious would likely be able to try it and see if it’s good enough for them. You just can’t test any of that at E3, I said.

Stillwell told me much of what my colleague Alex had reported about why they were switching to a wired connection at E3: too much Wi-Fi interference, basically. I told him I understood, that it made sense to me, that no one could really expect this to be a great spot to text a service like this anyway. It just was what it was. I was ready to move on.

I sensed that Stillwell wasn’t satisfied, and he suddenly made a suggestion. He got the attention of one of the demo workers and asked them to unplug one of the units and put it back on Wi-Fi. He was taking a risk. Interesting! 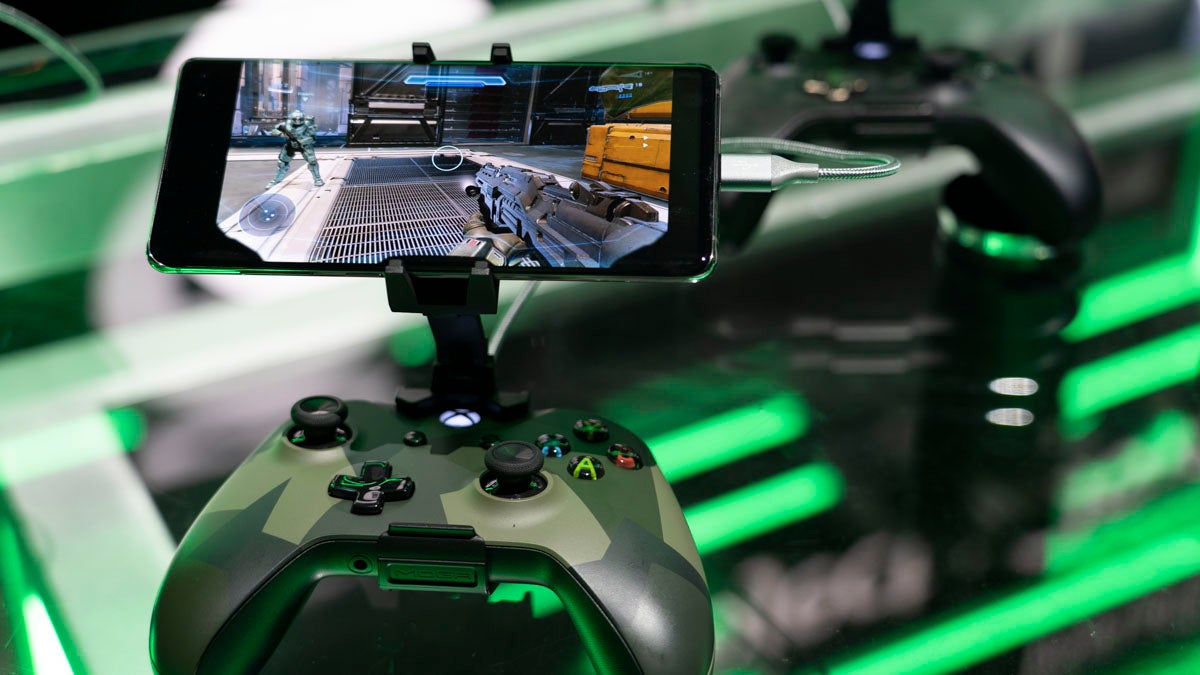 I was handed an untethered phone-controller combo running Halo 5. No Ethernet cable, just Wi-Fi in a room no doubt still full of signals from nearby reporters walking around with mobile hotspots.

The result? Halo 5 ran fine. I tried it for a couple of minutes. It was mostly smooth. I saw a framerate hitch or two but was largely fine running around, shooting and swinging an energy sword. At one point, the graphics got blotchy, but they snapped back to a clear resolution.

I handed the unit back. I’d had the experience I had expected from the get-go. It ran well enough that the tech seems viable to me as a way to check in on a game when I’m not near my console. It didn’t run so well that I’m ready to throw my console out and just play games this way. And it all happened in an unusual setting that is nothing like where I normally play games, so I can’t really judge it. I also can’t tell what I’d think of this service if it cost a lot of money or if it was a free service or perk of Xbox Live Gold or what.

So that’s xCloud. It’s too hard to judge it now, but I’m all for trying it later this year. It could be a really nice extra option for accessing games I like playing. You know what I can judge, though? The name. I’m not a fan. Thankfully, Spencer told me it’s not final.