The only thing Crystal Crisis, out now for Switch and coming soon to PlayStation 4, is missing is the licensed Capcom characters. Instead of chibi versions of Ken, Chun-Li, and Morrigan, developer/publisher Nicalis has populated its take on puzzle combat with a cast of indie darlings. It’s got Quote and Curly from Cave Story. Aban Hawkins from 1001 Spikes makes an appearance. My favourite sword-wielding princess, Solange, takes a break from Code of Princess. Astro Boy? Sure, why not? I particularly enjoy the inclusion of Turbo Duo mascot Johnny Turbo, who’s both a fighter and the voice of the game’s tutorial. 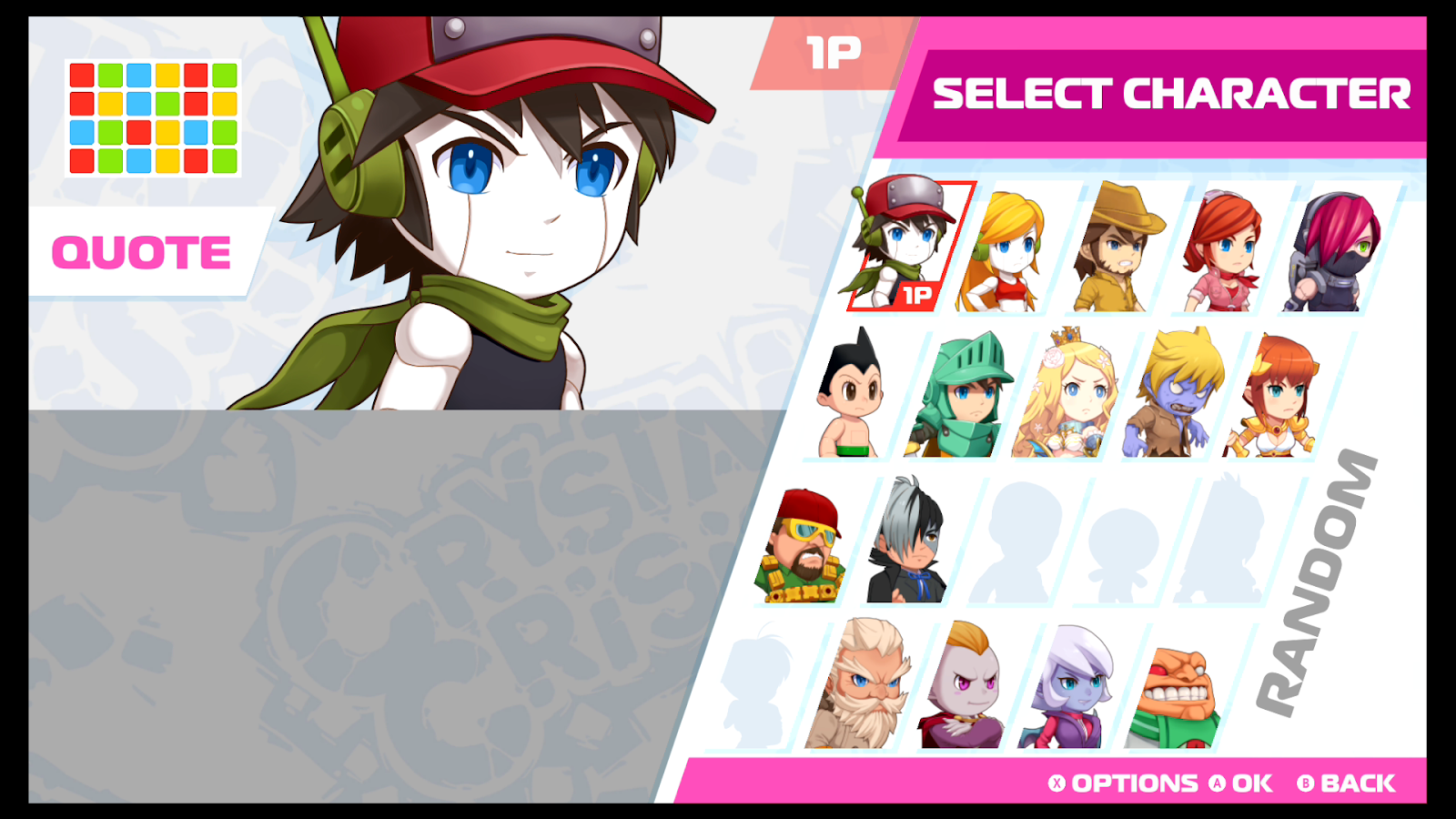 It’s an eclectic mix of characters, each bringing their own quirks and special abilities to the puzzle-fighting arena. The core game involves two or more players matching gems as they drop from the top of the screen in pairs. Players match same-coloured crystals into clusters. When a special gem called a “spark crystal” appears, matching it with a similarly coloured cluster will cause it to disappear, dropping garbage gems on their opponents. Garbage gems can’t be matched until a timer counts down. The goal is to bury opponents in garbage gems until there’s no more space for blocks to drop. 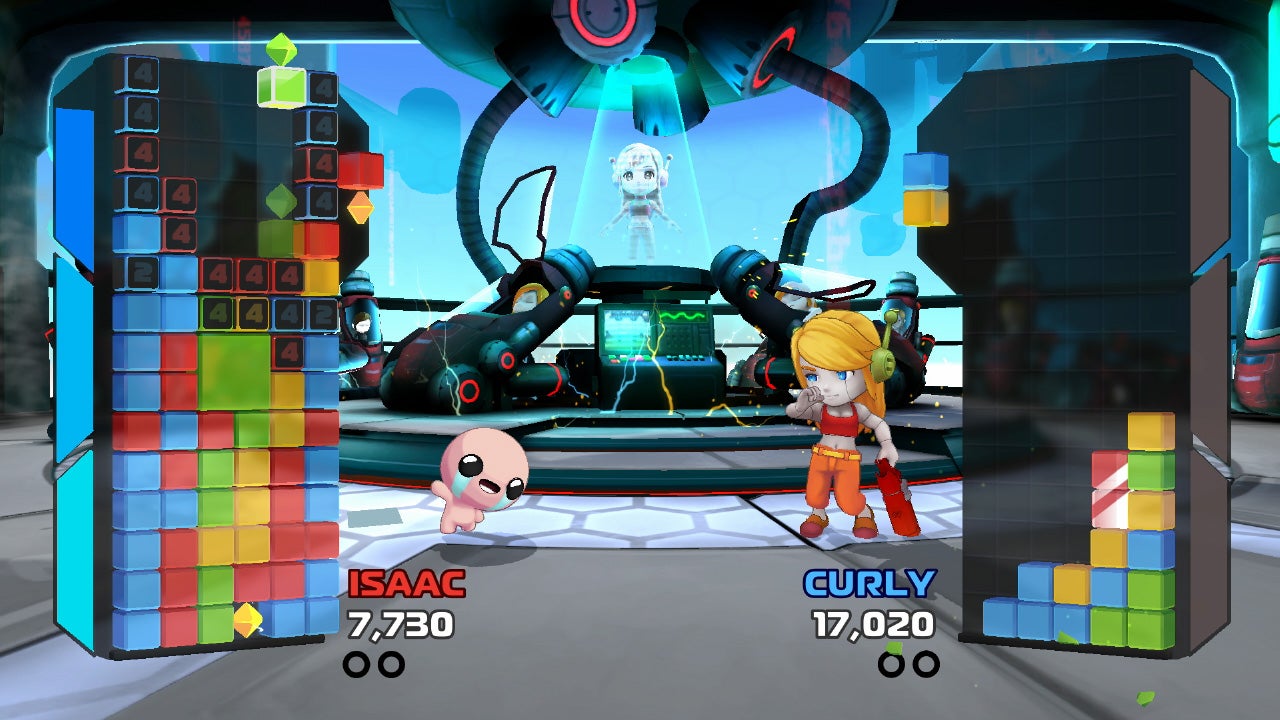 As players make matches, their “burst gauge” fills. Once filled, they can activate a burst power. Each character has unique defensive and offensive burst powers. For example, Johnny Turbo’s attack burst slows the speed at which his opponents’ gems fall and prevents them from insta-dropping (slamming) gems. His defence burst increases the rate at which garbage gems count down, making it easier for him to recover from strong enemy attacks. Burst powers can turn the tide of battle in an instant, so choosing a character is much more than a cosmetic decision.

Bursts aren’t the only way Crystal Crisis sets itself apart from Super Puzzle Fighter II Turbo. Pairs of gems in the new game can wrap around the sides of the screen. If the player has a red-and-blue pair dropping, they can have one drop on the far left of the screen and one drop on the far right. It’s just a slight change to the Puzzle Fighter formula, but it makes a big difference. And for those who hate differences, both bursts and screen wrapping can be turned off in the game’s menu. 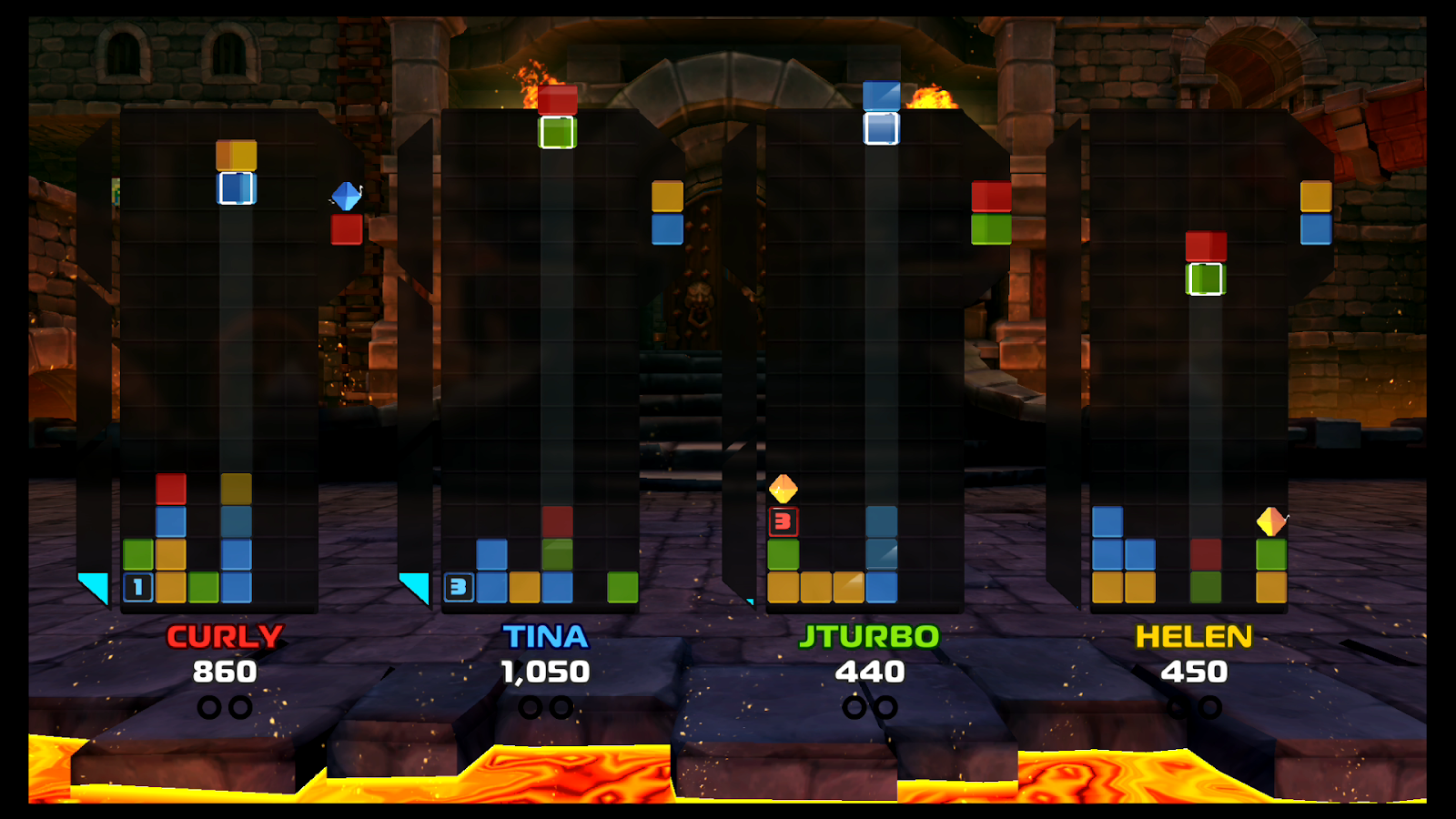 Crystal Crisis gives players a lot of different ways to play. There’s an arcade mode, where players can run each character through a gamut of battles. Story mode is slightly more guided, giving players a choice between which two combatants they wish to play as for each stage of the narrative. There’s local versus for up to four players, which is lovely but lacks the flashy presentation of two-player battles. There are ranked and casual online matches as well. Most of the game modes can be played in multiple ways as well, with options for survival, tag-team, and memory battles unlocked as players progress. There’s even something called inline mode, which removes spark crystals, turning Crystal Crisis into a basic match-three style puzzle game.

What impresses me most is Crystal Crisis’ presentation. The music is excellent. The menus are lovely. Best of all, Nicalis got a legendary voice actor to narrate the game. Listen.

That’s Peter Cullen, AKA Optimus Prime. When Optimus Prime says you’ve won the round, you’ve really freaking won the round, dammit. If Super Puzzle Fighter II Turbo had gotten this level of love and care, we wouldn’t need a Crystal Crisis. But it didn’t, and we do, and it’s awesome.