The New Castlevania Collection Is a Bloody Good Time

Castlevania Anniversary Collection isn’t quite as good as it could be, but even a limited feature set can’t stop these classic games from still being great in 2019.

Released Thursday for Xbox One, PlayStation 4, PC, and Switch (the last of which I played), Castlevania Anniversary Collection brings together eight of the early games starring members of the Belmont family, all of whom are renowned for being adept at killing vampires but bad at not falling through staircases. The £16 package includes the original Castlevania trilogy for the 8-bit NES, the first two Castlevania Adventure spin-offs for the Game Boy, Super Castlevania IV for the SNES, the never-before-rereleased Castlevania: Bloodlines for Genesis, and the never-before-translated Kid Dracula for the NES, which previously was only available in Japan.

It’s the presence of that last game, which Konami translated into English for the first time for this collection, that keeps me from saying that the publisher did the “bare minimum” for this release. After all, Castlevania fans can’t even agree on whether or not this game, a cutesy spin-off in which you play as a chibi Dracula fighting cartoonish parodies of classic Vania villains, is even officially part of the series. Nobody would have batted an eye had Konami chosen to not include this. But it went the extra mile anyway, and thereby significantly raised the appeal of this collection, since Kid Dracula is a lot of fun. 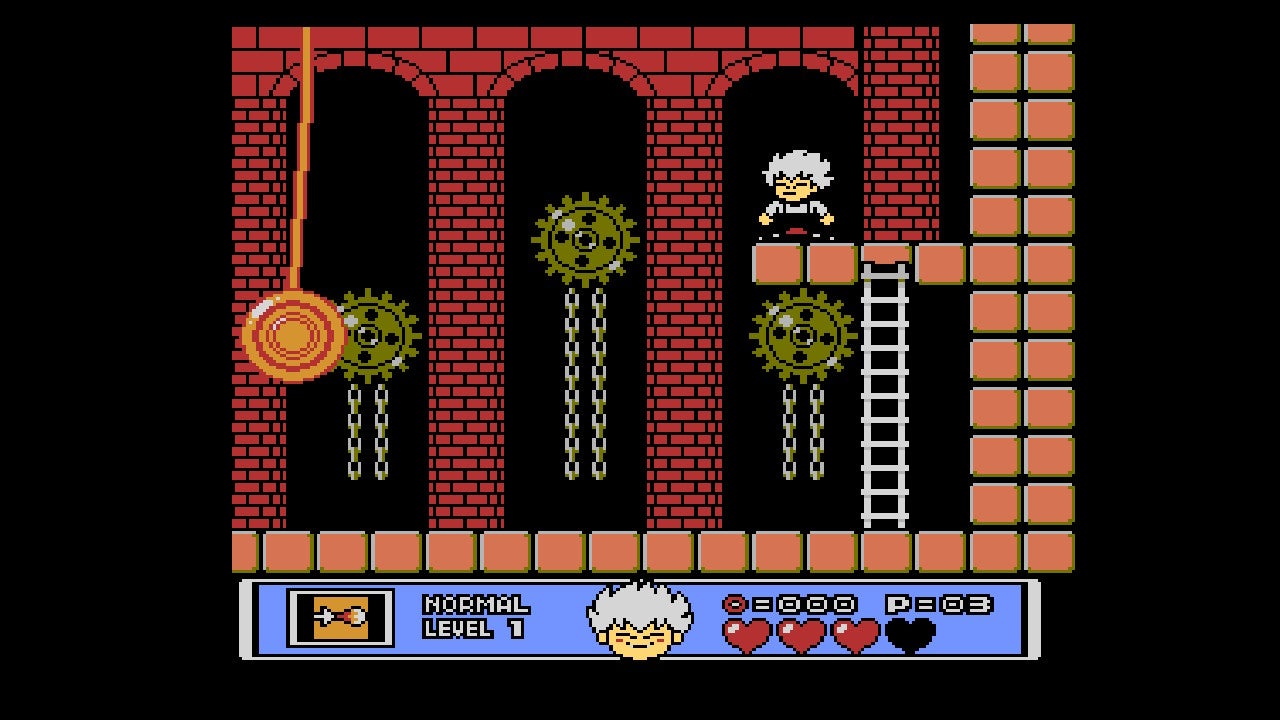 Having played around in each of the eight games for a while, I’m not seeing any issues with the emulation except for, as other players have noted, a weird high-pitched beeping sound that occasionally plays during certain music tracks on the NES games. Hopefully that can be patched out quickly. Otherwise, everything seems fine. This collection’s version of the Game Boy game Castlevania: The Adventure is a sluggish mess riddled with slowdowns, but I checked on an actual Game Boy and that is perfectly accurate, so there you go. (The sequel plays a lot better.)

There aren’t a whole lot of settings with which to mess around. There’s a single save slot for each game, which feels a little stingy. Wouldn’t it be nice to have multiple saves at various points in these challenging adventures, especially in games like Castlevania III, which has branching paths?

The available display options are fairly industry-standard by this point. You can display the games in their original 4:3 aspect ratio, choose the less accurate but perhaps more visually pleasing “pixel-perfect” mode where each pixel is a square, or stretch the whole game out to fill your 16:9 television if you’re a total weirdo. You can put faux scanlines on these images if you want that classic cathode-ray aesthetic. And you can either leave the unused space blank or put one of two frames around it. 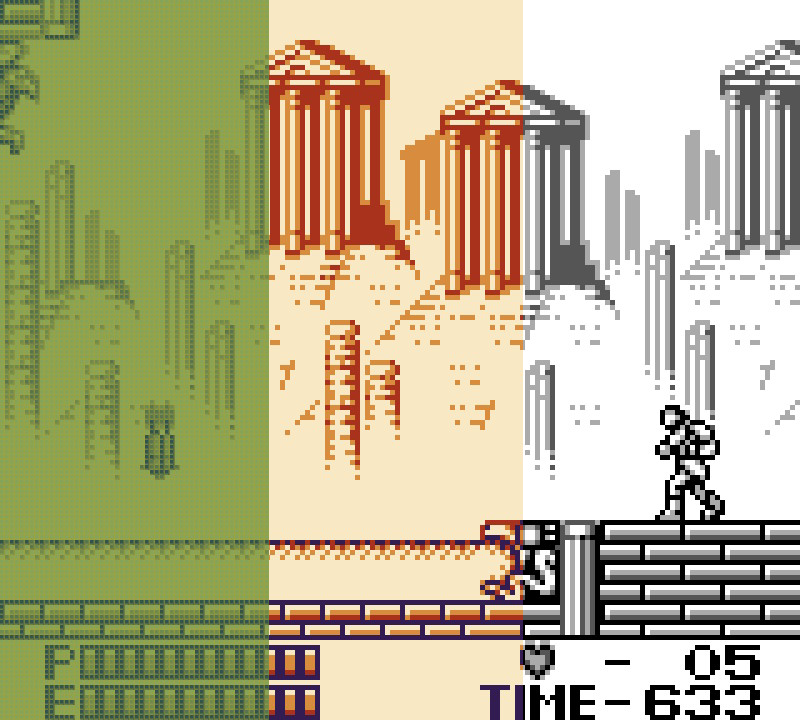 Note: This is just a Photoshop. You cannot actually divide the screen up like Neapolitan ice cream. This is just to show you the different Game Boy colour options.

The Game Boy games get a different set of display options. You can view them in the original black and white, choose a Super Game Boy-style sepia tone, or choose a “dot matrix” filter that adds a hair-thin outline to each individual pixel and uses a green colour palette, for an experience that closely resembles the original Game Boy’s cheapo low-tech display. You can even put scanlines on the Super Game Boy style, which is a nice detail.

The only bonus feature is what is basically a PDF ebook filled with information about these eight games, including an interview with celebrated Bloodlines composer Michiru Yamane, lots of design documents and sketches, and more. There’s a significant amount of stuff in there for Castlevania fans, so it’s just a shame that it’s presented in such an inelegant way. It’s really annoying to have to scroll and zoom around a PDF to read the text and view the images. 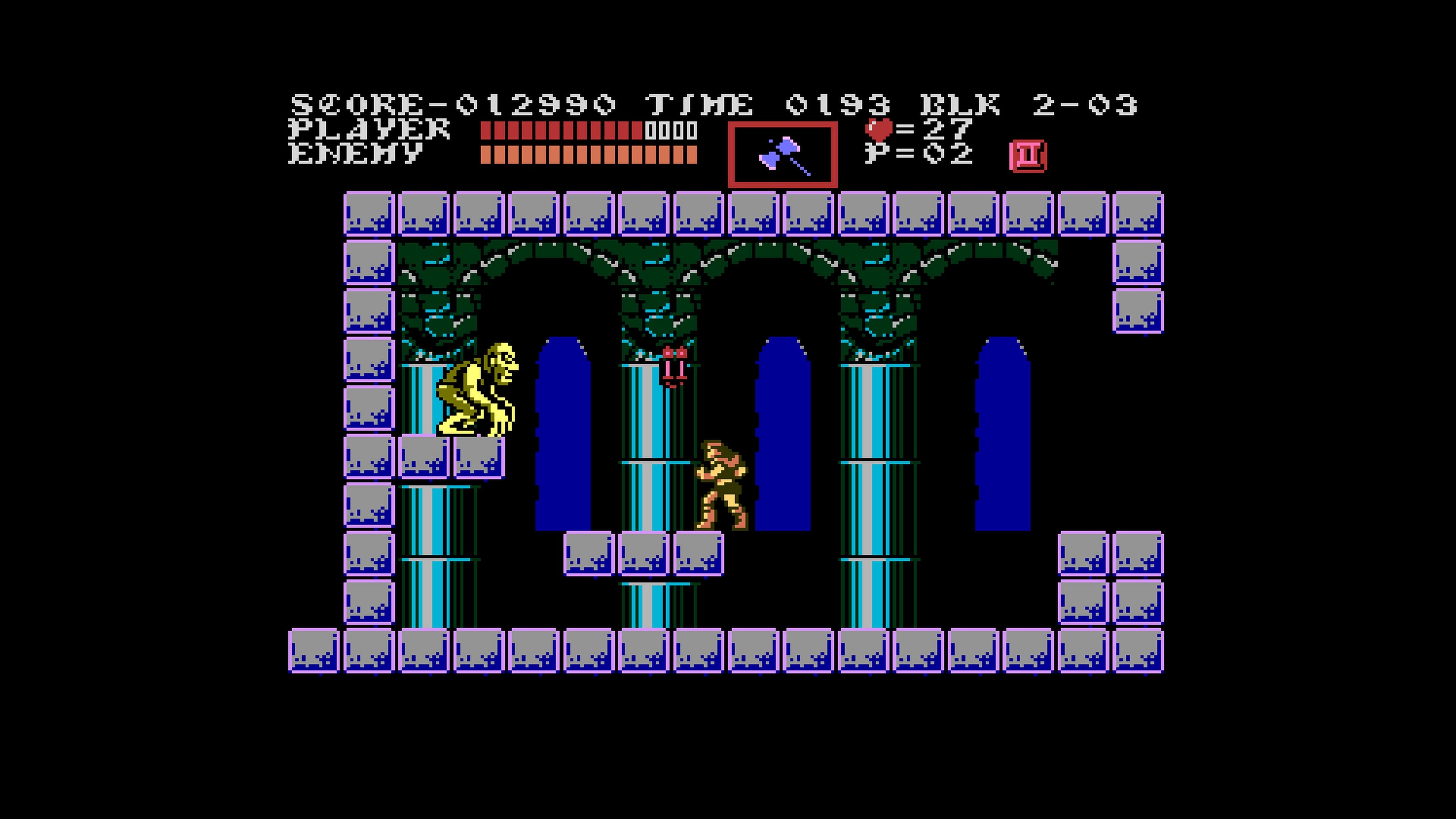 Much like Konami’s Arcade Classics Anniversary collection, you’re currently stuck playing the Western versions of each of the games. This is especially disappointing for Castlevania, since the subject matter of the games meant that they were often significantly altered for release in the West. Playing the Japanese versions means more crosses on tombstones, more Satanic imagery, and more, I don’t know, ancient marble statues with their boobs out. Castlevania III also had much better music in its Japanese version, thanks to a special sound chip. Konami, to its credit, might not have gotten this right the first time but has promised to add Japanese versions in via a patch that will arrive “shortly.”

If the company is patching those in, maybe it’ll add some other features too, like extra save slots and button remapping. Dare I dream? As it sits now, Castlevania Anniversary Collection is an excellent deal. The emulation is accurate, the features are all right, and the games themselves are great. I’d really love to see a follow-up collection with later games like Rondo of Blood, Symphony of the Night, and the Game Boy Advance trilogy. For now, this is a solid, if imperfect, collection of the origins of a classic series.