WILL: A Wonderful World: The Kotaku Review

When I booted up the Switch port of WILL: A Wonderful World, the game told me about its autosave function. Then I saw this, set next to a red megaphone icon: “This game includes occasional **** plots. When shocked or surprised please scream loudly and disturb your neighbours.” The stars could refer to anything—botched assassinations, a dubious student/teacher relationship, the bloody politics of underworld gangs—but that’s the point. “Pick a dark night, make some hot coffee and have some tissues ready,” the next screen said. “Then, start your adventure.” That adventure is packed with so much story that you can’t help playing a little more—even if it doesn’t all work.

From the moment you turn the game on, WILL: A Wonderful World is full of truly wild shit. It plays like a telenovela as you move through whiplash-fast tonal shifts: You’re just as soon gut-checked by a battery of melodrama as roving through a jester’s court of toilet jokes and whimsicality. You play as an amnesiac girl who, as explained by her dog companion, owns what is essentially a fate-altering pen. Other characters in the game send you letters asking for help; these letters contain certain lines you can swap the order of to change the game’s narrative. For example, you might move the words “one hour later” to make a character stuck in a Saw-like death trap carefully figure things out instead of flying into a panic and trying random things. As stories get more complex, you might find yourself swapping words from two totally unrelated stories, combining pieces of a street-wizened alley cat breaking into a building for water and a socially inept nerd’s run-in with a notorious serial killer. 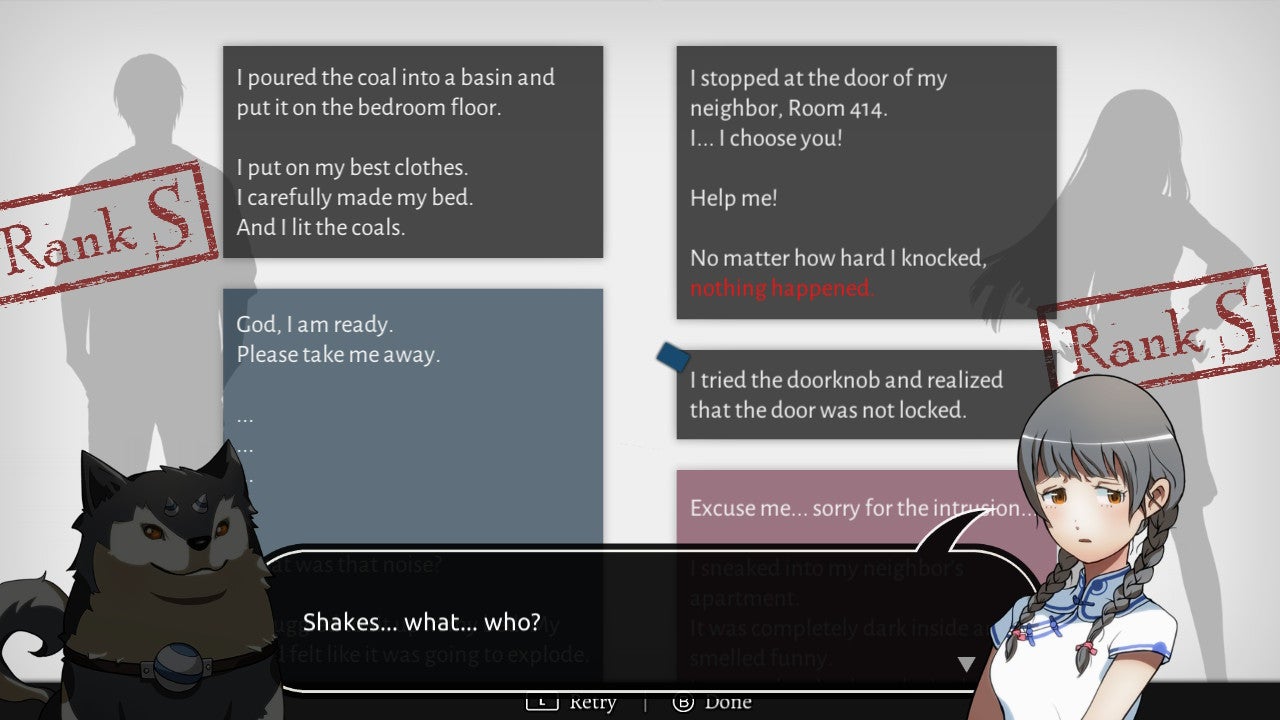 Multiple aspects of a letter can affect a narrative change, and it’s not always clear which piece will lead to which of a story’s numerous possible outcomes. The game provides some hints, especially on Normal difficulty, where certain words appear in red to gesture at what you’re supposed to do. (The aptly named Lunatic difficulty just gives you walls and walls of text to parse without these hints.) These hints aren’t always enough, though, especially as stories and their possibilities get more complex. Sometimes, a combination of sentences that you haven’t tried yet yields the same bad ending that you’ve already gotten. I often found myself resorting to trial and error.

There are a couple reasons to try to get every ending. One is for the completion of in-game objectives like the dictionary, which takes words and phrases from stories and provides background information about random things that come up in the game’s world via letters: assault weapons, stuffed animals, diseases, human trafficking practices, fake anime series. The dictionary does a little to make the characters’ world and stories feel real, but many of the inclusions felt more like the writers trying to show off their homework by including extra details that couldn’t fit into the already-stuffed main game. 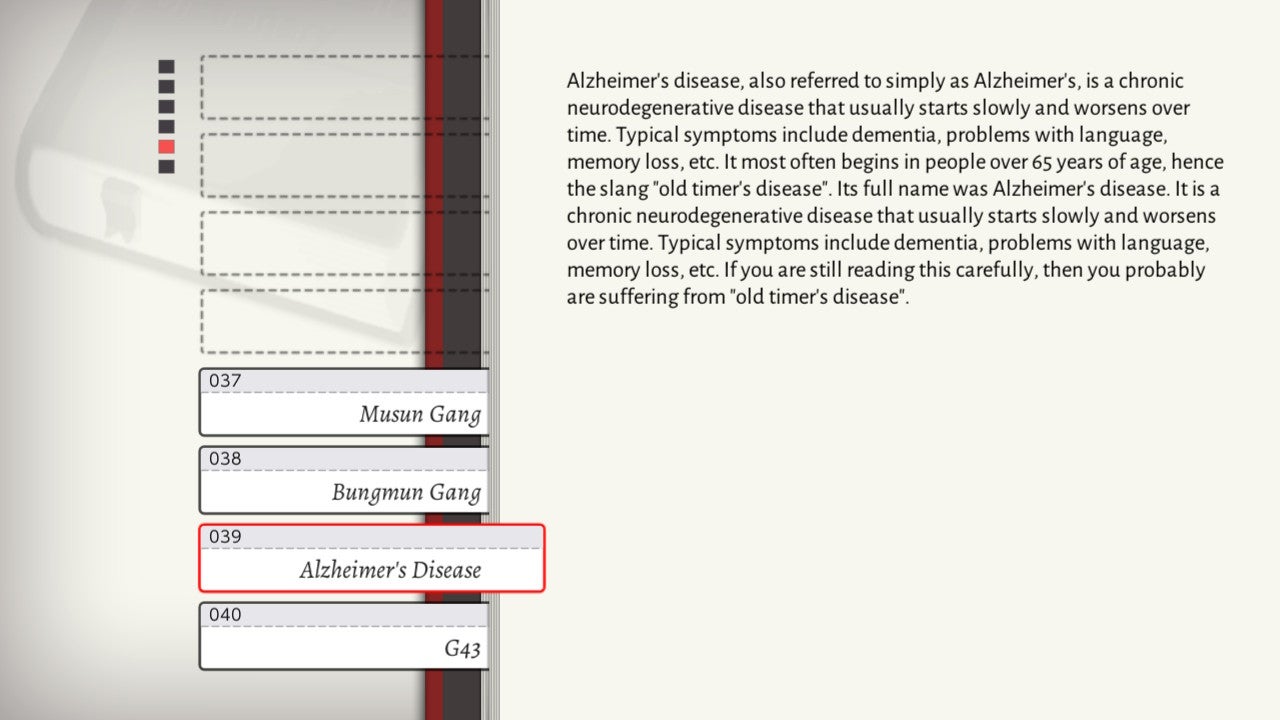 The other reason to collect endings is the game’s long story flowchart, which the game makes a big to-do about. “Is giving everyone their happy ending really the best thing to do?” it asked, repeatedly. For all the fanfare around these diverging paths, the option to actually change them appeared fairly late in the game and didn’t figure as seamlessly or impactfully into the story as I would have hoped. That was disappointing given the complexity you see in other visual novels and puzzle games with similar mechanics, which tend to make better and more consistent use of choose-your-own mechanics. The “if-then” feeling that makes these games work is lacking in WILL, and the difficulty of figuring things out ultimately felt inflated.

WILL: A Wonderful World

There were multiple moments when the game bashed me over the head with a mechanic early on only to implement it much later. For example, early in the game, you’re told that orange text is very, very important, but not necessarily why. The game even soft resets you if you fail a quiz about some orange text. The orange text actually figures into the game much later, in a deeply convoluted way. This spurred one of my many gruelling sessions of backtracking and replaying stories I’d already solved, trying to figure out which letter’s endings to change to progress and, most frustratingly, a code to crack for one letter that took me across a few prior letters to a random doodle I could barely even see on first read. The mechanic felt too hyped for how little it actually figured into the game, especially with the overly clever way it was introduced. It felt like more of a “gotcha” than a gameplay mechanic. 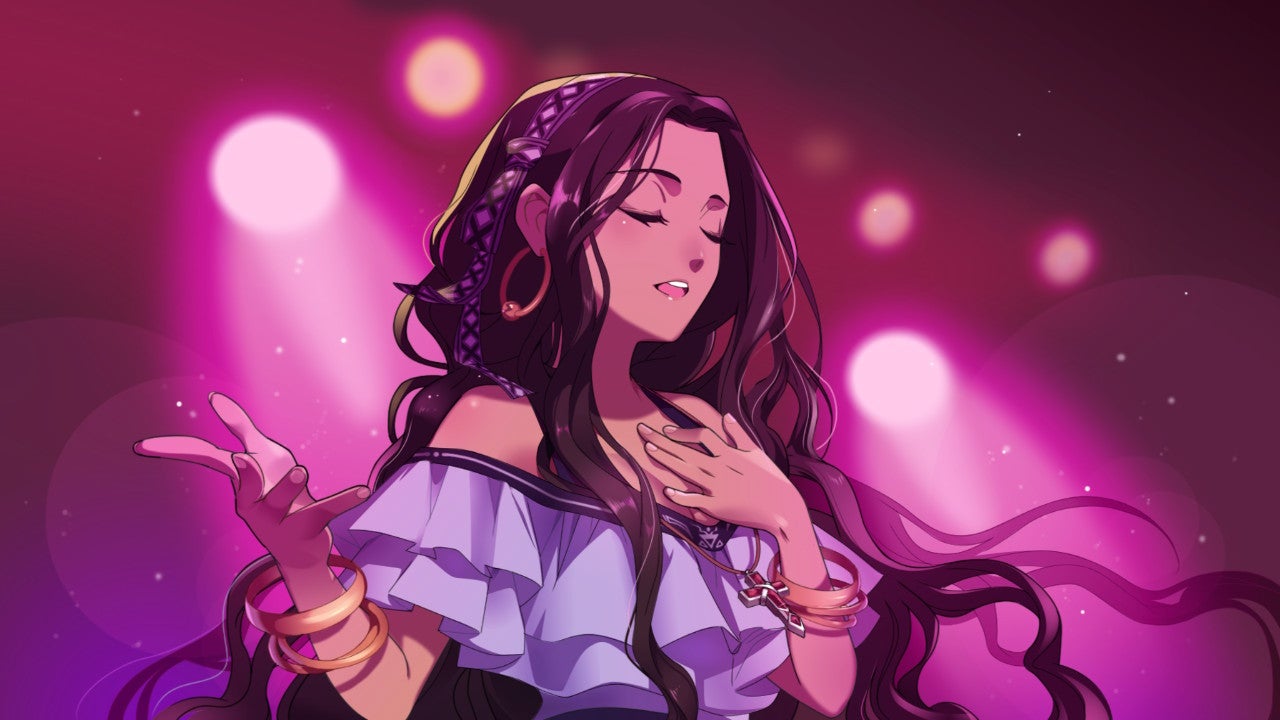 Even when WILL’s gameplay falls short, the story’s ridiculous twists and turns keep it otherwise interesting. The dozen or so characters all have distinct voices. Take Jimmy, a painfully shy boy whose crush on a classmate veers rapidly into creep territory. He writes, “I wrote down my email address on a piece of paper. Then I bought a drink and quietly left the cup on the counter of the claw machine, with the note under the cup. Now, I just needed to wait for her response...The first night, I didn’t get an email… The second day, all I got was junk mail. The third day… (o_o ).” I’d already seen in the classmate’s story that she had no idea the paper was there and was terrified she had a dangerous stalker. Seeing the story from Jimmy’s point of view added levity and depth along with emoticons. There are lots of little moments that use dramatic irony well, like a story of star-crossed lovers that evolves as you get letters from different characters and see what really happened.

The narrative occasionally veered too far into the pulpy for me—I struggled to relate to a story about a grown art teacher and a teenager falling in love, especially as the game found random ways to ruin her life for not expressing her feelings. I also found it unsettling how far into the macabre the game went with a child abuse arc, and that wasn’t the only instance of violent trauma as entertainment. But overall I fell into the rabbit hole of the story, punctuated by atmospheric music, and played late into the night to find out what would happen next. Will this pious woman who just wanted a better life from her family escape her vicious kidnappers? Are these sexy cops about to date? It felt a lot like bingeing a TV show. 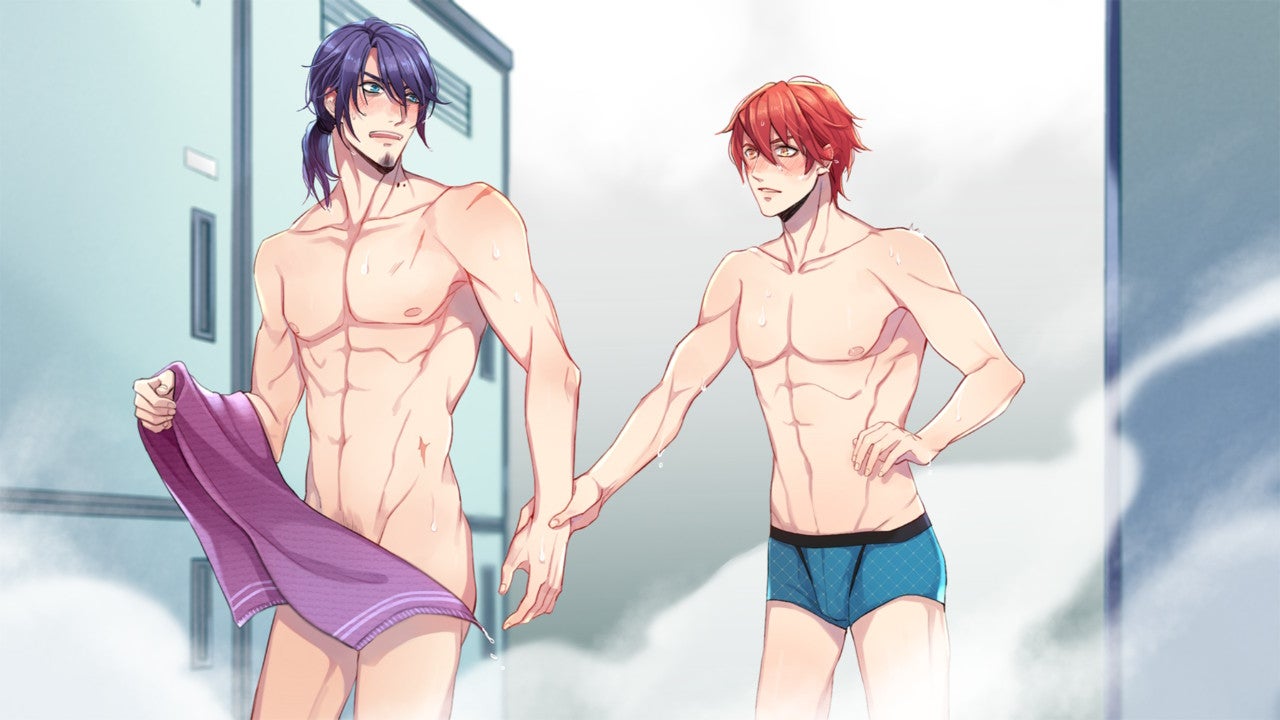 Unfortunately, that momentum fell way short at the climax. I won’t spoil it, but as the stories converge and diverge into the broader plot of the game, the story shifts more prominently to the tale of the girl and dog who control everyone else’s plots. At that point, the idea of controlling the story simultaneously becomes the narrative and gameplay focus, but a lot of this involves trying things and seeing what sticks. While the narrative accounts for that uncertainty in-world and there are hints about what to try, it doesn’t make the ensuing scramble to figure out what to do next much fun. I didn’t get the satisfying breadcrumbs-to-revelation sensation I wanted from a game so full of entertaining drama and catharsis. The text gets heavy on exposition as the plot switches its focus, outright explaining an elaborate backstory that only appeared in slivers of the much more evocative and descriptive letter scenes. The narrative shifts from “It was a dark and stormy night” to “Here is how this all works.” As a result, I found myself caring less about the girl and dog than the characters whose lives I was changing in the first place. 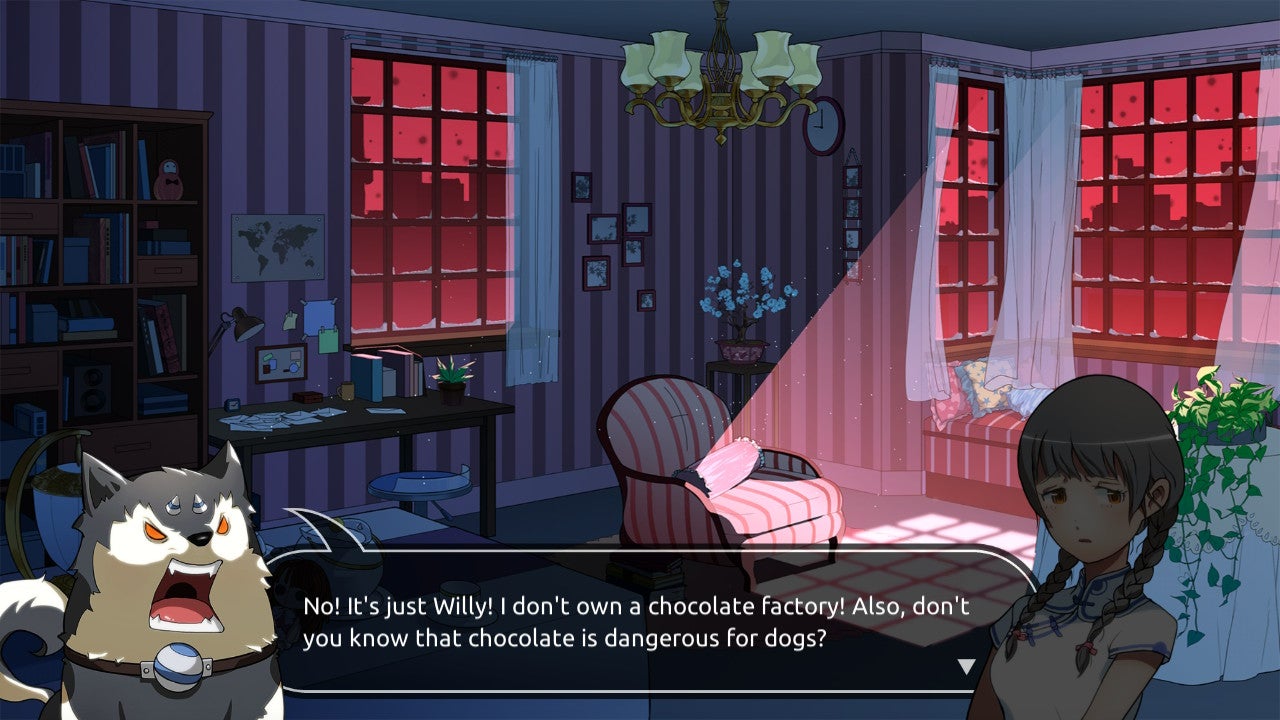 There are certainly some “scream loudly” moments throughout WILL. It’s not for the faint of heart: a warehouse standoff between police and gang members can turn into a violent massacre if you don’t kung fu correctly, and a wrong choice with a vial of poison can lead to a character being mutilated beyond recognition and sold into slavery. But for all the tongue-in-cheek humour the game has, the attempt to be “meta” resulted in WILL exposing too much of its wiring for very little payoff. I was ultimately left feeling like I was in the writers’ heads instead of their story, and the game overall felt self-serving as a result. But like my favourite reality TV shows, I kept coming back anyway.