The Division 2's First Raid Won't Have Matchmaking, Even Though Ubisoft Implied It Would

Adopting the approach of its shoot-and-loot rival Destiny, The Division’s first raid, set for release on Thursday, will require that players manually connect with others to attempt the mission. Matchmaking will not be an option, the game’s developers at Ubisoft Massive have confirmed, which has infuriated some players and lit up the game’s social media channels and forums.

In Destiny, raids are intended to be tough challenges filled with battles and puzzles that require communication and teamwork, the kind of stuff that strangers are presumably more likely to fail at. The Division 2’s raid will follow a similar template; it involves trying to liberate Washington DC’s main airport from an enemy force, and it is also being touted as a complex endeavour requiring lots of teamwork and rewarding victors with exclusive loot. It’ll require players to have a Gear Score of 490 or higher, ensuring it’ll only be accessible to players who reached the furthest depths of its endgame.

Fans aren’t just upset that they won’t be able to play it if they don’t know seven others players ready to attempt the raid with them. They’re upset because an official promotional image for the game’s online services released earlier this year stated: “matchmaking is provided for every game activity and difficulty level.”

“We do understand people have pulled up things we’ve said in the past about this subject, so here’s where it’s at in front of me right now, verbatim,” Division community developer Hamish Bode said in the franchise’s weekly State of The Game developer stream today, before reading an official statement: “‘We decided to not include matchmaking, as we don’t think this would make a good gameplay experience for random groups. The Raid will test your ability to communicate well, have a good build set up and will require great teamwork to beat encounters.’”

Raids in Bungie’s Destiny games have never supported matchmaking, instead requiring groups of six players to manually find each other and commit to playing. Destiny 2 introduced a “guided games” feature that lets users sign up to be brought along for a ride through a raid. Most of the game’s other multiplayer modes use matchmaking, as do The Division 2’s, allowing players to simply pick an option, have the game find other players to connect to them and let them proceed with co-op or competitive play. 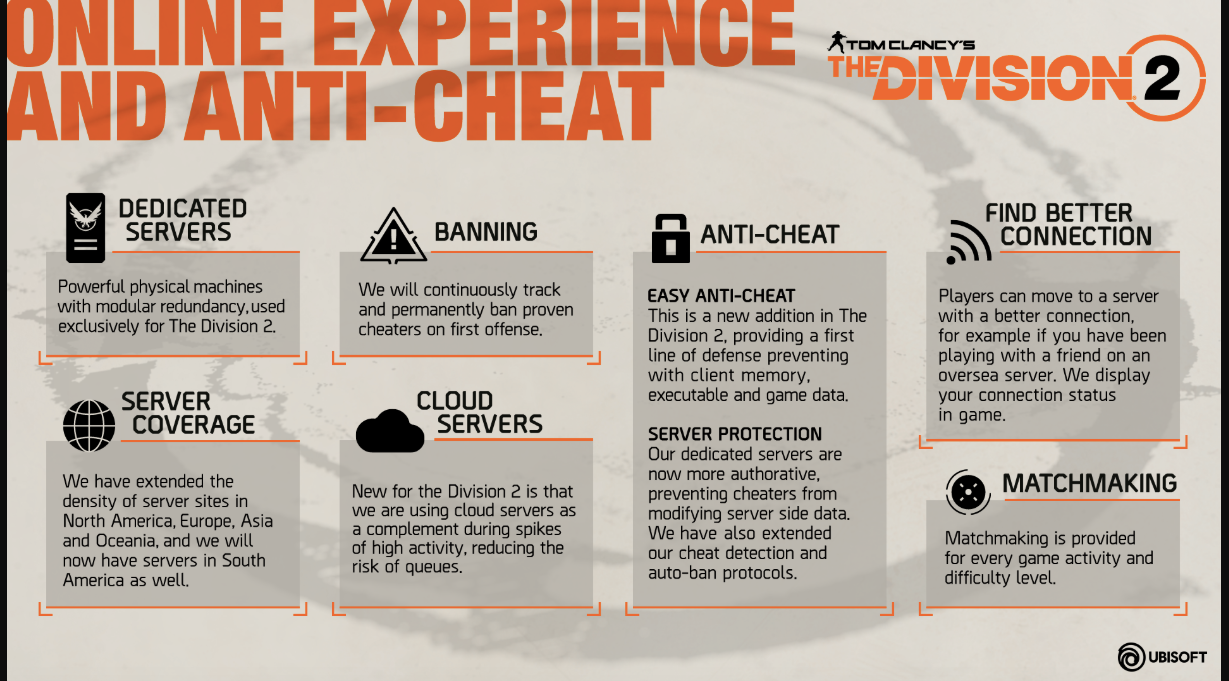 “We’ve been having a lot of discussions about it,” live content manager Yannick Banchereau said during the stream. “We want to make sure this experience is an experience where you have to prepare for it, where you have to build a team. You have to organise yourself. You have to really try to define the builds that everybody is going to be using, the roles that everybody’s going to be playing. Then you attempt, you potentially fail, then you talk about it, you change your strategy and all of that. So, communication, preparation and organisation are extremely important for us… For that, we don’t think that matchmaking is a good solution. That would mean there is a risk you would end up in a group that doesn’t talk to each other, doesn’t talk the same language, you didn’t get prepared for it. It’s really not the kind of experience where you matchmake, you DPS [read: damage and defeat enemies] and then you get your loot. It’s something completely difficult.”

Banchereau’s comments did not immediately quell the State of the Game stream’s live chat, which was full of thumbs down emojis and comments such as “you are making a mistake” and “​they’re so proud of this raid that they just allienated [sic] a huge player base from” and “im in a clan of 40 plus but its still a ball ache to get 8 people that are free for a few hours.” On the game’s subreddit, there were so many threads complaining about the matchmaking decision over the last 12 hours or so that mods made a megathread to capture what has largely been frustration from players who feel misled and worry they’ll miss out on this addition to the game. On Twitter, fans kept posting the image about the game’s online services that claimed that matchmaking would be available for all activities in the game.

Some fans online did say that they felt matchmaking would lead to poor raid experiences, but that sentiment was often countered by other people saying they’d at least have appreciated the option to matchmake with strangers in lieu of manually assembling a raid crew.

“You might just think it’s lip service, but we definitely do hear a lot of the player’s side of this concern,” Bode said during the stream. “Someone brought up a really good point; it was either on Twitter or Reddit: I don’t really interact with many people in the game, but I really want to be able to play this content’… we want you to be able to play it, too.”

“It’s not something we’re taking lightly,” Banchereau said. “It’s been a big discussion internally, as well, and we know some people like that and some don’t like that.”

Banchereau went on to say that things could change. “We’re happy to keep the conversation going and see how it goes and how people like it and whatever, and how important it is, and then depending on how the conversation goes, we will make adaptations.”