Snakeybus Challenges You to Drive a Bus That Keeps Getting Longer

In Snakeybus, as in life, you are your own greatest enemy. The game, in which you drive a winding, multi-sectioned bus that grows longer every time you drop off passengers, skilfully communicates a busload of resonant platitudes. Don’t look back, lest you collide with your own globe-encircling tail. The only way forward is through—at least, if you’ve got enough boost fuel to rocket over yourself and essentially play jump rope with your own body. And of course, a classic: The past always catches up with you, no matter how far you drive.

Snakeybus is, at its core, a simple game. Though snake-like in form, your bus is more like a shark: it has to keep moving, or else it dies. In an explosion. Initially, avoiding this grim but inevitable fate is easy. You’ve just got to move your normal-sized bus between crowds of passengers and then ferry them to their destinations. An arrow guides you, like in the Sega classic Crazy Taxi.

But then, as soon as you drop people off, your bus gains more segments, 16 per 100 people. The rest of your bus is still relatively easy to avoid as long as you don’t decide to drive in loop-de-loops. Within five minutes or so, though, you’ll likely be dragging around a caboose of over 200 bus segments. This, as you can imagine, is a teensy bit unwieldy.

Levels are set in places such as Paris, in a suburb, or a rotating tube world where up and down no longer exist. Your goal in each progressively more outlandish level is to grow your bus as long as possible while avoiding the greatest obstacle of all: yourself. Snakeybus is a lot like its namesake, retro classic Snake, except you’re a Cronenbergian body horror bus. Also, you can jump. If you hit the spacebar, you briefly rocket into the air. Your other sections follow suit. It’s a limited resource, so you’ve got to deploy it strategically—say, when you’re milliseconds away from crashing into your millipede-like midsection and have no other choice. The cumulative effect of all this is that whatever level you’re on quickly becomes a tangled pretzel mess of your parts. Like this: 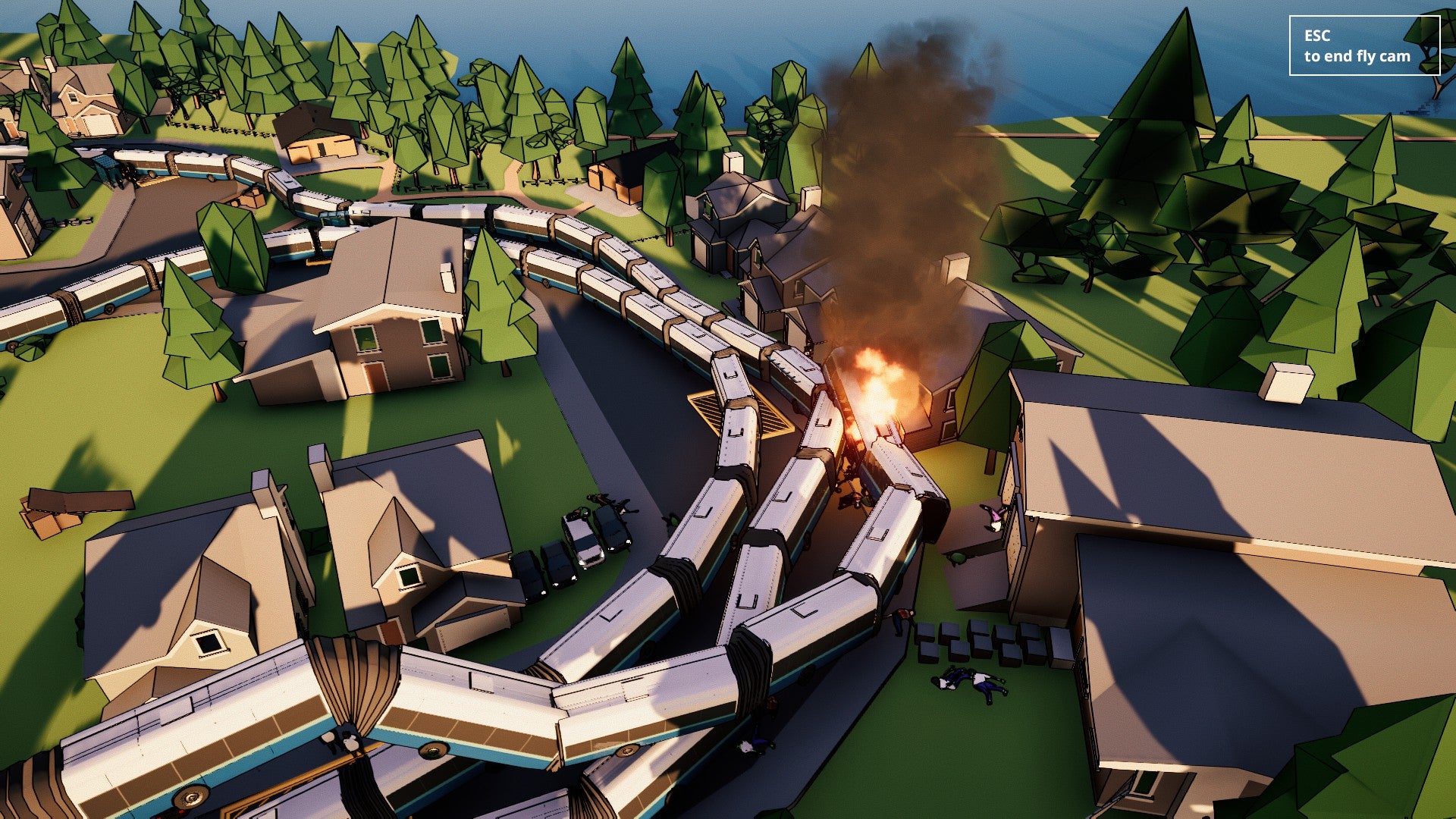 Some sections are running tandem to each other in different directions, others are leaping over each other. Tiny people are ragdolling out onto the street. I get anxiety just looking at it.

Despite all that, Snakeybus is an oddly soothing game. The art style is clean and uncluttered, and the soundtrack is just a rotating selection of songs that feel like they were ripped from one of those “Chill Anime Beats To Study/Relax To” YouTube channels. It’s easy to get into a rhythm with the game and just zone out. When you crash, the game also gives you the option to man a camera and surveil your own coiled mess of a wreck, which is a nice touch. 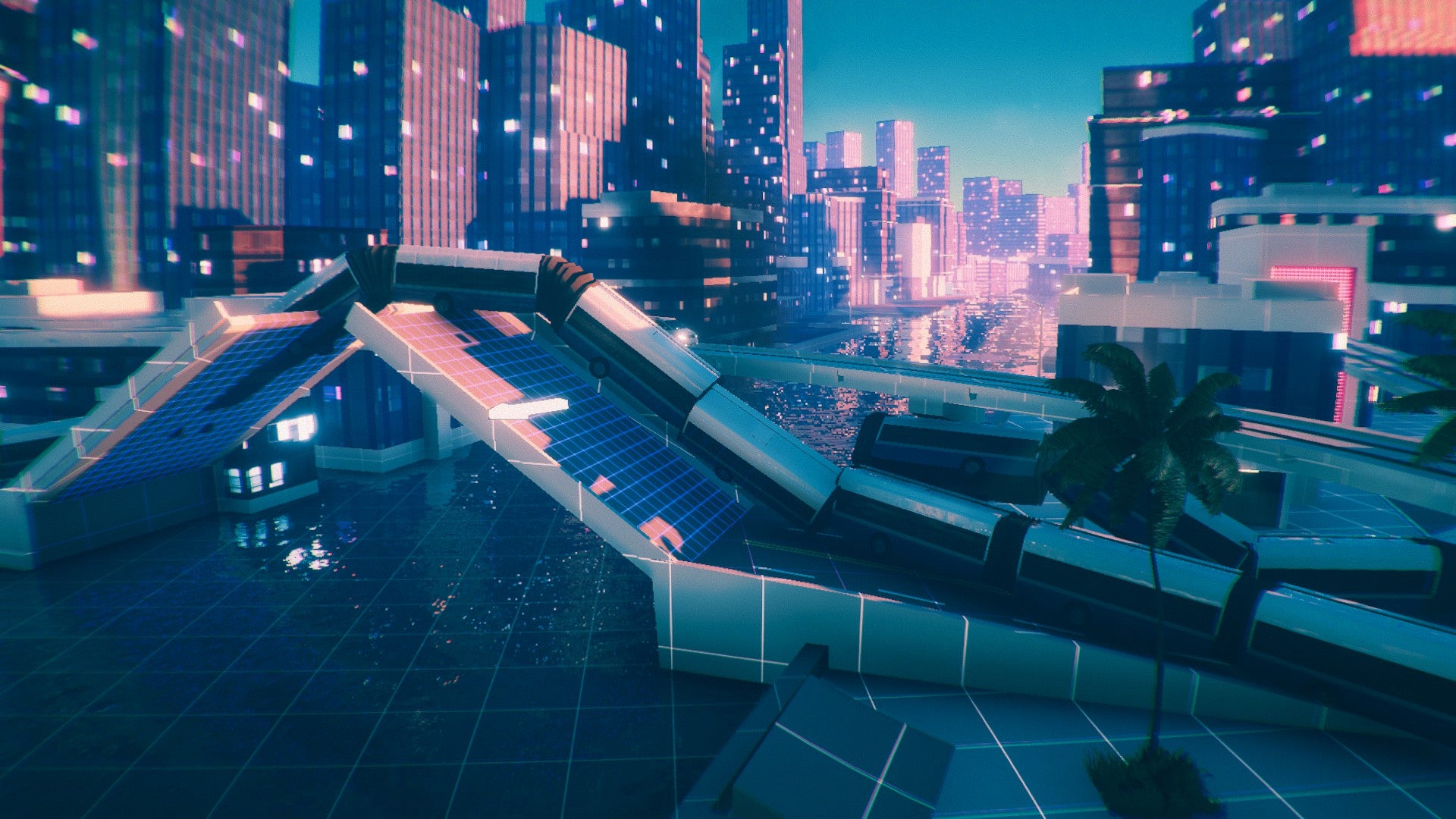 Unfortunately, there’s not all that much to the game. You unlock new levels by playing previous levels a certain number of times, but otherwise, there’s little in the way of tangible progression. You can try to dominate the leaderboards, but beyond that, Snakeybus functions more as a briefly amusing novelty than a capital-E Experience. That’s fine; I think the world is badly in need of more short, confident games, as opposed to more 30- to 100-hour opuses.

I played Snakeybus for a hair under two hours yesterday evening, and I’m just about ready to move on. Perhaps that’s Snakeybus’ greatest lesson of all: Nothing good lasts forever. Not even infinitely expanding buses.