One Night in Darkwood Will Ruin Forests For You

“Respect the woods,” Darkwood cautions you before you start playing for the first time. It’s part of a warning that mostly uses more practical language, letting players know that they’re about to play a “challenging” game, and that they “will not be led by the hand.” It’s a single evocative line in an otherwise perfunctory note. Respect the woods. What a perfect little warning. What a classic way to start a horror story: with a single rule that I have no choice but to violate.

Initially released in 2017 after a three-year early access period, Darkwood makes the leap over to consoles this week with ports to PlayStation 4, Xbox One, and Nintendo Switch. In the game, you play as a man who wakes up deep in the woods of Soviet-era Eastern Europe, which have grown wild and twisted by supernatural forces, swallowing up everything within. If there’s a way out, you have to find it, but first you have to survive. 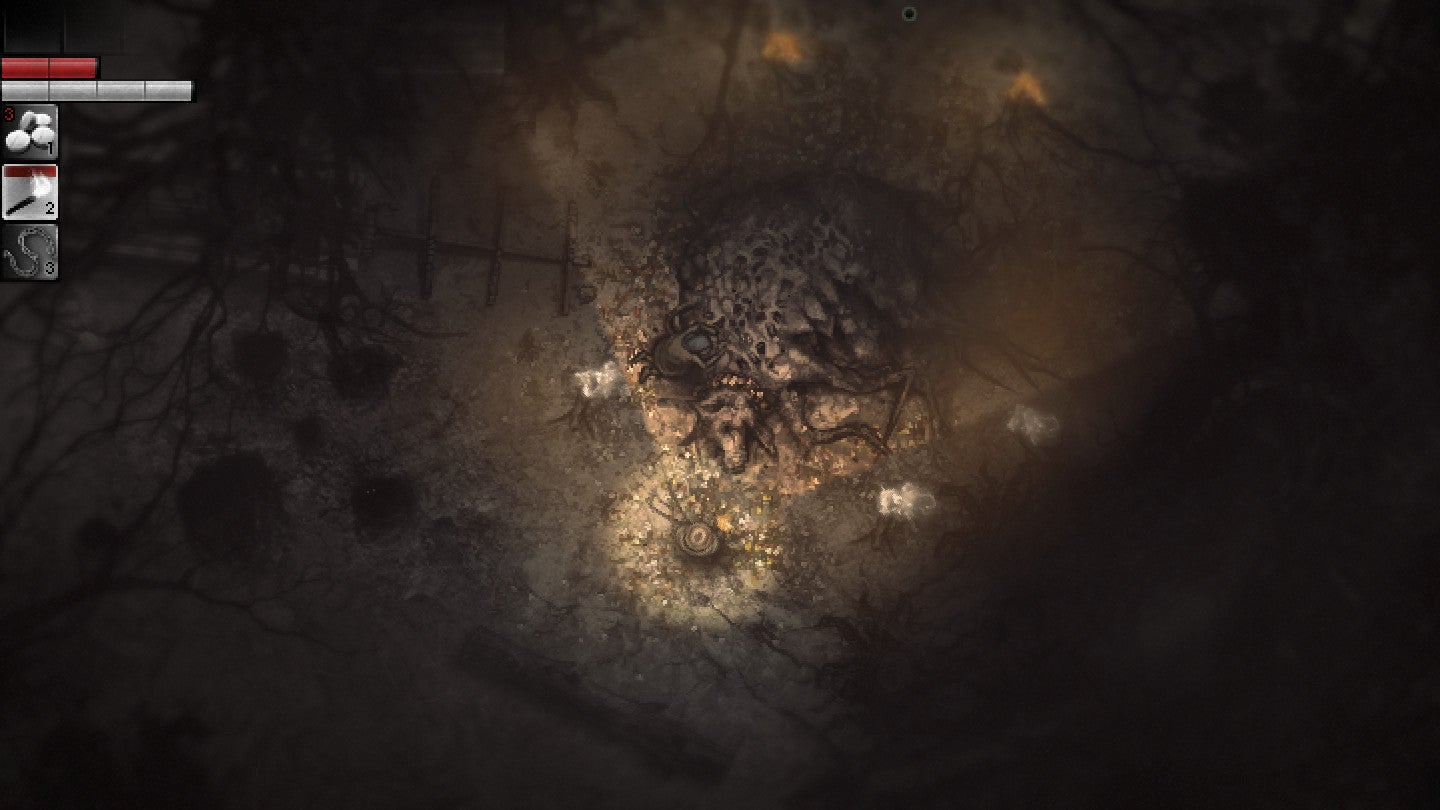 To do that, you’ll have to make the best of the ramshackle hideout you wake up in. You’ll scrounge for resources like wood planks, rags, and gasoline, craft them into makeshift weapons, barricade doors and windows, get generators running, and prepare for the night, where you have no option but to hide indoors and fend off anything that gets inside. Survive until morning, and you do it all over again—except maybe this time, you’ll get to explore a little farther, perhaps find a little more. Or maybe you’ll get swallowed up by something horrifying.

When it was first announced in 2013, Darkwood was unusual for being a 2D horror game with a top-down perspective, bundled with a lot of ideas that were exciting at the time: procedural generation, survival mechanics, and a distinct art style. Those things are all still there and part of its appeal, but after six years of other games that have embraced those features, they’re also the stalest part of Darkwood. After a gripping, linear prologue, the game opens up to become a more traditional survival game where the tension mostly comes from the risk and reward of venturing out into the unknown in the hopes of finding new, interesting things.

It’s fortunate, then, that there are a lot of inexplicable, unsettling things to find in Darkwood. Like strange humanoid creatures worshipping a glowing stone. Or a man with a wolf’s head that is open to talking and trading with you, even if he regards you with considerable disdain. Or that one night, when I heard a knock on my door and found an invitation that told me to go to a location on the map the next day. I went, and found a wedding celebration full of ghosts—ghosts that had been waiting for me.

These are incredible moments, brought to vivid life by Darkwood’s distinct animation style. The way characters move feels earthy and full of weight, as if they were animated by hand with heavy pencils. It makes you think of Ralph Bakshi films and illustrations in very old books. Which is fitting, because Darkwood feels like a rumination on the dark and macabre folklore that forms the basis of fairy tales. Stories about simple things in the real world that scare us—the woods, wolves, shadows twisting in the dim light—given strange and deadly life.

If there’s a drawback to all this, it’s that Darkwood’s structure can make it terribly slow at times. Hiding really is the only real option you have at night, and in the early stages of the game that means for every 30 or so minutes you spend exploring, you’re going to spend about five minutes doing more or less nothing while you wait for night to pass. The game mitigates this a bit by having some sort of haunting trigger in your hideout most nights, and later on enemies get more aggressive about breaking in, but still, hunkering down is a great way to kill momentum, as is scrounging for materials to craft a torch in order to go check out one of the more pitch-black areas.

But based on a few hours with the game’s PlayStation 4 port, Darkwood does enough right to suck me in and accept the slow pace as an occupational hazard. So much of this game breathes slowly—the way the trees above you appear to throb, or fungi seem to audibly quiver and inhale, never really moving but not quite static. Most life moves slowly, outside of the clumsy perception of humans. The forests of Darkwood are here to remind you of that life, and how deadly it is. Respect the woods.