Fallout 76’s world is lonely. Despite being a multiplayer game, it hosts just a couple dozen people around a sprawling map in any session you play. Other Fallout games might have a lot of computer-controlled civilians to chat with. Not this one. All of the non-player characters died long ago, or mutated beyond recognition. This limits the game’s drama, but the more I play Fallout 76 the more I’ve come to appreciate what it gains from being so empty.

I had this epiphany thanks to the game’s newest quest, Bucket List, which adds a new playable object to the game: a film-based camera. This is distinct from the game’s photo mode, which requires players to open a separate menu and temporarily disables their character. The new camera, a ProSnap Deluxe, lets you capture moments with the ease of zooming down the sights on a gun, one of the most natural instincts in any shooter. Ever since getting the camera I’ve been eagerly snapping pics. 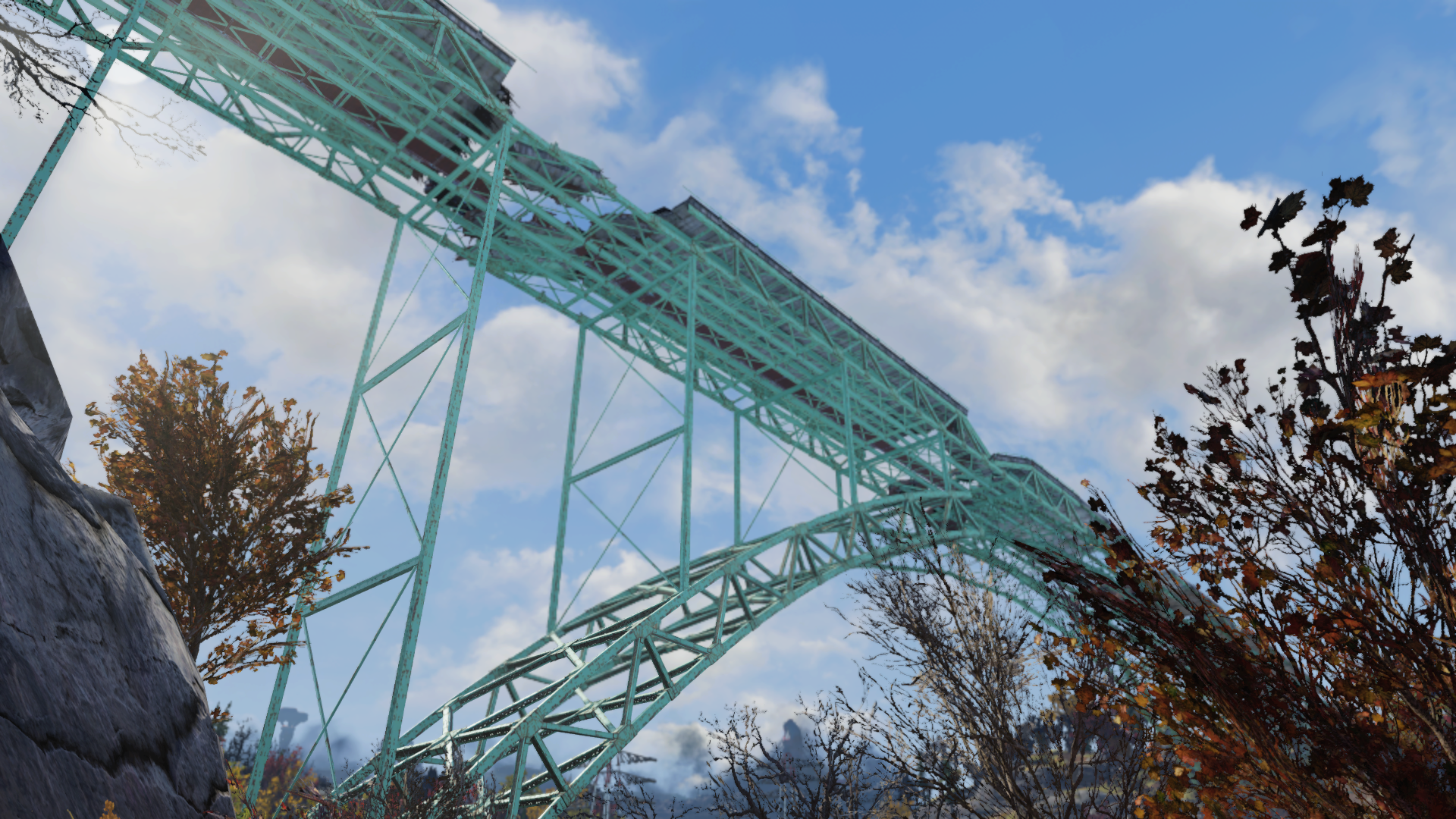 To begin the quest you first have to find the corpse of a tourist, one which wasn’t in the game prior to last week’s update but now randomly spawns at any number of locations across the world. I found mine after climbing up through the Landview Lighthouse. Looting a skeleton draped across the wrought iron railing at the top I learned it belonged to Anne Litzinger, a university student who moved from San Francisco to go to school in West Virginia and didn’t like it at first. “I thought this place was antiquated, filled with ignorant hillbillies. I hated it,” she says in a holotape. “Eventually, I guess I got over myself. It turns out, people are people. Brains aren’t regional and our birthplace doesn’t define us. I decided that once I graduated, I’d really explore West Virginia.”

Even though Fallout 76’s world doesn’t have living non-player characters, their ghosts continue to haunt the world, imbuing it with low key melancholy that makes it feel like one of the most relatable in the series. As Litzinger tried to mine through Appalachia’s cultural and architectural heritage the bombs fell. Her sightseeing list became a bucket list instead, knowing the radiation would kill her before she could finish it. She asks that whoever finds her body does so for her.

One of the training barracks at Camp McClintock.

The cooling towers at the Poseidon Energy Plant.

A nuclear explosion at the Whitespring Resort.

The Whitespring Resort during a nuclear strike event.

It’s not enough to loot Anne’s corpse and start taking pictures of the locations that remain on her list. You first have to repair her broken camera and make some film for it. I was missing some of the aluminium and crystal necessary to do so first before going back to my camp I made a detour into the Morgantown high school. The cafeteria pantry is full of cans and the classroom has microscopes, both of which could be broken down into the ingredients I needed. I couldn’t help but think about the students told to duck and cover under their desks when the alarms went off as I walk the hallway of broken lockers.

One of the places on Anne’s list is the Red Rocket Mega Stop, a 1950s-style petrol station and diner for holidaymakers coming in off the highway. Another is the Pumpkin house, an old Victorian home surrounded by jack ‘o lanterns where a robot programmed to harvest the orange gourds continues to do so in perpetuity. It’s inspired by a real world location in West Virginia where people carve and display thousands of pumpkins every year. 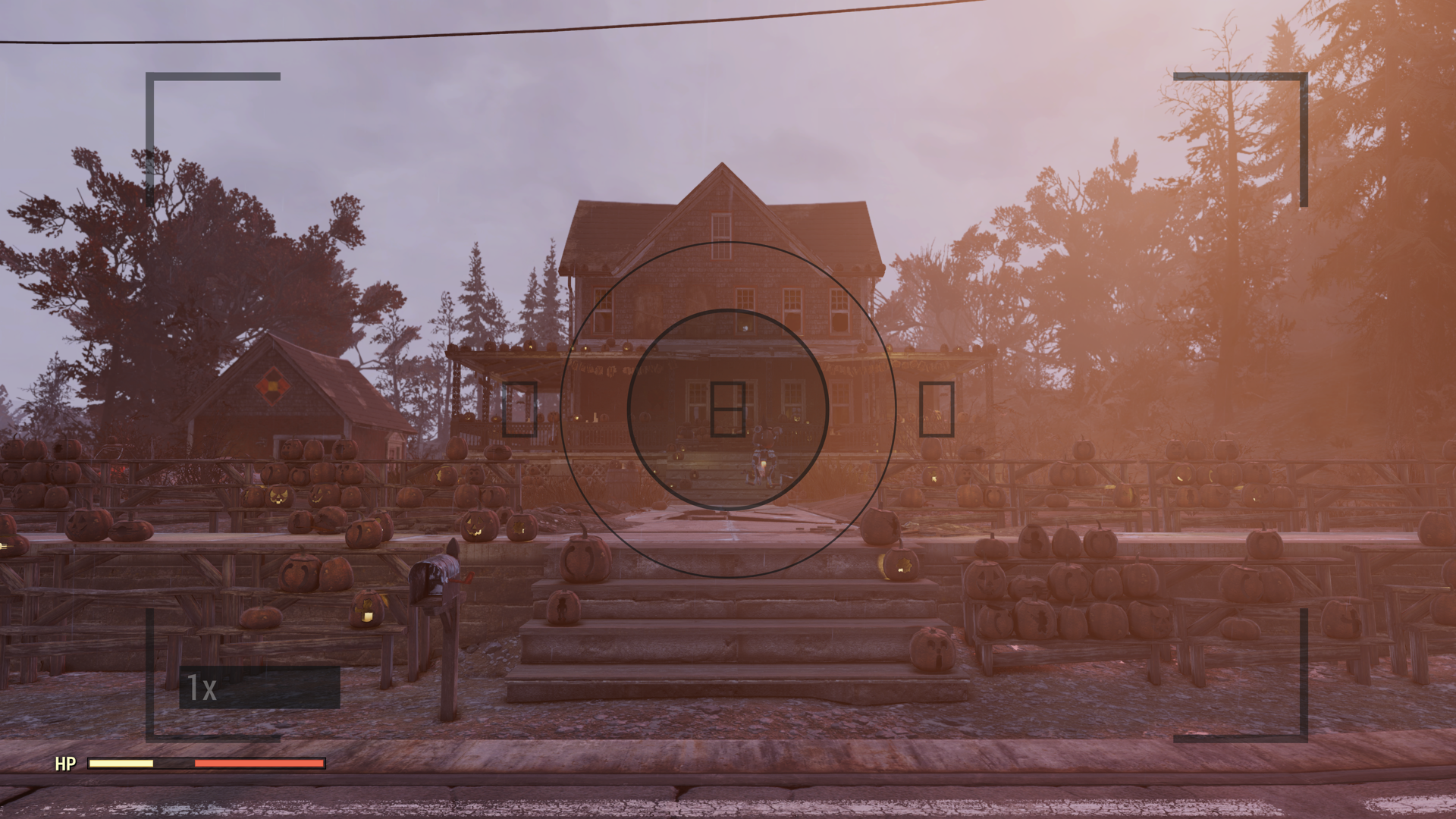 At the end of the quest the Fallout 76 gods dump a random legendary weapon and an assortment of other lesser loot directly into your inventory for your trouble, since neither Anne nor anyone else is alive to give it to you.

Fallout 76’s landscape is dotted with so many strange, decaying monuments to space age Americana that I can’t help but marvel at them, especially when one unexpectedly catches my eye as it peeks out over a tree line or from around the side of a mountain range. But some part of me also feels compelled to take pictures to document the beautiful parts of a disappointing game so many people will never get to see. It’s a sentiment that’s also subtly reflected in the Bucket List.

Games fit into the various nooks and crannies of our lives in all different ways, and where Fallout 76 failed as an ambitious new type of story-driven multiplayer sandbox, it’s performed admirably as a destination for virtual camping trips and strange archaeological hikes. I’ve come to fall in love with the sounds and sights of Fallout 76’s post-apocalyptic Appalachia in the dozens of hours I’ve spent combing through it. Players might never be able to rebuild it as Bethesda once suggested, but even as a graveyard for the victims of a nuclear war it’s the one I keep returning to.