Dragon Age: Inquisition Let Me Be a Hot Mess (NSFW)

By Kate Gray on at

I think I’m bad at role-playing games. I’m far too impatient, too lusty, too easily distracted. I usually leave a trail of dead party members behind me because I keep missing those five-second side-conversations earlier in the game that somehow butterfly-effect themselves into someone dying.

I lost Lydia somewhere in a Skyrim dungeon, and she was murdered by elder tech while I was off looting. My boyfriend refuses to play Divinity: Original Sin 2 with me because I keep trying to pickpocket people, and then we have to fight twenty angry guards, and when I’m not pickpocketing I’m running around accidentally triggering important quests while looking for treasure. But playing Dragon Age: Inquisition, I felt like the game was designed around my awkward clumsiness. Here is the tale of how I ended up with three love interests. 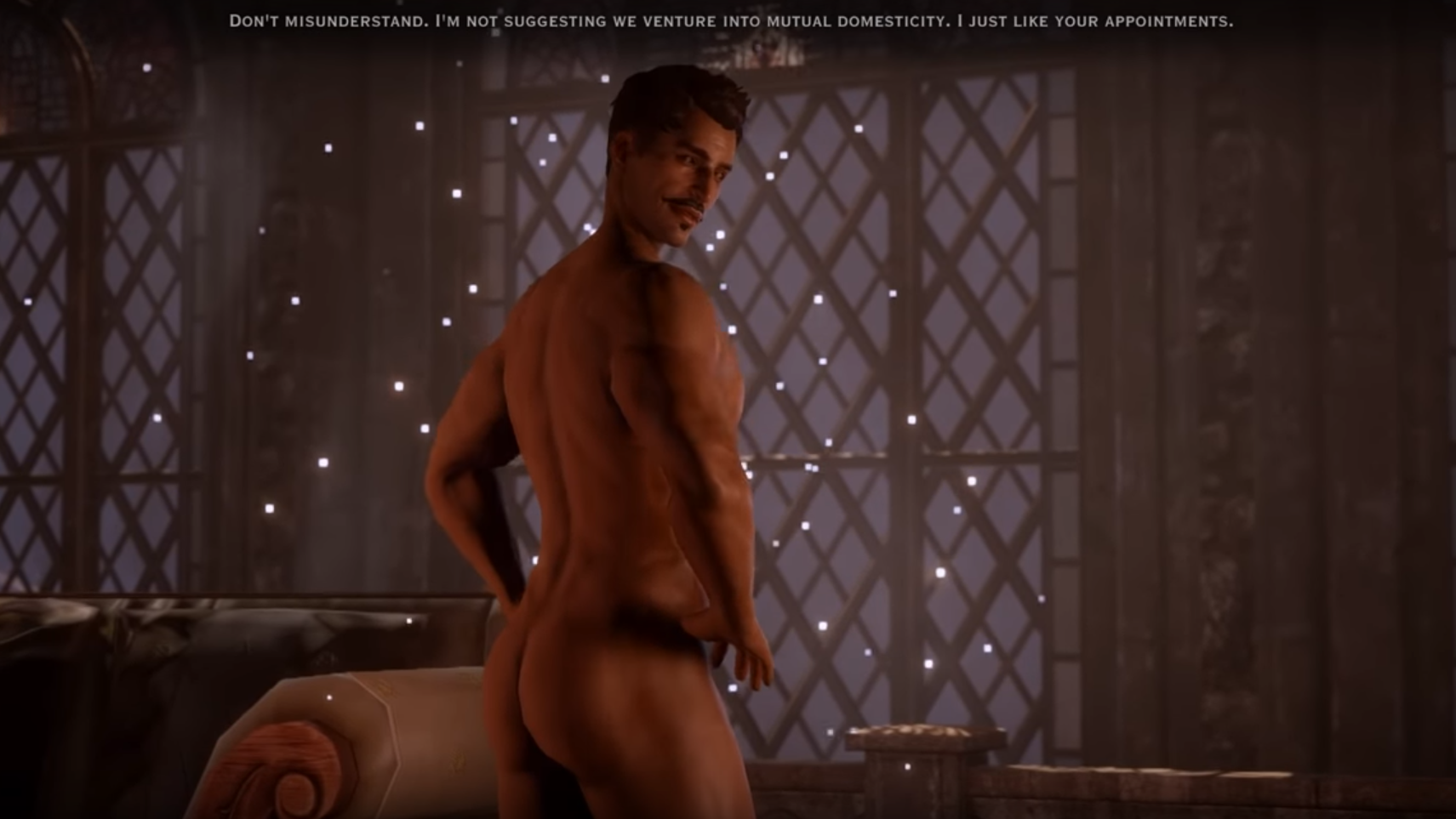 It all started with Dorian. He’s a sassy arsehole, and I love him. Something about his wit, sarcasm, and stupid tiny moustache drew me to him, and in typical RPG style, I ignored all other characters for every chance I could get to trigger new dialogue with him. It wasn’t long before he took me on his personal quest, during which I was sure he would tell me that we were to be married at once, or whatever the Dragon Age equivalent was.

But the personal quest turned out to be a mission to confront his father about his attempt to use blood magic to suppress Dorian’s homosexuality. Oh. Oh. 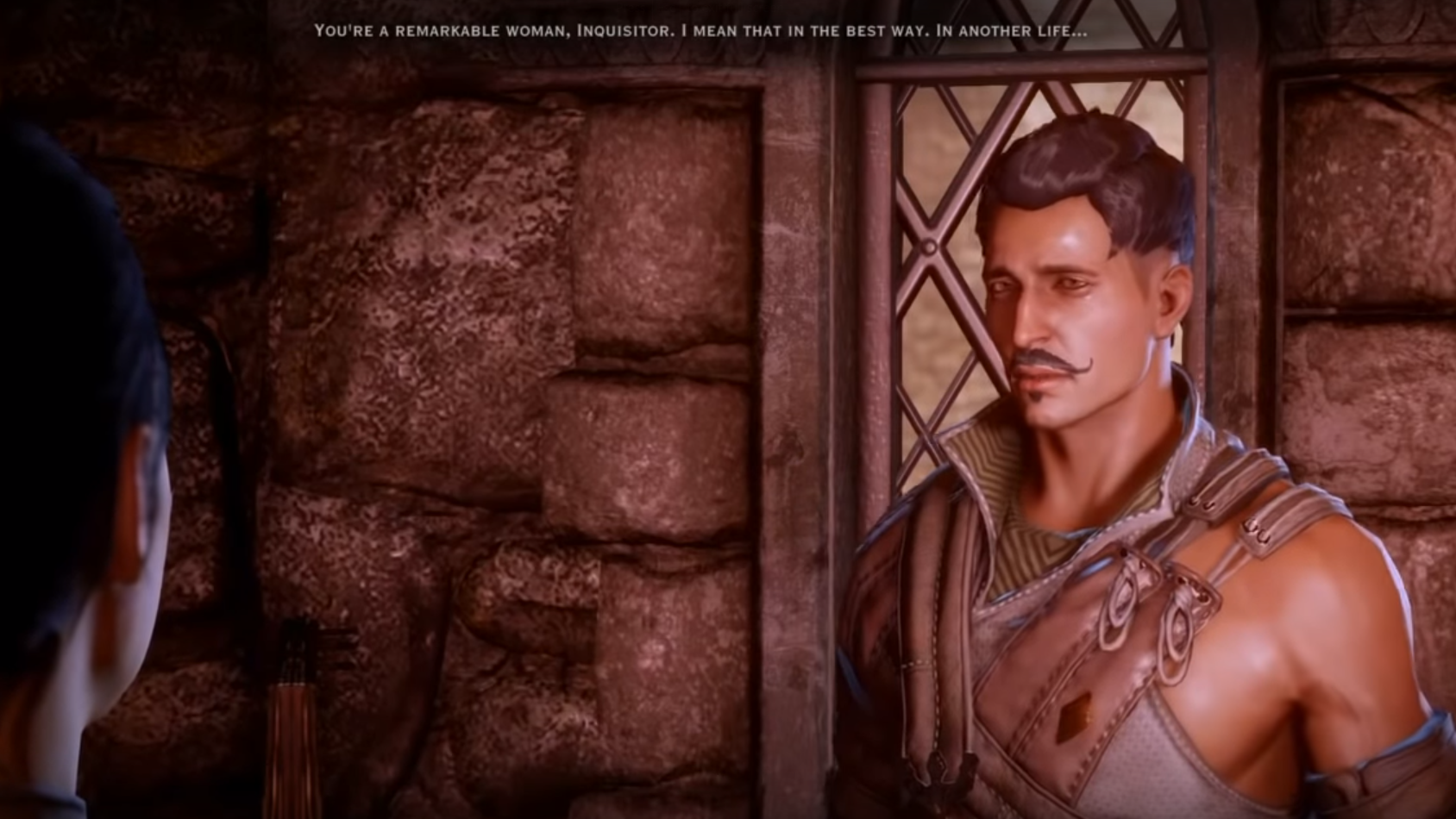 I went to the library and had a tough conversation with Dorian, asking him what he had meant by all that flirting if he wasn’t interested in me. Not only did he acknowledge that it was misleading, he apologised for toying with my heart, and offered to never flirt with me again if it was too much for me—which was a moment in and of itself, because, wait, had the game expected me to do this? Was this all part of writer David Gaider’s plan? Damn him! Damn that sexy moustache! But I moved on, satisfied with the realness of our conversation and with Dorian’s agency as a non-playable character who was only interested in men. 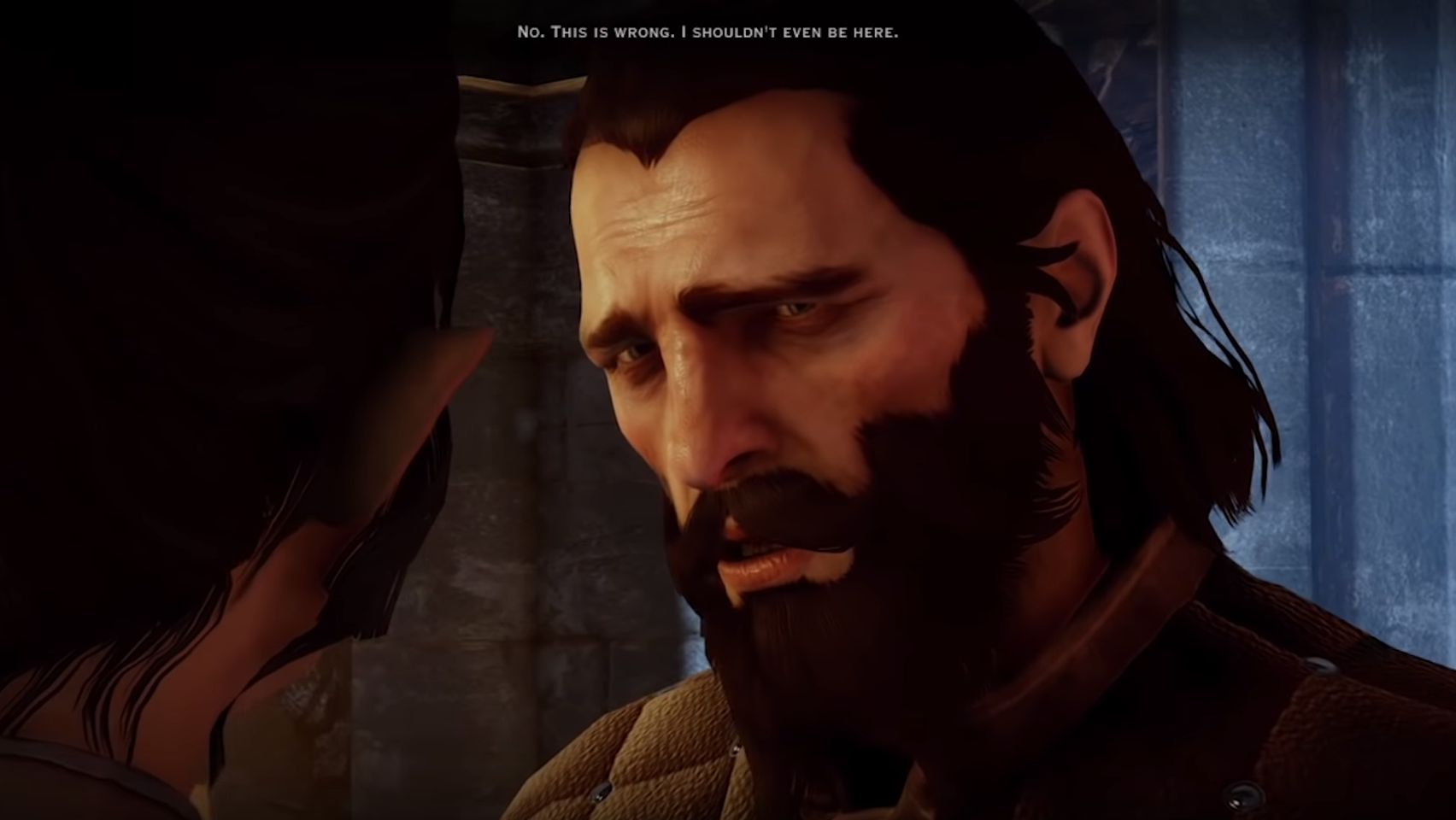 I dallied for a while with Blackwall, a man with a stupid beard, a gravelly monotone, and a distinct lack of personality (apologies in advance to all Blackwall fans). When I say I dallied, I mean once. Precisely once. I chose one flirty dialogue choice out of curiosity, and it wasn’t until four painful romantic cutscenes later that I was able to tell him to take his beard and fuck off back to the stables. He was convinced we were very much in love. From my perspective, it was more like a clingy guy that thinks one date is a tangible commitment. 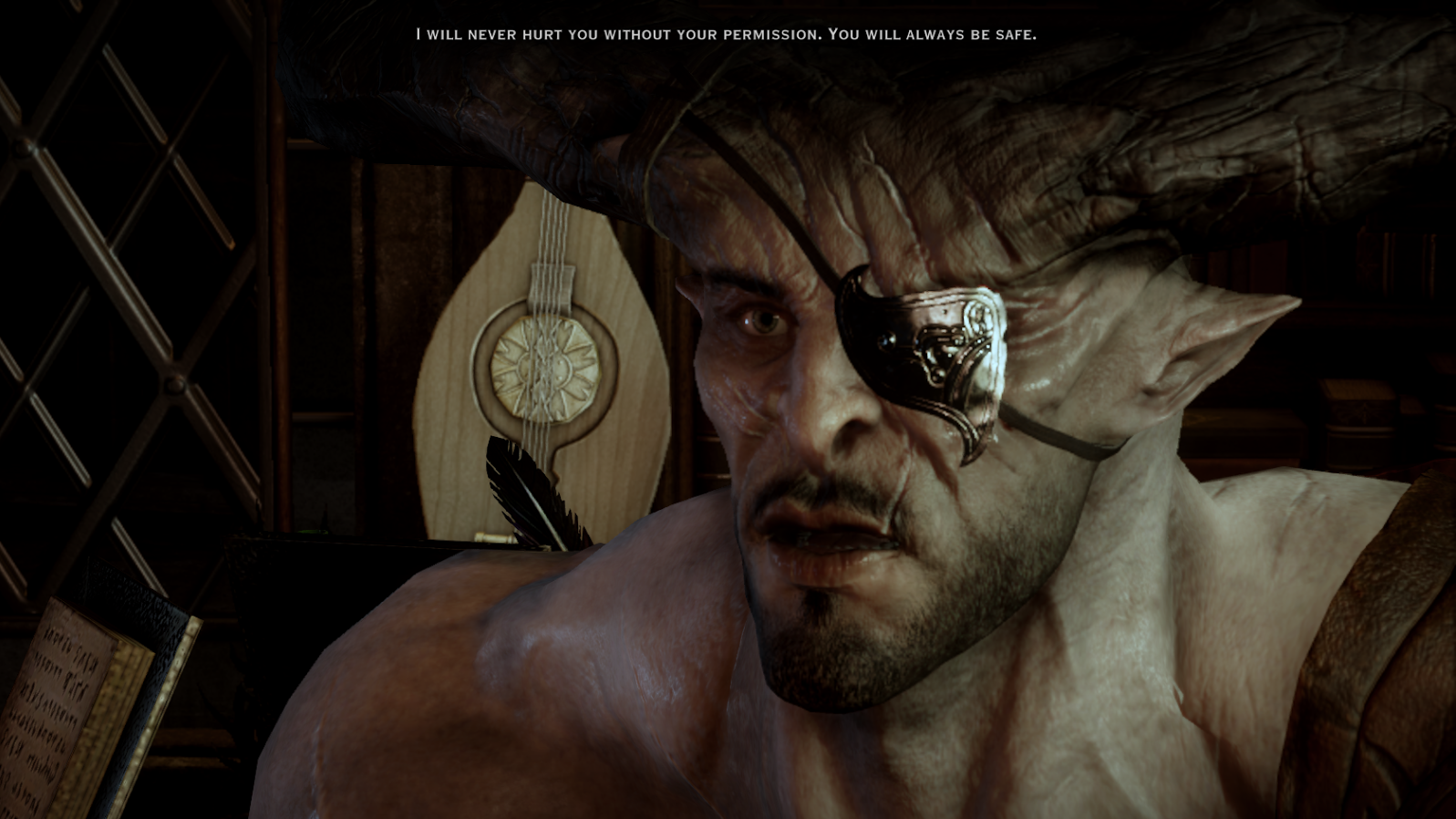 (Apparently, if you don’t date Iron Bull or Dorian, they can end up together. Dragon Age: Inquisition did a lot for me, but it didn’t let me be the mayonnaise in that man-sandwich, so if you’ll excuse me, I’m off to find some fan-fiction.) 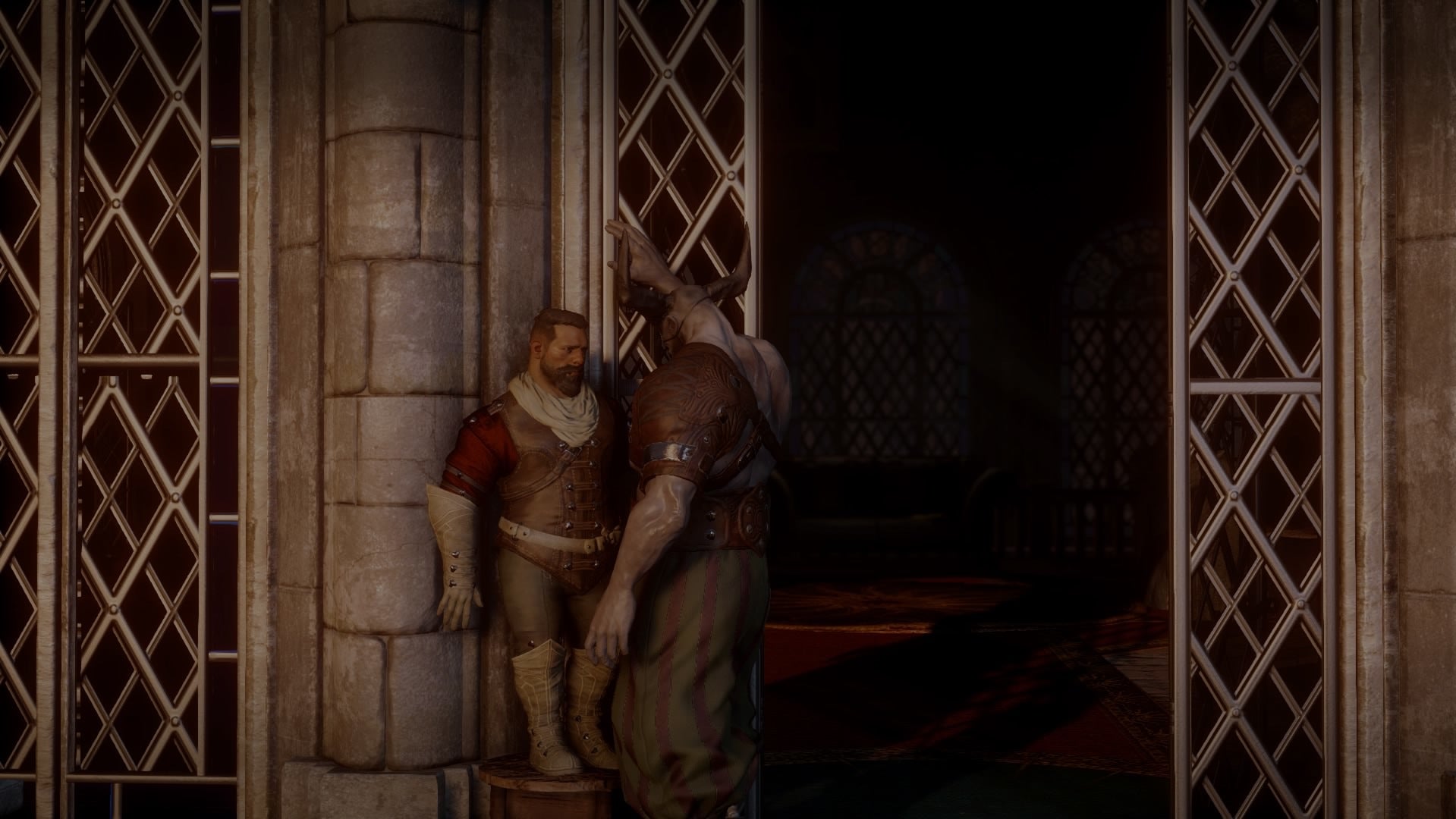 It’s been said a thousand times before about Dragon Age: Inquisition, but it sure is refreshing to play a AAA game that treats sex not like a win-state, nor a titillating cutscene, but as a living part of an ever-changing relationship. We don’t have to treat sex like something divorced from the narrative of the game, nor do we have to act like it only exists for the player’s enjoyment. Good sex in games, as rare as it is, should be about sex in context, with all the dynamics of power and personality that come with it. Giving characters like Dorian the agency to reject people is just as important as giving the player and the player-character the agency to consent, and I’d love to see more of that in the future.

Not to mention that sex is a great opportunity for silly jokes that show a different side of characters, like the sex scene between the Inquisitor and Sera, who falls off the bed laughing at the Inquisitor’s failed attempt to shave initials into her pubes. And why not! It’s a tender, heartwarming scene that lets us take a break from battles and misery.

I am eternally grateful that Dragon Age: Inquisition let me roleplay as the hot mess I am, with all the relationship fuck-ups and responses that acknowledged that everyone, from Dorian and Blackwall to Sera and Iron Bull, was fully aware of how much of a romantic dumbass I was.