Narratively, War Of The Spark couldn’t have arrived at a more opportune cultural moment. As the current chapters of the Marvel Cinematic Universe and Game of Thrones come to a close, Magic’s latest expansion plays with ideas from both. A team of powerful heroes called the Gatewatch battle Nicol Bolas, a powerful Elder Dragon who threatens the multiverse and has raised an undead army to assist him in his quest to become its most powerful being.

While other Magic expansions are themed around a particular magical plane of existence, War of the Spark focuses on the confrontation between the Gatewatch and Bolas, and as a result is full of powerful creatures, big spells, and climactic games that tend to go late. This showdown mentality also factors into the two major mechanics at play in the new set.

The first is called Amass, a spell effect that allows a player to summon a 1/1 zombie army token and then stack on more and more +1/+1 counters every additional time a card with Amass is used. This is Bolas’ army of the undead, and it synergises with existing mechanics like Proliferate, which adds one to all sets of counters someone currently has in play. And because the zombie armies don’t cost black mana to play, they’re available to every deck type, even though Amass is most prevalent in blue, red, and black cards.

Efficiency, getting as much done with as little as possible, is a big virtue in Magic, and Amass leans into that by helping you create an army of creatures while also playing spells that provide other benefits. Aven Eternal is a 3-mana blue card that’s 2/2 with flying and has Amass 1. So in addition to getting you two creatures for the price of one, the second also has the potential to continue growing in power over the course of the game.

Another card, Contentious Plan, is a 2-mana blue card that proliferates and lets you draw a card. This gives it a lot of utility for such a cheap card once you’ve got a few different zombie armies in play. War Of The Spark’s other focus is planeswalkers, the powerful characters who stand separate from the rest of the battlefield and provide more complex and often extremely powerful benefits. Traditionally, planeswalkers have been a rarified Magic mechanic, incentivising players to build entire decks around one specific, very powerful planeswalker card. War of the Spark lowers the barrier to entry by adding weaker planeswalkers at lower rarities. Every booster pack in this set comes with at least one planeswalker, which results in decks where it’s not uncommon to be playing with two or three different planeswalkers at the same time.

Blue Illusionist Jace, founding member of the Gatewatch, is back, this time with a mechanic where the player who uses him automatically wins if it’s their turn and they have no cards left to draw. But there are other planeswalkers like Narset, Parter of Veils, a blue uncommon that prevents opponents from drawing more than one card per turn. Or Ral, Storm Conduit, a blue-red rare who lets you play duplicates of spells and deals damage to the opponent every time you do.

Since there are multiple planeswalkers for every occasion, it means every deck needs a Plan B, C, or even D. There aren’t a ton of cards that facilitate quick, aggressive rush play in War Of The Spark, which means games have time to develop. There’s a big emphasis on being able to close out with big showstoppers like Finale of Devastation, a green sorcery that lets players search their deck for their strongest creature and buff it by a huge amount if they have enough extra mana to spare. And with green planeswalker Nissa, who doubles the mana you get from tapping forests, that’s often the case. 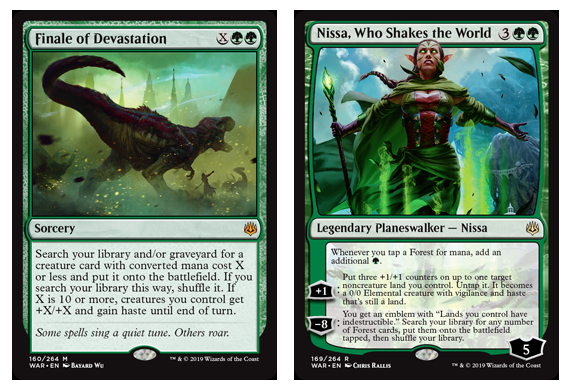 In addition to being a lot of fun so far, especially for people like me who enjoy more chess-like matches that don’t turn completely on someone just happening to get the right card early on, War Of The Spark also highlights some of the major benefits of Arena being digital. While I still prefer to play face-to-face with other people and hear the sound of cards snapping as they’re played from a human hand, there’s a lot of complicated stuff going on in War Of The Spark.

In addition to keeping track of multiple zombie armies with multiple plus-one counters, there are often lots of planeswalkers to manage in addition to the normal minutiae of creature and land management. Many times while playing over the weekend, I was relieved to be able to rely on the game to automatically be doing my upkeep for me rather than have to keep track of it all by myself, or negotiate mental lapses out loud with someone sitting across from me.

I’ve played Magic off and on for decades, but always mostly for fun. War Of The Spark offers a tonne of tools for crafting high-stakes plays, exactly the kind I’m looking for as a chronically lapsed player. Even though Arena hasn’t fully launched yet, it already helps a lot by helping keep so much of the busy work involved in the game from upstaging the grand strategies and high spectacle.