Assassin’s Creed Odyssey’s newest downloadable content, “The Fate of Atlantis,” focuses on the strange and magical. From ancient gods to hidden paradise worlds that may or may not be holographic prisons, “Fate of Atlantis” embraces the more far-out science fiction elements of the franchise. The first episode is a web of scheming alien gods and improv roleplaying that’s finally taking the weirdness of older Assassin’s Creed games and cranking it up to a level it should have reached ages ago.

“The Fate of Atlantis” is split into two stories. In the first, your Eagle Bearer—either Kassandra or Alexios—is pulled into a struggle between warring gods. After receiving a magical staff in the main game, Kassandra (my chosen character) enters into Elysium, a hidden realm in the underwater city of Atlantis, ruled by Persephone. It’s a perfect paradise, perhaps the true afterlife or some type of holographic construct, but a growing rebellion and a contingent of scheming gods, fellow Isu precursors who rules the world before humans, threaten to turn paradise into a warzone. The player needs to decide who to trust in a lengthy campaign that took me around nine hours to complete. It’s robust and far removed from the historical aspects of the series, but that’s a good thing. Assassin’s Creed’s best moments have always been the most experimental.

As Kassandra deals with problems in Elysium, there’s trouble in modern times. Layla Hassan, the protagonist first introduced in Assassin’s Creed Origins, has found what remains of Atlantis. Gifted Kassandra’s magic staff, she is meant to fulfil a prophecy that will seal the fate of Atlantis. All the while, dastardly Templars—forever at war with Layla and her Assassin companions, close in. It’s a return to the real-world setting that many players shirked but which has always been important for the series’ storytelling. Kassandra’s journey into prophecy and intrigue is a counterpart to Layla’s misadventures with the Assassins and Templars.

“Fate of Atlantis” cuts between the two protagonists and uses its science fiction conceit to round out Layla as a character more than ever. It’s the Assassin’s Creed I wanted and got a taste of in the main game. Ubisoft is finally reconstructing the series’ arching plot into something experimental and interesting. For anyone who felt that Odyssey was generic and too removed from the series’ other plots, “Fate of Atlantis” is just what the doctor ordered.

There’s an entirely new area to explore in Fate of Atlantis, far larger than I expected. Elysium has multiple regions to traverse and quester givers to please. There’s not as much side content, but the campaigns length means players will explore the map in great detail. And what a map it is! Odyssey made great use of bright colours and lush scenery to create a beautiful, if embattled, ancient Greece. Elysium dials that up to eleven.

The story in “Fate of Atlantis” stumbles to deliver compelling politicking on par with its world. While the individual motives of characters like Hermes, Persephone, and Hekate create a soap-opera-like story of backstabbing and unrequited love, the broader faction politics stumble. There’s a rebel faction of humans in Elysium who want to overthrow Persephone and escape, but they also have vague grievances against their queen that aren’t well-explained. Fate of Atlantis wants to give players the chance to infiltrate factions, undermine war efforts, and affect the political landscape. The story builds toward revolution but never gives players quite enough roleplaying depth when it comes to faction decisions. Explained succinctly: This could have been mythological New Vegas, but it sure isn’t. 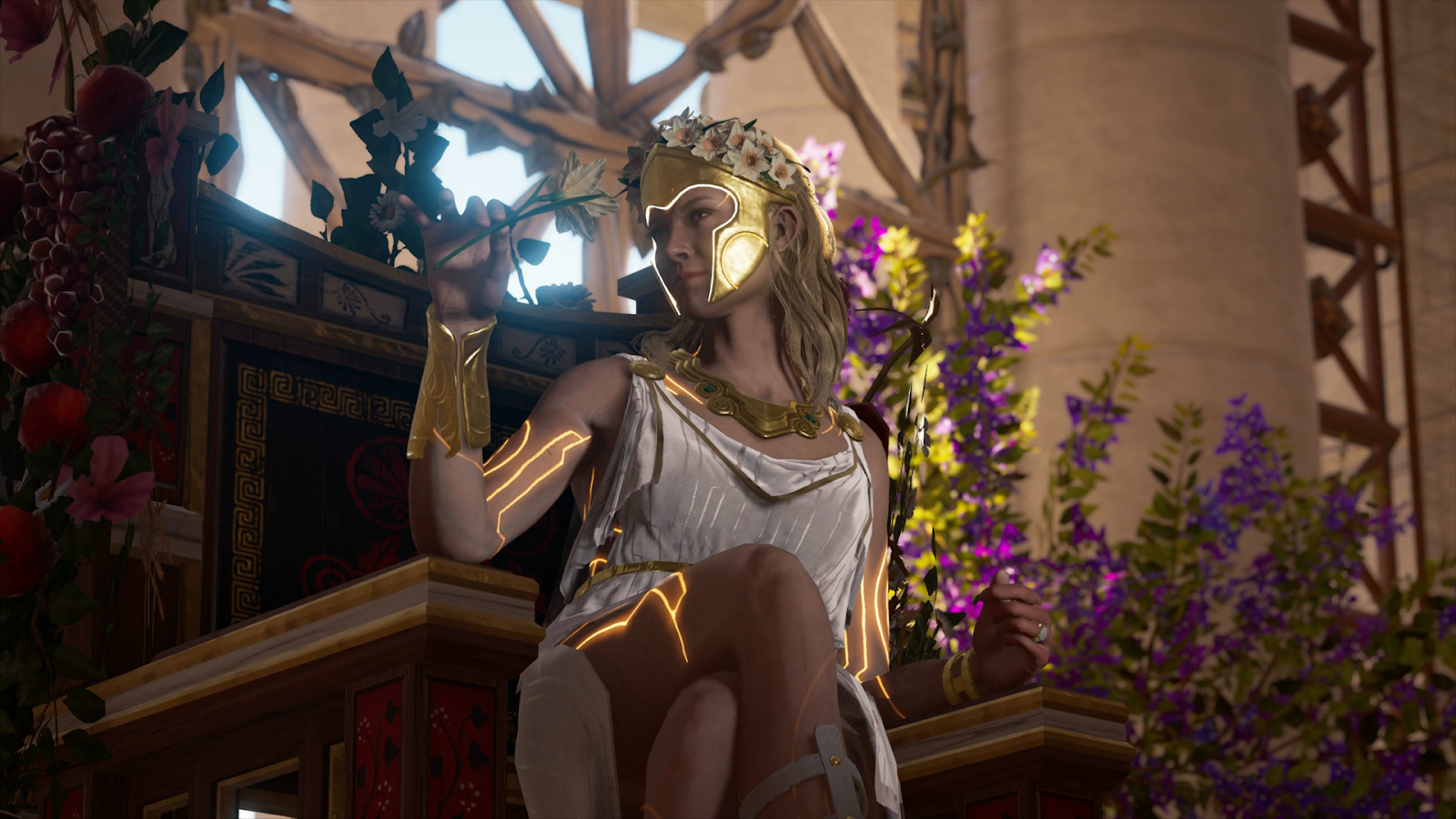 Instead, there’s tonnes of effort to make your individual actions in story missions matter, more so than the main game. In one case, I was told to avoid killing a soldier and to instead use my magic staff to remove their mind control. I spotted a captain in the enemy base I was infiltrating. To traverse a large gap, I used an ability that allows me to teleport to an enemy and immediately assassinate them. It was only then that I realise I’d killed the wrong person. Later on, I met their paramour who was unaware I killed her love. I then brought her a vial of magic water that could wipe her memories and get rid of her lovesickness. When I gave her the water, another character was frustrated because she’d been a useful ally. But then they realised that I’d also killed the person they loved and commented that it might have been for the best.

There are numerous situations like this throughout the story: moments where the actions you take in missions ripple out and have noticeable effects. Choosing the wrong prompts while infiltrating a cult can lead to conflict; disobeying a god can lead to them holding back promised rewards. Sneaking through a mission undetected and avoiding bloodshed builds goodwill with the rebel faction. “Fate of Atlantis”’ lengthy story stumbles sometimes, but I always felt like my decisions were acknowledged. It gave me extra cause to complete optional objectives and take each mission seriously even if I was a bit exhausted by the end. That was probably because my job meant playing it in one sitting, so try not to do that and take some breaks when you can, friends. 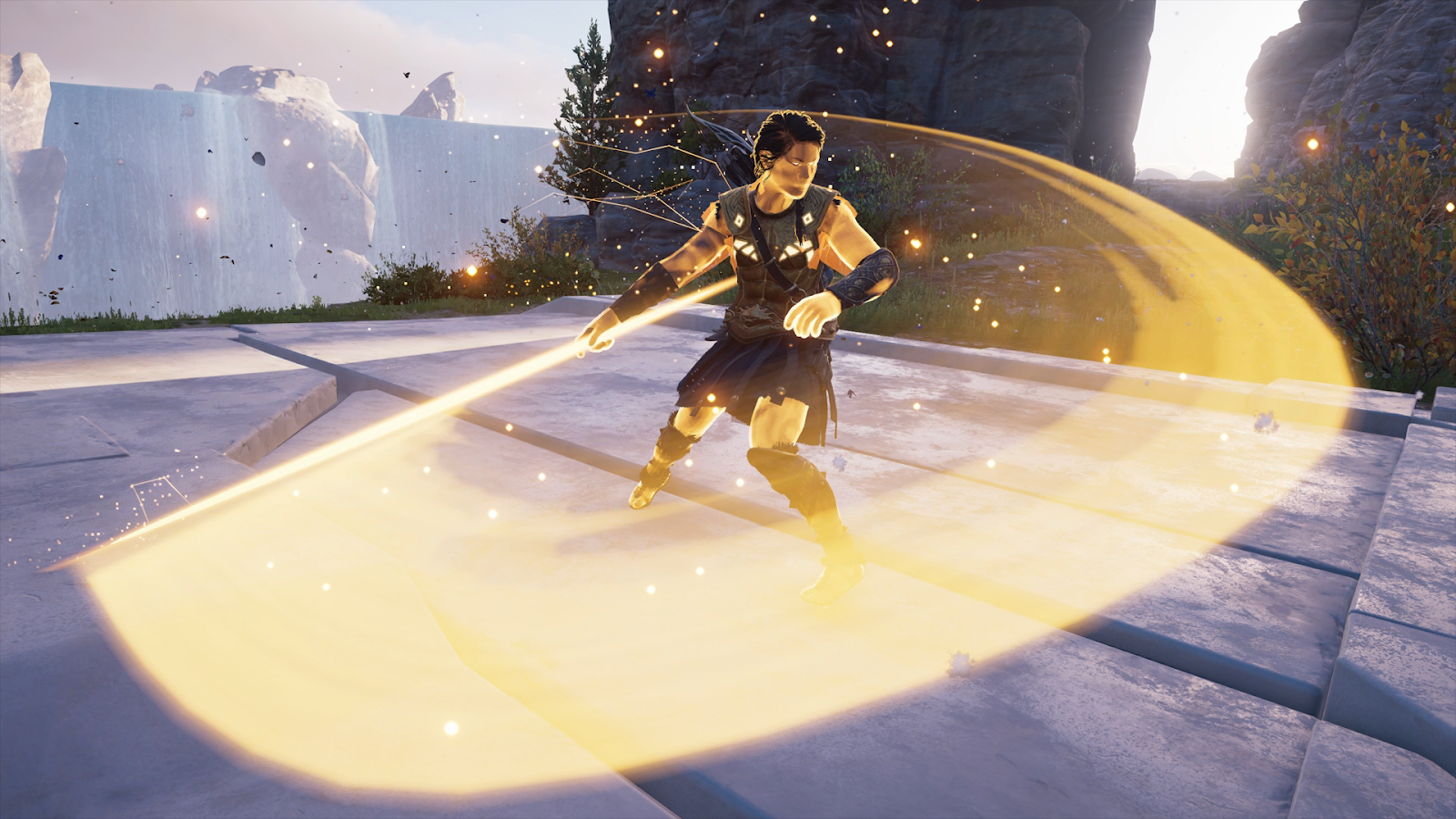 To round out the experience, “Fate of Atlantis” steps up the combat difficulty. The first time I set foot in Elysium and fought Persephone’s troops, I got my arse kicked. These magically enhanced warriors hit hard and have tonnes of skills that can stop you from using special abilities. Magical explosions, fields that drain stamina, and literal laser beams are common. The toughest enemies are Colossi, statues that come to life and teleport around. This is a far cry from previous games. It’s full-blown fantasy combat, and the result are fights that keep players on their toes.

It’s possible to explore the world and unlock new augments for your abilities if you find shrines dedicated to Hermes. Each shrine gives access to magical powers ranging from a literal energy spear that cuts through enemies with ease to a spectral rain of arrows. Odyssey’s main game captured the feeling of being a tough warrior like Xenia, but “Fate of Atlantis” leaps into full-blown demi-god territory. These new powers can sometimes make encounters too easy, particularly the few boss battles dotted throughout the story, but they’re spectacular fun to use.

I’ll admit that I entered into “Fate of Atlantis” with apprehension. The last downloadable content, “Legacy of the First Blade,” started strong and explored the circumstances that would give rise to the Assassin order. But the second episode stumbled by forcing players into a baby-ever-after situation with boring romance options. The final episode had personal stakes but ended with what felt, to me, like a contrived connection to Assassin’s Creed Origins. In a lot of ways, “Legacy of the First Blade” burned me out on Odyssey. The game I loved felt like it suddenly wasn’t for me. “Fate of Atlantis”’ extreme science fiction and connections to the modern-day plot had renewed my excitement

I don’t know where “Fate of Atlantis” will lead in future episodes. I could end up in the underworld faces to face with Hades. I’m almost certainly going to battle Cerberus. The godly intrigue will hopefully give way to a modern-day plot full of twists and turns, one that brings the Assassins and Templars to the forefront again. Whatever the case, “Fate of Atlantis”’ first episode is big, flashy, and completely my brand of bullshit.