In addition to adding a new playable character, the latest Super Smash Bros. Ultimate update also included a creative mode that gives players the ability to make their own elaborate stages. While many have used this new mode to craft all sorts of phallic fighting arenas, a few have lifted their minds out of the gutter long enough to put together similarly silly places to duke it out with Mario and his ever-expanding gang.

Some of the earliest creations have predictably focused on recognisable memes and other internet-based humour. This first stage brings the oft-parodied “Steamed Hams” bit from The Simpsons to the world of Super Smash Bros. Ultimate, complete with the requisite Mii versions of Principal Skinner and Super Nintendo Chalmers.

i'm so sorry i've brought this upon you all pic.twitter.com/DtPw5EnuRi

Tails might not have followed Sonic to the Super Smash Bros. roster, but he can now make an appearance with this reference to the long-running absurdist webcomic “Tails Gets Trolled.”

The reference in this next one was completely new to me, but apparently, there’s a hot new meme going around that depicts a cute little puppy dog offering the viewer a joint. I look forward to The Kids telling me this is already super old and that I’m out of my element. Anyways, here it is in Ultimate.

And what kind of roundup would this be without someone’s take on Ctrl+Alt+Del’s infamous “Loss” comic. Hell, why settle for one when you can have a dozen? 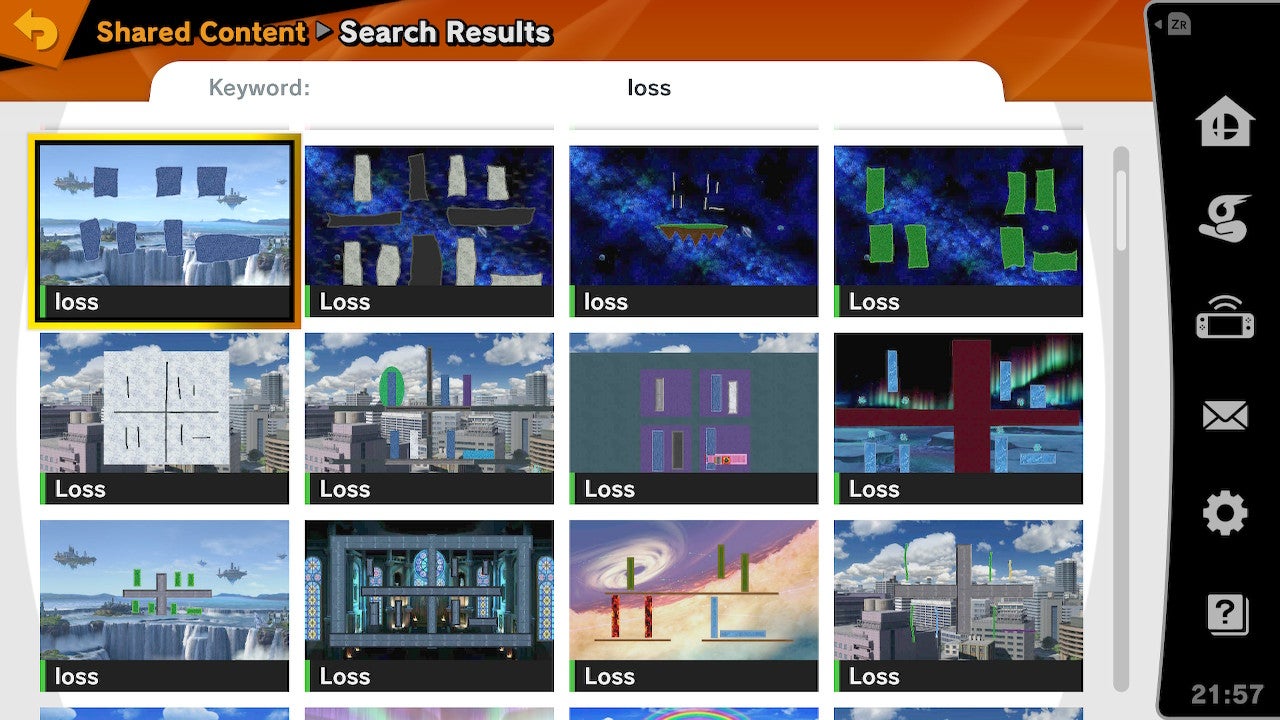 As you would expect, many stages are built to be references to other games. Anyone else feel compelled to belt out Norihiko Hibino’s beautiful “Snake Eater” all of a sudden?

The Legend of Zelda: Ocarina of Time’s Temple of Time is perhaps one of the most iconic areas in video game history, and it’s finally been made part of the Super Smash Bros. universe, thanks to this ingenious fan.

#SmashBros #NintendoSwitch I tried to make The Temple of Time in stage builder :D this is how it came out pic.twitter.com/VDRsLXKfTb

The same creator also added a bit of Melee flair to Ultimate with an ode to the former’s “Break the Targets” mini-game. Can you beat their record?

#SmashBros This is Target Smash specifically for Mario. Blue is where you start, White is for your Player2. My record is 21 seconds pic.twitter.com/GuSoG3Ztd3

Rivals of Aether is a 2D brawler that takes a tonne of inspiration from the Super Smash Bros. series, and multiple fans have recreated one of its most popular stages, Air Armada, much to the delight of developer Dan Fornace.

Look at all these Air Armadas I found in Smash Ultimate. You guys are pretty cool. pic.twitter.com/Icd2h4P8Oe

The references aren’t confined to video games, either. With Avengers: Endgame coming out next week, one Smash player took it upon themselves to make a pretty decent replica of Avengers Tower.

You can see @RobertDowneyJr flying in the background.

Will be making more. Find Ewok007 on Smash World for the follow! pic.twitter.com/BBE4iUpkxu

Super Smash Bros. isn’t a series known for its existential dread, but now players can ponder the potential of human evolution while beating on their friends, thanks to this Neon Genesis Evangelion stage.

Anyone who has spent an excessive amount of time waiting for their DVD player’s logo to hit perfectly in the corner might be able to find some sort of sick enjoyment on this stage.

Of course, not every custom stage being made in Super Smash Bros. Ultimate is a big joke. This one, for example, seems perfect for competitive play.

And I’m sure we’ll see this one on display at Evo later this year.

thank god i can force my friends into this again pic.twitter.com/q9MVqleafQ

Super Smash Bros. Ultimate players are slowly starting to learn the ins and outs of what’s possible with the stage creator. Various stage components and hazards can be used to allow characters to pull off complex combos that wouldn’t otherwise be possible.

Like with similar customisation options in other games, Super Smash Bros. Ultimate’s stage building mode has a tonne of potential. Memes are fun and all, but history tells us that folks have only started to scratch the surface of what’s possible. We’ll probably never see any of these player-made stages considered legal at tournaments, but that’s the beauty of Super Smash Bros.: it’s just as fun to play with a few buddies on the couch. I can’t wait to see what else the community’s most creative minds are able to come up with to torment my friends and family.

Oh, and yes, you can finally pet a dog... with a little work.

With some creative use of the stage builder, you can pet the dog in Super Smash Bros. Ultimate pic.twitter.com/Wg40LAOmaS

Ian Walker loves fighting games and loves writing about them even more. You can find him on Twitter at @iantothemax.