The mission is fine. Not great, but fine. It’s basically that scene at the start of an Avengers movie where all the heroes work together to beat up a bunch of scrubs who normally wouldn’t even warrant a stern look from Nick Fury, but the filmmakers have to show that The Gang’s All Here and set up the actual plot. It’s time for Hulk to grab a normal human man and peel him like a banana or something. The problem with Storm Rising is that it ends after that part. Tracer, Winston, Mercy, and Genji run through a level battering the same selection of no-name soldiers from last year’s co-op mission. They’re pursuing a rich Omnic—a humanoid robot, basically—named Maximilien, and then we get a cutscene that introduces some menacing new robo-villain. That’s it. It feels like a setup for something. This has led to disappointment among Overwatch fans, who expected more after a year between co-op missions. 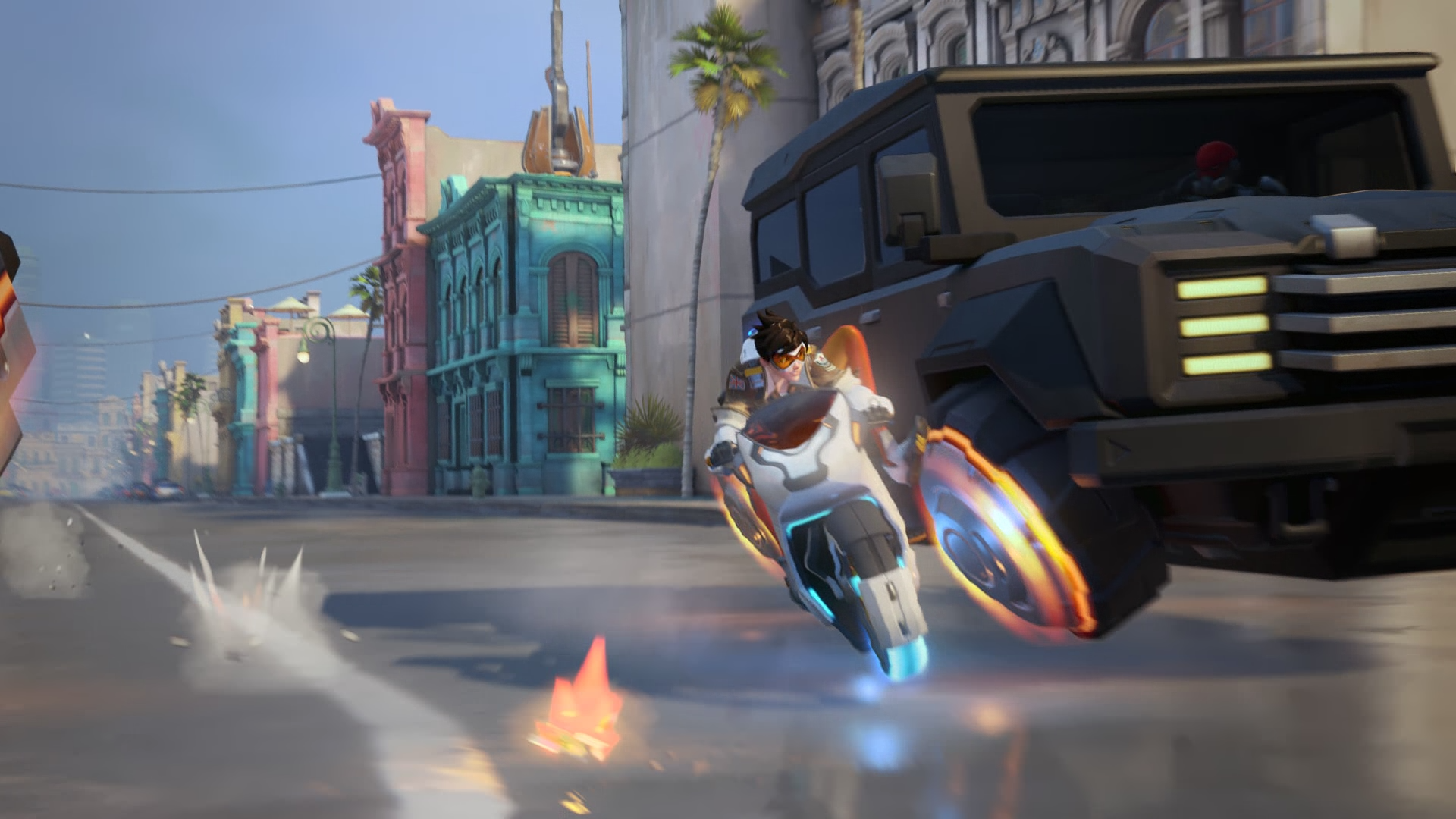 The reason I’m disappointed is that I couldn’t ride the motorcycle. It’s pretty simple maths, really: If you show me your game’s main character on a motorcycle, I expect to be able to ride it. This becomes achingly true if you show me that motorcycle in three separate places before I even get to the part where I play the dang game. And you allude to a chase scene! The mission, as it stands, is not a chase at all. That part happens in cut-scenes, and it’s way cooler than anything you actually do in the mission. Tracer weaves between a heavily armoured convoy guarding Maximilien on her glorious new hover-steed, and then she dispatches soldiers with some good old-fashioned motorcycle-fu. Winston, Genji, and Mercy obliterate cars in their own cool ways, too, but the motorcycle, man!

There is a pulse that beats in all of us no matter where or when we’re from, no matter how much knowledge of the world’s inscrutable workings we contain. It tells us to persevere, to move forward, to live. To ride the motorcycle.

It’s not like riding a motorcycle is some unattainable video game fantasy. Games have let me voyage to infinite worlds and experience sights that humans of previous eras couldn’t comprehend. They have also let me ride motorcycles and use them as swords. I imagine those ancient people—our hardy forebears, the First Men—would want to ride the Overwatch motorcycle, too. There is a pulse that beats in all of us no matter where or when we’re from, no matter how much knowledge of the world’s inscrutable workings we contain. It tells us to persevere, to move forward, to live. To ride the motorcycle. 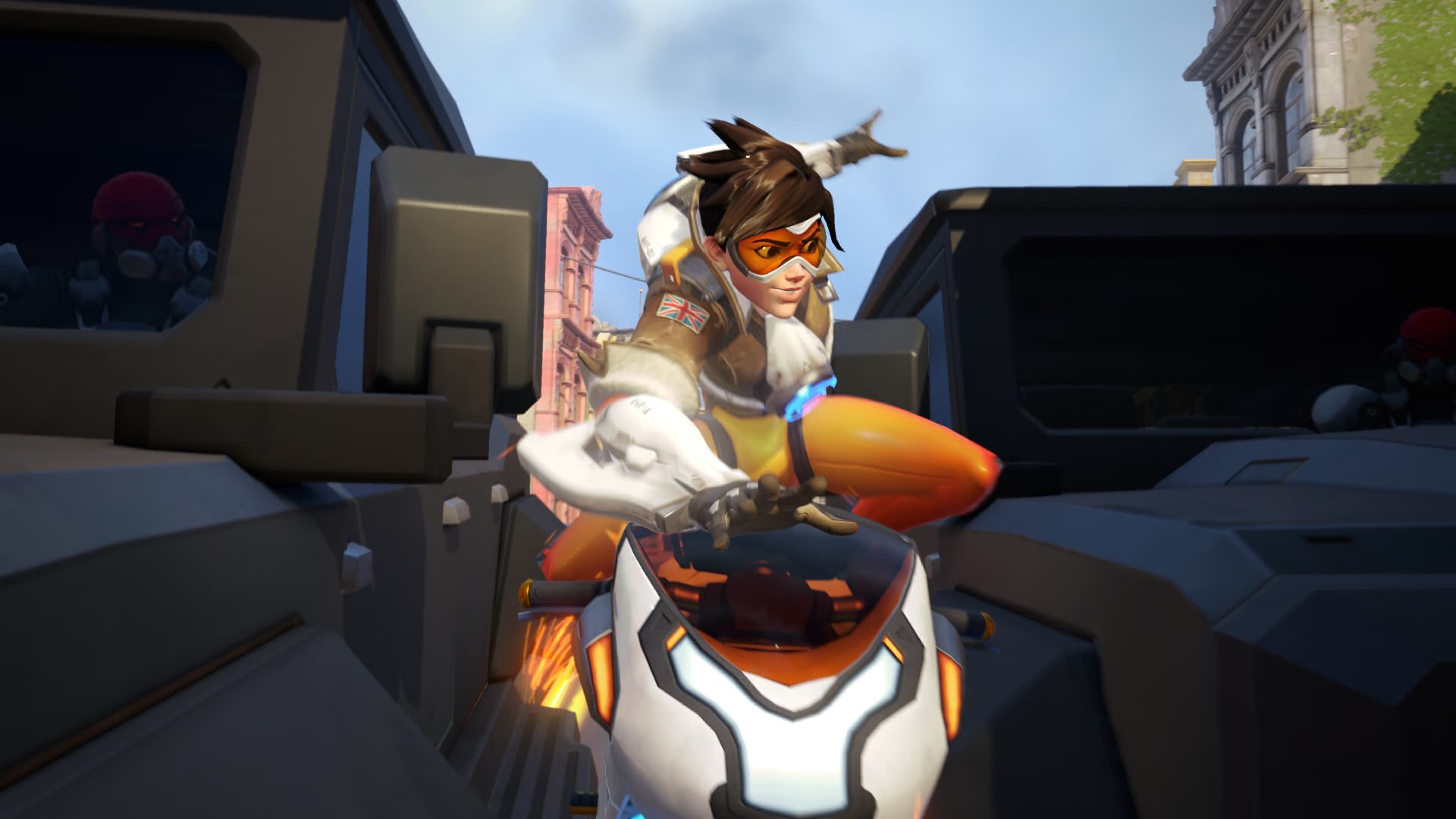 I get it: Overwatch is a video game that was not, strictly speaking, designed with motorcycles in mind. It probably would’ve taken far too much work for what is, ultimately, a one-off event. Cool. The last thing I’d want is for Blizzard employees to overwork themselves for the sake of a throwaway feature. With that in mind, why include the motorcycle at all? Tracer’s whole thing is that she’s fast. She could easily run or time hop to catch up with the convoy. If Blizzard still wanted wheels in the equation, they could have given her Heelys. As is, giving Tracer a motorcycle is kind of like giving Sonic The Hedgehog a car, or a snowboard, or any number of other means of locomotion that aren’t his furry, movie-poster legs: it misses the whole point.

Again, though, I’d be willing to overlook those gaping logical fallacies if I was just able to ride the motorcycle. To feel the wind in my virtual hair and see the open road outstretched before me, crowded with hopeless scrub soldiers for me to knock down like so many viscera-filled bowling pins. Alas, I fear I will only ever be able to ride that Overwatch motorcycle in my dreams.