In Sekiro: Shadows Die Twice, the thread between life and death is tenuous. As the One-Armed Wolf, a loyal shinobi seeking to save a young noble with a cursed bloodline, you traverse a feudal Japan so saturated with the remnants of war that the idea of mortality becomes fickle: dead bodies blending in with the local flora and fauna, so many wounded soldiers sharing their last words that you could create a compendium of the lost. This is all underscored by a cruel and ultimately gruelling irony — you cannot die.

Sekiro plays often with its sense of tone. The earnest solemnity of a samurai film is undercut by darkly absurd and comically bleak moments. There’s a training section offered to you by a man who exists only to die for you over and over, and he’s kind of chill about it. “Hey man,” he might as well say. “Wanna mess around and kill me a little more for practice?” Having an understandable existential crisis stemming from his inability to die, he asks you to murder him with the same casual listlessness of a lonely friend asking you over to watch the game for the third time this week. Death is kind of a joke, and it’s that exact sentiment that’s plunged the game’s world into utter chaos.

The player quickly becomes the butt of that joke, as Sekiro is punishingly difficult. (This should be shocking to roughly no one, given that it’s made by From Software, developer of the infamously challenging Souls games and Bloodborne.) The combat requires real attention to detail and a willingness to drill down on a few sets of possible reactions. Boss and mid-boss battles are a furious interplay of choreographed patterns mixed with improvisation. First you learn an enemy’s moves; then, maybe five or 10 deaths later, the real battle begins. Learning the early boss Lady Butterfly’s attack patterns is that much more satisfying because the presentation is excellent. She moves like a dancer, and her attack animations tell a story.

I found myself deeply immersed in the way these battles worked, obsessing over each animation, every cue, every possible breakaway combination that could happen as a result of my own reactions. Combat in Sekiro is like a dance, but it’s also like a series of the fastest-ever choose-your-own-adventure branches: Parrying this leads to a thrust. Not blocking leads to a sweep. With the addition of shinobi prosthetics and skills, all of which can be upgraded via skill trees, the options open up immensely. As stubborn as Sekiro is in forcing players to learn how each enemy telegraphs its moves, there are still lots of ways to approach each encounter.

For example, there’s this one tough boss fight in a poison pit. Enormous statues of Buddha protrude from the sickly seaweed-coloured lake, their palms outstretched for you to land in as a Snake-Eyes gunner’s shots explode in a firecracker flare of twining lights. You can dodge and dash and soar through the air and ultimately clash with her, or you can bait her into the poison pool and sit atop a cliff face while her health slowly, slowly, painfully slowly drains. The game had just given me a tip about enemies in poisonous areas having a higher poison resistance—I couldn’t tell whether it was warning me not to use the poison or coaxing me into it. I took my win and kept it moving all the same, quietly deciding that maybe that was the only cheese strategy I wanted to use during this playthrough. Generally, that worked out well. As I fought and fought and fought, I found often that playing and dying a lot, resting, and coming back actually made things — this word comes up often in discussions about FromSoftware games — click.

Back of the box quote: I can't believe it's not Buddha!
Type of game: Action/stealth/death simulator
Liked: Fighting and failing, figuring it out.
Disliked: Stealth got stale
Developer: FromSoftware
Platforms: PlayStation 4 (played), Xbox One, PC
Release date: 22 March 2019
Played: About 60 hours and counting

Sekiro’s combat relies on two stats called Vitality, which is health, and Posture, represented by a meter that builds as you’re essentially knocked off balance. Your enemy has the same meters. The higher the Posture meter gets, the less poised you become. The lower your Vitality gets, the faster your Posture meter rises. If your Posture meter maxes out, you’re susceptible to any attack from an opponent, which often results in a substantial punish. If you max out your opponent’s Posture bar, you’re able to perform a deathblow and either kill them or remove a full bar of their health. Generally, this system rewards aggressive gameplay and strategically applying pressure. It’s hectic and can be an absolute blast.

What wasn’t a blast was the feeling that I was repeating myself. Sekiro’s winding world is full of near-duplicate mini-boss fights, and I often found myself asking why. I’m guessing the developers of the game were trying to coax the player into reconsidering their approaches to boss fights, but I found that I wasn’t really forced to do that in several of these repeat encounters, nor did I even really feel the satisfaction of being able to curb stomp an enemy that had previously led me to struggle. Fortunately, most of these encounters are optional, and while they are necessary for a completionist run (and to be fair, not that much of a time sink), I found myself thankful that I could just pass on them.

You do a lot of passing in Sekiro, which is as much a game about stealth as it is about swordplay and shinobi arts. The game’s stealth started off exciting. It was thrilling and fun to discover new enemy patterns and layouts, dig into how my tools and items worked, and quickly face-plant into the consequences of failure. But as the game progressed, I found myself tired of dodging around random mooks who I could easily kill one-on-one or even one-on-two, even when they were eventually flanked by stronger ninja and new, more disciplined samurai types. That was compounded by the fact that enemies’ intelligence didn’t appear to grow any more complex and seemed to differ mostly in range of vision, hearing, and how long enemies would stare in your general direction after spotting you. Most of the stealth sections felt interchangeable.

But then there are stealth moments that Sekiro gets really, really right. In addition to a couple unique chase sequences that I won’t spoil, there’s a particularly striking boss encounter in the late mid-game that has stuck with me. It’s more of a hunt than a fight, meaning stealth is key, and there’s a very light puzzle element that makes the change of pace from normal combat deeply refreshing. Mounting pressure from a growing wave of surrounding enemies escalates the difficulty, creating a totally different challenge from what I’d already seen. It’s really, really good. There’s also a stealth portion in the endgame that’s so punishing it skirts the line of being interesting, but I still found myself largely over that aspect by the time the game was done and feeling like it could have gone so much farther. 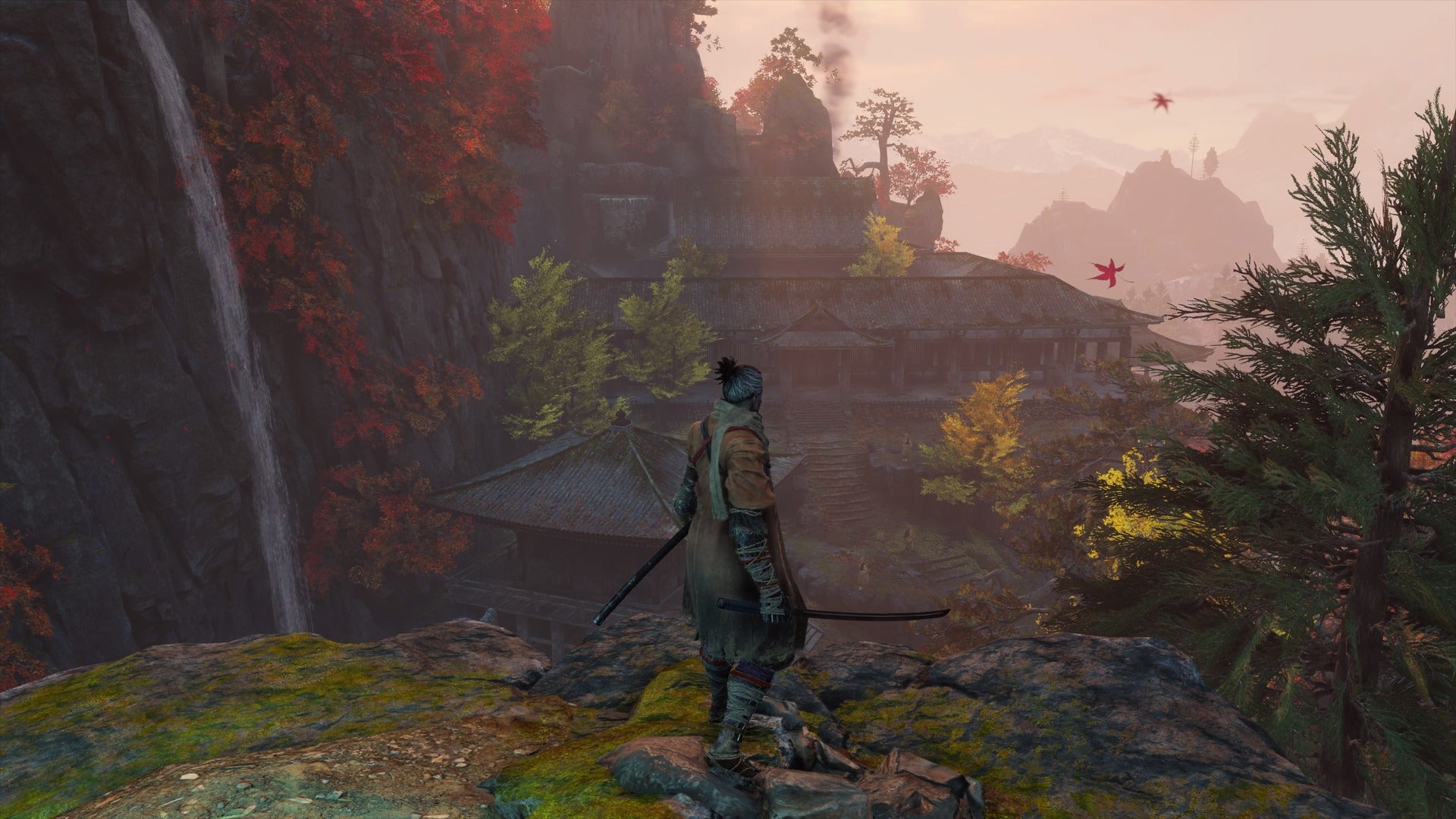 The music, mostly sparse, works well when it does show up. Atmospheric touches go a long way to give the string-laden tracks depth and dimension. The encounter music in a monastery area, for example, is underscored by the deep rumble of throat chanting, highlighting the atmospheric differences from other areas you’ve been in and underscoring the underlying theme: These monks have strayed from enlightenment. A normally meditative and harmonious sound is used to creepy, otherworldly effect, highlighting something the mid- and late-game locales completely nail: The line between life and death is blurred, and with it, death creeps into the mortal world in horrifying ways.

That theme is also served in interesting ways by the non-linearity of Sekiro’s world. I explored areas I didn’t yet need to visit before progressing the story, and by the time it pivoted even further into the themes of decay and immortality, I had seen for myself parts of the world warped into grotesque and eldritch forms by the quest for eternal life, which made my foray into the next parts of the game that much more poignant. I also felt a sense of accomplishment and was thrilled to realise that I had already nearly completed certain quest objectives, adding to the sense I already had that the world folded in on itself in interesting and rewarding ways. I finally came to understand the way that immortality really figured into the story.

The Wolf’s own immortality comes with a price: When you die, the non-player characters you’ve met and befriended will grow infected with a plague called Dragonrot. The illness is apparently deadly, but it won’t kill anyone, and it can be cured in-game via items. You can’t access sidequests and certain lines of dialogue from ill NPCs, but the story otherwise goes unaffected. I initially found this a little anticlimactic, but now that I consider it more of a background story beat than a truly important mechanic, I feel it has a place in the game. I do wish there were more real implications of inflicting it on those around you, though. What would it look like for Dragonrot to have permanent effects on the game? Probably a lot of rage quits.

The game’s death mechanics do more for the themes than the actual gameplay, and that’s fine. You lose skill points and money when you die, which was deeply distressing in my early gameplay but ultimately became trivial as I learned to use cash-storing coin purses and keep an eye out for how much experience I might stand to lose at any given moment. I got more strategic about who to engage and when, and how to prepare for those engagements. Then there’s Unseen Aid, a blessing from on high that sometimes triggers when you die without an available resurrection, preventing you from losing your resources upon death. It starts with a 30 per cent chance of activation and reduces even further when the characters are afflicted by Dragonrot. As a result, I never even thought to rely on it. But again, like the Dragonrot itself, it meshes with the game’s religious overtones, so I was able to appreciate it on some level. 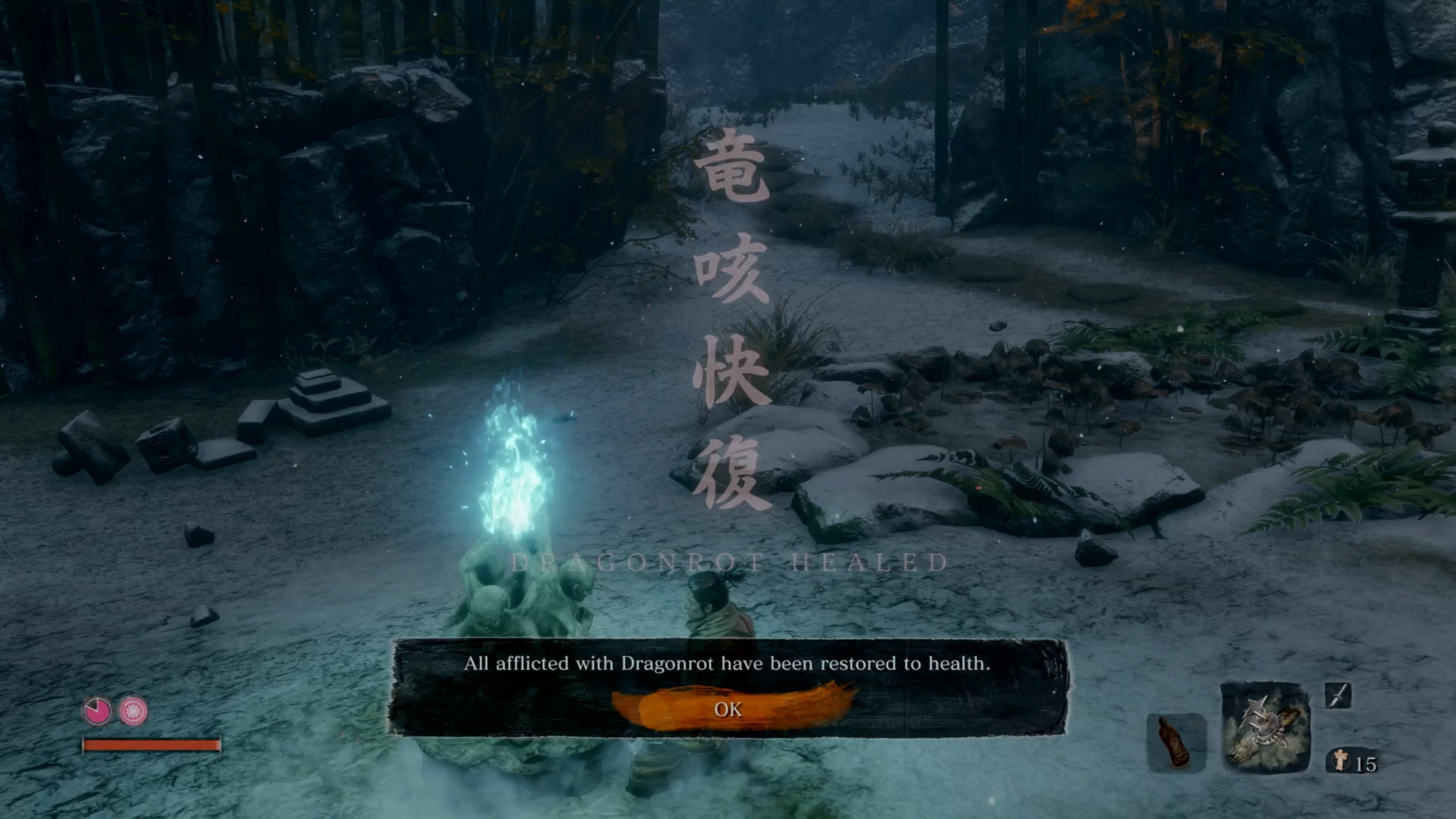 Sekiro gets a whole lot right. Its themes permeate its feudal Japan in a compelling way, and for the most part, the gameplay is deeply satisfying. There are things it could do better, particularly avoiding repetition, but the notes Sekiro does hit are memorable enough that the slog doesn’t totally ruin the flow of gameplay, and the inertia into the end of the game carries strong. The challenge Sekiro presents is daunting and time-consuming. Ultimately, the question I had coming in was, “Will this be worth it?” After moving through countless cycles of life and death, tensing, raging, and finally, conquering my challenges and letting go of my anger like Buddha, I decided that it was.