The Best Stories Hidden in The Division

The Division 2 launches this week, and I can’t wait to hear its audio logs. I mean, sure, the rest of the game might be good, but did you know that the first Division had some great audio logs?

The serious, politically fraught main story of Tom Clancy’s The Division is the only narrative element that most people talk about when it comes to Ubisoft’s huge shooting game. Scientist releases a biological weapons attack by contaminating paper currency in New York City on Black Friday. Calamity ensues. Government activates sleeper agents—The Division, a.k.a. you!—in quarantined Manhattan to shoot and kill violent ex-cons, armed gangs and other people running wild in that area.

Less well publicised are the dozens of other stories Ubisoft tucked into the game, most of them in hundreds of audio logs sprinkled throughout the city. Many of them are so interesting, so well-written, so emotional that The Division turned out to be one of my favourite games in terms of storytelling. Sure, I liked the shooting in the game, but I also liked treating it like the world’s most expensive version of Gone Home. Playing The Division I was happy to walk through, listening to the stories of the people who lived in its obliterated city.

Some of the audio logs are particularly harrowing. There’s a girl on the phone with her mother despairing that her brother is threatening that they’ll have to eat their guinea pig, presumably because they’re out of food.

There’s another log of two women on the phone with each other, one telling the other about a new club with an unsettling theme. “Oh my god, it’s incredible: The whole club is like a hospital. And you sit in wheelchairs and you drink out of IV tubes. And, if you want snacks, they bring them to you… in bedpans.” Her friend is appalled.

There are audio logs featuring people stressing about lack of food for Christmas, a stand-up comedian workshopping a joke about the crisis via voicemail, two gamers having a phone conversation in which one is excited that because of the curfew he’s been able to level one of his “alt” characters to level 24, a woman saying to the man she’s with that she just hopes his kids will someday call her mum. 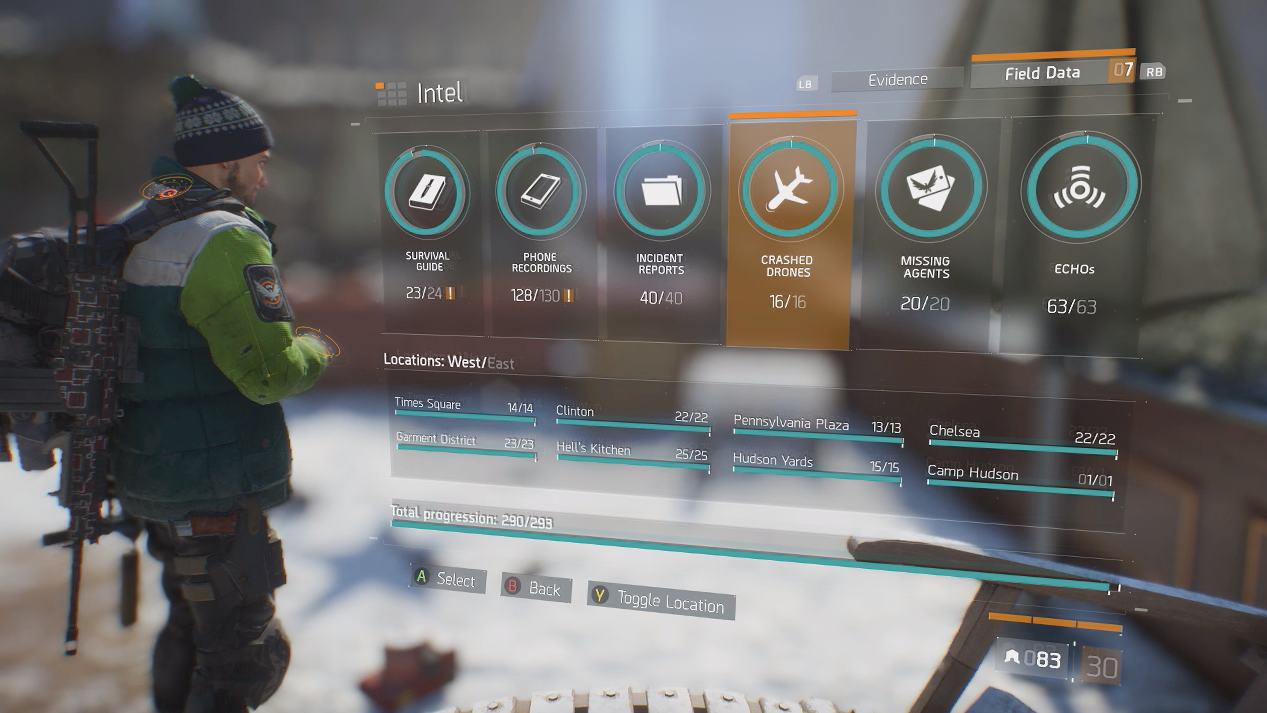 At one point, I had all the audio logs. Then they added dozens more.

Some of the logs are one-offs. Others end up combining into a multi-part tales. In one set, a former G7 protestor named Eva Acosta who says she camped out in Zuccotti Park for Occupy Wall Street sneaks into Manhattan to see what’s become of it and chronicles her sightings, only to eventually despair that she can’t get back out.

There’s also a seven-part series of audio logs that begins ordinarily enough with a man calling his brother in Pennsylvania to talk about the impact of the attack. In the second recording, he’s talking about staying in town to take care of his girlfriend, that he wants to be the doting boyfriend and watch Ryan Gosling movies with her. He gives his love to his brother’s kids. By the seventh audio file, he’s telling his brother that the girlfriend died and that he saw some rioters accost an old man for his suitcase and, when the man refused, the aggressors beat him until he passed out. “Danny, I was one of them,” he says, “Get out of town. Alright, put the boys in the car. Go to the lake. And take Dad’s shotgun. The three of you can live there for months. Do it, Danny. Before it’s too late.”

Then there’s a guy who seems to become a sort of Batman, only to get his arse kicked.

Now, this city needs a hero. And I will give them that hero. I have always known that it was my destiny to someday be Manhattan’s last defender of—of truth and of justice. And now...now is my time, It is time for me to — to don my mask and my cape and to go forth into the streets and to punish the wicked and to defend the innocent! It took the Dollar Flu, the—the so-called Green Poison to trigger my latent powers. But… I became indestructible. I had become the living symbol of this city, and I have sworn to protect it. Rikers, the—the LMB, the strange men with the flamethrowers. I fought them all.. In the name of justice.

I made myself a, er, a costume. I took Kevlar form them, and — and I stitched it together, and I — I made a mask and a cape. The cape was, er, was not very good in a fight, though. So.. so I got rid of that after a while. But—but I always took the fight to the enemy. I stopped ‘em from attacking the innocents. Dropping down on ‘em from rooftops. Preventing them from preying on the weak. And the Riker who tried to follow me back to my apartment, well, I am sure—I am sure that I lost him before he fo—... Wait. What is that noise? I’ll, er. I’ll be back in a minute.

It has been a long time, my friend. A long time since I told you about my adventures. My duty to this—this city, even. You see, I was attacked by—by—by a—a great many of those escaped prisoners. But—but I fought them, even though I was outnumbered, and I escaped through the window.

I haven’t been back since. It’s — it’s too dangerous. All my notes, all my gadgets, all—all my —my—my tools of justice must remain behind. But—but I will find a new lair, and —and I will plot my revenge. And when the time comes I will re-emerge once again and show them the power of justice!

The most powerful logs are a pair collectively called “Out.” The first is from a woman named Renee who calls her mother and leaves her a message telling her that she is gay:

The second recording you can find for this set is a voicemail reply from Renee’s mum:

Renee, it’s your mother. I got your message...and [sigh] I know, honey. I’ve known for a long time. And it’s okay. Nothing you could do could stop me from loving you. But Renee. I’ve seen the news and I’m so worried about you right now. What I need you to do is to be strong for you and… Julie, to stay safe and look after each other. I love you, Renee. Call me when you get this.

When I was playing The Division 2’s beta, I looked for this kind of stuff. I didn’t find much, but was encouraged when I stumbled across an audio log and thrilled when I saw an element on the map labelled an “echo.” The first Division had these “echo” elements. There were 63 of them, each of which was a sort of digital recreation of a pre-disaster or mid-disaster scene. You can walk through these recreations and listen in to what the characters in them have to say, like exploring some interactive theatre.

You might find a hostage taking and be able to explore a shootout that happened around it. 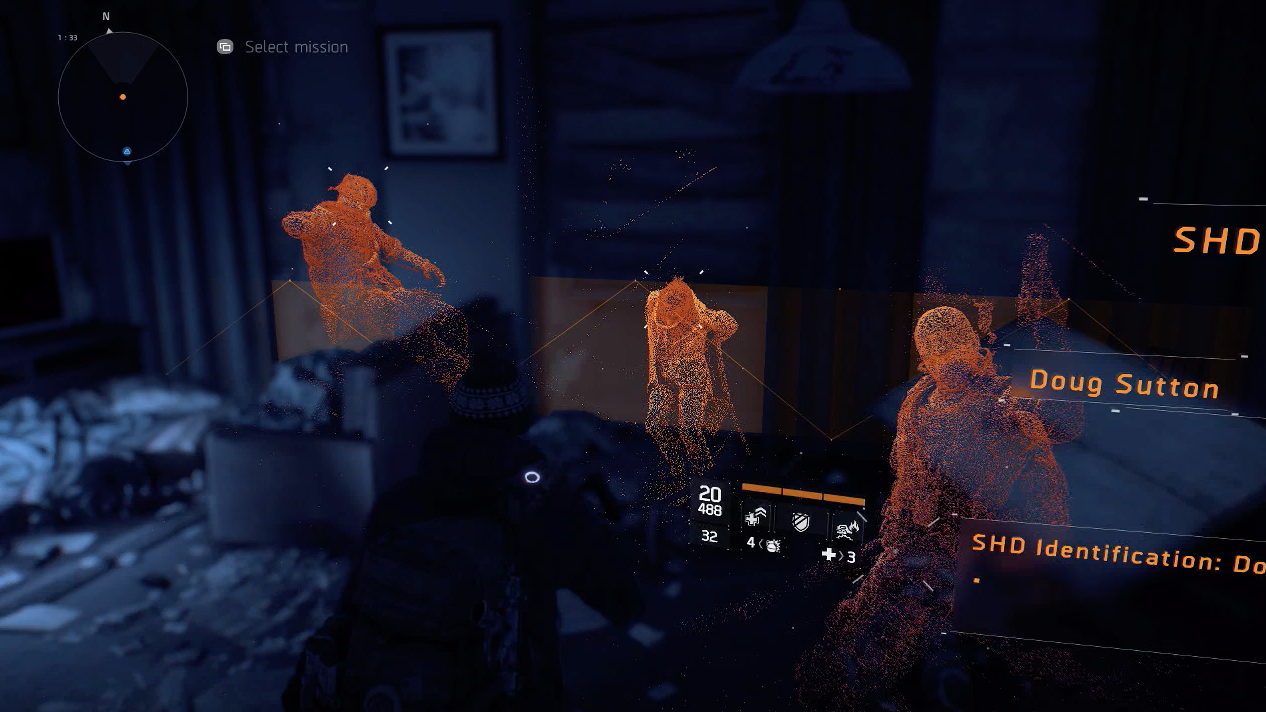 Or, remember that Batman guy? There’s also a Superman-like guy who first appears in an echo in which he’s talking to a woman about how he seems to be able to survive a car crash, a fire and now the Black Friday attack. “C’mon David, what do you think you are, some kind of superman?” his friend asks.

In a later echo, the two are on a rooftop. David jumps off. 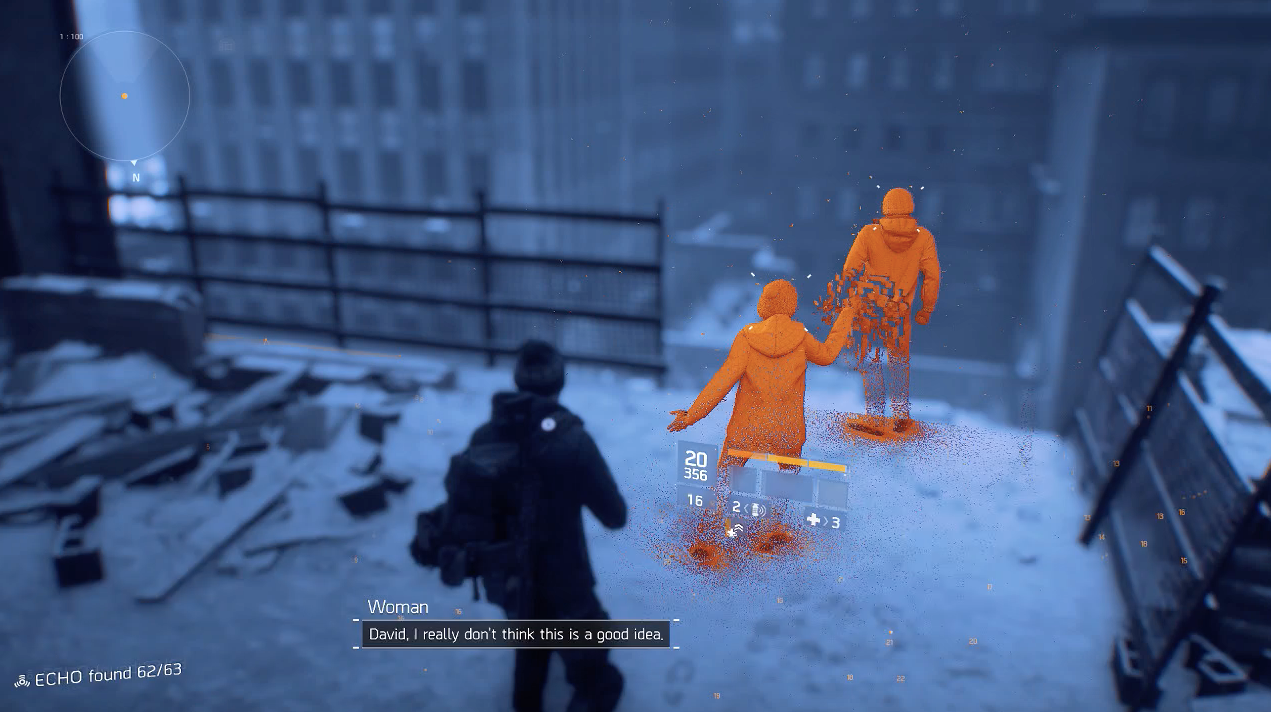 And in a third, called Origin (with the subtitle “A man begins to find his true purpose”), the two are sitting on a park bench, marvelling at what just happened on the rooftop. “It changes everything,” she exclaims. “What are you going to do??”

There are a series of echoes involving tracking down a woman named Alexis Kwan at the request of a doctor named Jessica Kandel. The doctor tells you of a support group Kwan ran, so you can go to the place where that group met and explore an after-image of a meeting where Kwan no-showed. 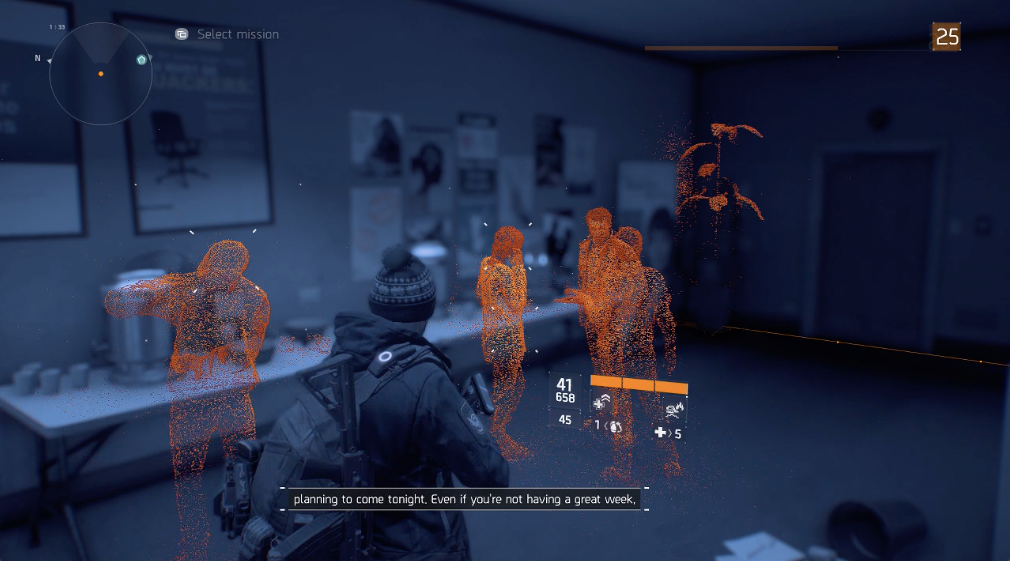 Then you can go to Kwan’s place, where you’ll see an after-image of her chucking her mobile phone. More detective work will reveal that she’s an acclaimed pianist and was in a relationship with Kendal. 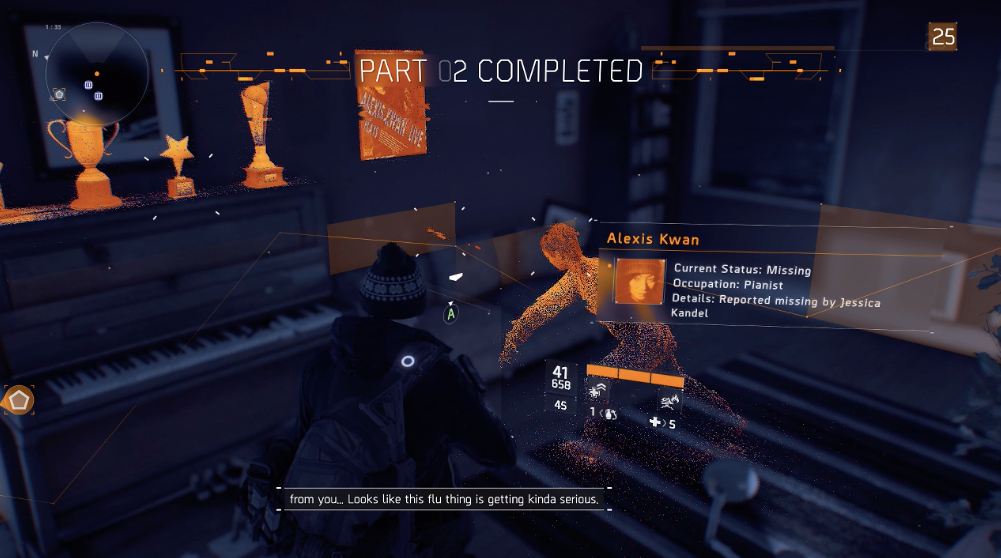 Another echo, this one in Kendal’s flat, shows an after-image of Kwan writing a letter, saying she’s sick from the weapons attack and doesn’t think they’ll see each other again. 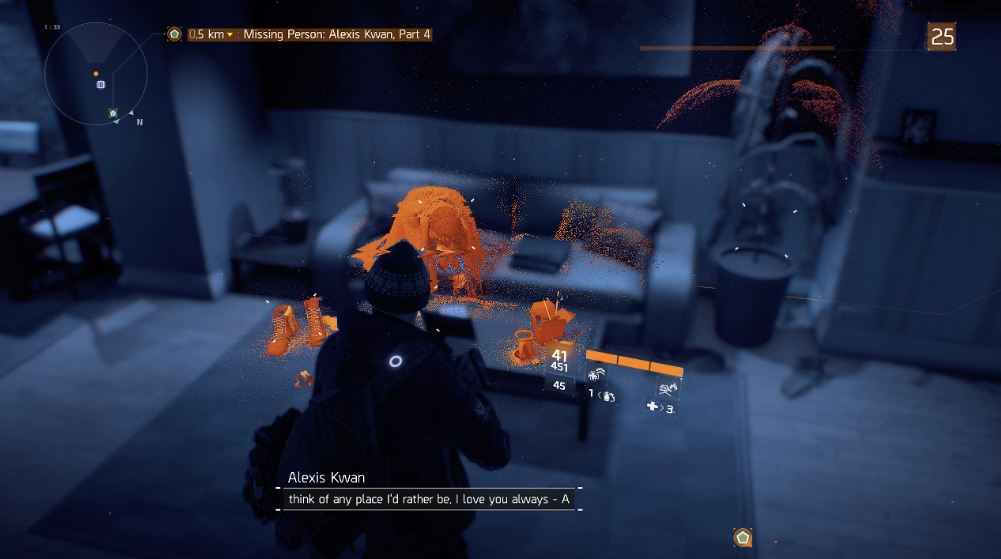 Sometimes these ghostly stories emerge into the main game world. That happens with the search for Alexis Kwan. You find her out in the world, playing the piano in the snow. 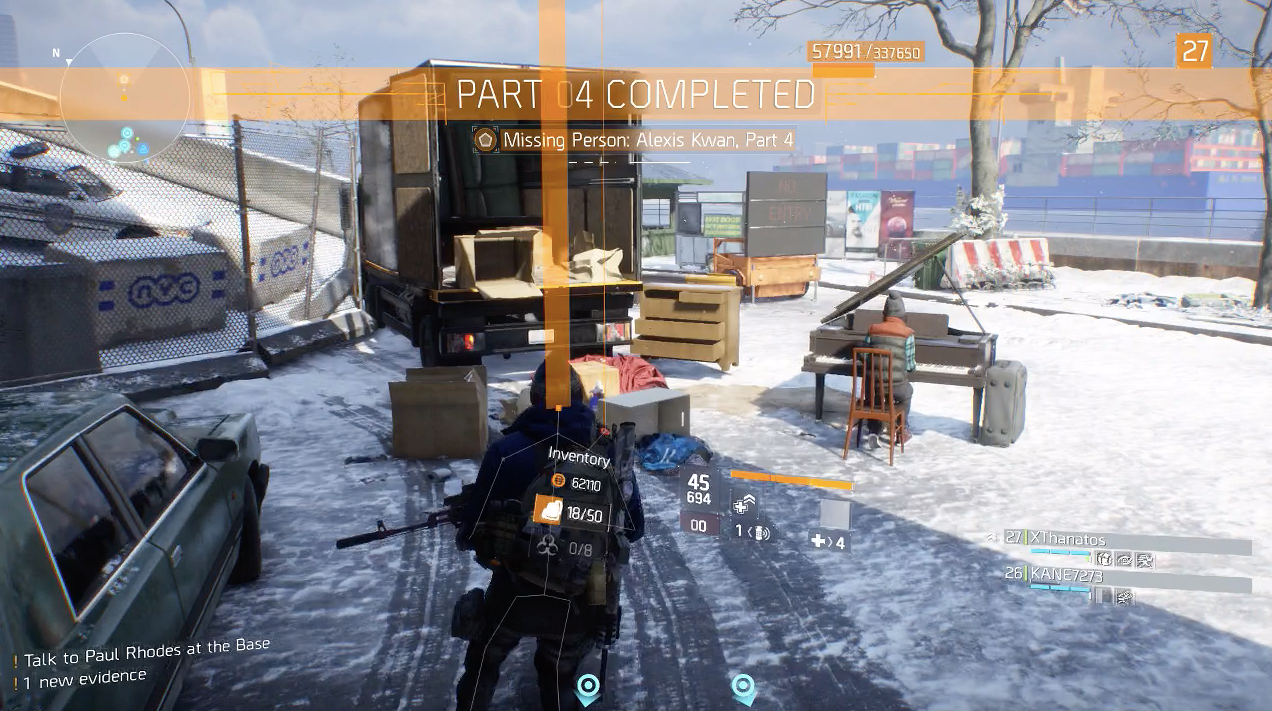 And then, what do you know? She later shows up back in your base of operations, playing the piano for other survivors.

The creators of the first Division squeezed so many subtler stories so effectively into their macho shooting game that even the announced change of season for The Division 2, from snowy New York winter to sweltering DC summer, had me reminiscing about how well the first game sketched stories onto the ground.

The tracks of a car crashed into a pillar, for example, hint at a desperate drive and a swerve away from a checkpoint.

A slightly opened boot shows luggage spilled out and left behind. 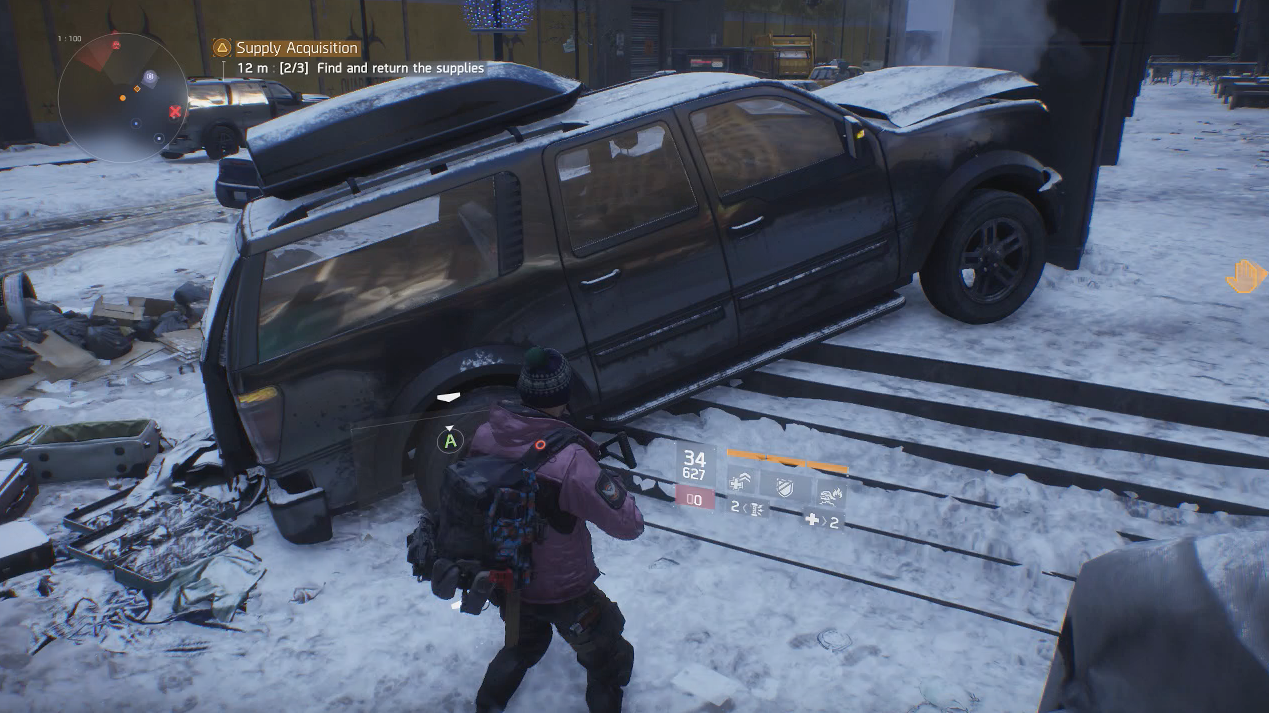 This is the kind of storytelling an army of developers can create. While some people work on the shooting or the loot or the lens flares, others can create and drop hundreds of stories into the game world. And as you explore, you get to discover them. You can sometimes even hear them emanating from nearby windows.

The first Division was many things for many people. For me, it was one of the most impressive and unexpected pieces of interactive fiction I’ve encountered, and that’s why, when I finally start The Division 2, I’m not just going to the White House, not just going to the Dark Zone, and not just playing to the endgame. I’m going to hunt for the game’s hidden stories and find each and every one of them, even if it takes me the rest of the year.