I love me some Tetris. Give it to me on whatever you want and I’ll play it. Usually, I’ll enjoy it. I gave a glowing review to Tetris Effect last year for the PlayStation 4. So when I found out that a multiplayer-only version of the game was coming to Switch, I had to dive in.

Unfortunately, this Tetris-themed battle royale is not quite what I was looking for. Watch the video above to see some of my victories and hear my concerns, or read the script down below.

When I first saw the trailer for Tetris 99, I was extremely excited. But after a handful of wins and tense matches, I found myself growing pretty bored with the Nintendo Switch’s new puzzle battle royale. It explores some interesting strategies but ultimately doesn’t quite stack up with my favourite Tetris games.

On paper, Tetris 99 is intriguing. 99 players clear lines in the hopes of knocking out fellow opponents by sending lines their way. You’re competing to be the last one standing. But 99 players is a bit excessive even if it has a nice ring to it.

It takes quite a while for things to get interesting, and the path there just doesn’t feel engaging enough to warrant long play sessions. As a result, it just makes me less inclined to want to come back to it. 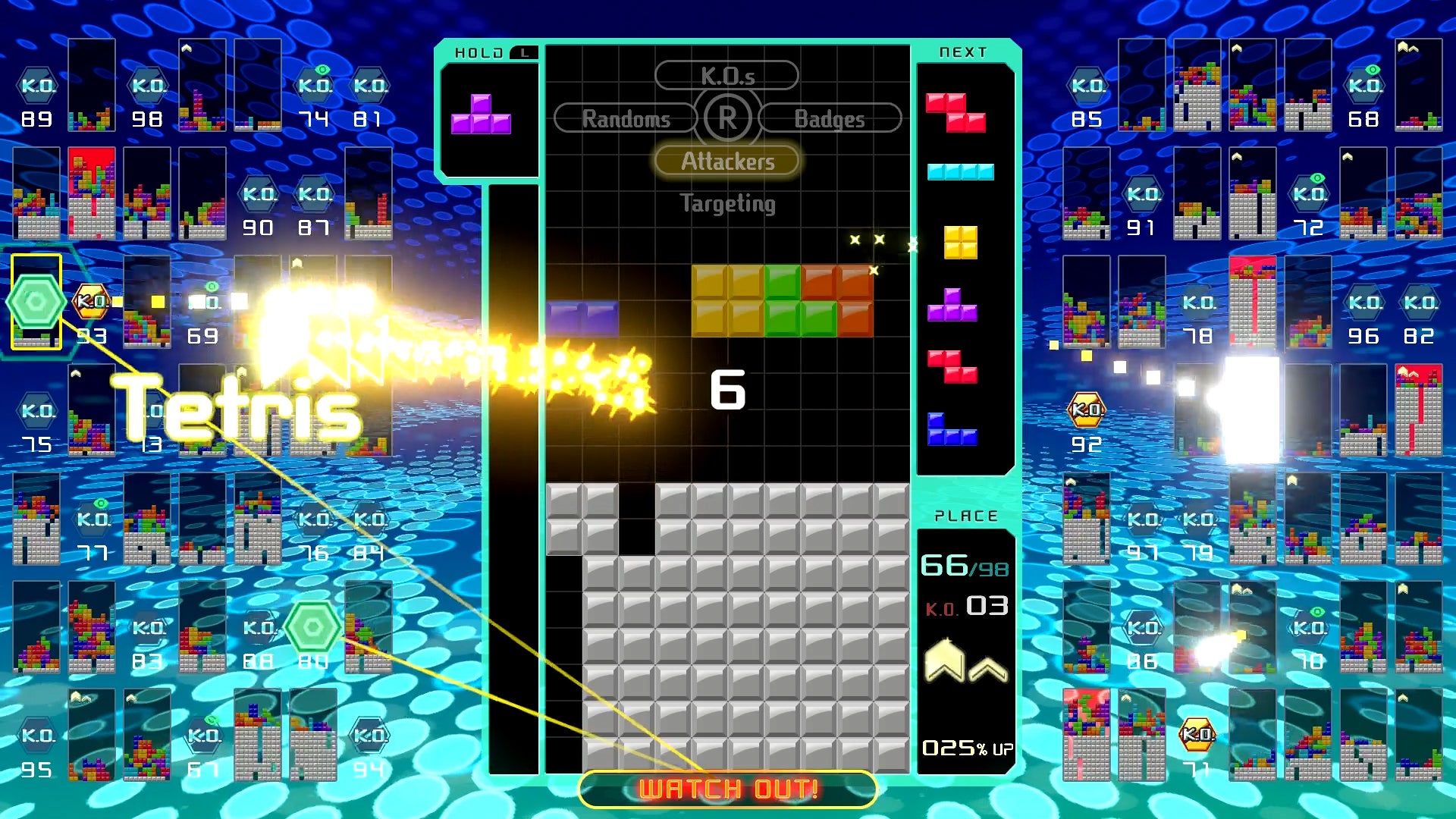 For higher level Tetris players, the grind into the top 10 drags. And finally managing to break into that top 10 slot only to fall short is frustrating in a way that isn’t present in battle royale shooters. Part of the appeal for me in Apex Legends is finding the right mix of team chemistry and picking another part of the map to land in, but with Tetris 99, each match is yet another Tetris grind from the bottom.

The more I played, the more I just wanted to be matched up with the room’s 20 best players so I could just go toe-to-toe with them instead. Oftentimes, I’m dealing with the luckiest players towards the end and not necessarily the best of the bunch, myself included.

With Tetris 99, there’s so much already happening that it can be hard to figure out its rules for sending blocks into other people’s games. Players can target blocks at other players using the Switch’s left thumbstick or moving the right thumbstick in one of four directions. But can you be sure that other players really know what they’re doing? No, because there’s no tutorial and those controls are not intuitive. 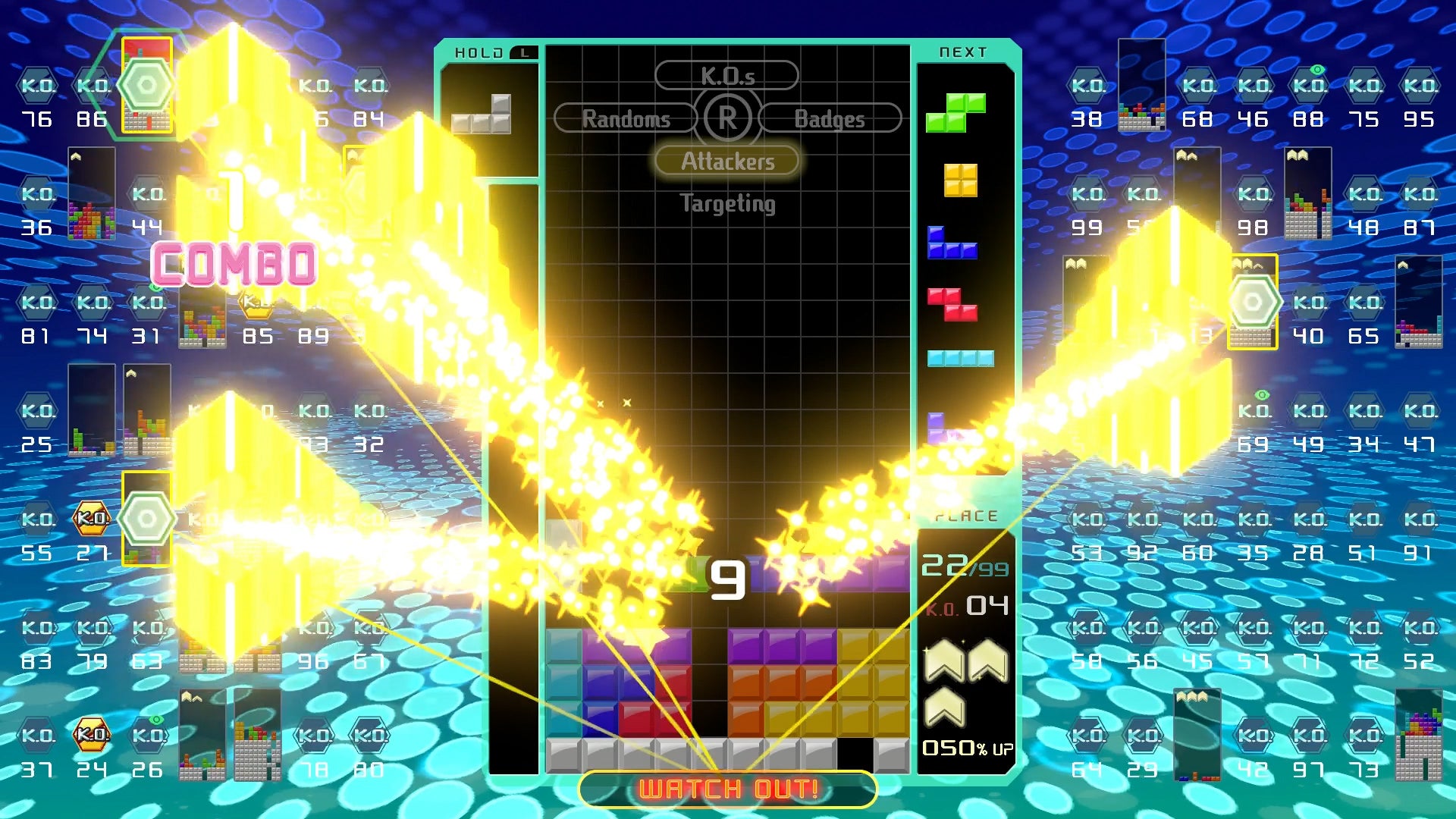 Once the pace picks up and the player count goes down, it is useful to be able to target people who are trailing behind for easy picking. Knowing when to switch from offence to defence is fun and a new and mindful way to approach Tetris. For the more seasoned Tetris players out there, it’s fun to be able to apply that skillset to different fronts and add a spicy layer of strategy. But there is a cadence to it that gets stale.

I think this game was made to be played handheld, which is fine, but the Switch’s Joy-cons aren’t ideal for a game that relies so heavily on the d-pad. The Pro Controller’s got its own d-pad issues, with left or right inputs registering as up sometimes.

So the game can be a grind, but it does get more exciting late in a match. Maybe I could deal with that grind if not for my biggest problem with the game: the presentation. The game looks and sounds like a game that I might have bought on my flip phone in the early 2000’s. It’s a deliberate choice that could have been cool in an ironic way but just looks pretty corny.

And after last year’s gorgeous Tetris Effect, it’s hard to go back. 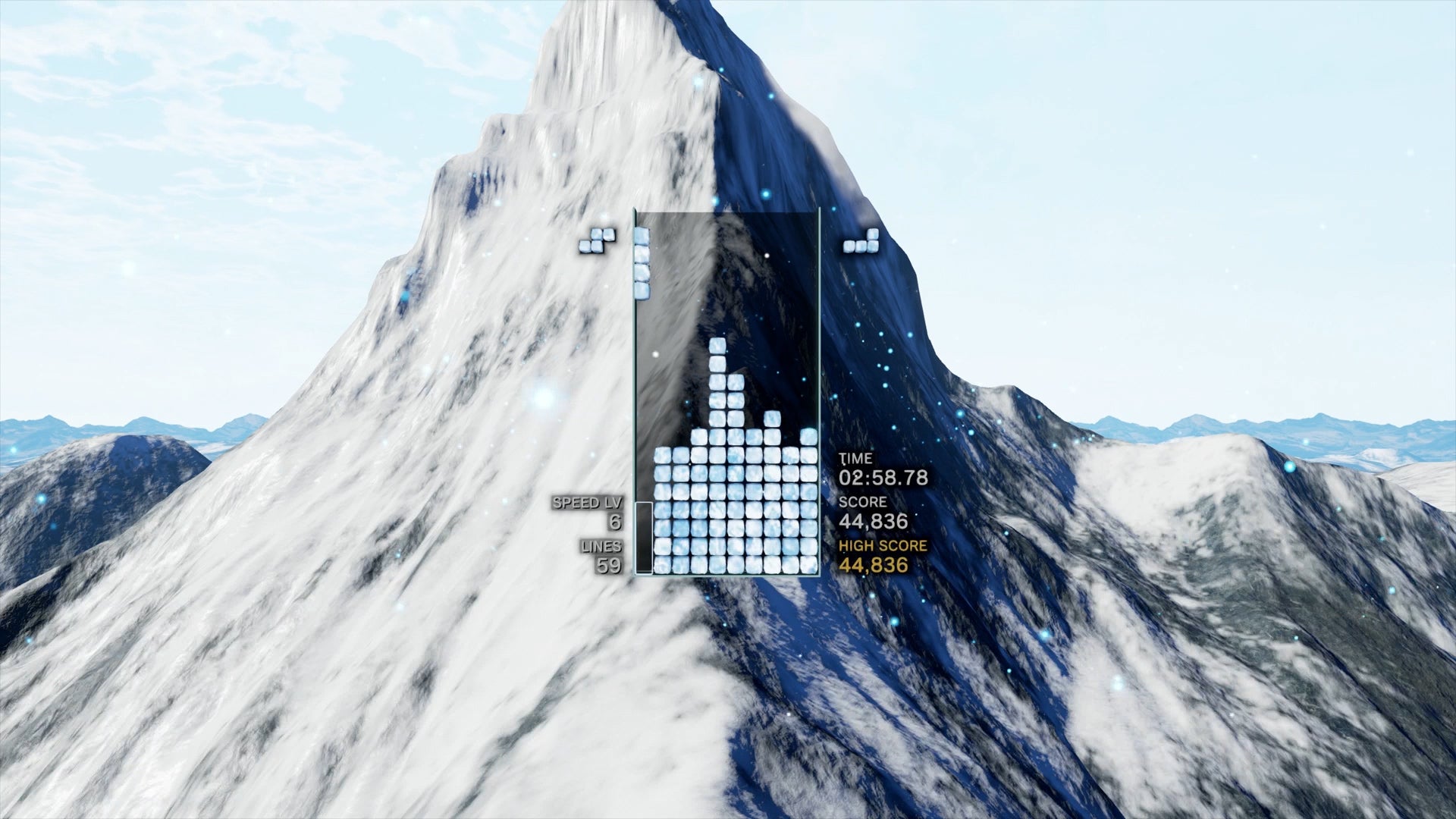 I also find the music to be incredibly vexing. I’m not particularly fond of the songs that each game cycles through and even muted the game to listen to music. I guess in some ways, it would be the perfect commute game since I could just listen to music off of my phone, but there are no offline modes, and unless you live in some future city, this is a game that requires a stable internet connection.

On a personal level, part of the thrill of playing Tetris is the tension that comes with trying to surpass a high score or pushing myself past my limits. With Tetris 99, it’s more about me just getting a good hand. The rush comes from the nerves of needing to outlast your opponent and survive the to be the best player out of 99 others but it puts me in a weird headspace. It’s less of a personal achievement glow and more lizard brain anxiety.

BACK OF THE BOX QUOTE: “Tidying Up Kumite”
TYPE OF GAME: Sadistic Tetris
LIKED: Tetris feels solid. Knowing when to change strategies mid-game can feel really rewarding when you nail it.
DISLIKED: The UI, music and overall presentation. Lack of tutorial and single-player practice modes. The grind back to the top can become tiring after a few matches.
DEVELOPER: Arika
PLATFORMS: Switch
RELEASE DATE: 13 February
PLAYED: About 8 hours. Currently at level 23 with 8 wins under my belt, 249 total knockouts, 832 Tetrises and 7378 lines cleared.

I usually find Tetris to be this calming experience that lets me hyper-focus on something and Tetris 99 makes me feel like I’m always scrambling in a way that, sure, is exciting but not something I want to chill with long term. Thankfully, there are plenty of ways to enjoy Tetris right now.

I dig what Tetris 99 is trying to do, but it’s not my first choice. Maybe on the next drop.