The Yakuza Series Treats the Homeless With Empathy And Respect

By Elizabeth Henges on at

Throughout the Yakuza series, we’re shown that protagonist Kazuma Kiryu is not a normal man. Despite being a member of an organised crime gang, he stubbornly sticks to his good morals even if that means the entire seedy underbelly of Kamurocho turns against him. A gruff man with a soft heart, Kiryu will help those in need without worrying about how this might affect his own life. This sense of empathy extends to the homeless people that are seen throughout the games.

Homelessness is a societal problem that is often looked upon with disdain in first-world countries. While some are sympathetic to the plights of those without a stable place to call home, others would rather not see the problem. Homeless people are often seen as nuisances—not as people trying to help themselves, but attempting to leech off of “successful” society members. Some even think that the panhandlers they see on the street aren’t homeless, but are instead using ill-gained empathy to earn enough to live in big homes with nice cars.

Often, video games do not help to dispel these negative connotations. A mission in Watch Dogs 2 has a group experimenting on the homeless, seeing them less as people and more as a resource to be exploited. The addition of the homeless in Sim City led to a divisive and somewhat unsettling fan reaction, painting a bleak picture of public opinion on the homelessness crisis.

If the homeless aren’t being viewed as leeches, they are often completely absent from media, despite over 63,000 homeless residing in New York City alone. There are some smaller indie games trying to change this perception, but generally, the mainstream media’s view of the homeless is depressing at best and damaging at worst. Yakuza, though, bucks this trend and treats its homeless population with empathy, and sometimes outright respect.

Early on in Yakuza 0, a prequel in the series that is set in 1988, there’s an incident where an unsavoury estate agent hires homeless people to squat near a bar, in an attempt to drive away business and run the owner out of this prime real estate spot. It eventually works and helps to reinforce the idea that the homeless are just nuisances that many would never have to deal with. Kiryu doesn’t seem to hold any ill will to the paid homeless squatter, however—they were getting paid well to be a nuisance, and we quickly learn that the bar owner was just holding out for a better payout of his own. In Chapter 10 of Yakuza 0, Kiryu needs to lay low for a while. The now-former yakuza member has gained the attention of the lieutenants of the Dojima family, and no one wants to get involved. His search for shelter eventually leads to the homeless community in Kamurocho, which has taken residence in one of the parks. A kind-hearted man allows Kiryu to stay with him in his small, self-built lodging. Neither the yakuza nor many others come into the community, so the protagonist can rest somewhat easily in the makeshift “town.”

However, some teenagers come into the park late at night, looking for some homeless folks to beat up. Kiryu’s host tells him to lay low and keep quiet and eventually, the teens will get bored and leave… he hopes. Kiryu is a man of justice, however, and will not let this stand. He heads out and teaches the ruffians a lesson about picking on the less fortunate.

Kiryu receives more help from the homeless in the original Yakuza game, which was recently re-released as Yakuza Kiwami. This time, he needs a hiding place for Haruka, a 9-year-old girl who is being targeted by multiple yakuza for unknown reasons. Between the events of Yakuza 0 and Kiwami, an informant called the Florist has set up base in the homeless park and employs many of the residents to help protect his trade. Having Haruka be hidden in one of the homeless men’s makeshift homes may seem like an order from the Florist, but the homeless are able to be autonomous. The man that shares his home with the little girl is kind-hearted and cares for Haruka’s safety. After all, the yakuza would most certainly pay someone for delivering Haruka to them; instead, the man risks his well-being when he has little to gain. 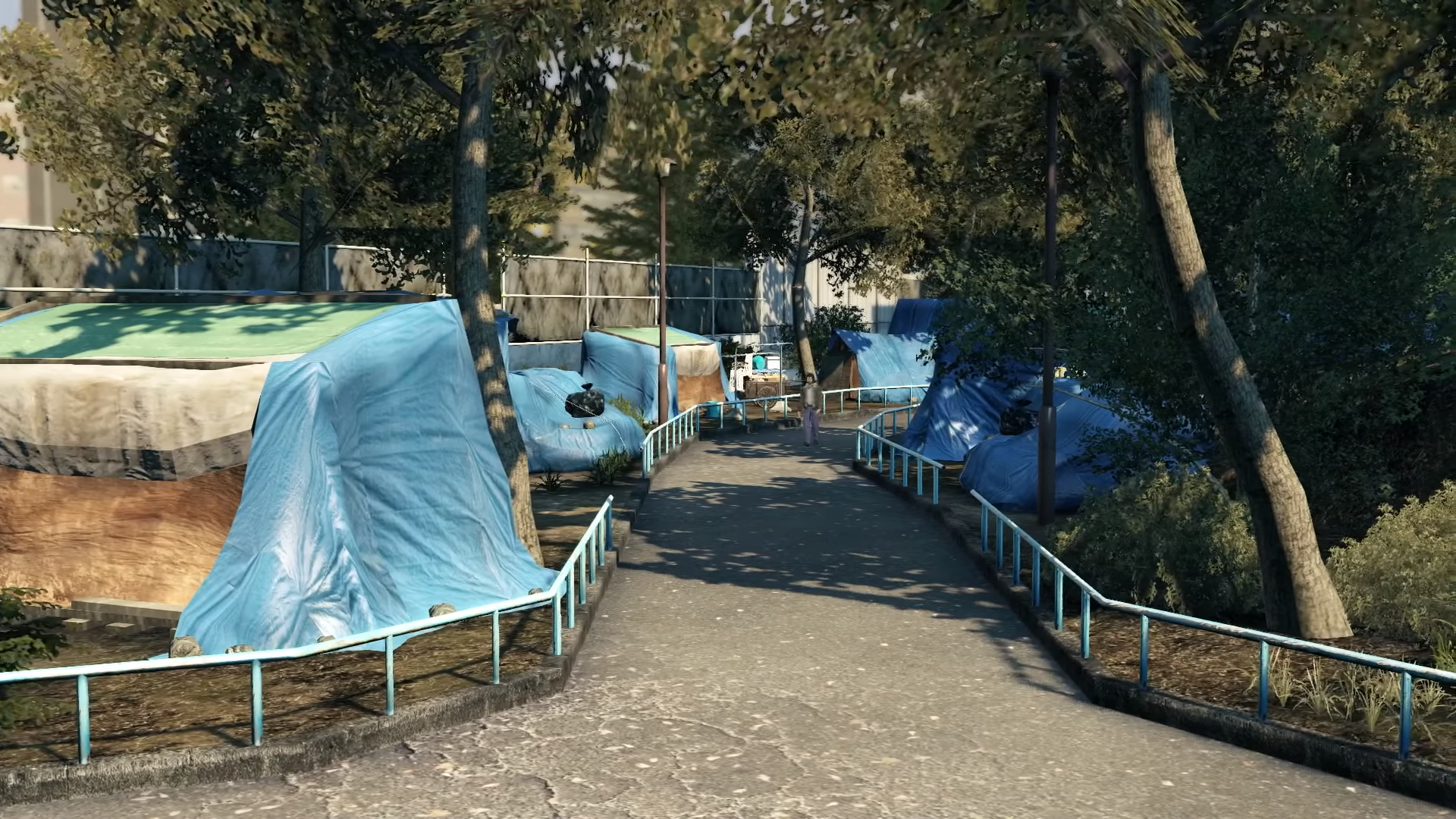 It’s this, and Kiryu’s general attitude towards the homeless throughout the games, that sticks out among the media’s typical portrayal of this group of people. In all of Kiryu’s interactions with the homeless, especially in Yakuza 0, he never looks down on them. He views them as people, just as valid as the other citizens of the bustling district. The residents of the park “town” don’t want to be bothered, and they try not to impose on the other citizens, unless they’re getting paid for it. While others in Kamurocho may see the homeless as tramps, or resources to be exploited, Yakuza as a series doesn’t reinforce these attitudes as a universal truth. Instead, we often see humanity in the less fortunate, and are shown that the homeless are also people.

It also helps that the homeless population in Kamurocho actually reflects the homeless population in Japan. Many of the homeless in Japan are either elderly men, unable to get a job due to ageism, or unmarried men that are thought to not work as hard because they don’t have a family to feed. Talking to the homeless in the park and around the town in Yakuza reveals a plethora of reasons for their homelessness. Some cannot find steady enough work, taking odd jobs from yakuza and others to survive. Others are victims of their alcohol addiction, although whether or not that addiction developed before they were homeless isn’t known. Still others just enjoy the freedoms that homelessness provides, not having to be a slave to a paycheck and rent.

But the series just presents these tales without judgement. Kiryu doesn’t have any inner thoughts about the homeless, and he does not stand for anyone being mistreated, regardless of their societal status. He doesn’t ignore them or try to distance himself from them in disdain. We need more portrayals like this in media, so that we can move beyond the negative stigma society has for those less fortunate. When we view the homeless with less disdain and more empathy, we can finally take strides in helping them and begin tackling the systemic issues that cause someone to lose their home.

Elizabeth Henges is an accountant by day and writer by night, and is based in Florida. You can follow her on Twitter @gaiages for gaming hot takes and cat photos.