Final Fantasy XIV is prepping for a new expansion later this summer. The lead-up to this expansion, Shadowbringers, has brought new classes like the Blue Mage, and will soon open worlds with the ability to visit other servers. Kotaku emailed questions to game director Naoki Yoshida (a.k.a. “Yoshi P”) about new job classes, whether or not world visits could shake up economies, and what multiplayer games he’s keeping his eyes on these days.

On the introduction of Blue Mages:

Naoki Yoshida: The Blue Mage is only able to acquire balance because it is what we now call a “limited job,” and there are no plans to remove the limited aspect from the job.

However, we do plan to raise the level cap on the Blue Mage—and this doesn’t necessarily have to be timed with an expansion release. So at some point during the 5.x patch series, players can expect new blue magic which can be acquired, additions to the Masked Carnivale, and even new content to tackle.

I would say we are only at the “So You Want to be a Blue Mage?” chapter in the overall journey for this job—there is a lot of future blue mage content in the pipeline for our players to enjoy. 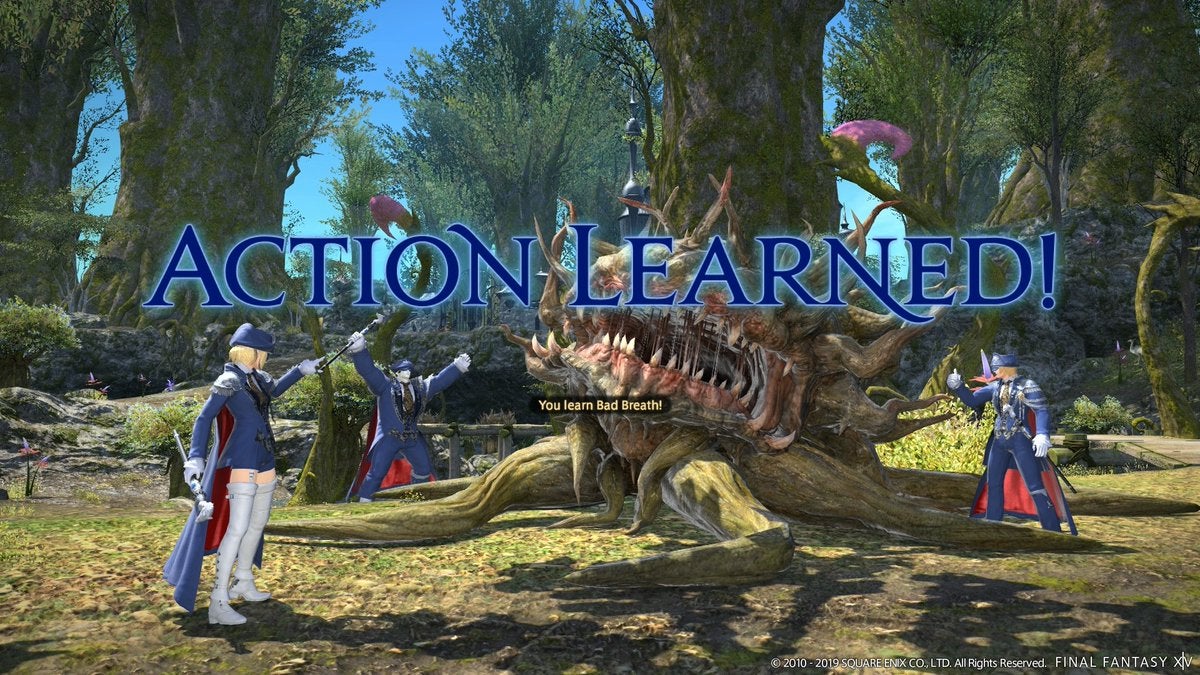 On the idea of “limited” jobs:

Heather Alexandra, Kotaku: But how do you decide what is or is not limited? For Blue Mage, it seemed to rest in how difficult it was to control when players unlocked certain skills. Is there another job that you want to have in-game but only see working as a limited class? Beastmaster, for instance?

Yoshida: The process of developing one of these jobs doesn’t start with us asking ourselves what will be the next limited job. We are, however, mindful of two things: ensuring both that the job or job type we implement will be enjoyed by the players, and that it will make for an interesting and fun experience. During this process, if we come to a potential job that we feel may not necessarily fit well within standard party gameplay, we will then consider whether or not we make it a limited job.

With Blue Mage, for example, we run in to the issue where learning monster actions is the main pillar of the job, but we can potentially see a huge disparity in power between Blue Mages depending on the blue magic they have learned—even if their job level is the same. In other words, too large of a disparity in the number of blue magic abilities learned would create issues if Blue Mages were able to queue normally for duties.

Additionally, blue magic is interesting because they are powerful. However, if we allow Blue Mages to queue for the newest raid, we would need to weaken much of the blue magic to properly adjust the class to the fight, and I feel it would be boring for the Blue Mage. To avoid issues, we created this as a limited job—this allows us to circumvent the problem but still have an enjoyable job.

By utilising this concept of limited jobs, I feel that it could potentially open up possibilities to explore the addition of jobs such as like Puppetmaster and Beastmaster.

On comparisons to Final Fantasy XI and making a “modern” MMO:

Yoshida: Whenever we compare FFXI with FFXIV, I believe it’s important to have a knowledge of the history of the MMORPG genre. FFXI is a part of the first generation of MMORPGs, and the game itself is structured heavily on a “time to win” model. There is the assumption that players will spend huge amounts of time in-game, and therefore the game world provides the freedom to adventure without guiding the player through it.

However, because you have the freedom, people end up getting lost, or just spend a lot of time travelling between locations. Furthermore, there was the aspect of not being able to progress through almost all content without a party. This type of gameplay experience continued for quite some time [in the MMO space]. Although this did create some very strong experiences and memories which helped to drive the development of the MMORPG genre, it also created an issue on the opposite end of the spectrum: players weren’t able to actually play the game because they couldn’t dedicate the time.

When we were redesigning FFXIV for A Realm Reborn following the failure of FFXIV 1.0, I had a very strong mindset to make A Realm Reborn the final game of the second generation of MMORPGs. Modern day gamers are very busy, and time has become far more valuable than money—many forms of entertainment, not limited video games, are now vying for players’ time. Keeping that in mind, the base of FFXIV is built upon providing a high-quality experience for players, even if they are only playing in shorter sessions. On top of that base, we create content that provides the opportunity for those who wish to spend more time playing, but never making this a mandatory experience. This is the difference in gameplay experience when comparing FFXI and FFXIV.

I grew up heavily immersed in first generation MMORPGs myself, so I would like to have the opportunity to create a game that fits that mold, but I’m certain it would be tough to sell in this day and age…

On the upcoming World Visit system and whether or not it might affect server economies:

Alexandra: I know some players who are worried that their servers might see a rise in bots when the gates open. Is the team doing anything to prepare for these sort of things and combat this in the future?

Yoshida: I believe there is no doubt that the economy will show some fluctuation, but I don’t think farming bots would suddenly increase in number across all the worlds. Unless there’s a sudden surge in the number of players, supply and demand should not change drastically. The game economy will show increased activity at first, and I think players will jump from world to world to sell and buy items. However, each of these economies will establish a price point within in the market, and the initial fluctuations should stabilise.

I am honestly a bit more concerned about fluctuations in the market price being very severe over a short amount of time rather than an increase in bots.

As an aside, we have always been applying countermeasures against bots, and as we report to our players each week, we continue to ban thousands to tens of thousands of characters that are determined to be taking part in these activities. We will continue to do our due diligence to mitigate this type of activity. 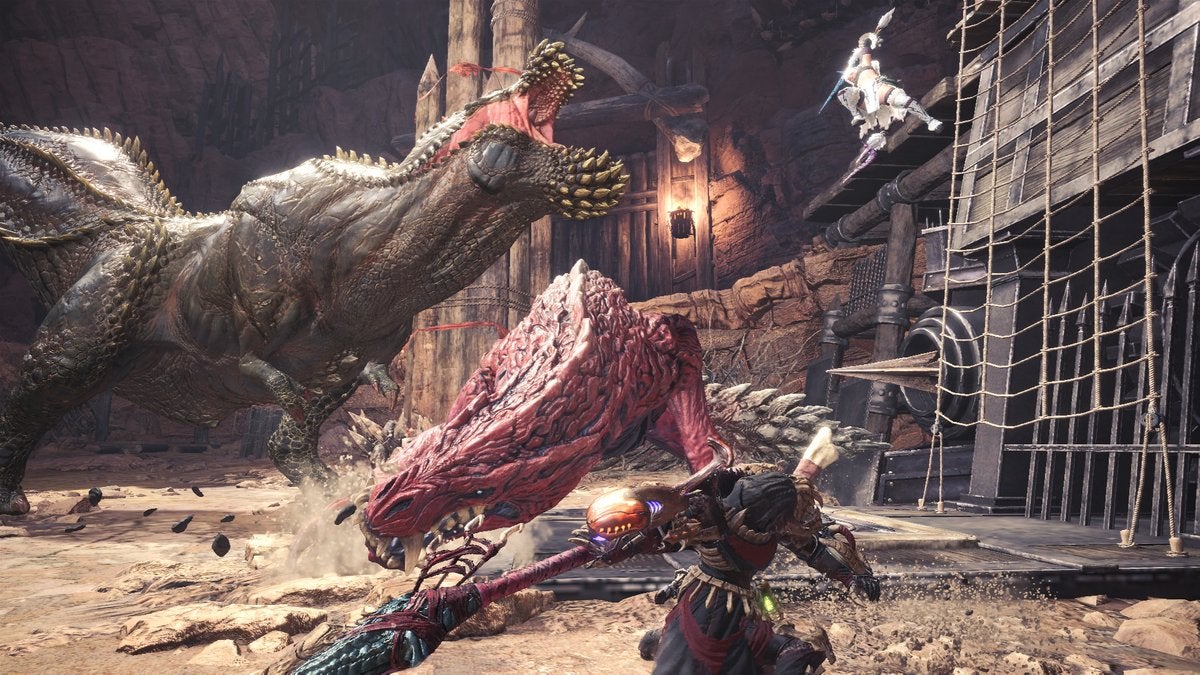 On the other multiplayer games he follows:

Yoshida: I regularly check out all varieties of online games, but currently feel that Monster Hunter: World has great potential. The ease of content matching and the unique gameplay experience that almost instantaneously provides excitement works very well within the current gaming era, and I feel that there’s even greater potential for the title.

One other strong example would, of course, be the World of Warcraft. Looking at the various challenges they took on with their latest expansion package, I feel they have a certain foresight that can look even a few years ahead, and continue to stay strong.