Apex Legends might have a boring name, but it’s a lot of fun to play. Respawn’s battle royale ditches Titanfall’s giant mechs but plays around with the genre in exciting ways. It can be daunting to start up any new game, especially a battle royale. Here are some tips to help you find your bearings and kick some ass.

Don’t Worry About The Lore

Titanfall 2 is one of the best shooters of the last decade, full of smart level designs and a wonderful giant-robo buddy. While I think everyone should play it, you don’t need to know the story to play Apex Legends. They’re set in the same universe, but the connections are loose at best. Don’t sweat the small details. 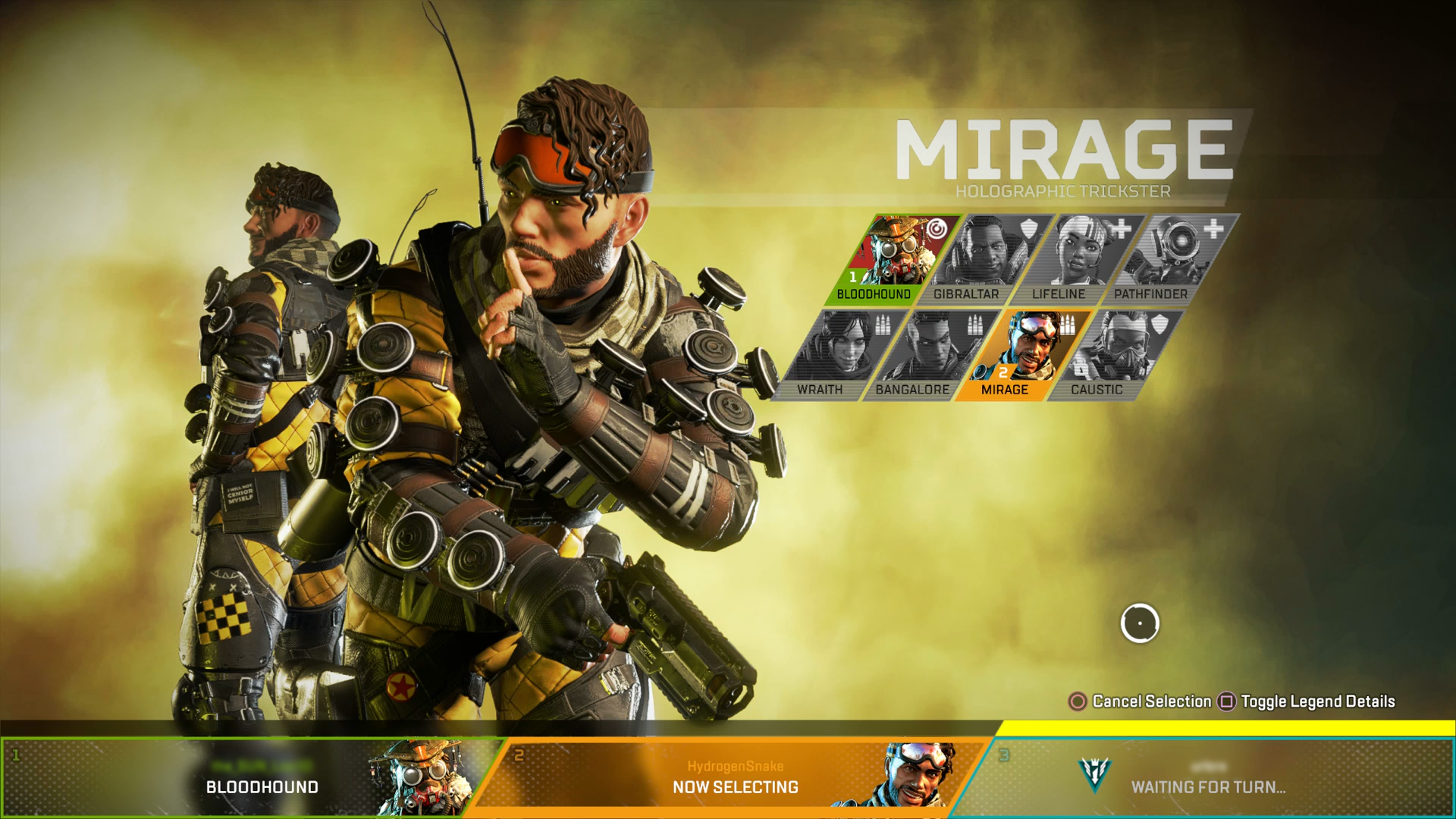 Pick The Legend Who Interests You (At First)

Apex Legends requires you to pick a character to play as at the start of each round. This can be overwhelming when you aren’t familiar with them, so I suggest you pick whoever seems the most interesting. There are some good starting choices: Lifeline is a reliable hero for beginners, as she has the ability to heal. Bloodhound has abilities that allow him to track other players, which is good for avoiding ambushes and pesky campers.

Think About Your Team

You’ll start to get a clearer picture of each character’s abilities as you play. Think about which heroes might work well together. Maybe that Lifeline player could heal your squad better if you were protecting her with Gibraltar’s shield. Think about good ability combinations and adjust your character choice according to who’s picked before you.

When you start a match, you’re tossed into a squad with two other players. Like most battle royale games, you need to drop from an airship onto the map. There are a few differences from other games to be aware of: 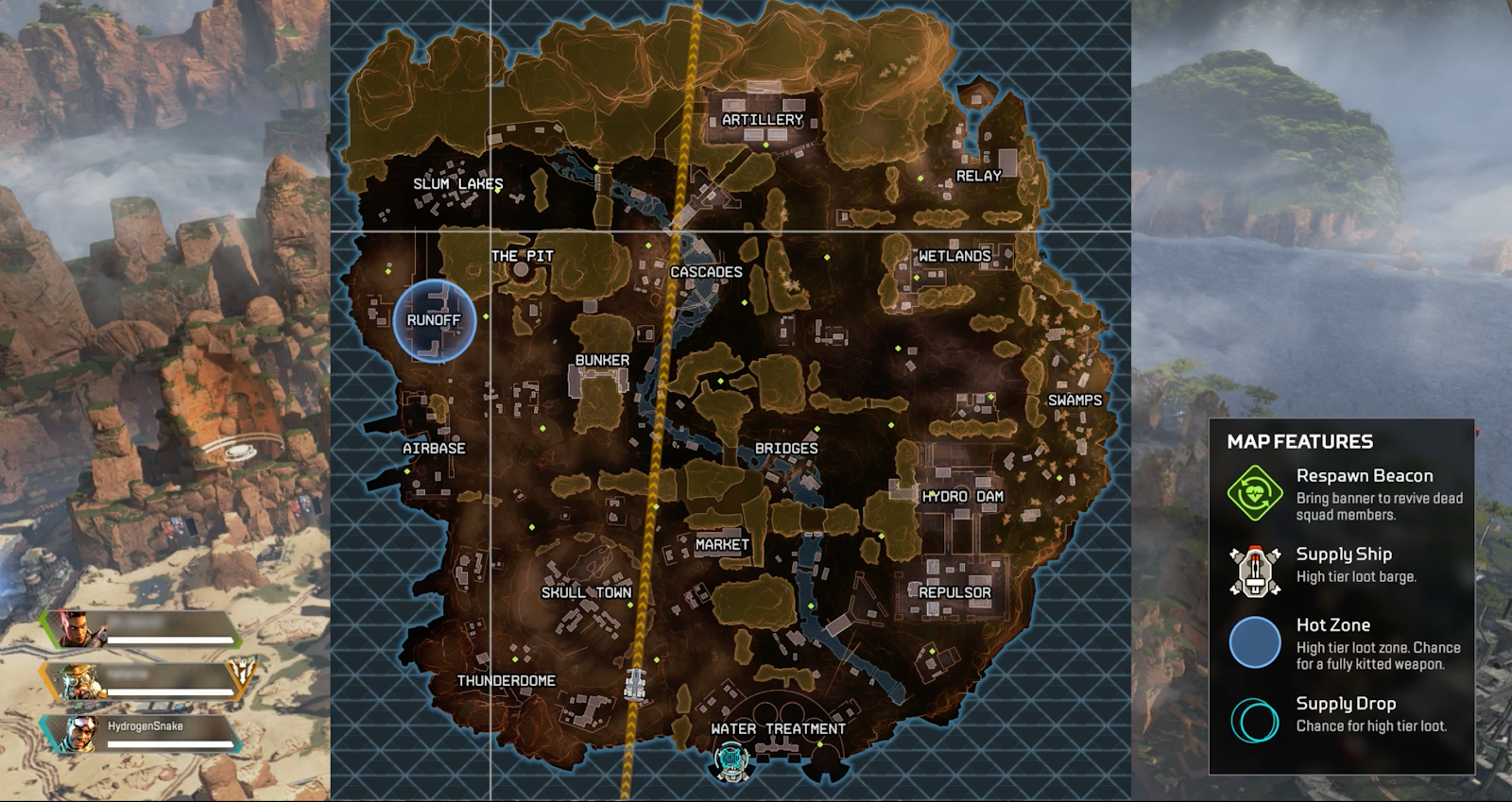 Every area in Apex Legends fits somewhere on the “loot tier,” with certain locations more likely to have high quality gear. You can learn a location’s loot tier by looking under the locations name when you first arrive there. It shows up in the top left portion of your screen. If you are looking for the best gear, consider either the Bunker, the Pit, or the Airbase. These are on the northwest side of the map and all have good loot.

If these areas seem busy, your best bet is to look at safe but reliable locations like the Cascades or Hydro Dam. Play it smart. You don’t always have to drop at the best places to have a chance at winning.

There are two special locations present during your drop that give an abundance of loot. The first is the floating supply ship that travels around the map. It’s small but has tonnes of great stuff. The other is the “hot zone,” a random area marked by a large pillar of light. Both of these locations will stock you up with great stuff, but they also tend to draw crowds.

Grab All The Loot

Gear matters in Apex Legends way more than other battle royales, especially armour. When you land, you should grab as much as you can of whatever you can. There’s a nifty feature that prevents you from grabbing an item that’s worse than whatever you have equipped. That means you can move fast, not worry about mistakes, and have yourself kitted up quick.

After grabbing tonnes of loot, you’ll probably have extra ammo types or spare medkits. Open up your menu and drop the extra stuff for your teammates. They might need it.

When you’re first starting, you might find yourself overwhelmed by the sheer amount of guns in Apex Legends. They’re all from Titanfall 2, but if you’re not familiar with that game, they can be hard to keep straight. My advice for newbies is to learn what type of weapon each gun is. Is this a shotgun? Is that a sniper rifle? Knowing that goes a long way to helping you pick up the gear you want, especially during a hectic drop.

If you’re mic shy, Apex Legends has a simple and extremely useful communication system to help you coordinate with teammates. If you press the R1 button on Playstation 4, right bumper on Xbox, or the middle mouse button on PC, you can mark a location. However, you can use the button for a lot more:

As an additional note, be aware that you can still do all of these things even when you are downed by an enemy. Always be communicating.

Some battle royales emphasise a slower pace, but Apex Legends is best played fast. Be on the lookout for ziplines that can traverse large gaps and balloons high in the sky. If you zip up to those, you’ll get a boost and can dive for extra distance.

Sliding Is Fun And Useful

You can slide if you crouch while sprinting. This is good for gunfights but even better for moving around the map. If you see a slope, slide for extra speed. 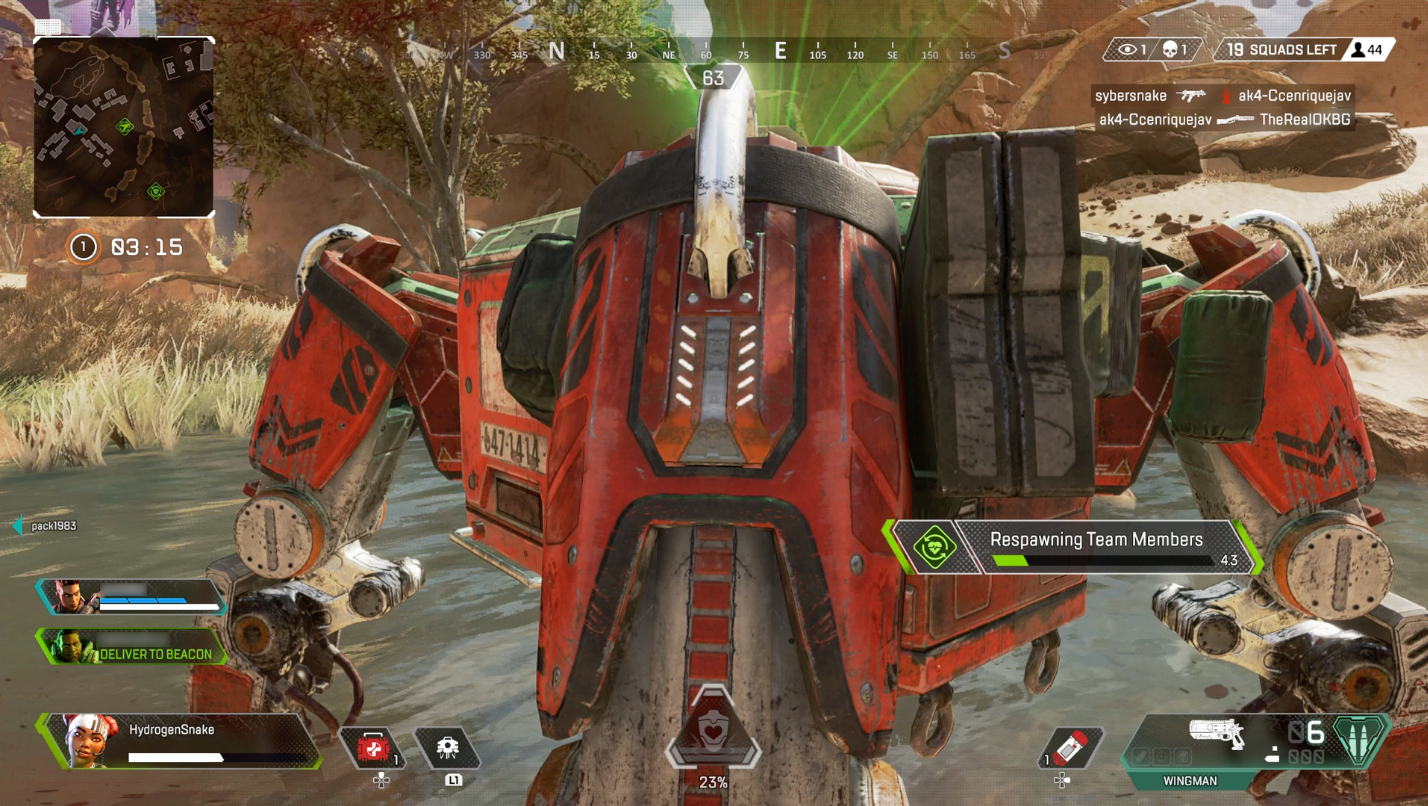 You Can Revive Fallen Teammates

If a squadmate dies, they leave behind a banner that you can pick up. It’s only there for a limited amount of time, but if you snag it, you can bring the banner to any of the respawn machines marked in green on your map. This will revive your buddy and get them back in the fight.

Loot Boxes And Coins And Gear, Oh My!

There are three currencies in Apex Legends, which can be used to unlock weapon skins and new characters. Here’s the breakdown:

Crafting Material is found in loot crates and can be used to unlock character skins. You get a loot crate every time you level up. In time, you’ll start to gather enough of these materials to choose the exact character skin you want to unlock.

Legend Tokens unlock new characters and store-exclusive weapon skins. You get them from completing matches, and they accumulate at a decent pace. You can spend these on items from the in-game store, including the limited time items that change each week.

Apex Coins are purchased using real money and are to purchase items from the store, including loot boxes. If you don’t want to spend your money on cosmetics, I suggest you focus on getting the items you want as you go, using the other two currencies.

Battle royale games are intense, and it can be easy to lose your cool or even get angry when you lose. Accept that you’ll probably lose more than you win, and that sometimes you’ll just have some bad drops. Keep cool and go with the flow.

At the end of the day, this is a game. Grab some friends and play for a couple of hours after work, taking pride in each new accomplishment. You’re going toget better with each round until you are the Apex Legend!