Razer Is Making Everything Pink Now, Including Laptops

My love of pink things, specifically pink gaming gear, is well-documented. What began years ago as a convenient colour-coded way to support my older sister’s struggle against breast cancer (she kicked its arse) blossomed into an overwhelming appreciation for the softest, loveliest and happiest of hues. More and more people are catching on to pink power every day, and some of those people are fans of Razer stuff. Those people should love the new Quartz line.

I mean, look at this thing: 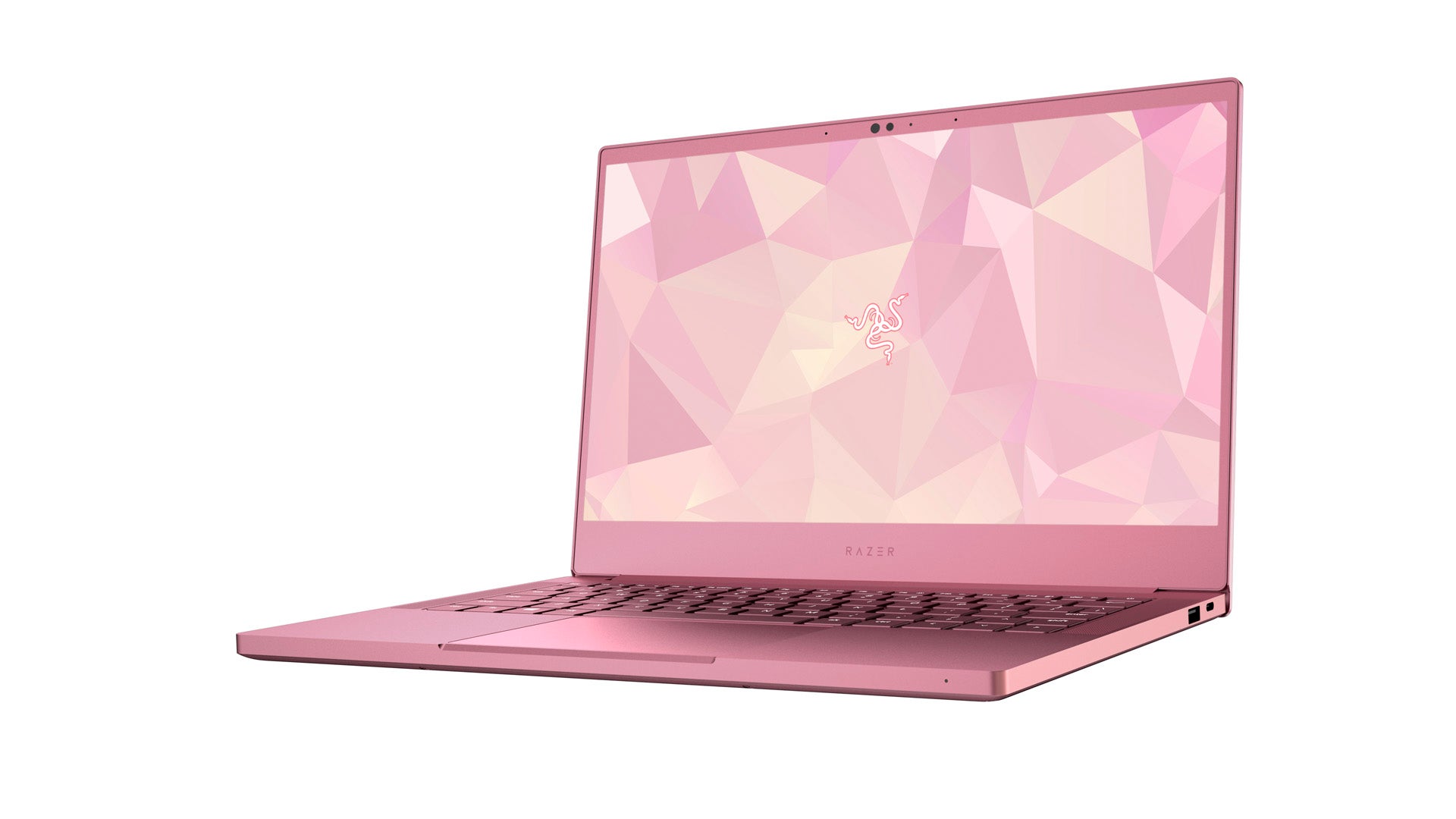 Okay, so it’s not a dedicated gaming laptop like the Razer Blade or Razer Blade Pro. The 13-inch Stealth is more of a productivity laptop. But where the original black Stealth or the newer gunmetal or white variations, there is nothing understated about the Valentine’s Day limited edition. It is pink and shiny and it’s got a lovely red Razer logo below the screen. 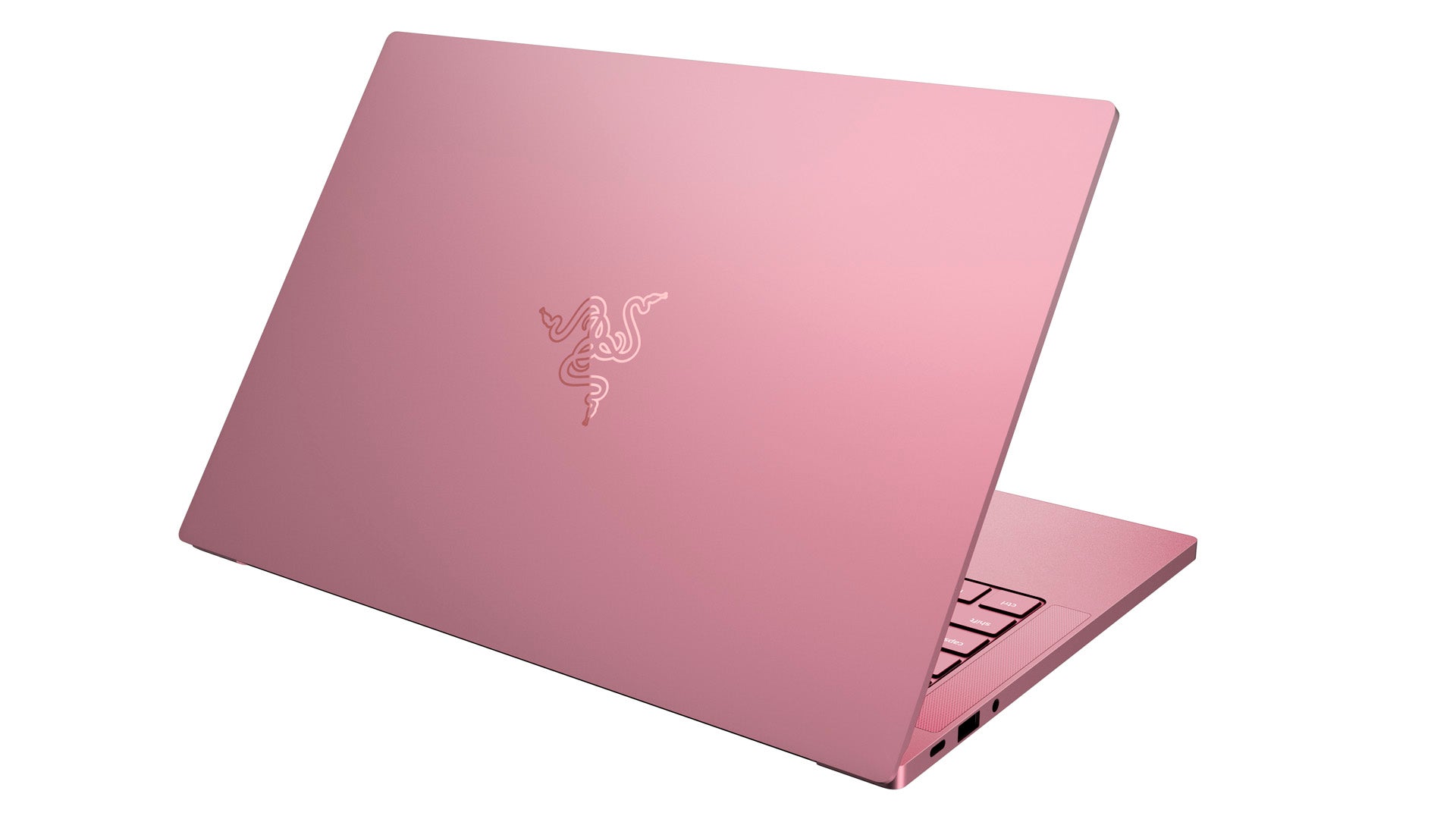 There have been other pink laptops. Some are gaudy plastic trash. Others do the whole Apple “rose gold” thing. Screw rose gold in its stupid rose gold face. 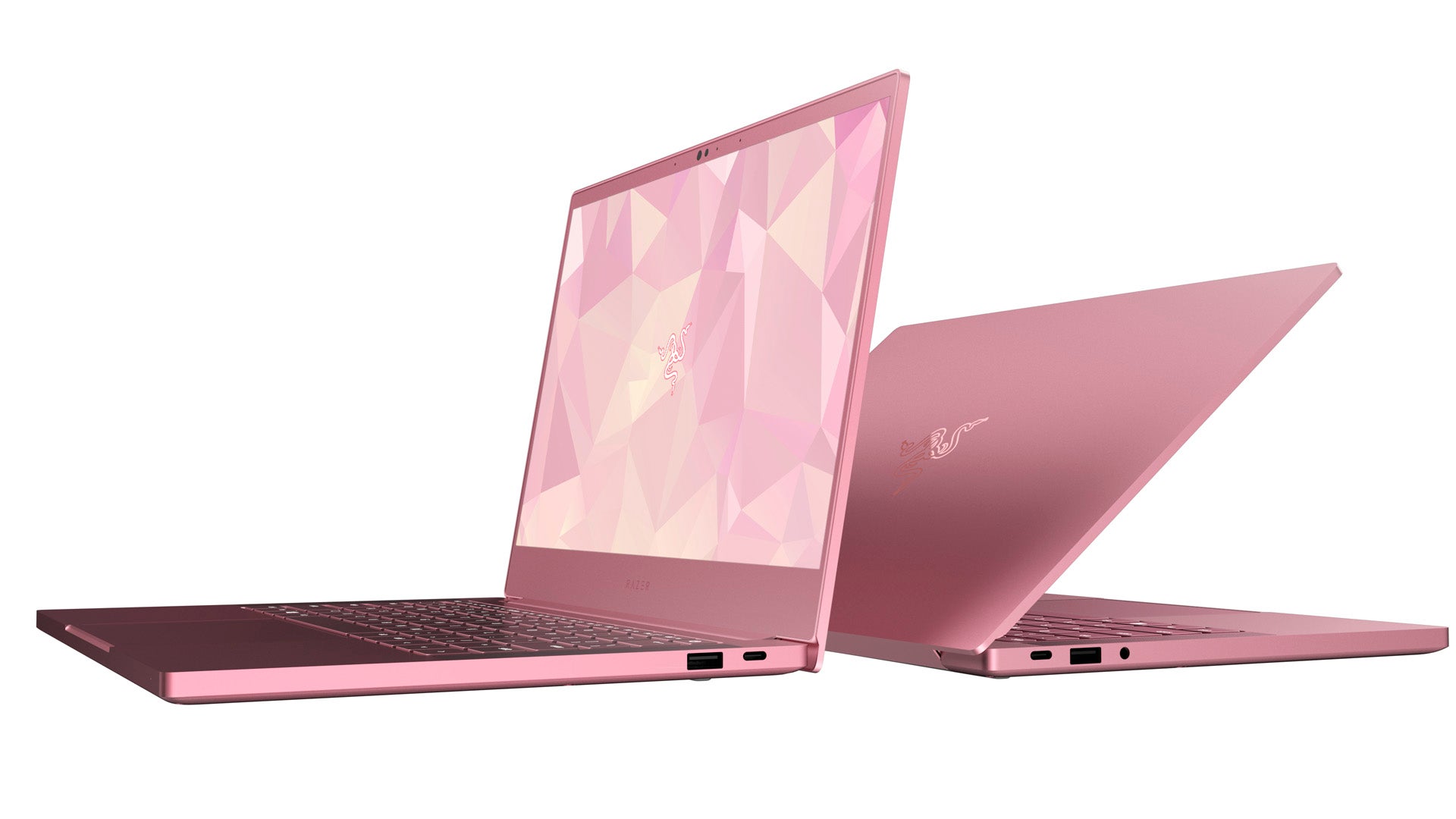 Again, not a powerhouse, but pretty tough for a super-thin, three pound notebook. It’s got Nvidia GeForce MX 150 4GB graphics, 16GB of dual channel memory and an 8th generation Intel i7-8565U processor. It’s going to spread the hell out of some sheets. The limited edition pink Razer Blade Stealth goes on sale today for $1,600 (£1,218) in the US, Canada and China.

The second coolest new pink thing from Razer is the pink version of the Raiju Tournament Edition wireless PlayStation 4 and PC controller. With its re-mappable buttons (it’s got its own mobile configuration app) and adjustable sensitivity options, it’s a very versatile controller. It’s only available in Europe, Asia and Oceania, so if you aren’t there you’ll have to import the £150 controller elsewhere. 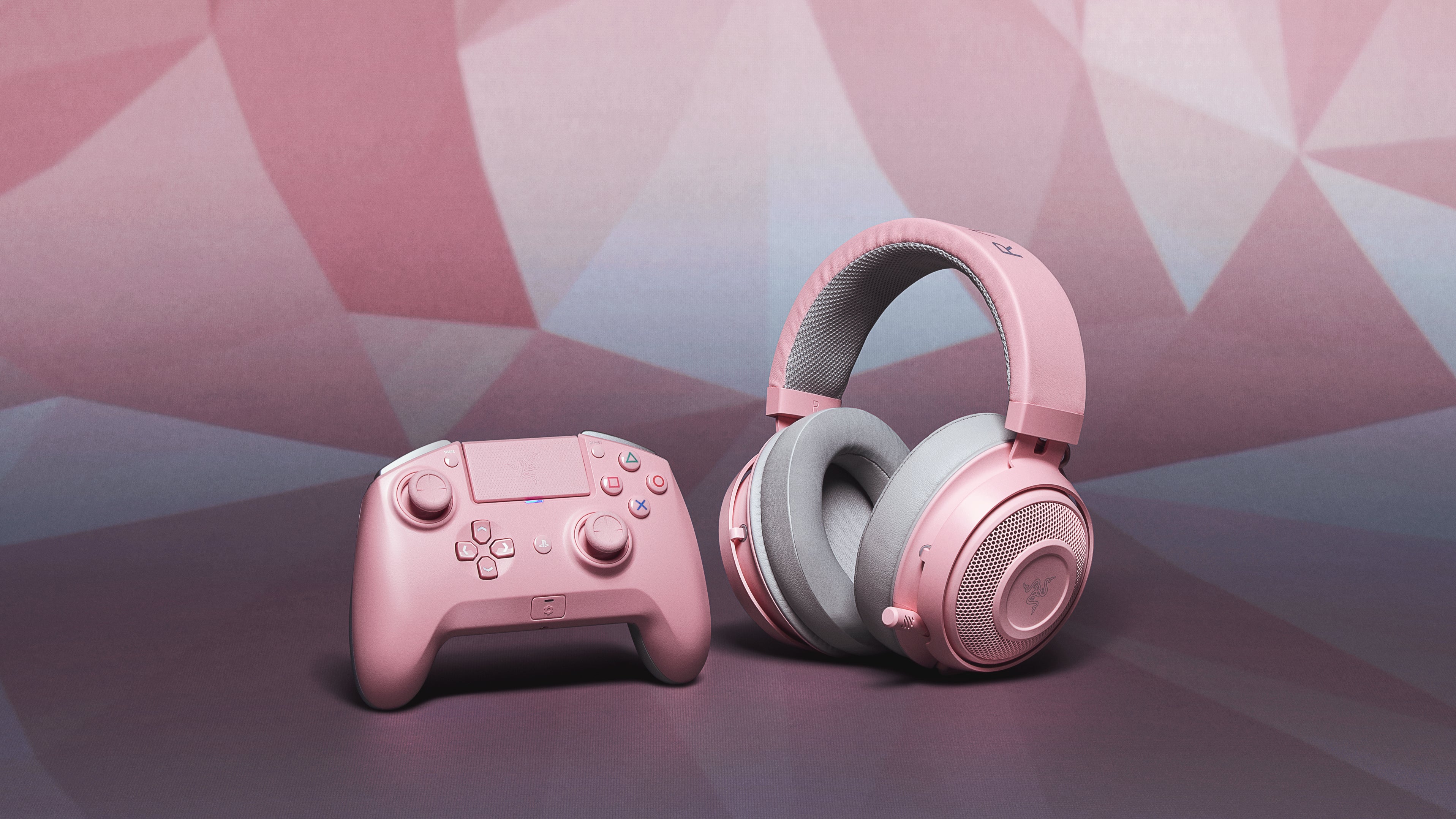 But that’s okay. The pink third-generation Razer Kraken headset (£100) should be available everywhere, as will the pink version of the Razer Seiren X microphone (£100) and the handy pink Base Station Chroma (£60). 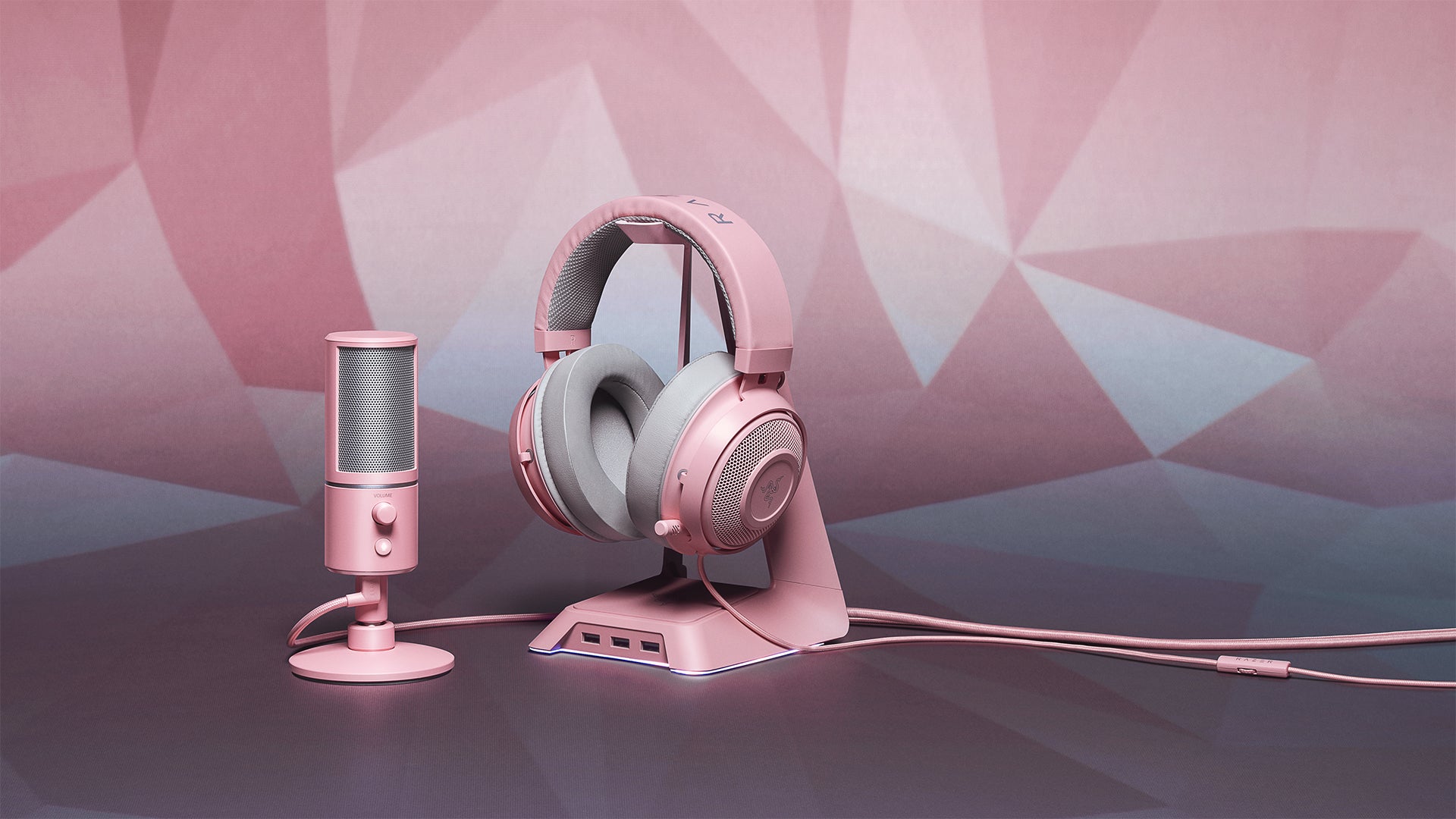 Finally, we’ve got the new additions to the Quartz keyboard and mouse lineup. There’s a pink version of the Razer Huntsman (£150). It uses optical switches for faster response, interrupting a beam of light to register a keystroke rather than hitting mechanical contacts. The Razer Basilisk (£65) is a nice all-around mouse that will do until someone releases a pink trackball. Finally there’s the Goliathus Extended Chroma, a £60 keyboard and mouse surface that’s mostly grey, so it doesn’t really count. 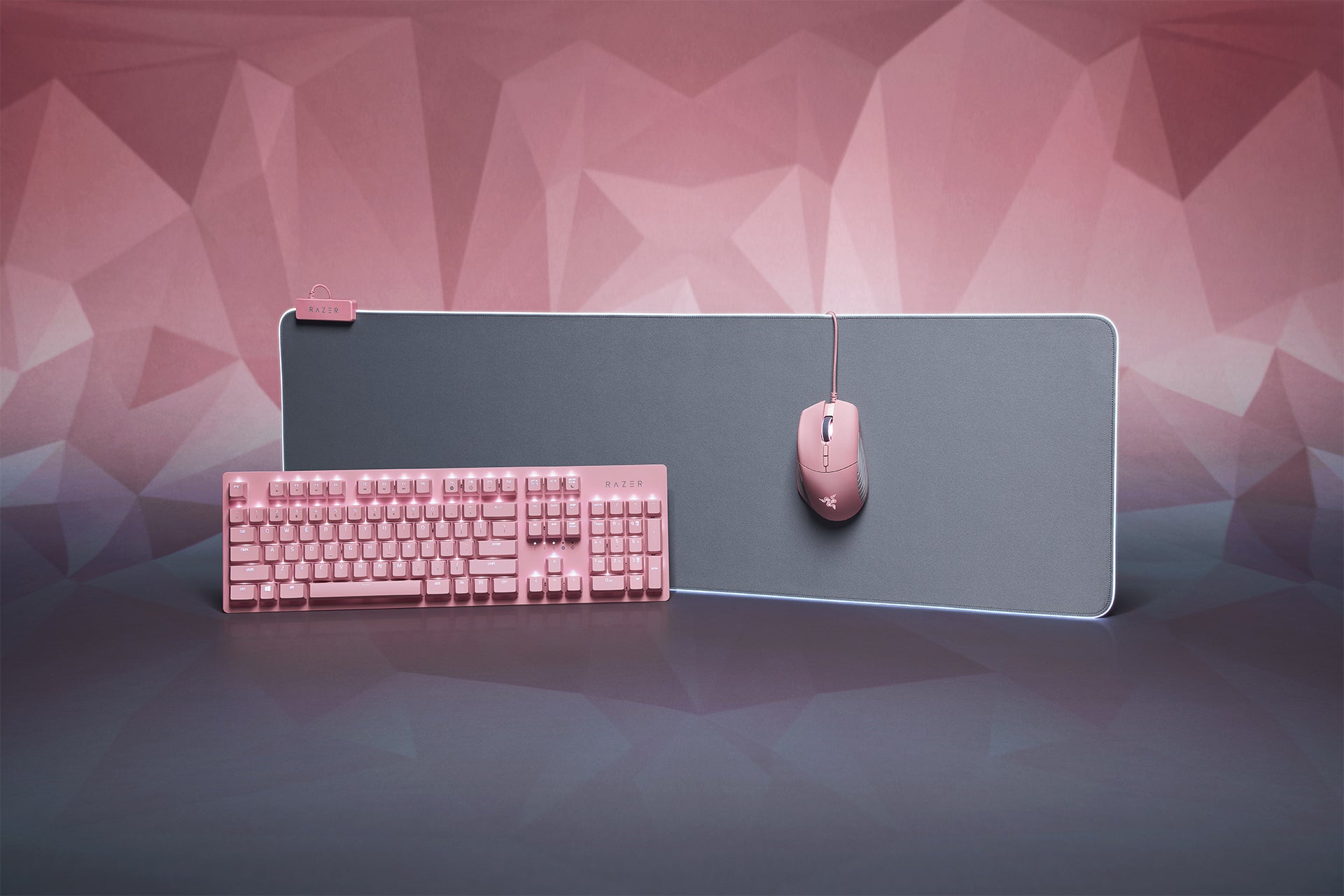 Oh, and there’s a pink case for the Razer Phone 2 in the picture up top, but that’s a very specific thing for very specific people, none of whom I know.

The takeaway here is that if enough of us pink fans make enough noise, eventually everything will be pink and we can finally take a break to roll around in all of it. Read more about Razer’s extended Quartz line over at the official website.