For the last 41 days, a Twitch user named Mosheddy has been persistently harassing a streamer named Tanya DePass. She quickly banned him from her channel, but now he lurks, follows her to other people’s Twitch chats, sends private messages to everyone he can, and has friends drop into chat with messages “from Mosheddy.” Twitch hasn’t banned Mosheddy, and DePass doesn’t know what to do.

Tanya DePass is a streamer, consultant, and director of a non-profit called I Need Diverse Games. DePass feels like she’s being stalked, she told Kotaku over the phone last week, and she can’t do anything about it because bans administered by Twitch streamers don’t prevent people from watching their channels or seeing who’s in chat. Whenever she streams, she can count on people in her community getting creepy DMs, either from a person who goes by the handle “Mosheddy” or his friends, some of whom have created accounts that specifically mention Mosheddy to taunt her. Other channels DePass has hosted, sent her community into using Twitch’s “raid” feature, or even just decided to watch on her own have also ended up being trolled by Mosheddy and his sympathisers.

“It got to the point where streaming made me anxious. It still makes me anxious.”

This is all happening despite a suite of Twitch tools and a terms of service that should, in theory, enable streamers to curate their communities and experiences—and, most importantly, protect themselves from users they feel threatened or upset by. DePass’ troll has uncovered a series of easily exploitable loopholes. Sure, now that DePass has banned him, he can’t talk in her channel’s chat, but he can still follow it, see who’s in her community, DM them, and tag along any time DePass decides to hit up another channel.

DePass says it’s made her uncomfortable streaming and forced her to lock down a community she once envisioned as an oasis from social media’s endless, landmine-ridden desert.

“No matter what I did, he would follow along,” she said. “Now my Discord is locked down, everyone gets put into a welcome room, it’s subscriber-only Twitch chat, subscriber-only [recordings of previous Twitch streams]. I have to go back and make sure people don’t make weird clips... That’s not the community that I wanna build. That’s the antithesis of what I wanted out of Twitch.”

“It got to the point where streaming made me anxious,” she said. “It still makes me anxious.” 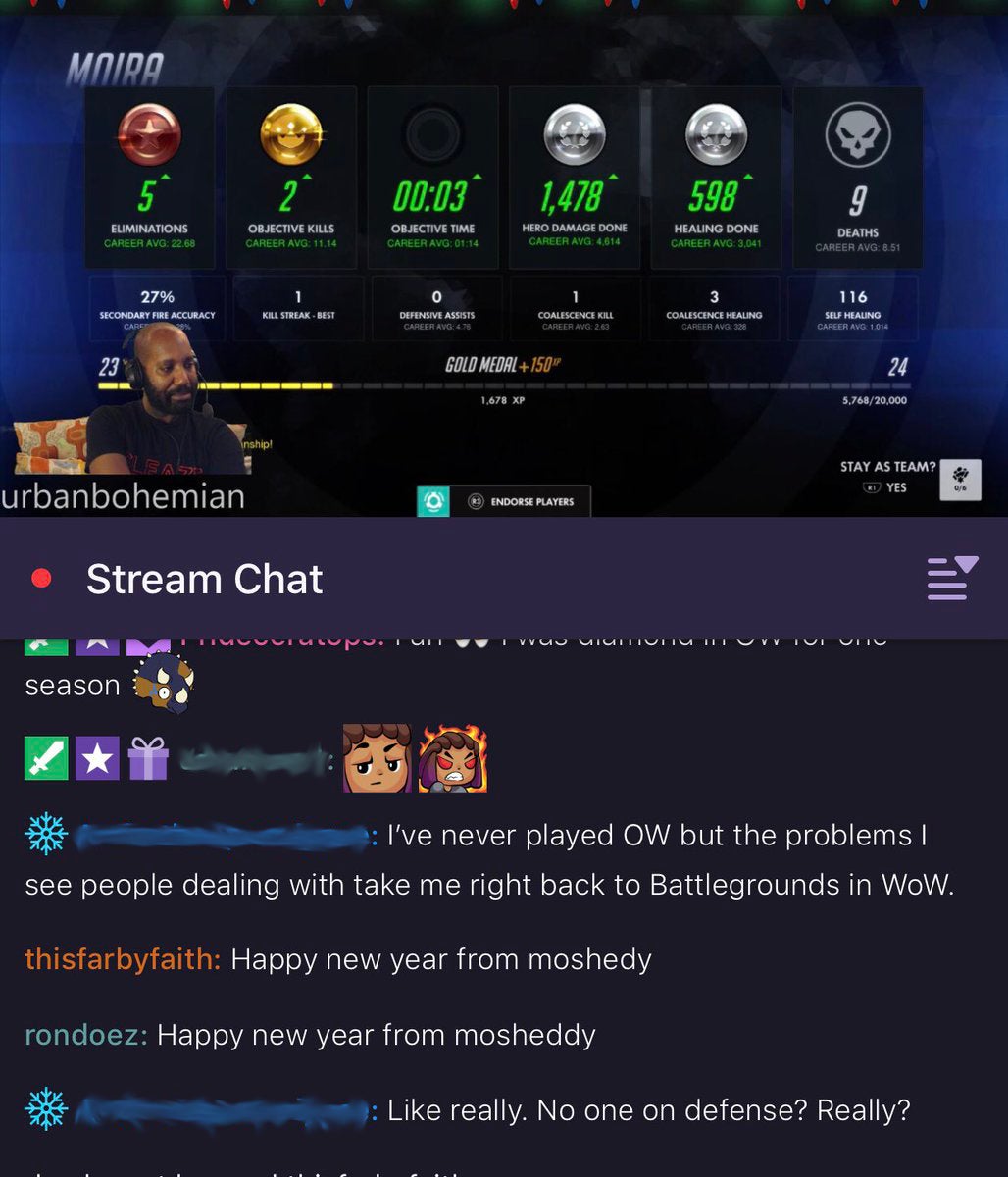 For the past month and change, DePass has been documenting Mosheddy’s near-daily intrusions into her community, posting screenshots of Mosheddy lurking in her channel and sending whispers (private messages) incessantly to her viewers, and his friends posting chat messages like “Merry Christmas from Mosheddy.” She’s reported Mosheddy and accounts associated with him to Twitch, and suggested others do the same. In the absence of results, she’s criticized Twitch for not doing more to prevent this sort of situation from arising. And while one of Mosheddy’s friends did get banned from Twitch entirely—seemingly for ban evasion via usage of alternate accounts—Mosheddy himself remains untouched. (Twitch generally declines to comment on specific users’ bans and did so in the case of this story.)

DePass is far from the only streamer who’s had to stave off Mosheddy’s incessant intrusions. If Tanya DePass mentions another channel, hosts someone else’s stream, or even watches another channel, Mosheddy follows—into people’s chats, DMs, and follower lists. Blocking and reporting doesn’t help.

“He whispered me on Twitch at some point, accusing me of ‘pulling the race card,’ and made comments about people watching and recording us,” DePass’ friend, streamer Brann “Prideceratops” Stalhjerte, told Kotaku in a DM, speaking about an incident that took place “a week or two” after DePass first banned Mosheddy. “On another date, users came into my own stream and began saying things like ‘Merry Christmas from Mosheddy,’ which had become sort of a popular action for them to take part in,” he said. “When they were banned, they reached out and harassed some of my mod team, who simply blocked and reported.” 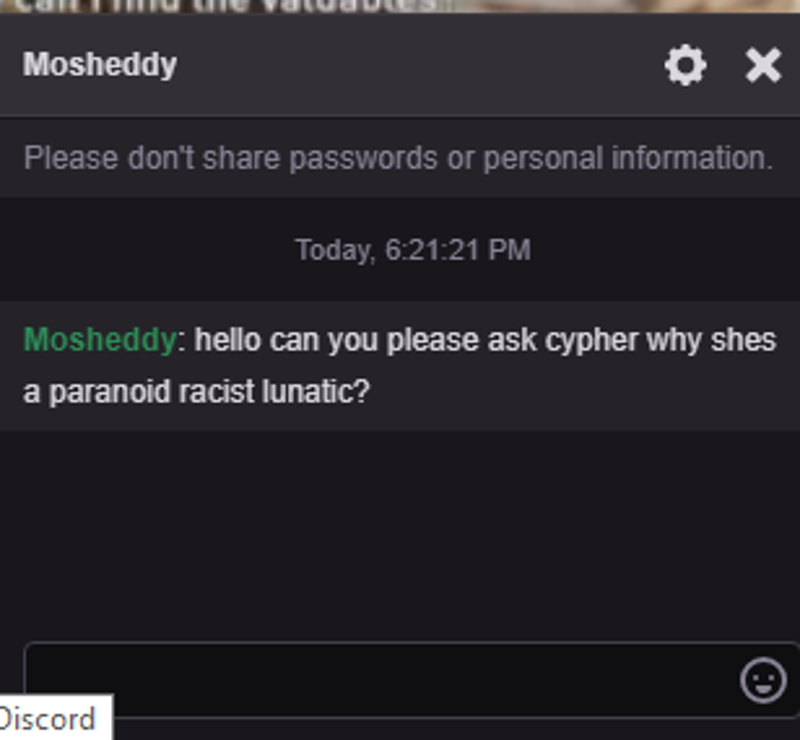 Streamer AcidQueen described a similar incident, complete with the Christmas wishes. First, Mosheddy entered chat right after DePass started watching, greeting everyone with a troll-y message about how he was PewDiePie. When he got banned for that, he proceeded to DM one of AcidQueen’s moderation bots with a snide comment about DePass. “He launched one last barb at me (again, via my bot), claiming that ‘Overlord Tanya has ordered you to stop talking to me,’ when really I was just tired of his sad and pathetic self.”

Twitch partner Brandon “iamBrandon” Stennis was aware of DePass’ situation and decided, in conjunction with his moderators, to ban Mosheddy and related accounts before they could ever chat on his channel. However, on a recent occasion when DePass hosted Stennis’ channel, Mosheddy still showed up by proxy. “Tanya hosted my channel, and a few minutes after, a brand new name in my channel asked specially, ‘Why is Mosheddy banned here?’” he said in an email. Mosheddy himself also DMed people similar messages throughout the stream.

DePass and Mosheddy both said that the incident that set all of this off was DePass banning Mosheddy from her Twitch stream on December 17. Mosheddy and a friend were in the Twitch chat asking DePass why she didn’t use the LGBTQIA tag on her stream. She replied that the tag can serve as something of a signal flare for hateful viewers. Mosheddy and the friend then pushed the issue, and ended up getting banned. DePass said it was for “being rude about the discussion around LGBTQIA tag and harassment” and arguing with her moderators.

Soon after, DePass said, Mosheddy and the friend followed her into another person’s stream and called her “racist,” “toxic,” and “a lunatic” for banning them. At this point, DePass started tweeting publicly about what was happening.

Reached for comment via DM by Kotaku, Mosheddy admitted that he has been DMing people in DePass’ orbit and joining their channels for more than a month. In his view, it’s all perfectly justifiable, although his justifications don’t hold much water.

“I did stop multiple times, but was invigorated to continue when reading her crusades on Twitter,” Mosheddy said. Even putting aside the fact that “stopping multiple times” is synonymous with “continuing,” it’s not on DePass to stop talking about trolling in the hopes of getting the troll to go away.

Mosheddy said he also kept up the messages to DePass and her friends because of the reactions of “random” strangers. “Reading comments from random people who would never know me or even want to hear my side of the story, saying they wanted to break my fingers,” he said. He also pointed out to Kotaku that he had not dropped any racial slurs or sexist comments to DePass, who is black, as if this was some gesture of graceful composure on his part: “And yet I was still able to keep my composure and not say anything racist or sexist towards her, which is apparently her justification for banning me,” he said.

Mosheddy cited many more questionable motivations throughout our conversation, including that on one hand he was on a very serious crusade to get justice for a friend who DePass had somehow gotten banned from a channel they were a regular in, but on the other, it was all for laughs.

“No one could really answer why this guy still had a channel. He was just skirting the line of what’s actionable.”

“Every person I told the story to found it as funny as I did,” he said. “It’s not difficult to send a message with my name in it, get banned, and then follow afterwards.”

Does Twitch find it funny? Probably not, but it certainly hasn’t taken any action. As Mosheddy’s crusade to troll DePass and any of her friends or associates went went on and on with no resolution, DePass took a step that few streamers are able to: While in San Francisco for business earlier this month, she went to Twitch’s office to discuss the matter in person with its Trust and Safety team. She came away from the meeting, she said, with more questions than answers. 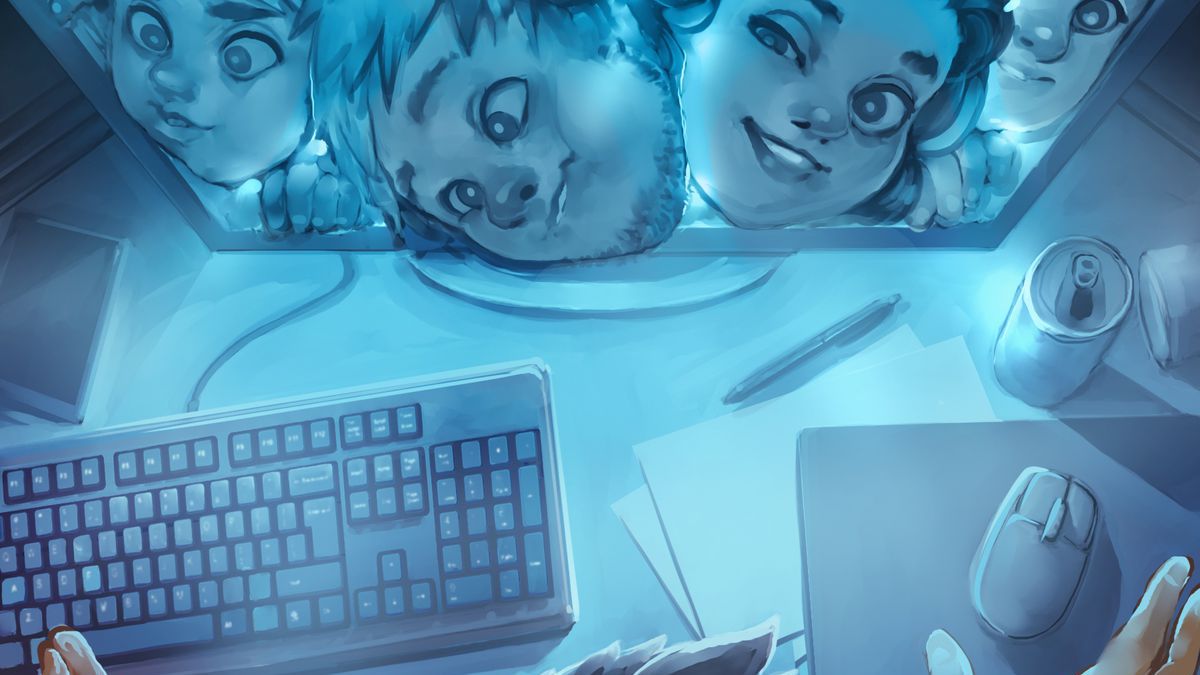 “No one could really answer why this guy still had a channel,” said DePass. “He was just skirting the line of what’s actionable.” She thinks that if she was a bigger streamer, things might be different. “It’s not like I make Twitch thousands of dollars a month, because I’m sure if I was a white dude playing Fortnite, PUBG, or some other game making them money hand over fist, this wouldn’t have gone on for hours, let alone a month,” she said.

DePass worries that her community and mental health are fracturing, and is considering heading for less Twitch-purple pastures, like Mixer or YouTube, even if that means losing followers and subscribers. “I do love streaming,” she said, “but I don’t love anything enough—be that the work I do as a diversity advocate at a non-profit, streaming, whatever it is—to sacrifice my mental health and well-being.”

DePass wants to see Twitch take its tools and terms of service more seriously. Even though Facebook is a sputtering toilet explosion in countless other ways, she wishes others would learn from its block system. “Banning needs to be more than ‘You just can’t talk in a channel,’ she said. “I wish it could be like Facebook, where if you block someone on Facebook, they don’t exist anymore. They can’t find you, they can’t search for you, they can’t interact with you, even if you still have people in common. It’s like you don’t exist.”