Call Of Duty's Latest Microtransaction Is a Tiny Red Dot

For a game that’s already taking heat from its player base for the price of its extra cosmetic items, Black Ops 4's latest offering seems especially difficult to swallow. A red dot reticle showed up in the Black Ops 4 Black Market on 25 December, wearing a price tag of 100 COD Points, or about 90p.

That price tag may not sound like a big deal for some, and charging for a basic dot to use on the Reflex sight attachment is laughable at best. However, Activision’s overall microtransactions strategy for Black Ops 4 isn’t landing well with all members of the Call of Duty community, and the dot is just another straw on the proverbial camel. 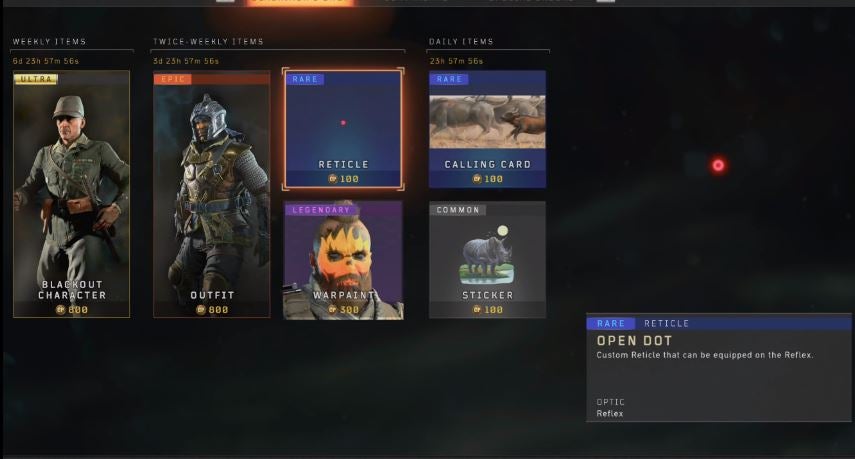 Many people were also disappointed that items they purchased from the Black Market at the end of December were quickly discounted at 50 per cent off days later. The Black Market contains items such as skins, emblems, and camos that are updated weekly, bi-weekly, and daily. One recent pricey weekly item was the Takeo Blackout character skin for 800 COD Points, which was marked down to 400 COD Points just a few days after being added to the shop.

I play a lot of Blackout, and I was initially eager to get the skin, but my indecisiveness paid off. I waited, saw the half-off sale, and jumped on the deal. To everyone who purchased Takeo right before the Black Market updated with the discounted price, let me just say: ouch. Call of Duty YouTuber PrestigeIsKey had a pretty heartfelt rant on this issue, and other players have voiced their displeasure via Twitter.

Adding insult to injury for Xbox One X players, an update on 18 December created an issue with Blackout freezing or crashing on Xbox One X consoles, if the player managed to survive late into a match. When the Call of Duty Twitter account tweeted about the Black Market sale and holiday Double XP event, there were some angry tweets that demanded a fix and extension for the event. Treyarch finally released an update on 3 January, addressing the catastrophe plaguing the Xbox One X consoles, but those players had already missed out on earning double XP. They could still buy reticles and new character skins, though.

Now that Call of Duty has entered the battle royale competition and added a Fortnite-style progression system for earning gear, Activision might want to take notes from Epic Games in terms of how the cosmetic content should be handled. Being hit up for 90p for a new reticle feels a little money-grubbing in 2018's best-selling £60 game.