We know who’s been naughty now, thanks to Blizzard’s new website outing Overwatch pros for violating the Overwatch League’s rules and code of conduct.

The Overwatch League’s “discipline tracker” is a public list of players who broke league rules, such as by boosting other people’s accounts or being toxic. Next to their infractions, Blizzard lists the punishment due to them. Today is the tracker’s first day online and, already, seven pros have received suspensions or fines before the next season has even started: 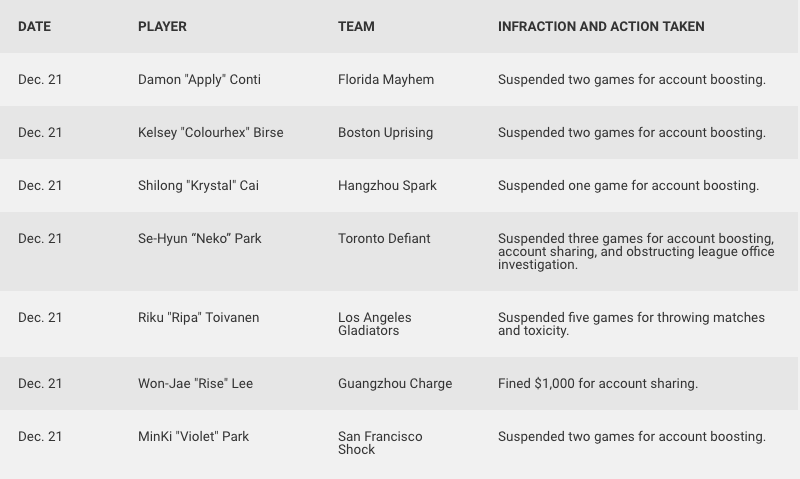 The Overwatch League previously released single posts when a player had done something bad. Now, there’s an official catalogue of evil deeds!

“As players join the Overwatch League, the league office conducts a full review of their conduct and, where appropriate, takes disciplinary action. While the league reviews each case on its own, key factors informing the level of discipline include both the severity and recency of the actions under review. During the season, the league office will continue to evaluate infractions and take action as needed.”

This isn’t totally outlandish for sports—both the International Tennis Federation (ITF) and the Ultimate Fighting Championship (UFC) detail participant suspensions for doping and the like. But in esports, which is still on its path toward mainstream legitimacy, Blizzard’s list seems ahead of its time.

Gaming in front of a huge audience might be many pros’ first job. A lot of them were grinding out their skill rating in LAN cafes and their parents’ houses before they made it big. The responsibility to behave on par with their level of fame may be hard for pros to metabolise at first—but, hey, nothing like a little public shaming to put them in the mindset.