Something Ends, Something Begins

I guess everyone eventually writes one of these posts, and today it’s my turn. At the end of December, I’m leaving Kotaku. I’ll continue co-hosting the Splitscreen podcast, but that’s going to be it.

Starting next year, I’m getting back to my first great passion: competitive hot-dog eating. Kidding! It’s music. I actually never meant to leave music behind to the extent that I have, and never thought I’d be writing about video games full-time for this long. I knew I’d eventually decide to leave, but year after year, I kept finding reasons to stay. I loved working here, loved collaborating with so many talented colleagues, and loved writing for you all. I loved playing and talking about video games every day, and slowly filling in some of the many gaps in my gaming knowledge. Working at Kotaku has been a hell of an education, not just about games but about the world, the people in it, and the ways we all bounce around this wonderfully, horribly interconnected modern existence.

When Joel Johnson hired me to be Kotaku’s Features Editor in 2011, everything was different. The world was different, the site was different; I was certainly different. I had spent my first eight years out of music school teaching and gigging around San Francisco's Bay Area, and was just starting to find my footing as a composer and songwriter. I was working on a second album, then I unexpectedly fell sideways into an all-consuming alternate reality where people paid me to write about video games. There was not, as it turned out, space in that world for much aside from the work itself. Not only did I fail to finish that second album, it took a lot of effort just to keep my back-burnered musical projects above room temperature.

This cover of the Undertale theme was one of the only musical things I actually completed since I started working at Kotaku. There were just too many games to play!

Before I took this job, I thought I knew a thing or two about writing blogs on the Internet. Then, on my first week here, I watched Luke Plunkett, Mike Fahey, and then-colleagues Brian Crecente, Mike McWhertor, and Owen Good moving at what seemed to me to be supersonic speeds, blogging so much harder and so much faster than I ever would have thought was possible. I was floored.

In those days, Kotaku churned out a new post every fifteen minutes. We each averaged six posts a day, minimum, or something like that. Just find stuff and post it. Fresh trailer for a game you’ve never heard of? New screenshots of a game that won’t be out until next year? Context-free pullquote from a conference talk? Post that shit, along with your critical essays, reviews, and other more labour-intensive stuff. Keep an eye on traffic, because your pageviews are on a leaderboard. Try to avoid typos, but accept that they’ll happen. Don’t read the comments. Six months in, I almost burned out and quit.

In the years since then, thanks in part to the efforts of our editor-in-chief Stephen Totilo and in part to the shifting priorities of various company honchos, things gradually became more sustainable. A year or two into the job, I began to actually edit features. We started running fewer posts and having more time to work on things. Gawker Media, Kotaku US's parent company, became the first digital outlet ever to unionise, and I learned the many benefits of being part of an organised workforce. I did a brief stint as Deputy Editor during which I convinced Stephen to let us drop reductive verdicts from our reviews entirely, though it soon became apparent that I was too far removed from the main office to be an effective manager. After that I shifted to Editor-at-Large, which meant I could basically write whatever I wanted. The privilege of such a position at such a widely read publication wasn’t—and will never be—lost on me. 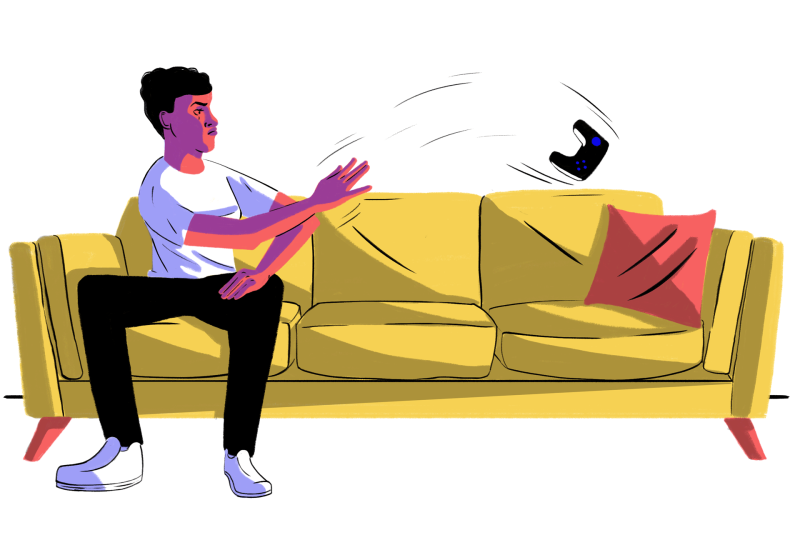 I remain hopeful that some people found my illustrated guide to throwing your controller helpful. (Illustration: Kevin Whipple)

Some high- and lowlights from among the thousands of articles I’ve written for this website: I remember posting an entire 2011 Saints Row preview that rhymed; I remember ending all my other early previews with a haiku. (Puke; puke.) I spoiled a PR-hyped plot point from an Arkham City preview that turned out to be way more of a spoiler than I could’ve known; I felt awful, and learned something important about my responsibility to my readers. I briefly ran a section called “Kotaku Melodic” that gave me an excuse to publish overly esoteric and self-indulgent articles about jazz. (No regrets.) I posted videos of identical twins playing harp covers until more or less every Kotaku reader was yelling at me to stop.

I wrote about video game exposition techniques, mini-maps, the fundamental problem with microtransactions, why video games are better the second time through, life in the age of games-as-a-service, and my complicated relationship with real and virtual guns. I listed the 10 best and 10 worst things about building a gaming PC, and broke down the 16 types of video game according to how they fit into our lives. I wrote tributes to Avatar: The Last Airbender, Hot Fuzz, and Cate Archer of No One Lives Forever, and did my best to figure out why her fantastic game series seemingly vanished off the face of the earth. I loved knowing that if I was dumb enough to squish a bug while it was inside my monitor, I could at least get a post out of it. 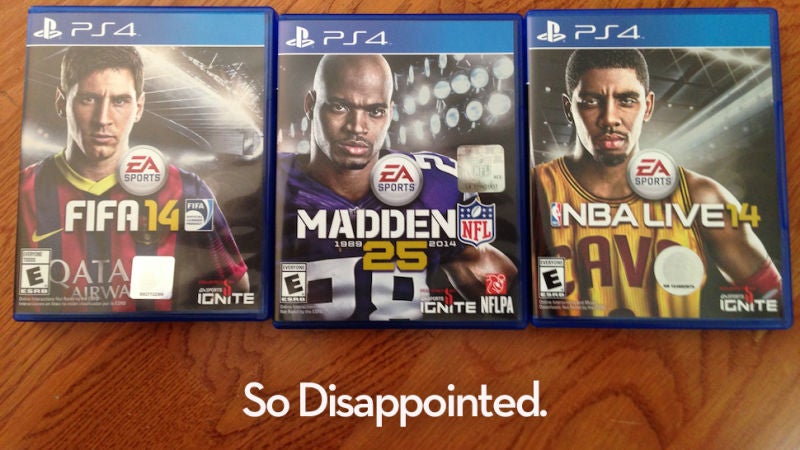 Of all the EA Sportsbros, Kyrie is still the most bummed out about what you did.

I published some lusty Witcher fanfic that I still think could be spun into a full novel (not really) (...but also kind of). My 2012 article about how gameplay and story are exactly like music and lyrics is… actually maybe my favourite thing I published while working here.

I spent countless hours managing Kotaku’s collaborative lists of the best games for every platform, and always got a kick out of moderating my coworkers’ debates over which games should be added and which should be cut. In 2015, my buddy Jason and I started a podcast called Splitscreen; three years and 150+ episodes later, I still look forward to recording each week. 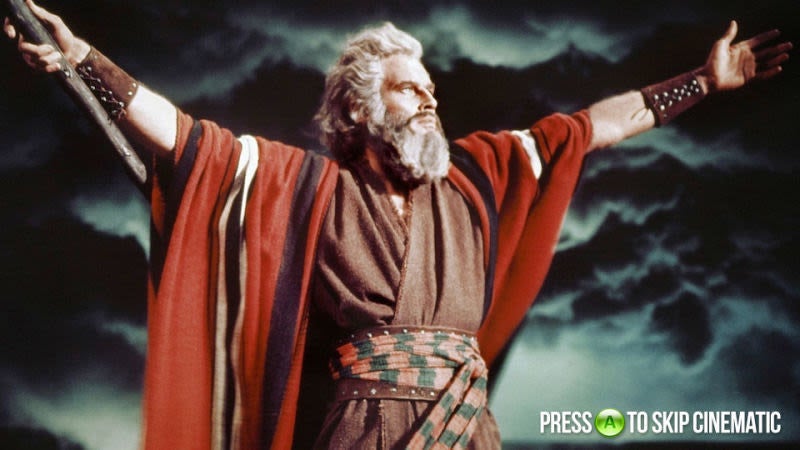 My Ten Commandments of Video Game Menus were awfully presumptuous considering how little I actually know about how to make video game menus, but I stand by them.

I also reviewed a lot of video games. There were the ones I disliked, like The Order: 1886 and Detroit: Become Human, and the ones I loved, like The Witcher 3, Hollow Knight, Journey, and The Last of Us. My favourite games to review were the ones about which I was conflicted in some way: the delights and manipulations of the first Destiny, followed by the ups and downs of three years of obsessive subsequent coverage as well as the complicated social appeal of its sequel; the frightening and occasionally maddening Alien: Isolation; the incomplete yet ultimately calming No Man’s Sky; and most recently, the self-indicting masterwork Red Dead Redemption 2.

The latest version of Kotaku has always been the best version of Kotaku, and I certainly think that’s true of our current lineup. I’m happy that as I’m stepping away, our masthead is as rich with talent and diverse perspectives as it’s ever been. I feel like I could just list everyone… so actually, I will! There’s my friend and creative collaborator Jason Schreier, a stubbornly inquisitive and rigorous reporter from whom I’ve learned so much; Maddy Myers, one of the most eclectically talented and thoughtful editors on the Internet; Chris Kohler, whose wealth of experience and gaming knowledge I’d only admired from afar before he joined us; Heather Alexandra, with her deep love of games and her ceaseless quest for an unexplored angle; Ethan Gach, steady on the tiller with a welcome worldly perspective; Cecilia D’Anastasio, an unquenchable information sponge and relentless reporter; Nathan Grayson, an irrepressible talent with a voracious appetite for interesting stories; Gita Jackson, endlessly fun to talk with, with great taste and a fascination for why people do what they do; Riley MacLeod, a genuinely good person with nearly limitless patience and an eye for unexpected critical angles; Mike Fahey, a lovely man and one of the last true goofballs of the Internet; Brian Ashcraft, with his hidden troves of knowledge and uncorkable ebullience; Luke Plunkett, my night-shift partner in crime, who got me into Yakuza and whose stubbornly specific tastes inspired me to think harder about why I like what I like; Chris Person, a walking meme encyclopedia with an uncanny sense for visual gags; Seung Park, whose choose-your-own-Twitter-adventures I will be following well into next year; Tim Rogers, a gifted video game critic, genuine weirdo, and likely actual genius; Paul Tamayo, with untold layers beneath his affable and capable exterior; and of course, Stephen Totilo, about whom I could write another thousand words but, because I know he probably thinks this post has been too long already, I will instead just say is a mentor, friend, and probably the best boss I’ll ever have.

If you’d like to follow my work post-Kotaku, you can find me occasionally blogging at kirkhamilton.com and posting video game GIFs on Twitter. You can also listen to me, Maddy, and Jason every week on Splitscreen, which, come on, you should be doing that already. If you’d like to hear me talk about music, check out my new music podcast Strong Songs, which I recently launched and am very excited about. And if you’d like to hear the new music I’m working on, well, stay tuned.

To all of you who have read my work and engaged with it in any way over the years: thank you so much. Double thanks to all who have sent kind messages, shared my writing, or otherwise been supportive. It means more than I can say.