Marketed as the most complete Smash experience, with the most fighters, the best graphics, and the greatest quality-of-life updates, Super Smash Bros. Ultimate for Switch appears at face to be a no-holds-barred improvement on the series as a whole. Over the weekend, however, fans learned that there’s one crucial, and crappy, way Smash Ultimate falls in line with its predecessors: Its shitty design for online play. And this time, with the required Nintendo Switch Online subscription service, they’re paying extra for it.

[Update—12/14/18: Smash Ultimate received a patch last night that appeared to address a couple of our gripes with its online service. We have updated the article accordingly.]

As with Smash’s previous iterations, players whose internet is less than stellar appear to be subjecting their online opponents to some truly garbage lag. Smash is a fast fighting game, and Smash Ultimate is considerably faster than its two predecessors. Many of my games felt just as laggy as they did 10 years ago when I was playing Super Smash Bros. Brawl online on the Wii. And lag kills the experience. 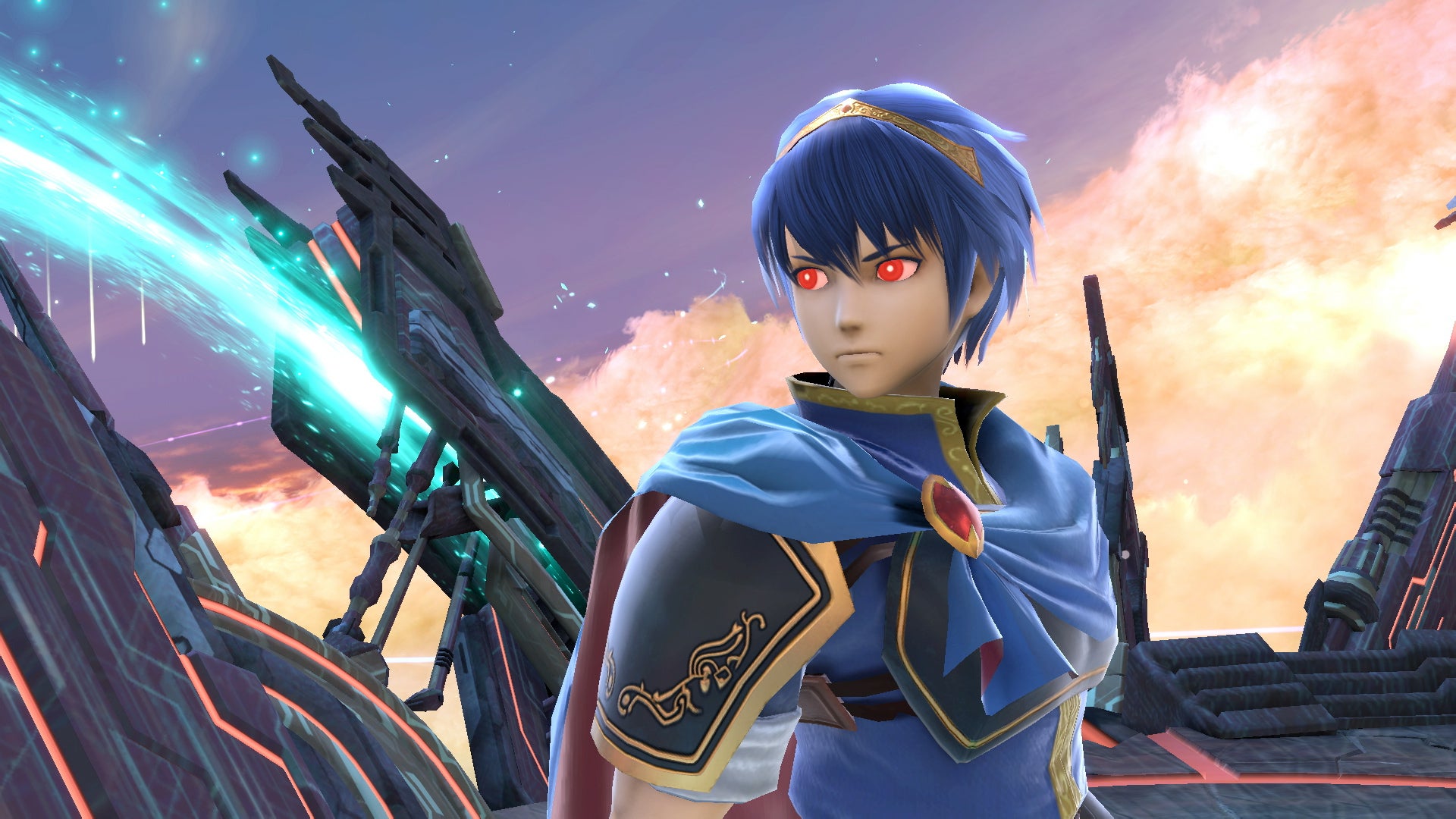 About a third of my matches are weighed down by this even though my own wireless speed is excellent. (I know because I tested it in the Switch’s settings menu.) I’m often matched against players who must be playing from a couch 300 feet underground in a deep, dank cave with the router sitting under a dripping stalactite. Sometimes, my fighter’s animation will pause for a full three seconds, which, in a fast Smash game, is completely unmanageable. Making matters worse, oftentimes, these internet-challenged opponents will play characters who spam projectiles, therefore forcing their opponents to play reactively and defensively in these laggy conditions. That’s just no fun.

Making your internet setup Smash-ready is tricky and expensive. On top of the initial cost of Nintendo Switch Online’s £18 yearly bill, players might want to purchase a wired LAN adapter for their console. A Nintendo-licensed one is releasing this week for £23.50, not cheap by any means, and it’s already pre-sold out in a lot of places. Smash director Masahiro Sakurai actually said that players should buy a LAN adapter in a Nintendo Direct last month. Upgrading to faster internet is an option, too, yet feels like kind of an extreme step just to play one video game, even if it’s as great as Smash. 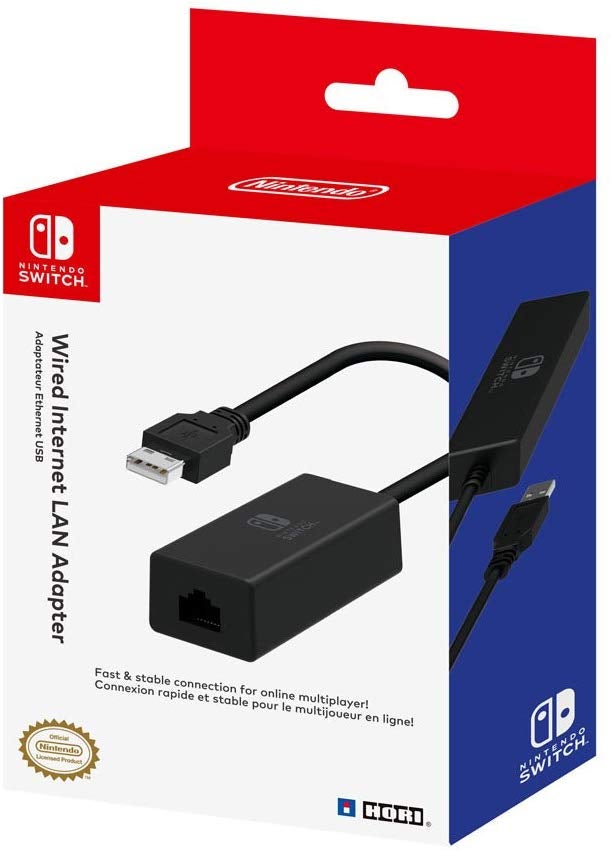 There are a few different ways to Smash online. Most familiar will be Quickplay, a mode where players can hop into a match against an opponent with an ostensibly comparable skill level. That’s measured by your Global Smash Power, a skill rating that goes up when you win and down when you lose. Gonzalo “Zero” Barrios, who was the best Smash 4 player, had a rating of around 783,000 a couple days ago. I’ve seen randos on Twitterwith scores much higher. These ratings don’t mean a lot right now, but at some point, after performing well enough, players can unlock “Elite Smash,” an “exclusive society of top-tier smashers.” Some people get it after a few dozen solo Quickplay wins and around 700,000 GSP, but others report a higher GSP threshold, like 900,000, and a varying numbers of games.

So far, I’m not finding that Quickplay is consistently matching me in the sorts of matches I’d prefer. It’s great that players can choose a preferred ruleset and that the game attempts to match you with players with similar skill and similar preferences. My preferences are to play one-on-one matches with two stocks on flat stages. Yet in practice, a sure third, sometimes half, of the Quickplay matches I enter into are four-player matches. Frustratingly, one match yesterday tossed me into a two-on-two match, with items on, all set on a complicated, notably non-flat stage. These four-player matches tend to suffer from more lag than my one-on-ones, too, making them even an even less welcome experience. [Update—12/14/18]: A Smash Ultimate patch last night claimed to make players’ preferred rules “more highly prioritised.” After spending some time with the game post-patch, I believe that the patch worked. Every game I played for over an hour was one-vs.one—a welcome change after a week of four-player madness.

I really hate how when I'm playing ELITE BATTLES I get FORCED into a FFA or TEAMS match (with items sometimes) even though it's clearly meant to be the competitive online mode and it doesn't give me the option to quit or leave (and if I do, I get banned).

Smash Ultimate is great but wtf is up with the online? Forcing you into random 4 player matches with items on when that’s the complete opposite of your preferred rules, and you can’t switch your character between games unless you play a whole new person?

Bring back For Glory

If you do manage to find an opponent who is at your skill level and doesn’t have crappy internet, it’s good to hold onto them and challenge them to a rematch. Unfortunately, choosing “rematch” means you can’t change your fighter. Even if they don’t agree. Seriously: If you ask an opponent to rematch, and they don’t accept, you’re still stuck playing with the same fighter for whatever the next match is.

To mitigate Quickplay’s randomness factor, players can choose to join a battle arena. Battle arenas are wrestling rings where, as players duke it out using one chosen ruleset, bystanders either sit in the spectator stands or tap their feet in the waiting area. Players can join their friends’ arenas, which is actually pretty fun, since you get to watch your friends battle. It’s also nice that you can be sure what ruleset you’re playing.

Here’s the thing about friends’ arenas: The only way to notify a friend you want to play with them is to contact them outside of the game with a text message or something. That’s even if you can see them online. Then, assuming that friend is actually down, you can either enter their arena once they make it, or make your own. If you want to play in a battle arena with friends online, but also with friends sitting next to you on the couch, you can’t, from what I can tell. When I tried to do this last night, we had to pass the controller back and forth, texting our online friends, “Hey, it’s James’ turn now” when we switched off.

Public arenas give players the option to queue up for matches with players who share ruleset preferences. Often, though, to actually get into one of these matches might necessitate waiting in a virtual queue for your turn: 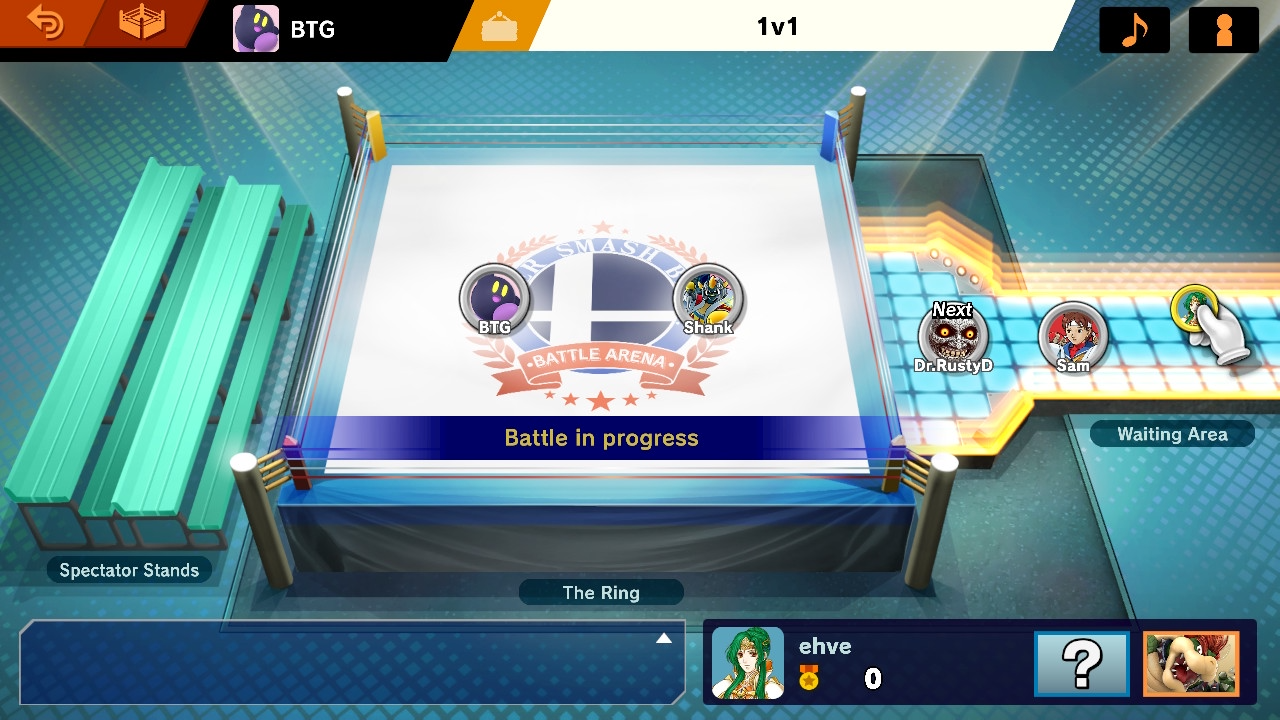 Not everybody is having a negative online experience with Smash. Yet enough people are complaining that the Smash Ultimate Reddit is deleting new posts about it and forwarding everyone with complaints into a single megathread. On the heels of Splatoon 2’s weird matchmaking system, which makes it very hard to play on the same team as your friend in some modes, and early complaints about Mario Kart 8 Deluxe’s connection issues, Smash Ultimate’s wonky online mode is just the latest in a succession of strange online multiplayer design decisions.