Assassin’s Creed Odyssey and Red Dead Redemption 2 are both big open-world games, and they both came out in October of 2018. Both involve a hero on a horse riding around and murdering lots of people. The similarities end there.

AC Odyssey is very much of its time. It’s an embodiment of the open-world game design ethos popularised over the last decade by its developer, Ubisoft, and it’s loaded with ideas that have been embraced by so many other open-world games that they now feel ubiquitous. In contrast, Red Dead Redemption 2 feels like it popped out of a pre-2010 time capsule or, perhaps more accurately, like it warped in from an entirely different timeline.

Since around 2012, more and more open-world games have adopted Ubisoft’s information-heavy, player-friendly style of open-world game design. In 2018, “Ubisofty” is a useful shorthand for describing a new open-world game. If you tell someone “Oh, you know, it’s basically a Ubisoft game,” you’re saying there is a big map full of colour-coded icons, lots of clearly marked collectables, repeatable and systematised side activities, and lots of progress bars to fill. In that context, Odyssey is a warm blanket of familiar video game tropes and concepts, while Rockstar’s game is strange and discomfiting.

Over the weekend, I decided to finally get back to my Odyssey playthrough. I’d spent the preceding week and a half marathoning Red Dead 2 in order to review it, and felt ready for a change of pace. I was unprepared for how thoroughly I had adjusted to Red Dead’s peculiar flow and rhythms, however, and found the transition back to Odyssey—a game that I love, I should say—more jarring than I’d anticipated.

I loaded up Odyssey and immediately noticed a small but instructive difference: like a lot of modern games, Odyssey includes gameplay tips on its loading screen. I hadn’t even loaded my save, and the game was already trying to help me out, explain itself to me, and maybe to push me to try new things. Red Dead 2’s wordless, evocative loading screens offer no such guidance. 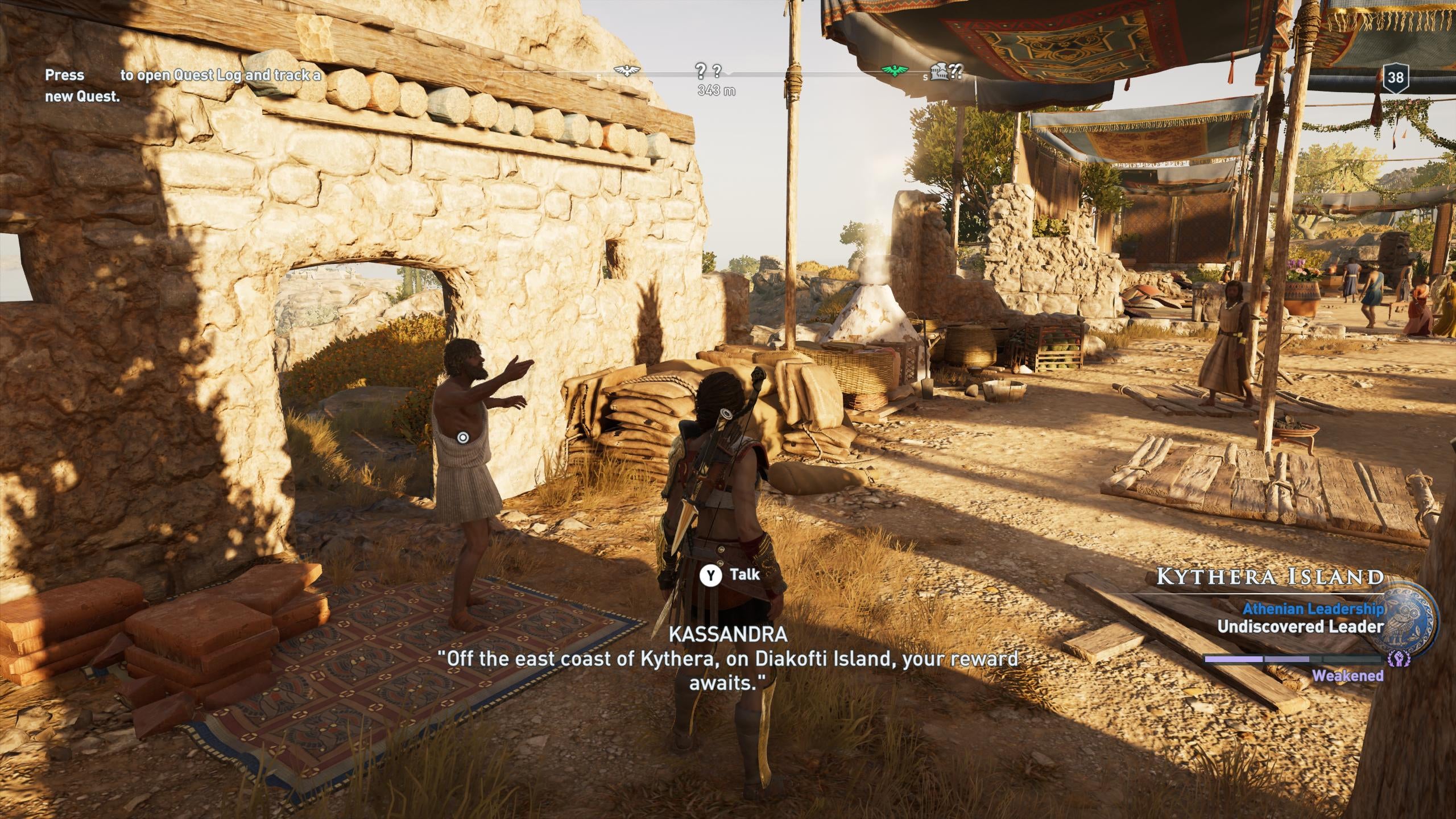 After dozens of hours with Red Dead 2’s stripped-down interface and general opacity, everything about Odyssey felt aggressively helpful. “Press start to open Quest log and track a new Quest,” a pop-up in the upper-left of the screen urged me. In the lower-right, a large indicator told me I was on “KYTHERA ISLAND,” which was under Athenian Leadership with an Undiscovered Leader. The leaders name had a purple progress bar beneath it, and the bar indicated that the current leadership was Weakened. On my compass were several question marks, a couple of viewpoints, and behind me, several exclamation marks indicating available quests. In the upper-right corner of the screen, the number “38” reminded me of my character’s level.

I played for a few minutes and the differences continued to pile up. Kassandra, my Odyssey protagonist, moved like a superhuman gymnast compared with Arthur Morgan, the plodding star of Red Dead 2. Kassandra’s horse, Phobos, controlled more like a Star Wars speeder bike than the idiosyncratic, free-thinking animals I’d been coaxing around in Rockstar’s game. I leapt up a wall and climbed to the highest point on a nearby fort, then dove to the ground, fifty feet below, and rolled into cover. (In Red Dead, I would have died after falling half that distance.) I pressed a button and was given a sweeping aerial view of the fort courtesy of my eagle companion Ikaros. I tagged every enemy in the base. I could now see them all through walls. 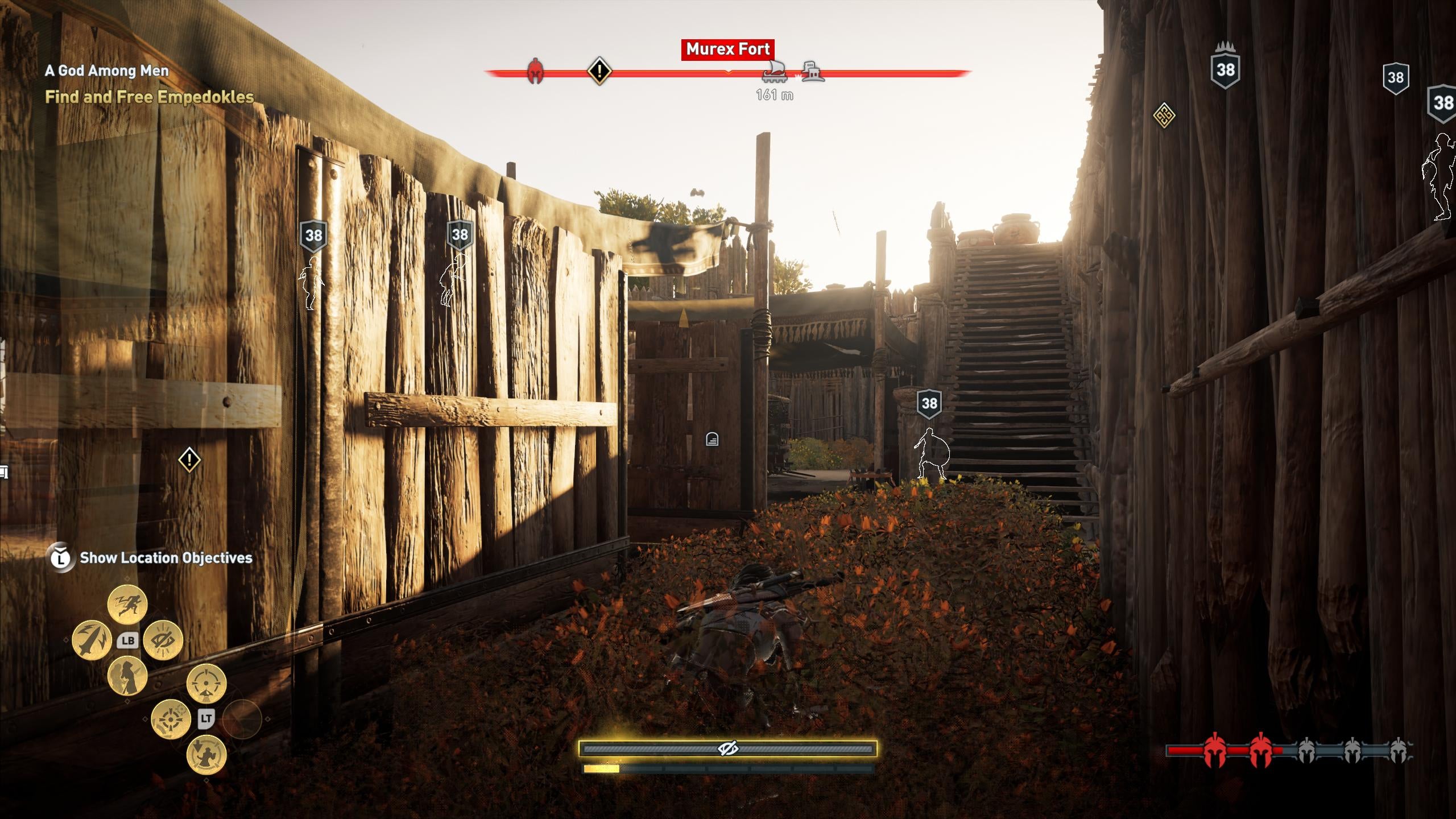 There is nothing in Red Dead Redemption 2 to compare with any of that. Everything in Rockstar’s game is slower, more deliberate, less empowering. It’s a quality that I talked about at length in my review: Red Dead 2’s snail-slow pace, convoluted control scheme, limited travel options, sludgy interactions, and hard-to-parse user interface all combine for an experience that is far more languid and cumbersome than most people have come to expect from open-world games.

Red Dead 2 rejects so many modern open-world game design mainstays that it almost feels like it comes from another dimension. Since Friday, I’ve been watching my colleagues, friends, and other Internet folks trying to get their heads around it, and have seen plenty of people understandably struggling to adjust. Red Dead Redemption 2 is not a welcoming game, and it has a tendency to resist and even buck the player like a mustang in the wild.

There’s a yawning chasm between what I think of as “Ubisoft open-world design” and the style of open-world design Rockstar has embraced with Red Dead 2. In the Ubisoft model, everything is laid out at the player’s feet. The game feels like a digital tool, or maybe an operating system. It’s full of menus and progress bars. Every activity fits into a larger, clearly delineated context: enemy outposts, sync points, caves, tombs, cities, leader homes, convoys, and so on. You always know precisely what you’re doing and where you stand. 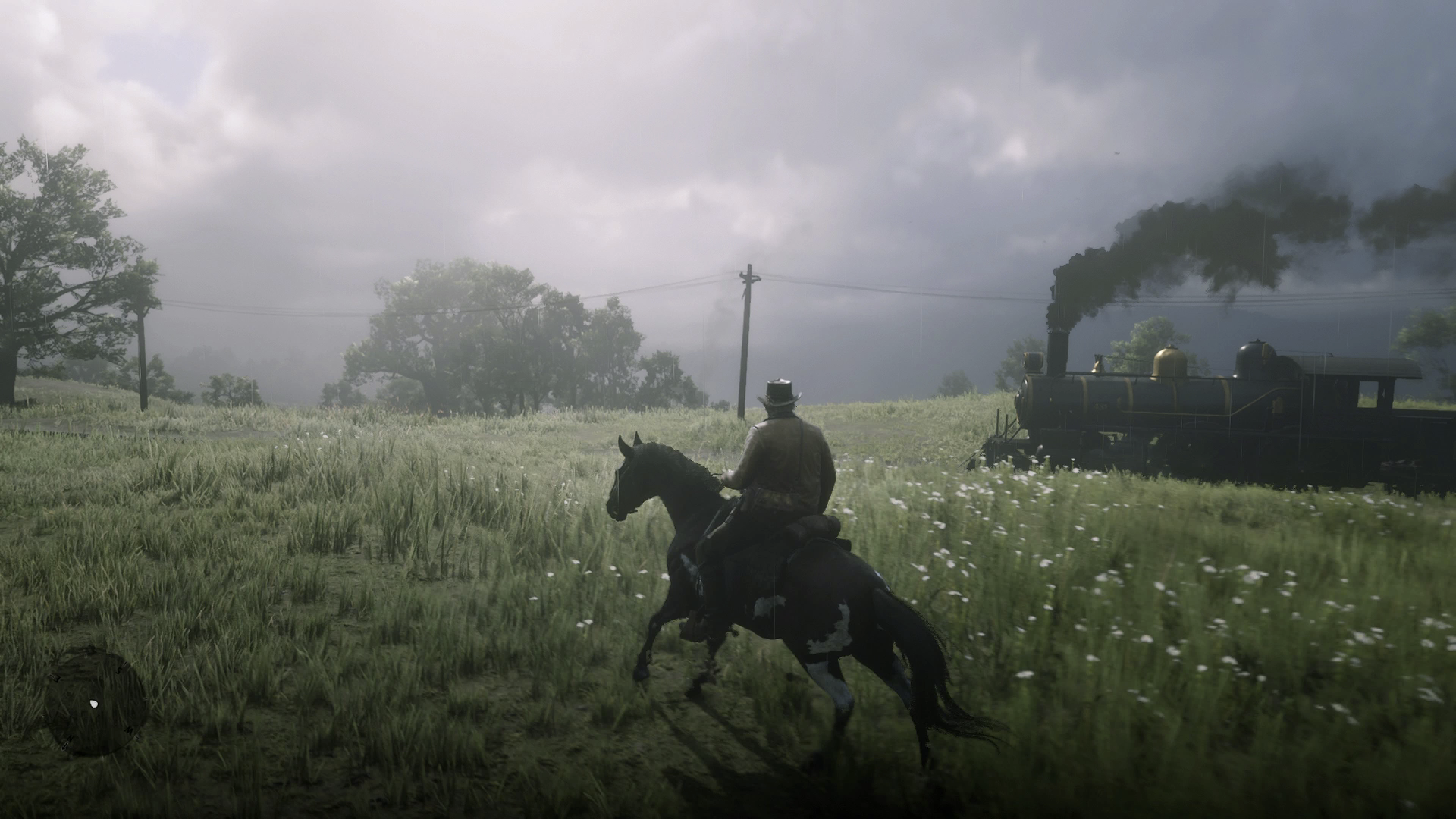 In comparison, Red Dead 2 is a black box. Most activities fit under one of a few broad categories—you can meet strangers, or clear gang hideouts, or track down one of five mysterious shacks, for example—but those activities are presented much more organically, as part of the game world. Almost every icon on the map simply designates a location: a post office, for example, or a butcher’s shop. Lots of items in the “total completion” menu are hidden with question marks until you find them on your own, after which the game will only hint at what they are. One entry is labelled “Dreamcatchers,” and enticingly instructs players to find all 20 dreamcatchers, note their locations, and “see what you think.” Arthur can level up his trio of core stats, but those levels are buried in a nest of menus and don’t have a huge effect on gameplay.

The two games also have wildly different pacing. Odyssey wants to get you to activities quickly and easily, the better to help you work your way through reams of forts, quests, targets, and missions. Red Dead 2 feels like a long, contemplative walk in the woods. In Odyssey, you can fast-travel to your ship or to any viewpoint just by opening the map. In Red Dead 2, you can only fast-travel after buying a camp upgrade, and you can only do it from your camp. Even that is presented as a cinematic montage of Arthur travelling by horseback.

Red Dead Redemption 2 shares a lot of things in common with 2010’s Red Dead Redemption, as well as with Rockstar’s other massively popular games. So why, in 2018, does the sequel feel so peculiar? In part, it’s because of the unusual diligence with which Rockstar has pursued the goal of grounded verisimilitude, even by the company’s own standards. But it’s also due to how pervasive the Ubisoft model has become in the eight years since the first Red Dead. 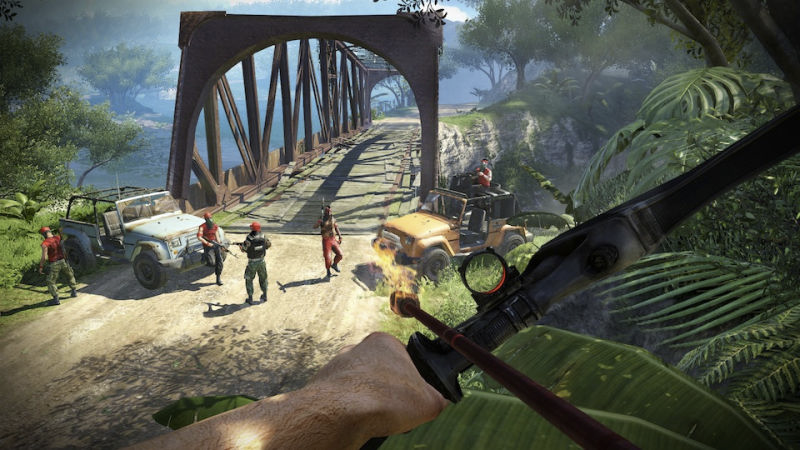 Ubisoft’s approach germinated and developed over the course of the first few Assassin’s Creed games, and arguably reached full fruition in 2012’s Far Cry 3. That game had it all: upgradable skill trees, viewpoints that unfogged the map, crafting tied to animal hunting, experience points that let you make your character more powerful, instant fast-travel to unlocked points on the map, and so on.

In the six years since then, Ubisoft’s many game studios have continued to iterate with subsequent Assassin’s Creed, Far Cry, and Watch Dogs games, though the overall formula has remained the same. During that same period of time, a bunch of open world games from other major studios began to borrow Ubisoft’s ideas, helping establish them as game design norms. Games influenced by the Ubisoft model include Mafia III, Horizon Zero Dawn, Spider-Man, Mad Max, Dying Light, Batman: Arkham Knight, Middle Earth: Shadow of Mordor, Shadow of War, and even role-playing games like Dragon Age: Inquisition and The Witcher 3. (There’s been some cross-pollination as well: The Witcher 3’s branching dialogue system and sidequest design turn up in Horizon and Odyssey, and Odyssey also shares a riff on Shadow of Mordor’s nemesis system.)

Those games are each distinct in their own ways, but they share many of the same core systems and design ideas. Moreover, each one broadly subscribes to the philosophy that activities should be easily sorted and organised, that players should be given as much information as possible, and that the game should be “readable” above all else. If there’s a stealth element to the game, players can usually tag enemies through walls to keep track of them. If there’s combat, colour-coded numbers often fly off of damaged enemies to indicate the effectiveness of attacks, and floating health bars indicate how each enemy is doing. 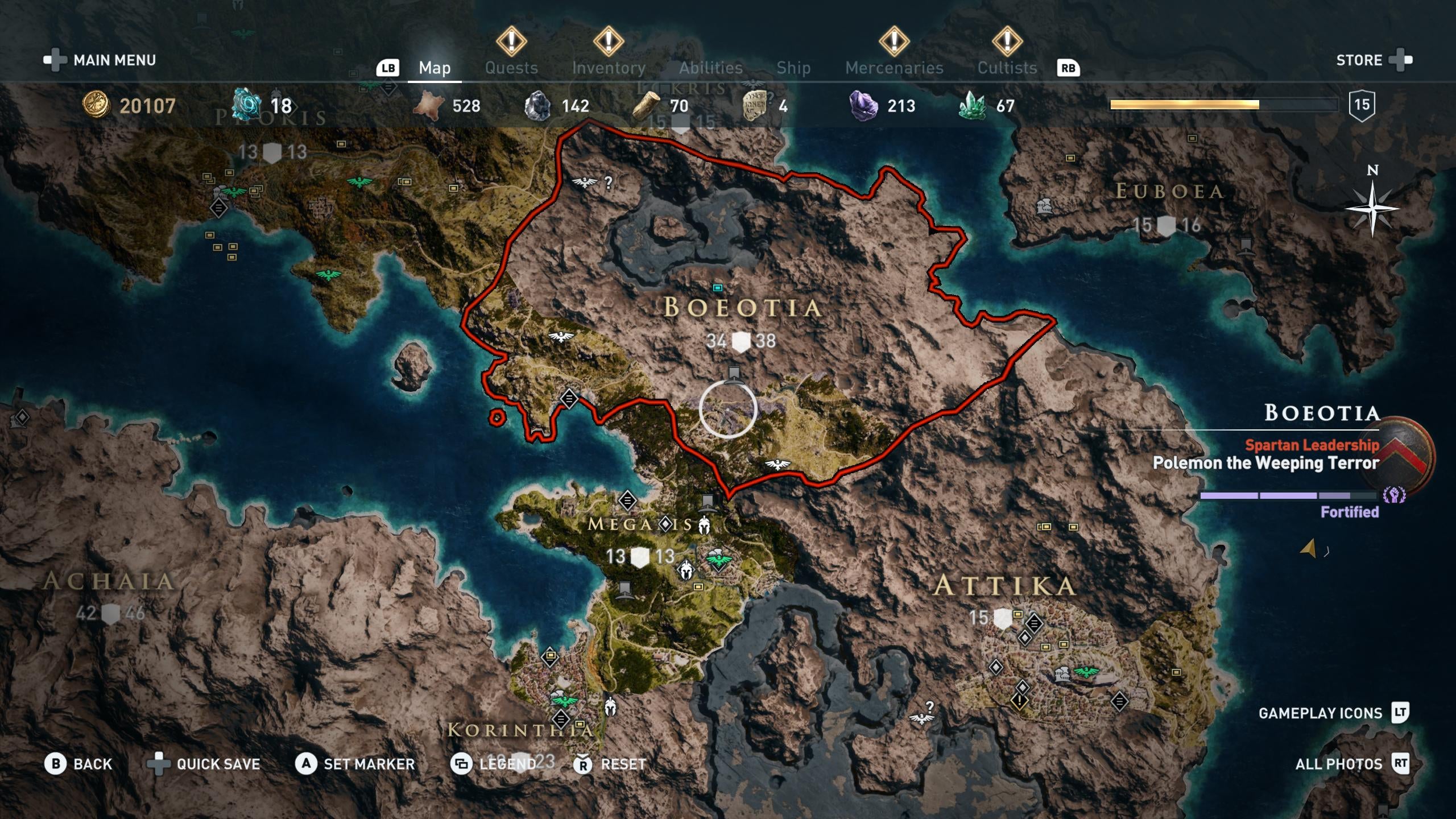 Like Odyssey, a number of modern games also arrange the map around a levelling system. Different regions are given differently levelled enemies, which funnels players through the world in a certain way.

Red Dead Redemption 2 does almost none of those things, which makes for a fascinating, distinctive experience. I find it appealing despite its evident flaws, and in a completely different way from something like AC Odyssey. As I put it in my review:

Unlike so many modern open-world games, Red Dead Redemption 2 does not want you to achieve dominance over it. It wants you to simply be in its world, and to feel like a part of it. It’s a crucial distinction, and a big part of what makes it all so immersive and engrossing. The thrill of playing Red Dead 2, like with many other Rockstar games, comes not from how fun or empowering it feels on a moment to moment basis. It comes from the electric sense that you are poking and prodding at an indifferent, freely functioning world.

Over the weekend, I joked on Twitter that Red Dead 2 comes from an alternate timeline where the strange, divisive Far Cry 2 was the Ubisoft game everyone copied, rather than the empowering, crowd-pleasing Far Cry 3. It was an oversimplification, of course; Red Dead Redemption 2 is different from Far Cry 2 in innumerable ways. But Rockstar’s new game is the most defiantly unusual big-budget open-world game I’ve played since Zelda: Breath of the Wild, which was itself one of the most unusual I’d played since Far Cry 2. Like Nintendo, Rockstar has proven uncommonly willing to throw out accepted game design conventions in service of a particular vision.

I generally enjoy Ubisoft-style open world games. I find them pleasing and easily digestible, and I like picking apart and appreciating the many small refinements that turn up in each new one. I like Red Dead Redemption 2 as well, but for different, occasionally opposite reasons. Not every open-world game needs to follow the same playbook, and there’s something to be said for major game developers resisting trends and taking chances. Despite how slow, frustrating, and just plain weird Red Dead Redemption 2 can be, I’m glad Rockstar’s designers were willing to so confidently do their own thing.