Yesterday, GOG, CD Projekt Red’s digital storefront, posted a tweet that included a hashtag that has been circulating to advocate for trans rights. However, the tweet was a promotional post about the storefront. The post was soon deleted, and today, the company explained the retraction. This is all familiar.

“Classic PC games #WontBeErased on our watch,” GOG tweeted on Monday. “Yeah, how’s that for some use of hashtags.” The “won’t be erased” hashtag became popular on social media following the New York Times’ reporting that the Trump administration in the US plans to roll back federal civil rights protections for trans Americans, opening the door for discrimination in areas like housing, healthcare, and employment. The hashtag has been used as a rallying cry for trans people and their allies protesting these harmful moves.

On Monday, GOG quickly took down the tweet and, this morning, issued a response. “Yesterday, we posted a tweet containing a trending hashtag as a pun. The tweet was neither intended as a malicious attack, nor as a comment to the ongoing social debate. GOG should focus only on games. We acknowledge that and we commit to it.”

GOG and CD Projekt Red’s social media accounts have sparked controversy before. On 17 July, GOG’s Twitter account posted a GIF from Postal 2: Paradise Lost of a headstone with the phrase “Games Journalism—Committed suicide August 28, 2014,” believed by many to be a reference to GamerGate. GOG also removed that tweet and followed up to clarify that they “failed to make the association between the image, the date, and an abusive movement. Our intention was never to hurt or condone hate.” 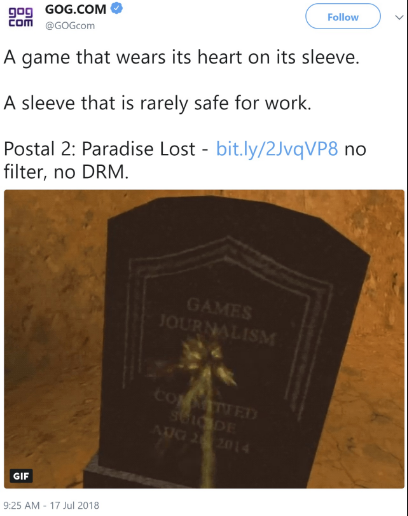 In August, the Twitter account for upcoming CD Projekt Red game Cyberpunk 2077 responded to a fan with the phrase “Did you just assume their gender?!,” which many fans interpreted as making light of trans issues. The company later apologised for that tweet, writing, “Sorry to all those offended by one of the responses sent out from our account earlier. Harming anyone was never our intention.”

All three of these instances follow the same pattern: clumsy jokes that are not quite aggressive or blatant enough to be seen as outright hateful, which are then quickly swept under the rug with an appeal to “intentions.” Maybe these posts are misunderstandings of hashtags or internet trends by a social media team that has a wide range of fans to reach. Maybe they’re intentionally hateful moves made by a person or people on the team.

I want to believe that whoever is tweeting does have good “intentions,” as each of the follow-up responses have claimed, and that there’s some obstacle on those intentions’ way from their brain to the page that can be moved aside with a bit of thought, or proofreading, or searching Know Your Meme before tweeting. But these repeated stumbles demonstrate that even if CDPR’s social team wasn’t purposefully being offensive, they don’t seem to be learning from their mistakes, or at least, not in a way that has yet been observable to the public.

These tweets don’t have to keep happening, and yet they do. And every time they do, CDPR’s follow-up plea about their intentions rings less true.

Having been out as trans for nearly two decades, I’m not all that bothered by any of these tweets. I’ve certainly seen worse. I don’t even think trans people are above being joked about; I know a tonne of hilarious and successful trans comedians. But every time this happens, it feels like one more reminder that at least one person who works at a company that makes things I like thinks my existence is funny, and that enough people there either agree or don’t disagree strongly enough to stop them. These tweets don’t have to keep happening, and yet they do. And every time they do, CDPR’s follow-up plea about their intentions rings less true.

Even if the company doesn’t intend it, CDPR’s tweets make me feel like their games, like so much of the art in this world that I love, aren’t for me. These posts say that however much I love The Witcher 3, however excited I am to play Gwent Homecoming, I’m not CDPR’s audience. Years ago, I wrote that when you consume media as a trans person, “at some point, everything you love decides to tell you it hates you.” In other words, eventually, an artist I admire or a TV show I like will voice an opinion about me, and it usually isn’t good.

GOG’s reference to Trump’s intended policies as an “ongoing social debate” position the company, whether intentionally or not, as people who believe my existence is a fact we can have differing opinions about. This turns games I like into another area where I have to think about how much I can overlook to enjoy something. These jokes, like many jokes about trans people, might not be intended to be hurtful; most people, I really believe, don’t wake up deciding to be cruel. But jokes about trans people, like so many jokes rooted in bigoted assumptions, tend to punch down. They draw lines between people; they rank people’s worth. You don’t have to do this to make good art, good games, or run a good company, and you certainly don’t have to do it over and over.

Years ago, Mystery Science Theatre 3000 writer Bill Corbett made a ill-conceived trans joke and subsequently apologised. It still stands as one of the best apologies I’ve ever read, saying in part, ”I want to stand on the side of humanity. I want to be humane, even when being a goddamned wise-ass. There’s no tried and true path through this, but it’s really worth trying to find it.” CDPR can have the irreverent, internet-edgy social media presence that it seems to want, or rather intends, to have. The team should be able to do it without kicking people in the process.